'No to BJP, But Yes to What?': Why Bengal’s Decisive Mandate Reflects Courage

Despite TMC's shortcomings, people chose a form of governance which has displayed political will in developing welfarist schemes, stood against communal polarisation, and expanded medical facilities during a pandemic. 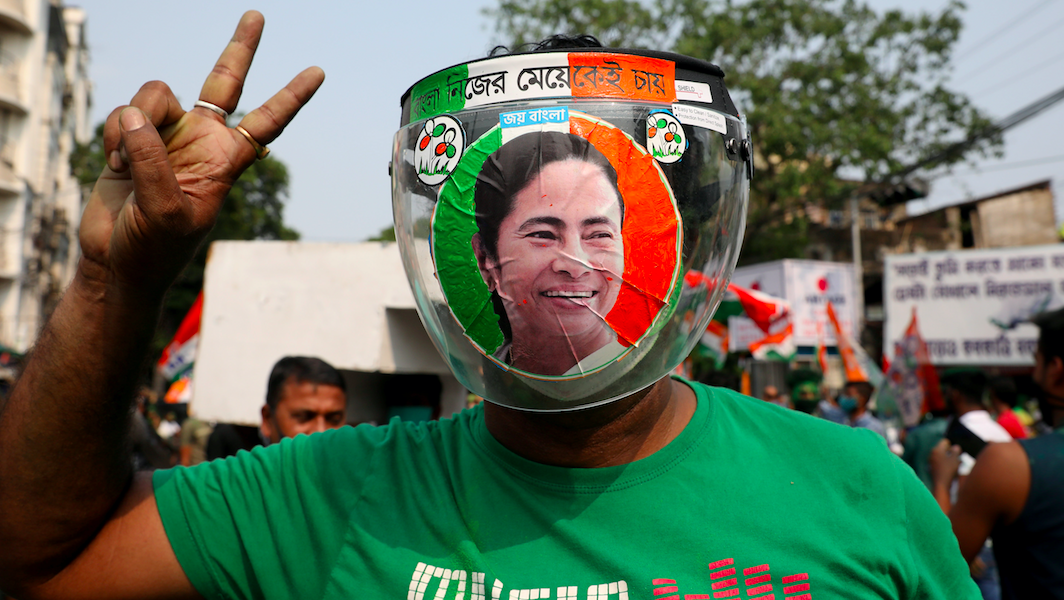 A TMC supporters celebrates on May 2, 2021. Photo: Reuters/Rupak De Chowdhuri

The Bengal mandate is inspiring, and it’s worth asking why. In the recent past, social life in Bengal has not been easy, to say the least. The political forces which determine, to a great extent, livelihood conditions, cultural expressions and aspirations for the future have been on a roller-coaster ride, unsettling the population since 2011, when the 34-year long rule of the Left Front came to an end.

The overwhelming mandate against the Left Front, and in favour of the Trinamool Congress, generated strange expectations. At some level, it seemed to be simply a mandate of freedom, to choose something other than what was given for all levels of life in Bengal, namely, the Communist Party of India (Marxist), and its ways of governing public life.

Be it amongst the urban or suburban middle classes or the rural populations, choosing the TMC over the Left Front did not signify the endorsement of any defined model, vision or logic of governance and development. It simply implied reminding oneself that certain kinds of rights, to dissent, to reject, to choose or to be autonomous, could be reclaimed by large populations.

Resistance against the Singur-Nandigram land-grab actions were initiated mainly by a combination of independent initiatives of heterogeneous groups, like students, activists, scientists, teachers, lawyers in the city and highly politicised peasants in the villages. As the discontent swelled, the TMC joined forces with these groups, eventually re-organising this resistance into electoral success against the Left Front.

Consequently, there was a general perception of openness about the upcoming regime: its personnel, policies, strategies and attitudes. Moving beyond the formulaic definitions of ‘left’, ‘right’, and ‘centre’, the 2011 moment in Bengal politics and people’s public lives offered possibilities of redefining these labels, and reimagining political formations typically associated with these classifications. Very soon, however, the moment seemed to be over. Two successive tenures of governance by the TMC put all such prospects, openings, hopes and claims under serious questioning and criticism.

The TMC-led government launched a huge range of welfare schemes for backward communities, and invested heavily in material and institutional infrastructure, but this entire field of ‘development’ also became a gigantic public kitty for corruption at all levels of the party. This became nepotism in the shrinking field of employment, as aspirants for school and college teaching, and administrative jobs in government departments struggled to break the corrupt networks of the party.

Corruption and control were joined with violence and authoritarianism, especially in the context of rural political life, as was experienced in the panchayat elections of 2018. People’s disappointment with the TMC came out clearly in the remarkable performance of the BJP in the 2019 Lok Sabha elections, where the latter triumphantly emerged as the greatest political opposition in the state by securing 18 out of 42 seats.

Bengal went to polls in 2021 with this background.

The BJP, we knew has moved from strength to strength, as its electoral fortunes swelled across the country. In Bengal, it attempted to remodel the political framework and culture, and offered an entirely different political and economic alternative in line with its national policies. From disinvestments of public enterprises, to constitutional amendments like the reading down of Article 370, and the passing of the Citizenship (Amendment) Act, to preparation of plans for the corporatisation of education in India in the form of the New Education Policy, to the building of the temple in Ayodhya, BJP projected itself as a new-age political force as against those which resisted any form of change.

Over the last five years, it successfully secured the support of a substantial section of marginalised communities, cutting across caste, class, gender and ethnicity. To top it all, it invested spectacularly in the mediatised representations of its presence, making its face Narendra Modi – an icon of unbridled aspirations, conspicuous consumption and total control.

The pitch of this campaign was unprecedented. Shah and Modi offered a dream to the people of Bengal, what they termed the ‘double-engine’ government, essentially implying the flooding of money into Bengal from two sources, the state and the Centre. The evidence of the power of money was palpable, as people saw great numbers of TMC, and even CPI(M) cadres and leaders turn to the BJP, as organisers, candidates and more. Everything seemed to be destructible, changeable, and saleable: the people saw and felt that money could turn all things to its opposite.

Bengal went to the polls in 2021 with this background as well. 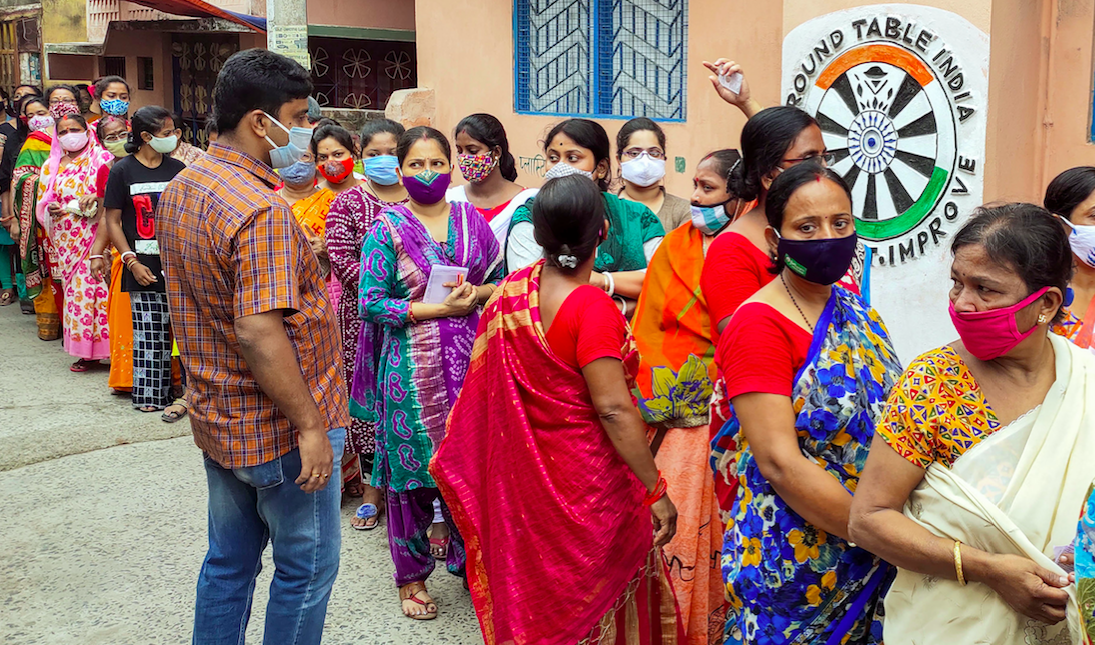 What does rejection of the BJP show?

The huge victory that the TMC secured by bagging 213 seats as against BJP’s 77 seats is significant not only because it means a strong rejection of a possible saffron Hindutva regime and consequent communal polarisations. But voting against the BJP meant taking a position against the perceptions and promises of riches and a better life, for a people who are fighting the miseries of unemployment and living for decades with the perception of being ‘trapped’ in a poor state, neglected by the central government. Voting against the BJP meant refusing the illusions and simulations of grandeur, as circulated in the rags-to-riches stories of an Ambani or a Modi, or in the promises of prosperity offered by Amit Shah as a self-identifying successful bania.

The rejection of the BJP showed that the professional middle classes were not seduced by the promise of full payment of better salaries to lakhs of government employees, who are paid almost half of their national counterparts due to the TMC’s refusal to pay the appropriate dearness allowances.

The decisive mandate in favour of TMC, and against the BJP throws light on a complex, courageous, and critical choice that the people of Bengal made in the 2021 assembly polls. Unlike 2011, here the people of Bengal were given an elaborately packaged and powerfully projected ‘alternative’, and they were, in any case, weighed down by failures of the existing regime. Beyond everything, they were, and still are struggling simply to live amidst a raging pandemic in a state which certainly needs a significant improvement of its medical infrastructure to combat this biological crisis.

Given the availability of an easy binary between suffering and hope, translatable as TMC and BJP, it is indeed thought-provoking that people’s voting choices reflected a more complex self-interpretation of their predicament.

Despite the high-decibel campaign, the TMC recovered votes of Adivasis and Dalits in several regions of Bengal, where they had lost the support of these social groups due to unbridled corruption by the ruling party.

Clearly, by voting for the TMC they did not choose ‘suffering’, nor did they refuse ‘hope’ by rejecting the BJP. In fact, it can be argued that there were people who resorted to this simple binary, quite understandably, and gave the BJP a considerable ground in this election. But those who chose the TMC also embraced certain forms of life. They accepted, despite the shortcomings, a form of governance which has displayed some political will in developing welfarist schemes for backward communities, in providing healthcare for the poor, in expanding its medical capacities during the pandemic, in taking a resolute position against communal polarisation, in speaking against privatisation of government assets, and, above all, in being amidst the people in moments of crisis.

Choosing these forms of governance and development, despite their corruption and lack of a ‘structural’ vision, against the seductions of the ‘better life’, is a difficult and bold choice to make in these dark and hopeless times.

The outsider Bengal perceived in the BJP was a ‘neoliberal-communal’ cocktail, which most of the ordinary people of the place, cutting across diverse ethnic affiliations, refused to drink. That is why lakhs of ‘outsiders’, like Biharis, Oriyas, Marwaris, Punjabis and others, voted against the BJP in areas dominated by ‘non-Bengalis’, even in this election where the leading slogan was “Bangla nijer meyekei chay”. This choice is surprising, inspiring and potent.

The votes against the BJP, and for the TMC, reflected a courageous ethical choice of countless ordinary people, for welfarism and diversity, made in inconsequential local settings, against the predatory national trends of precarious livelihoods and authoritarian political cultures. The future will no longer just be, taken over by the time of capital. The future in Bengal, and in Bengal’s India, might be on its way to become an unknown something, and this moment of critique has started making it.