With Nitish Kumar's departure from the NDA, a modern 'Triveni Sangh' – a caste coalition comprising the Kurmis, Kushwahas and Yadavs – could upset the NDA's apple cart in the Lok Sabha polls. 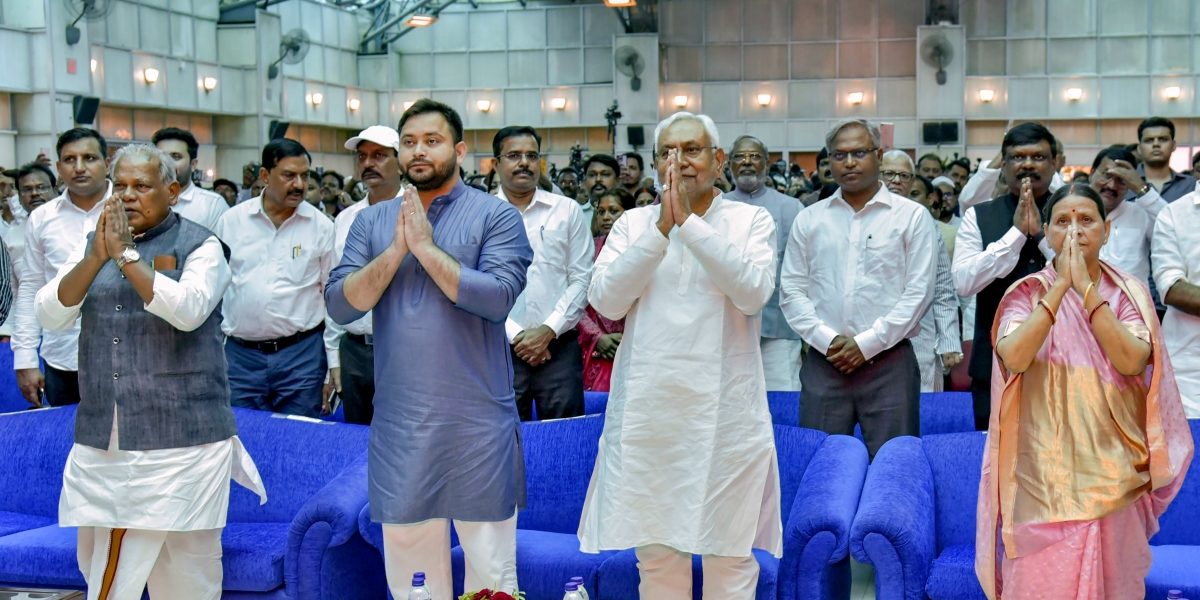 Patna: Politically speaking, Bihar chief minister Nitish Kumar stands nowhere in the race to be the next Prime Minister of India.

With his party, the Janata Dal (United), having only 45 MLAs in the state assembly and only 16 MPs in Parliament – that too, won in alliance with the Bharatiya Janata Party (BJP) – a politician can hardly dream of emerging as the number one challenger to the present incumbent, Narendra Modi.

But when analysed on a purely social plain, there is an argument to be made for Kumar coming up as a formidable player – if not as king, at least as kingmaker.

Most analysts are of the view that as a senior, active regional satrap in the Opposition camp, Kumar can certainly pose a challenge to the ruling BJP. They say that since Kurmis (the caste to which he belongs) have joined hands with the Yadav-dominated parties – the Rashtriya Janata Dal in Bihar and Samajwadi Party in Uttar Pradesh – Kumar has certainly broadened his appeal in North India.

But in doing so, these analysts tend to overlook another significant caste, the Koeris/Kushwahas/Mauryas, which has a strong numerical presence in several states in the northern part of the country.

What has been ignored is that in Bihar, the Kurmis and Koeris (better known as Kushwahas) are treated like the two sons of Ram, Luv and Kush. Their voting patterns, too, are identical in the state.

This alliance evokes memories of the ‘Triveni Sangh’, a coalition formed by these three castes some 90 years ago. At the time, these three intermediate castes had come together in their struggle against the landlords.

One can also not ignore the fact that the JD(U)’s parliamentary board chairman is former Union minister Upendra Kushwaha, who in March, 2021, merged his Rashtriya Lok Samata Party with Kumar’s JD(U). Further, JD(U) state president Umesh Kushwaha is another Koeri leader.

It must be noted that these three castes had a strong presence in the Socialist and Communist (and even Naxal) movements from the 1960s-90s. Further, they have several sub-castes (Dhanuks, for instance) which associate themselves with Kurmis and Kushwahas and vote in accordance with them. But these small castes are not a part of the Other Backward Castes (OBC) category; they fall in the category of Most Backward Castes (MBC), also known as Extremely Backward Castes (EBC).

In Uttar Pradesh, the percentage of Kurmis is higher than in Bihar, as is the case with Kushwaha or Maurya voters. When combined with the Yadavs, the three castes account for more than a quarter of the state’s votes.

However, this alliance could not be leveraged during the assembly elections in Uttar Pradesh earlier this year, despite Swami Prasad Maurya having crossed over to the Samajwadi Party. Since Kumar was still part of the National Democratic Alliance (NDA) in Bihar, the triumvirate’s vote was divided because of the Kurmi factor. The vote of the largest Kurmi party in the state, the Apna Dal, also got split. While the faction led by Anupriya Patel, one the daughters of Apna Dal founder, the late Sone Lal Patel, was in alliance with the BJP, the other faction sided with the SP.

If Kumar were to assume a larger, national role, he could certainly woo a large section of both Kurmis and Kushwahas in Uttar Pradesh to the Opposition’s side.

These three castes have substantial shares in the populations of Madhya Pradesh, Jharkhand, Chhattisgarh and Gujarat too. But the problem is that the non-Congress Opposition parties have no formidable leader from these three castes in these four states. The Congress, however, has a Kurmi chief minister in Chhattisgarh, Bhupesh Baghel.

The Kurmis of Bihar and Uttar Pradesh associate themselves with the Patidars of Gujarat and many of them use ‘Patel’ as their surname. If they were to strike up an alliance with the Congress, which still has a substantial presence, the united Opposition can certainly threaten the monopoly of the well-entrenched BJP.

This had happened in 2004 when the immensely popular Atal Bihari Vajpayee lost to the Congress-led alliance, which yielded extremely good results in Bihar and Uttar Pradesh. The supremos of the RJD and SP, Lalu Prasad Yadav and Mulayam Singh Yadav, respectively, played a crucial role in it. Apparently, Sonia Gandhi was no match to Vajpayee, yet she was able to upset the NDA’s apple cart.

Kumar and company can also bank on another group of castes in North India – the fisherfolk, which constitute the Nishads, Sahnis, Gangotas, Chaiyeens, Kewats, Mallahs and so on. Together, they form a strong social group which the BJP has alienated recently in Bihar.

Following the Uttar Pradesh assembly elections, the BJP’s Bihar unit was able to woo all three MLAs of the Vikassheel Insan Party (VIP), which is led by Mukesh Sahni, also known as the ‘Son of Mallah’. Thereafter, the BJP pressured Kumar into dropping Sahni from his cabinet in retaliation for the latter working against BJP candidates in Uttar Pradesh.

After inducting the three VIP MPs into the BJP, the saffron party emerged as the single largest party in Bihar, going from having 74 MLAs in the assembly to 77. However, the RJD responded by inducting four of the five MLAs of the All India Majlis-e-Ittehadul-Muslimeen, taking its count from 75 MLAs to 80 and giving it the title of the single-largest party.

The BJP’s move infuriated Sahni. In the Bochaha by-election held in April this year, BJP candidate Baby Kumari lost to the RJD’s Amar Paswan by a big margin of over 36,000 votes. And this happened while the JD(U) was still in alliance with the BJP. Now that the former had crossed over to side with the RJD, Congress and Left parties, the scenario had changed further.

Amar Paswan is the son of the late Musafir Paswan, another VIP MLA who had died a few months before the party was swallowed up by the BJP. The RJD was quick to give ticket to him from Bochaha, a seat reserved for SCs that has a substantial population of Sahnis or Nishads.

In Uttar Pradesh, the Nishad Party is in alliance with the BJP. However, it cannot be forgotten that it was none other than Mulayam Singh Yadav who first gave a Lok Sabha ticket to Phoolan Devi, the dacoit-turned-politician of this caste. So, if the backward caste combination emerges strong in 2024, the shift in Nishad votes to this side cannot be ruled out. As Kumar has the potential to emerge as a strong leader of the backward castes of North India, he can repeat what Lalu and Mulayam did in 2004.

Trinamool Congress (TMC) supremo Mamata Banerjee has also made her prime ministerial ambitions known, however, the problem with her is that she has a negligible social base outside her state, West Bengal. So like the Left Front in 2004, the TMC can also contribute in the defeat of the BJP by supporting the Opposition from outside.

However, much depends on the Dalit vote after the weakening and split of the Lok Janshakti Party (LJP) and Bahujan Samaj Party (BSP). Both Lalu and Kumar, as well as the Left parties, have some sway over them in Bihar. But nothing can be predicted about them in Uttar Pradesh as BSP chief Mayawati still has some hold over her Ravidas caste, which forms about 13% of the state’s population. The remaining 7-8% of Dalit votes are up for grabs.