With Nitish Engaging With Non-BJP Leaders, is a Mega Mahagathbandhan on the Cards?

It is clear that the Bihar chief minister aims to create a strong atmosphere against Narendra Modi and his dispensation in the run up to the Lok Sabha elections. 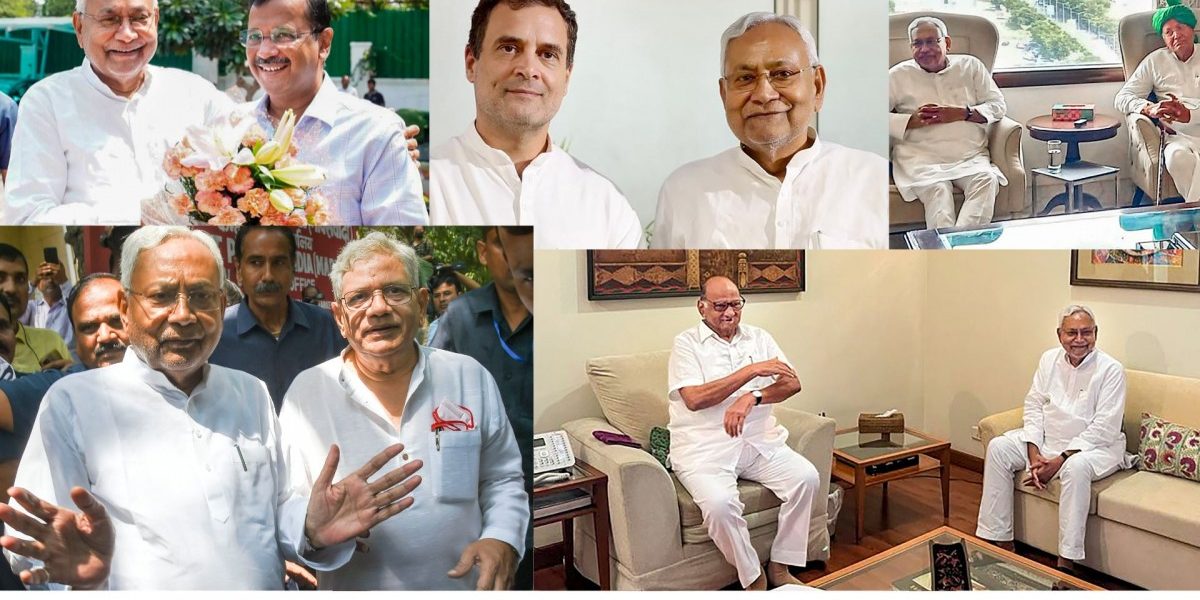 (‘On the soil of Hind, O Firaq, Caravans from all over the world kept coming, and so was Hindustan made’).”

Firaq Gorakhpuri’s immortal verse tells the story of how Hindustan became the cradle of diverse races, faiths, ethnicity and languages via the arrivals of Aryans, Huns, Kushans, Saks, Mongols, Turks, Afghans, Christians, Muslims, Zoroastrians and others since time immemorial.

The poem is a paean to inclusivity and it seems apt to quote it in the context of the moves that Bihar Chief Minister Nitish Kumar has been making since his party left the Bharatiya Janata Party (BJP)-led National Democratic Alliance last month and joined the Mahagathbandhan or Grand Alliance of seven parties in Bihar.

Rather than seeking preferential treatment for himself and his Janata Dal (United) [JD(U)] party, Nitish appears to be working to bridge the differences between non-BJP parties in an effort to unite them.

For instance, Nitish met Congress party leader Rahul Gandhi with as much warmth and bonhomie as he did the Aam Aadmi Party (AAP) convener, the Delhi chief minister, Arvind Kejriwal, and the Samajwadi Party (SP) leaders Mulayam Singh Yadav and Akhilesh Yadav. He shows no sign of acknowledging the reported bitterness between the AAP and the Congress or the SP and the Congress. Instead, he seems to be trying to smoothen their relationships in the context of the 2024 Lok Sabha elections.

Nitish began this task on September 5, when he met Lalu Prasad Yadav, the Rashtriya Janata Dal (RJD) supremo and the “spine” of Nitish’s strength in the changed scenario. Lalu is ailing now, but alert and cognisant of political developments.

After the new Mahagathbandhan government won the trust vote in the Bihar assembly last week, Nitish reached out to parties in the south of India as well and welcomed his Andhra Pradesh counterpart K. Chandrashekar Rao to Patna on August 31.

Nitish has also met the Nationalist Congress Party chief Sharad Pawar – another tall leader trying to unite the opposition parties. In the next few weeks, he is likely to meet the Shiv Sena chief and former Maharashtra chief minister Uddhav Thackeray, his West Bengal and Andhra Pradesh counterparts Mamata Banerjee and Jagan Mohan Reddy and other non-BJP leaders in the south. 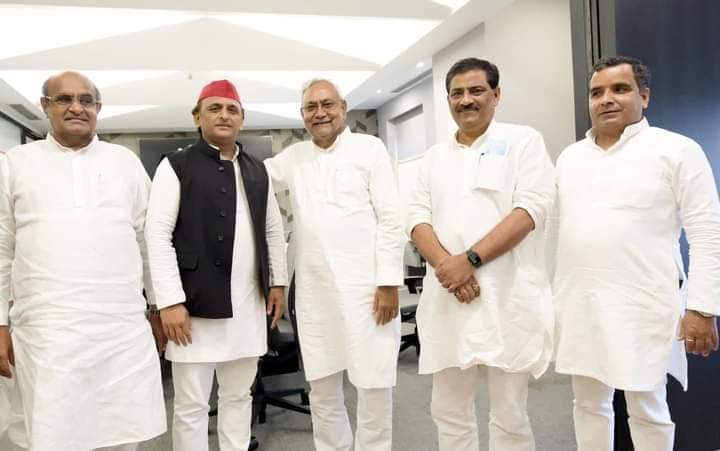 Unlike the other chief ministers – including Mamata, Kejriwal and KCR – Nitish shows no interest in presenting himself as the legislative leader of a united opposition.

To underline the fact that he has no interest in moving to the national capital, he had a resolution passed in the national executive meeting of the JD(U) on September 3, stating precisely what he tells reporters when they ask him yet again if he plans to head the opposition if it unites.

It is not in Nitish’s nature to name Prime Minister Narendra Modi as his opponent, but the Bihar chief minister has made his intention very clear. He is on a mission to defeat Narendra Modi and has focused on this task the way Arjun, in the Mahabharata, focused on the eyeball of the fish his arrow needed to strike in order to win Draupadi’s hand in marriage.

Politics is about building a certain narrative and a certain atmosphere that reflects a contesting party’s ideology. The 2024 Lok Sabha elections are still nearly two years away and it would be naïve to make any predictions about their results at this point. But Nitish Kumar is aiming to create a strong atmosphere against Modi and his dispensation in the run up to the 2024 elections.

Since meeting the leaders of the opposition parties, Nitish has mostly been talking about issues like employment, the country’s economic downturn, the open communalism of India’s right wing, the tyranny of dictatorship and the subversion of the common people’s rights. In doing so, he has created a powerful narrative against the BJP. He also focuses on his own narrative and never reacts to anything Modi says or does. 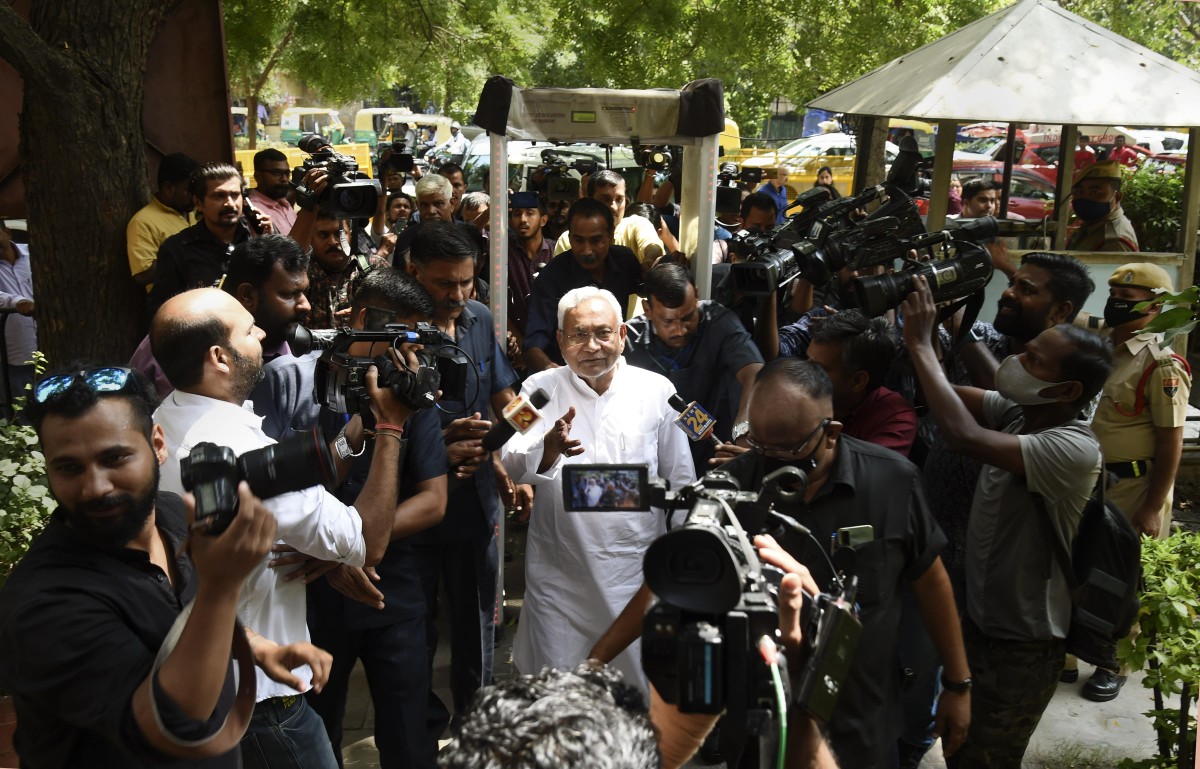 This means that the BJP, particularly in Bihar, is beginning to feel the heat. Before Nitish deserted the right wing party, BJP leaders had sounded “sure” about a victory in 2024. Now, they seem nervous.

“Jo kuchh bhi ho, hum log to Sangh ke sipahi hain…Nitish Paltu Ram hain, Kursi Kumar hain, unke khilaf ladengein (whatever the circumstances, we are committed to the Sangh Parivar’s ideology. Nitish is a Paltu Ram and a Kursi Kumar. We will fight him),” a senior BJP leader told me on the condition of anonymity.

The BJP leader’s words lack creativity. The phrases ‘Paltu Ram’ and ‘Kursi Kumar’ (which mean someone who constantly switches direction and someone who always has his eye on the throne, respectively) had been coined by Lalu Prasad Yadav in 2017 when Nitish had deserted the Mahagathbandhan that his party had joined for the 2015 assembly elections and returned to the National Democratic Alliance. That BJP leaders resort to Lalu’s words to describe Nitish shows their lack of innovation because there has been no love lost between Lalu and the saffron party ever since the BJP’s inception.

In 1990, Lalu Prasad Yadav, then the chief minister of Bihar, had had Nitish by his side in the undivided Janata Dal party.

Nitish, who was known as the architect of many of Lalu’s moves, had organised a huge rally at Patna’s Gandhi Maidan after Lalu had the then BJP president L.K. Advani arrested for entering Bihar on his Ram Rathyatra. This rally was attended by the then West Bengal chief minister Jyoti Basu, the then CPM general secretary Harkishan Singh Surjeet, the Communist Party of India leader A.B. Bardhan, the Haryana patriarch Devi Lal, leaders from south India such as S.R. Bommai and M. Karunanidhi, and many others.

The 1990 avatar of the Janata Dal had worked in an inclusive manner by accommodating and respecting the diverse ideologies of various parties against the exclusionary politics of the BJP. Even then, the saffron party had been using the term “pseudo secular” as a slur against non-BJP parties, alleging that the other parties were ‘appeasing’ Muslims for their vote.

After Nitish left the Janata Dal, he maintained a strong alliance with the BJP and served as Bihar’s chief minister in coalition with the saffron party for many years. But by June this year, it appeared that the right wing regime’s open “othering” of India’s minorities in the name of cow protection, love jihad and terrorism had become too much for him.

When Nitish joined the Mahagathbandhan last month, India’s opposition parties glimpsed a possible take down of the BJP across the country and the people of India began to hope for a secular atmosphere once again.

Nalin Verma is a senior journalist, author and professor of journalism and mass communication at Invertis University, Bareilly, Uttar Pradesh