There is proof that the combination of Lalu and Nitish is deadly for the BJP in Bihar. But can the JD(U) leader prop up the opposition's plan to take on Narendra Modi in 2024? 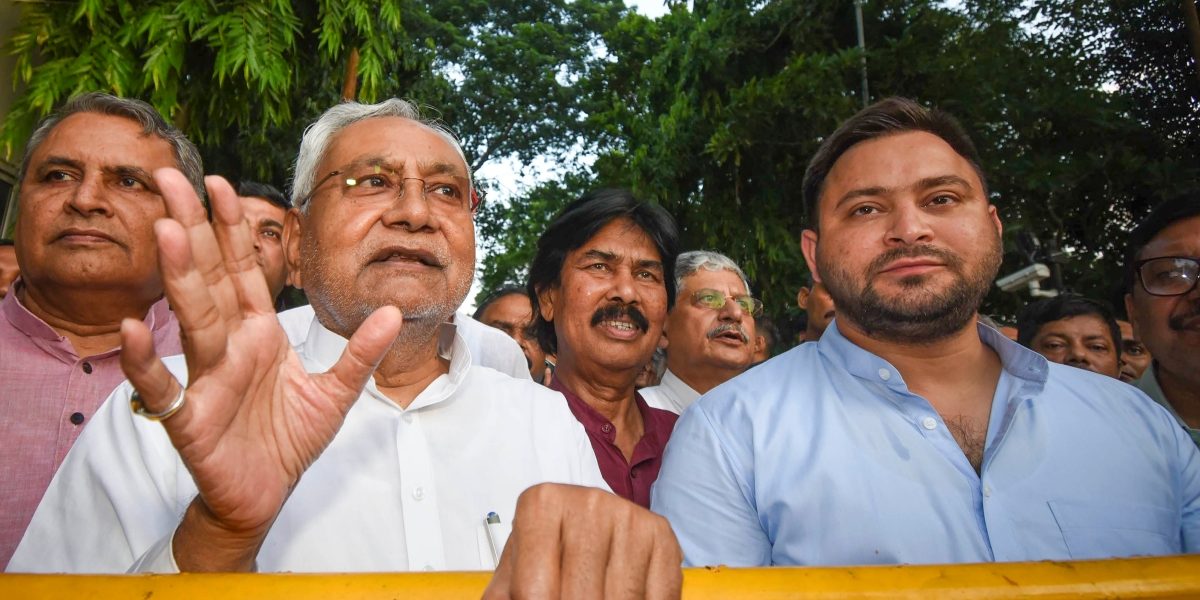 Patna: Though pushed to the wall and depleted in strength, Nitish Kumar has called the Bhartiya Janata Party (BJP)’s bluff and dumped it, paving the way for the return of the Mahagathbandhan (grand alliance) government in Bihar under his stewardship once again.

In the process, the wily Bihar chief minister has thwarted the saffron party strategists’ alleged game to play the Eknath Shinde card in Bihar through R.C.P. Singh, a close aide of Nitish until his resignation from the Janata Dal (United) [JD(U] last month. In the process, Nitish has also potentially put a hurdle in Prime Minister Narendra Modi’s plans for re-election for the 2024 Lok Sabha elections.

In a quick turn of events on Tuesday, Nitish convened a meeting of his party legislators and announced the breakup of the alliance with the BJP. Simultaneously, the leader of the opposition in the state assembly, Tejashwi Yadav called a meeting of his legislators and announced his party’s support for Nitish. The Congress and the Left parties – CPI-ML-Liberation, CPI and CPM – too did the same.

Nitish met governor Phagu Singh Chouhan and communicated his decision to leave the NDA and resigned as the CM. Subsequently, he called on his predecessor, Rabri Devi, and escorted her son Tejashwi to the governor’s residence.

“Our party colleagues and friends desired that we should leave the BJP’s company. I have abided by their sentiments,” Nitish told reporters near the Raj Bhavan. Asked about his decision to go back to the NDA in 2017, he said, cryptically, “That was a mistake, forget about it.”

The new ‘Mahagathbandhan’ – consisting RJD-JDU-Congress-Left – together have 164 MLAs in the 243-member state assembly. This is an almost two-thirds majority, comfortably more than the number required to form the government. The RJD is the single largest party with 79 MLAs followed by the BJP with its 77 MLAs.

After the 2020 polls, the JD(U), the BJP and the Hindustani Awami Morcha (Secular) of Jitan Ram Manjhi had 124 MLAs against the 122 required to form the government in the 243-member Bihar House.

While Nitish has been elected as the leader of the Mahagathbandhan and staked a claim to form the government, it might take a few days to formalise the other processes, such as the swearing-in of new ministers and distribution of portfolios. What seems clear for now is that Tejaswhi will be the deputy chief minister once again and ministers from the Grand Alliance’s parties will be accommodated in proportion to their numerical strength. 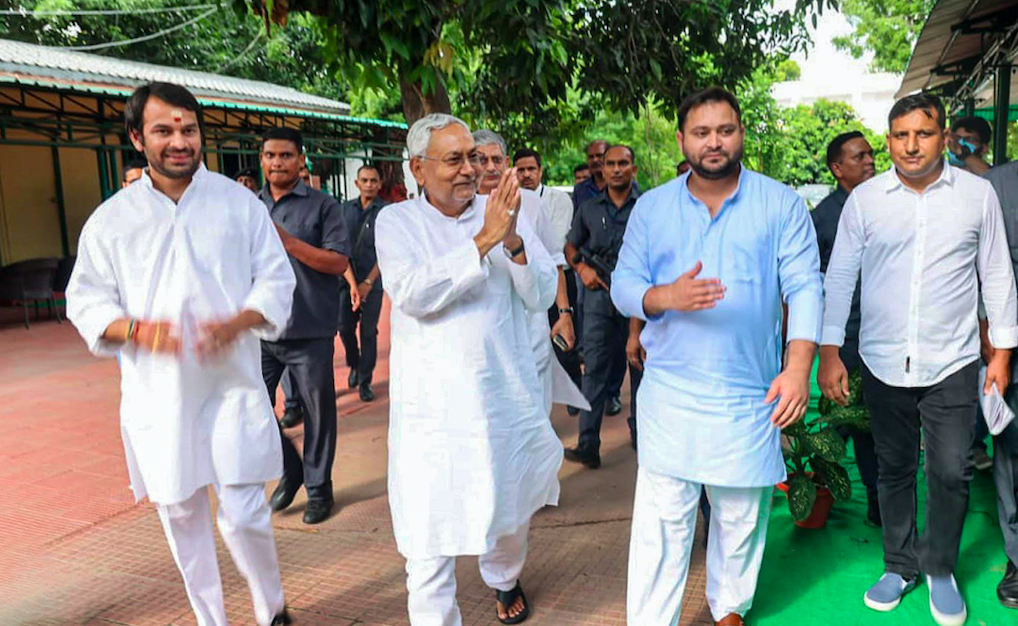 What triggered the split?

Differences between the JD(U) and the BJP were getting sharper, particularly after Nitish’s party was reduced to 43 MLAs against the BJP’s 74 in the 2020 assembly elections. Prime Minister Modi and home minister Amit Shah made concerted efforts to undermine Nitish.

First, they replaced Sushil Kumar Modi and Nandkishore Yadav as ministers – with whom Nitish was comfortable – and selected Tarkishore Prasad and Renu Devi selected as Nitish’s deputies. They allegedly reported to Shah directly and ignored the CM. The BJP’s decision to choose Vijay Kumar Sinha as the speaker also did not sit well with Nitish.

There were occasions when Nitish resented the BJP’s brazen Hindutva agenda, but the Modi-Shah combine did not care. For instance, Shah kept repeating that he would implement the National Register of Citizens (NRC) – despite opposition from Nitish, who with the help of the RJD ensured that a resolution against it was passed in the assembly.

Tarkishore Prasad declared the controversial film The Kashmir Files as tax-free without consulting Nitish. Vijay Kumar Sinha used his position as the speaker to defend his party cadres in Lakshisarai, who were caught violating the COVID-19 norms at festivals – for which Nitish admonished Sinha in the House to the surprise of all.

Nitish braved all these machinations by the BJP. What apparently goaded Nitish to split ties was the BJP’s “ploy” to use R.C.P. Singh like Eknath Shinde and Jyotiraditya Scindia were in Maharashtra and Madhya Pradesh to encourage defections.

“We have evidence that the BJP was using RCP to split our party,” the JD(U)’s national president Lallan Singh alleged, which the party’s parliamentary board chairman Upendra Kushwaha also backed up.

In a way, R.C.P. Singh reinforced this belief by repeatedly attacking Nitish – his mentor – and praising Narendra Modi. Perhaps, Nitish had sensed RCP’s designs well in advance and denied him a third term in the Rajya Sabha.

While the BJP has repeatedly encouraged defections to topple governments or weaken other parties in Maharashtra, Madhya Pradesh, Goa, Karnataka and some northeastern states, Nitish – a veteran leader who first became a Union minister in 1990 – was never going to be easy prey for Amit Shah. Perhaps Shah underestimated Nitish and overestimated himself in Bihar’s context.

Also Read: How Nitish Kumar Remained a Politician in Firm Control of His Image

That Lalu Prasad Yadav and Nitish Kumar have joined hands once again should worry the BJP. There is concrete evidence to suggest that the Lalu-Nitish combination is deadly for the BJP in Bihar. The two leaders are towering figures in the state and enjoy a strong social base. While Lalu’s RJD enjoys the support of the Yadav and Muslim (MY) communities – which together constitute over 31% of the state’s voters – Nitish is the undisputed leader of the non-Yadav other backward castes and the extremely backward castes.

Unlike in Uttar Pradesh and Madhya Pradesh, where the BJP has made inroads into the OBC and Dalit communities, the saffron party’s reach doesn’t go beyond the upper castes in Bihar. These communities constitute hardly 13% of the state.

The grapevine has it that by 2024, Nitish will pass on the baton to Tejaswhi and will move to parliament to stay relevant in non-BJP politics. Reports also suggest that the relationship between Lalu and Nitish remains relatively stable. They had become friends when they were student leaders and grew under the tutelage of Jayaprakah Narayan. They also share a personal chemistry which others can’t figure out. Perhaps, Lalu’s release from jail enabled Nitish to directly get in touch with bade bhai (big brother) and accelerate his break up with BJP. 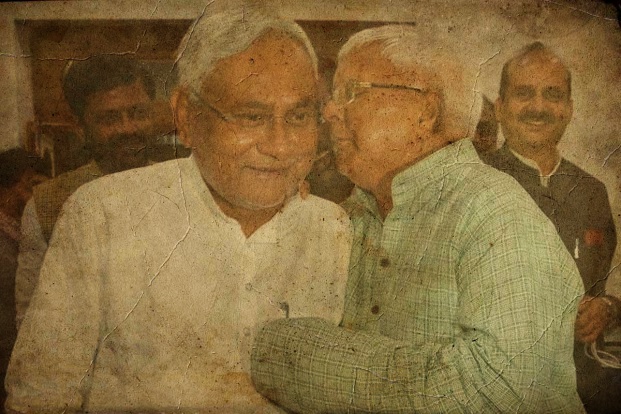 Among the flurry of developments, Tejashwi Yadav’s development into an astute politician needs to be noted. Tejashwi, who was Nitish’s deputy in 2015, has learned the ropes of politics quickly. He had reacted angrily and lost his cool at times after Nitish dumped the Mahagathbandhan in 2017.

However, with the passage of time, he was measured in his speeches and approach to the issues. Like his father, he kept the BJP as the focus of his attack and banked on social issues like employment, price rise, health and education against the BJP’s brazen Hindutva agenda.

He oversaw the RJD’s excellent performance in the 2020 polls despite Lalu’s absence. After Nitish attended the RJD’s iftar party and got Tejashwi on board on the issue of caste census, Tejaswhi toned down his attack on the Bihar chief minister and worked meticulously with him behind the scenes to ensure the JD(U)’s split from the NDA.

There is every indication to suggest that Nitish’s return to the Mahagathbandhan this time will be long-term. And in the process, opposition parties across the country will have a strong and articulate operator to take on the BJP in the 2024 Lok Sabha elections. Just ask former prime minister H.D. Deve Gowda, who said the developments in Bihar signal the possibility of a good alternative for the nation.