The Bihar chief minister has brushed away possibility of an NRC in the state. So why did his party support the CAA in parliament?

After a studied silence, Nitish Kumar has said a terse “no” to implementation of the controversial National Register for Citizens (NRC) in Bihar, becoming the first NDA chief minister to dump the proposal that Union home minister Amit Shah announced would be implemented all over India.

His words, spoken in Bihari-laced Hindi —“Kahe ka NRC; Bihar mein NRC lagu nahin karengein (‘Why NRC? We won’t implement NRC in Bihar’)”— aim at puncturing the intensity with which Amit Shah declared to implement NRC at a national level.

His Janata Dal (United) supported the Citizenship Amendment Bill (CAB) — which has become Citizenship Amendment Act after presidential assent — in the parliament, fuelling differences in the ranks, with election strategist and party vice-president, Prashant Kishore and general secretary and author, Pavan K. Varma dubbing the move as having gone against JD(U)’s secular ideology and also against the of the spirit of Constitution that doesn’t allow discrimination on the basis of religion.

Following a bout of contradictory statements made by Prashant and cadres, including some lawmakers from the minority community and JD(U) leaders in Rajya Sabha and Lok Sabha, Ram Chandra Prasad Singh and Rajeev Ranjan Prasad alias Lallan Singh, Prashant met Nitish to discuss the issue. Emerging from the meeting, Prashant clarified that JD(U), in consistency with its old stand on the NRC, was indeed opposed to it.

“The chief minister will elaborate on the issue once he was over with the Jal Jeevan Hariyali yatra on December 20,”  he said.

The Bihar CM in the course of his Yatra at Gaya on December 19 said while addressing a public meeting, “I guarantee the safeguard of the interests of minorities in Bihar. Nothing bad will happen to them as long as I am around.”

Then, on December 20, emerging from a meeting of the Indian Road Congress at Patna, Nitish said, “Kahe ka NRC…”

Then why the CAA?

Now the question has arisen as to why his party supported the CAB in parliament?

Has Nitish accepted that the CAA which stipulates Indian citizenship to non-Muslim minorities from Pakistan, Afghanistan and Bangladesh is non-discriminatory or in accordance with the spirit of the constitution? Was the JD(U)’s parliamentary party’s support to the then CAB a “tactical” political move on a given day in a given situation or was it a part of Nitish’s ideological commitment to the principles of socialism, secularism, equality and justice, as enshrined in the preamble of the Constitution?

These are the questions awaiting answers and only Nitish can answer them. And given the track record and operating style of Nitish Kumar, it will be hasty and also foolhardy to accept that he would simply “surrender” his principles at the altar of saving or retaining his position as chief minister. Nitish might have his share of fallacies and shortcomings as a player in power. But compromising on the principles and yielding to blackmail are not among them.

Veteran socialist leader and national vice-president of the RJD, Shivanand Tiwary who has worked with Lalu Prasad and Nitish Kumar both for over four decades said, “The Bihar CM is being blackmailed”.

Quoting Pavan Varma and Prashant Kishore, Tiwary said, “Nitish had opposed the CAA in the internal meeting of his party in his 45 minute speech but his party supported it in the Lok Sabha”. 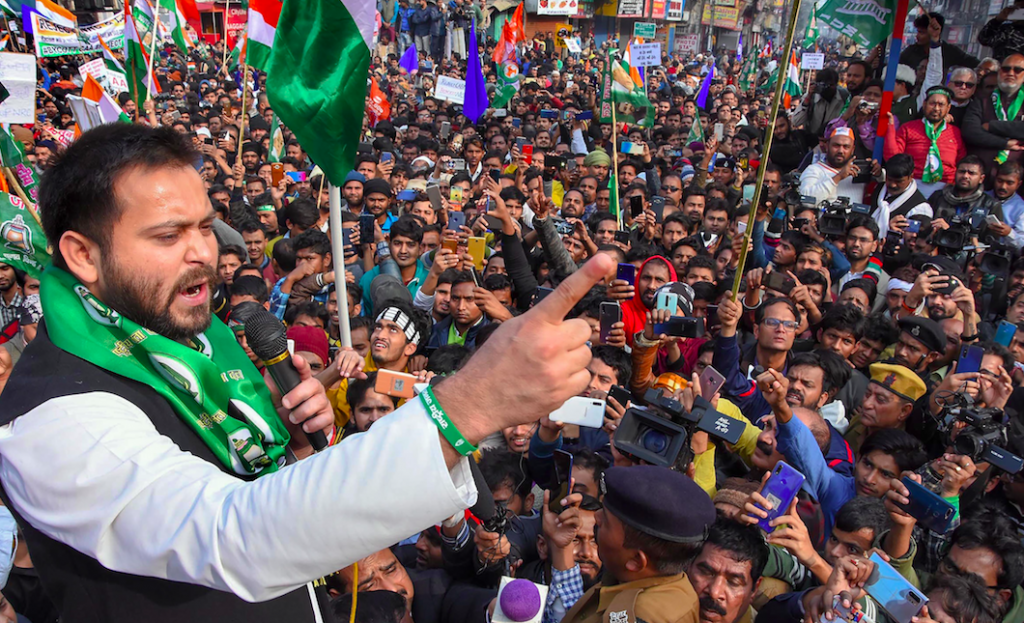 Though Shivanand is an old guard in socialist politics, for a neutral observer, it will be unfair to Nitish and his party to accept what a key leader of the RJD — a prime political opponent of JD(U) on Bihar’s turf — says. Shivanand might as well have taken care of political correctness in the context of his own RJD to issue such a statement.

But the fact remains that secularism and socialism have remained as inseparable from Nitish’s political philosophy as water from milk, despite him running the government with the BJP for almost 18 years, excluding his yearlong stint with RJD. He has not allowed his secular image to be dented yet.

It is known to all that he is extra conscious about his image. In such a situation, it will be hasty to derive that he or his party has supported CAa, succumbing to “blackmail” or “pressure” from the communal brigade that seems to dominate the policy making in the BJP government at the Centre.

It is better to wait for Nitish — known for speaking in measured words — to explain his position on December 20 onwards rather than what all and sundry are saying. There are reports coming in the media that he has shifted his strategy and decided to leave out Muslims who constitute over 16% of Bihar voters and gel with the BJP’s strategy of polarisation. They are too simplistic, given the fact that Nitish is a deft player in the game of political intricacies.

The first thing he did after joining hands with the BJP in Bihar in 2005 was opening the case of the infamous 1989 Bhagalpur riots, punishing the culprits and paying pension to the victims of the riots on the lines of the Sikh victims of the 1984 pogrom after Indira Gandhi’s assassination.

His reign with the BJP has registered sharp growth in the number of madrasas in Bihar and its teachers are getting salary on the line of the seventh pay commission. His government has fenced most of the Muslim graveyards in the state. His party — its legislative wings and cadres—have proportionate representation of Muslims. In fact, the JDU has as many cadres from the minorities as the RJD, Congress or Left have. It was on the initiative of Nitish that the Aligarh Muslim University opened its centre at Kishanganj.

Needless to say, the RSS-BJP may not have liked Nitish’s proactive initiatives for minorities. He has stayed steadfast on his stand on the Uniform Civil Code, Article 370 and Ram Mandir-Babri Masjid land dispute.

With the chief ministers of Bihar, Kerala, Bengal, Odisha, Punjab and Chhattisgarh now opposing the NRC, it is evidently clear now that the Centre would find it hard to implement NRC in large parts of India. In such a situation, Amit Shah and his likes might be trying to use it as just the political tool that can keep the communal cauldron boiling for political gains.

Watch out for Nitish with patience.