In an enviable position where the BJP cannot afford to let him go but where the RJD and Congress would both love to have him in their ranks, the Bihar chief minister has once again emerged unfazed. 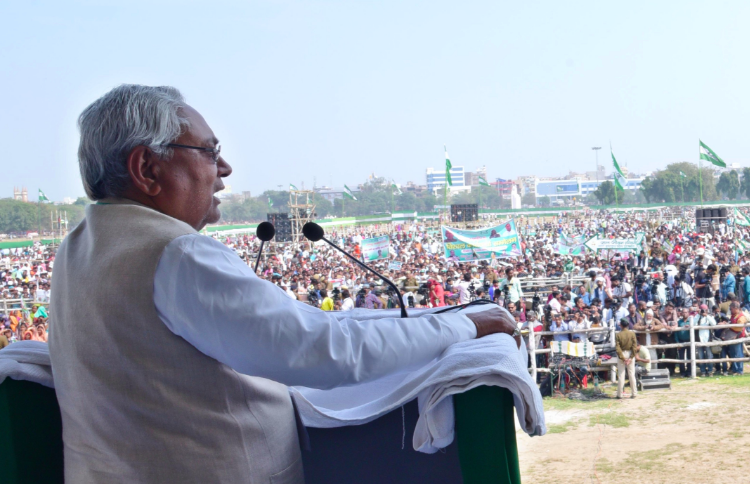 Patna: Early summer’s mild sun spreads its glow. A balmy breeze wafts through the electric fountain in front of the Raj Bhavan and reaches 1 Aney Marg — the colonial era mansions that house the Bihar governor and the chief minister respectively.

In a way, Nitish Kumar ruled Bihar in relative calm — sandwiched between the blood curdling sagas in Uttar Pradesh and the National Capital Region in the west, where Amit Shah led the Hindutva brigade, and Bengal in the east, from where Mamata Banerjee returned the fire.

The Bihar chief minister’s political wizardry has at no other point been on fuller display. It has de-capacitated the BJP from flexing its Hindutva muscle in Bihar, calmed down an otherwise bitter RJD scion in Tejashwi Yadav and improved his trust levels with the Congress and Left.

Nitish, it must be remembered, has been battling the heaviest shadows on his socialist-secular image ever since he rejoined the NDA with the BJP under Narendra Modi-Amit Shah’s stewardship. But in what looks like a turn of fate, the Bihar chief minister seems to have, suddenly, recovered what he had lost after getting a unanimous resolution against the National Register of Citizens and the new National Population Register passed in the ongoing Budget session of the state legislature.

He did it in style.

Insiders in the RJD admitted that even at the time when the Assembly come together at 11 am on February 24, they had no clue that Nitish would move the resolution against the NRC and NPR in the House.

“We too had not guessed, at all, that he (Nitish) — running the government with us — would do something that was opposed to our party manifesto. By the time we figured out what was happening and how we should react, the game was over. We ended up voting for the resolution that went against the letter and spirit of our manifesto,” remarked a BJP leader loyal to the Modi-Shah camp.

Also read: How Nitish Kumar Made the BJP Vote for an Anti-NRC Resolution in Bihar

Even as his action’s caught the BJP napping, Nitish disarmed Tejashwi, tempering the RJD scion’s vitriol by accepting the latter’s proposal for adjournment motion against NRC and NPR and affectionately admonishing him in the House. “Your father (Lalu Prasad) has got the right to say whatever he wants to say against me. You have no such right. Chup ho jao, baith jao (Be silent, sit down),” Nitish said, reminding, in a way, that he was contemporary to Lalu and Tejaswhi should maintain decency.

Tejaswhi who was repeatedly referred to Nitish as “paltu-Ram” in the language of his father, suddenly calmed down. “Nitish ji is our guardian,” he said and profusely congratulated Nitish on his birthday, wishing him a “long and happy life.”

Nitish is suddenly in an enviable position.

Badly drubbed in the Delhi and Jharkhand elections and faced with grim battle against the fierce fighter that Mamata Banerjee is in Bengal, BJP needs Nitish more than ever, to stay in power in Bihar.

The RJD, meanwhile, has opened its door for Nitish.

“Nitish ji had won in alliance with the RJD in 2015. We will welcome him back if he comes back to the grand alliance,” said the RJD’s senior general secretary, Raghuvansh Prasad Singh. The Congress too wishes Nitish was with the party. The Left parties are not critical of Nitish, who significantly paved the way for Kanhaiya Kumar to carry out his Jan Gan Man Yatra in Bihar against the NRC, NPR and CAA.

Almost nine months before of the Assembly elections due in October-November in Bihar, it seems to be a foregone conclusion that Nitish will stage a comeback for the fourth consecutive term. Even his diehard opponents admit that Nitish is likely to retain his position as the chief minister again.

“It doesn’t matter whether he is with the BJP or the RJD-Congress, he will become the chief minister for sure. It is upon him to decide which alliance he chooses to be in. He is acceptable wherever he wishes to go,” said Ratan Singh, owner of a printing press in Patna.

The deputy chief minister, Sushil Kumar Modi rejected all speculation about Nitish leaving or sidelining the BJP. “Take it from me: The BJP-JDU alliance is based on trust and long term plan to carry out development in Bihar. There is no confusion, whatsoever, in the DNA. Nitish is the leader of NDA in Bihar and he will continue to be so. The partners will share the seats amicably and smoothly when the time comes. The RJD which has been a symbol of anarchy for years is trying to create confusion which will never work”.

Curiously, while the RJD-Congress-Left are ready to welcome him, there is a sense of disquiet in the BJP camp.

The BJP leaders who were singing more in tune of with Amit Shah and vomiting venom against the minorities are ill at ease. They apprehend that Nitish who will be in the vanguard of the NDA campaign might sideline them. Many in the BJP fear that Nitish might prevail upon the BJP brass to not give tickets to the ‘incendiary’ elements in the party. Suddenly, the likes of Giriraj Singh and Ashwini Choubey have fallen silent for fear of inviting Nitish’s wrath.

Also read: No NRC in Bihar, But NPR to Be Updated, CM Nitish Kumar Reiterates

The Nitish government has reserved 30% seats for women in jobs and local bodies.

Nitish’s JDU had its workers rally at the Gandhi Maidan on February 29. The local Hindi dailies and digital media focused on its size. Many of them described it as a “flop”. But they missed the larger story.

Nitish didn’t talk too much about his ally, the BJP. “The NDA is united. We will win 200 seats,” is what he said while reeling off the statistics on what his government had done in the last five years.

He said that his government had fulfilled all its electoral promises; the most important among them was supplying electric power to every home in the power-starved state. He promised water to every piece of farmland in the state. There is little reason for the people not to believe Nitish for he has, by and large, fulfilled his electoral promises and has, steadfastly, kept himself free from emotional harnessing — the mainstay of the BJP — and also the demagoguery in which the Prime Minister, Narendra Modi indulges in, off and on.

Moreover, it was the JDU’s workers meeting in which only the dedicated party workers were supposed to be present. It was not a mass rally of common people.

Political pundits have not been talking much about the result of the assembly elections in Bihar. They talk more about what Nitish will do in the next four or five years.

Watch out for Nitish Kumar, for his left hand doesn’t yet have an inkling of what his right hand can do.

Nalin Verma is a senior journalist and author of Gopalganj to Raisina: My Political Journey and The Greatest Folk Tales of Bihar.