Stray cattle wreak havoc on the lives of the people of Rae Bareli by destroying their crops and causing road accidents. 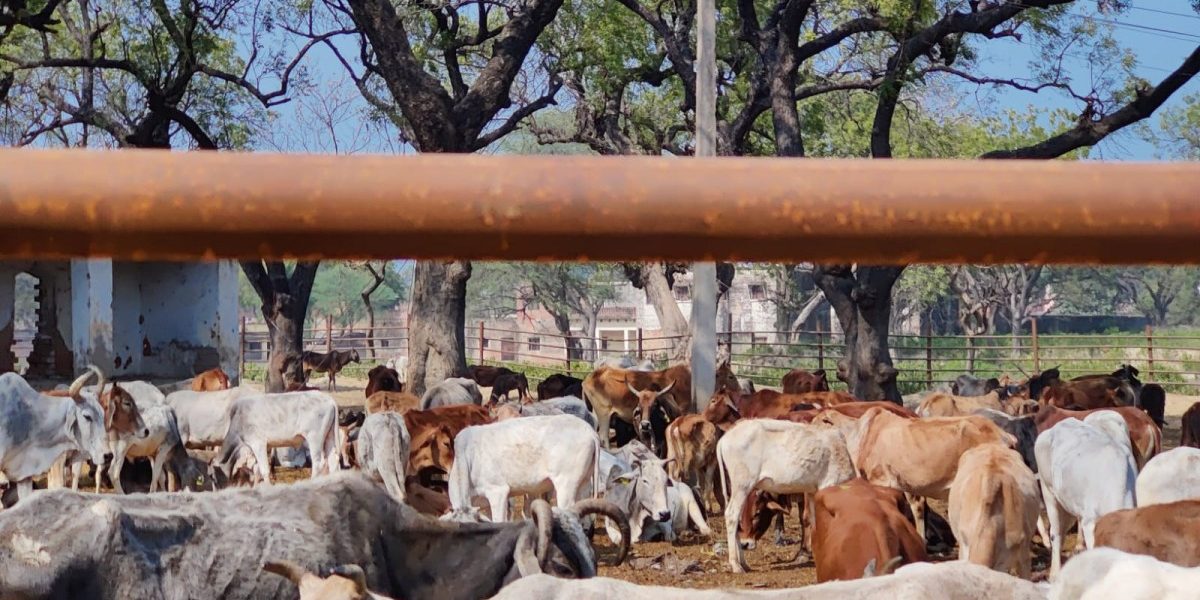 Thousands of cows are packed into the makeshift shed, looked after by only ten caretakers. Photo: Ismat Ara/ The Wire.

Rae Bareli: On Monday, February 21, Uttar Pradesh chief minister Yogi Adityanath held a rally in Rae Bareli’s Harchandpur in which he urged supporters to vote for the incumbent Bharatiya Janata Party’s (BJP’s) ‘double-engine’ government in both the Centre and the state.

Chant’s of ‘Jai Shri Ram’ reverberated through the crowd as Adityanath invoked the name of Lord Ram and the BJP’s long-standing mission of constructing the Ram Mandir in Uttar Pradesh’s Ayodhya.

The BJP has never before won an assembly seat from the Harchandpur constituency, which falls within the Lok Sabha constituency of Rae Bareli and from where Congress leader Sonia Gandhi is the sitting MP.

Harchandpur goes to polls in the fourth phase of the assembly elections in the state, on February 23. BJP supporters waving the party’s flag at the rally in Harchandpur. Photo: Ismat Ara/ The Wire.

However, the people of Rae Bareli have a more pressing problem on their minds: the havoc wreaked by stray cattle in the region.

The high numbers of stray cattle have been causing frequent road accidents in the region. When reaching the village, a local warned this reporter about a mota saand (large bull) that frequents a nearby road and has overturned many vehicles crossing through the region.

What’s more, villagers have been complaining that these stray animals often wander into their fields and destroy their crops. In the nearby Sarini village, one farmer is even said to have lost his life while staying up at night and keeping a vigil to protect his crop from destruction.

This is hardly one Kilometre away from Raebareli’s Sataon, where UP CM @myogiadityanath is going to hold an election rally in about an hour.

This temporary shelter for cows and calves, witnesses at least ten deaths everyday, according to locals. pic.twitter.com/d75PdsEuUq

Only a kilometre away from the ground on which Adityanath was holding his rally lies the Mela ground at Sataon village. This ground has recently been transformed into a temporary shelter for cattle, housing thousands of cows, calves and bulls.

This temporary shelter was made by the district administration on February 2, only around 20 days before the elections.

The administration said that the temporary arrangement was made now because the stray cattle problem has only recently become serious; however, the villagers say that the issue has existed for years. Cows at the temporary shelter. Photo: Ismat Ara/ The Wire.

Tax officer Dhananjay Verma has been appointed by the administration to look after the arrangements of this temporary shed, under the district chairman.

Speaking to The Wire, Verma said that three gaushalas are currently being constructed and that all the animals from this shed will be transferred once the gaushalas are completed, in a few months.

Also read: UP Assembly Polls: There Is Both Clarity and Confusion About Voter Choices

Problems with the shelter

Dhunna is one of the ten caretakers at this shed, which houses around 3,000-4,000 cattle. Speaking to The Wire, she said that the number of caretakers is grossly inadequate. “How will we, alone, manage thousands of cattle?” she asked. 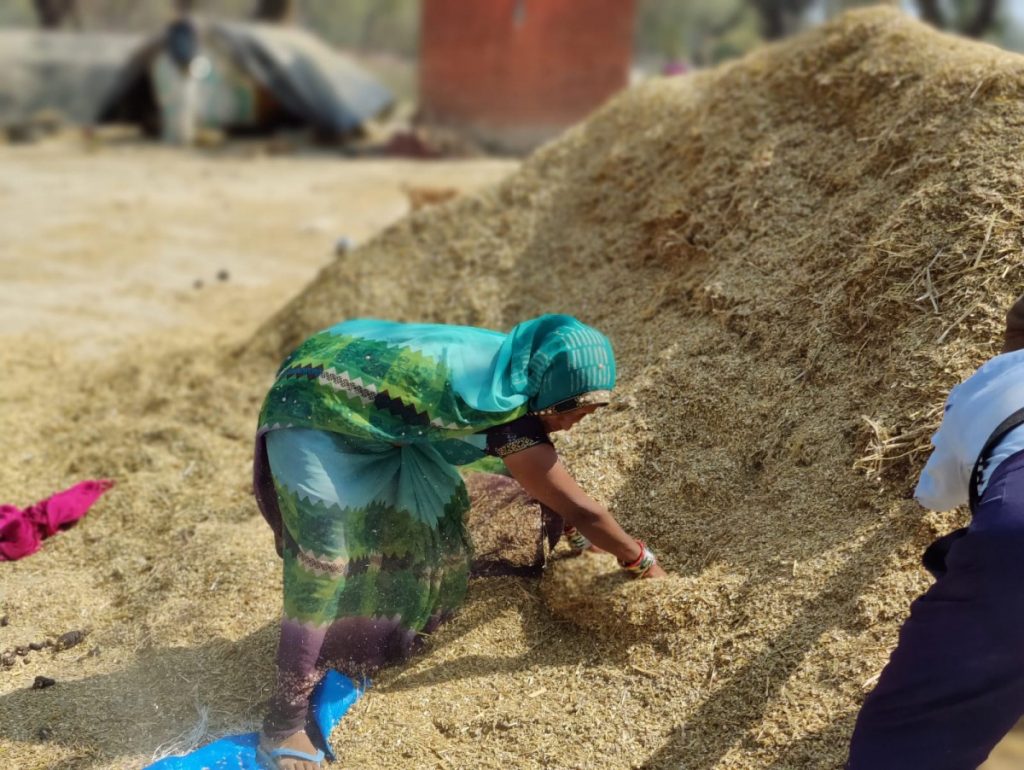 Dhunna, one of the caretakers at the shelter. Photo: Ismat Ara/ The Wire.

Dhunna is responsible for feeding the animals, but according to Puttan, another caretaker, the amount of fodder provided by the administration for the cattle is not enough to meet the needs. “It is enough only for a hundred of them; we have thousands of animals kept in this shed,” he said.

Puttan, who resides in the nearby Kurmimaon village, also said that at least ten cows die in the shelter on a daily basis. While visiting the shelter, this reporter saw the bodies of at least three dead cows. One of the dead cows this reporter saw at the shelter. Photo: Ismat Ara/ The Wire.

Inside the shed, the animals often even fight amongst themselves and the older animals die as a result. The villagers said that they had requested the administration to keep the cows and calves separate from the bulls, but that has not happened.

Verma, on the other hand, told this reporter that the administration wants to enforce this separation between cows and calves and the bulls but that the villagers are the ones who are not following instructions. He further said that this problem will be fixed once the gaushalas are completed.

Locals also told The Wire that traders come and take the carcasses of the dead animals away and they suspect they use them to make leather.

Further, the villagers said that animals still manage to escape the shed from time to time and destroy crops since the fencing is inadequate for holding so many animals inside. Crucially, the ten caretakers are unclear about their payment on this job. Despite already having worked at the shelter for over two weeks, they have not been told who will pay them.

“We will take solace in the fact that we have served gaumata and also helped farmers by reducing their stray cattle, even if we are not paid,” said Sushil Kumar, another caretaker that The Wire spoke to.

Kumar said that he has already given his details to the administration but is yet to receive a penny. Sushil Kumar, another caretaker, who is yet to be paid despite providing all his details to the administration. Photo: Ismat Ara/ The Wire.

The gravity of the problem

Shanti, who lives near the shed, has recently been widowed after losing her husband to cancer. She told The Wire that she had lost her entire crop in the past when stray cattle entered her field and ate all of it.

Just three months after the incident, she also lost her entire wheat crop after the cattle, once again, managed to enter her field.

Shanti has two daughters who live with her and now, she says that the futures of all three women are uncertain.

“They are of a marriageable age now. How can I even think about their marriage when I am not able to even fill their tummies?” she asked.

“This year will be very difficult for me,” Shanti said, tearing up. With folded hands, she asked for help from the administration. 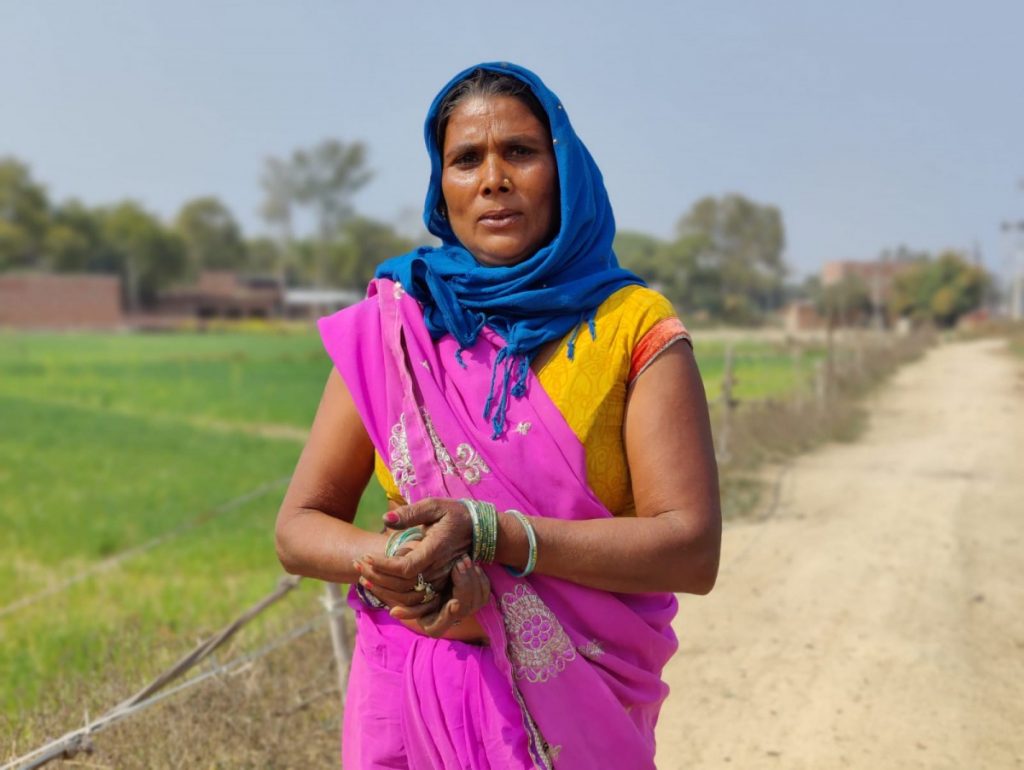 Shanti, who lives near the shed and has had her crop destroyed more than once by stray cattle. Photo: Ismat Ara/ The Wire.

Shanti’s neighbour, Deepu, said that he is afraid that once the election is over, the animals will be released from the shed and he will have to go back to staying up at night to make sure they do not destroy his crops.

“On my nights, my legs would be drenched from the morning dew,” he recalled.

The problem of stray cattle prevails across Uttar Pradesh and was exacerbated, among other things, by the clamping down on cow slaughter by the Adityanath government in the state.

Cow protection has featured prominently in the BJP’s Hindutva narrative and led to an uptick in lynchings and violence from so-called vigilantes in the name of cow protection. The destruction of the livelihoods of marginal farmers in Rae Bareli is one more consequence of the ruling party’s Hindutva politics.

In a speech in Unnao on Sunday, Prime Minister Narendra Modi said that a new policy on the issue of stray cattle will be introduced from March 10, which happens to be the day the votes of the assembly elections will be counted.

“One day, people will even keep stray animals tied at their homes because there will be income from that,” the prime minister said.

Back at Adityanath’s rally in Harchandpur, thousands gathered to listen to the chief minister campaign for BJP candidate Rakesh Singh, the sitting MLA from the seat who had won in 2017 on a Congress ticket.

Singh was among the seven Congress MLAs that were elected to the Uttar Pradesh assembly in the last election..

Singh’s supporters say that while he did a lot of work for the people of the region during his time as a Congress MLA, the voters are not confused as to whether they should vote for him or the new Congress candidate from the constituency, former minister Surendra Vikram Singh.

Rakesh Singh leaving the Congress and subsequently joining the BJP just before the elections came as a jolt to the Congress, as he is quite popular among the people for his development work.

Congress workers in the district have accused the BJP of pressuring Rakesh Singh by threatening him to join the party just before the elections.

“This has thrown off the caste equations here,” said one Congress worker, adding that backward castes are now expected to rally behind either the BJP or the Samajwadi Party (SP)-led alliance.

Rae Bareli has a large OBC population, including individuals from the Lodhi, Yadav, Maurya and Kurmi communities. The Paasi community is among Scheduled Castes (SC) dominant here.

“The SP and Congress helped him (Rakesh Singh) grow and prosper. Now he has shifted to the BJP because of his lust for power. He quit the party during its time of need, as the party needs a lot of work to revive itself,” Congress district president Hanuman Singh said.

However, Hanuman Singh also said that the fact that Adityanath came to Harchandpur for a rally shows that the BJP is anticipating a challenge in the seat, more so because the BJP has never won from the seat before.

“His (Adityanath’s) campaign is highly polarised and it may get them votes. Their only intent is to remove the existence of Indira Gandhi here,” Hanuman Singh said. However, the problem of stray cattle, among others, has got farmers in the district particularly angry with the BJP. Guru Prasad Lodhi, a Bharatiya Kisan Union (BKU) member from Rae Bareli, told The Wire, “Farmers in Rae Bareli will not vote for the BJP. Diesel is more expensive now, so is electricity.” According to him, around 600-1,000 farmers from Rae Bareli had joined the farmers’ protest against the three farm laws last year.

The problem of stray cattle is so extreme in the region that Rakesh Singh, during his campaign, had even promised Rs 50 as ‘prize money’ to villagers who bring stray cattle to the temporary shed.

In response, Surendra Vikram Singh, also a former SP MLA, had filed a complaint against Rakesh Singh. Following this, the Election Commission had issued a notice to the latter for promising money to villagers.