The symbolic dwarfing of ‘Nehru’s memorial’ is obviously meant to tell the nation who runs the country and on what terms. When the former prime minister, who is known for his strict economy with words, writes a long letter – one of his rare ones – to his rather over-articulate successor, one assumes that the matter must be important. The letter I refer to is dated August 24, 2018, in which Manmohan Singh expresses deep concern at the move, initiated obviously at Narendra Modi’s behest, to change the character of the Nehru Museum Memorial and Library (NMML) from a memorial to Jawaharlal Nehru to one for “all PMs”.

India has had a total of 14 prime ministers, including Modi – and three among them are alive. Some spent just a few months in office which, frankly, did not permit them to make a mark on history. The plan that is underway, however, appears to literally ‘crowd out’ the memory of India’s first prime minister from the very precincts that were his home for 16 long years, right up to his death in 1964. It is reported that Rs 280 crore have been promised, just for starters. As the former culture secretary who liaised with NMML and is aware of the ground realities, one knows what great difficulties have to be surmounted in securing additional funding under the existing system.

However, before we take up Manmohan Singh’s insistence that “the museum must retain its primary focus on Jawaharlal Nehru and the freedom movement”, let us go over the facts. The Nehru Memorial Museum is set in a large campus that was built in 1930 to accommodate the residence of the commander of the British Empire’s army in India. It remains today one of the few patches of greenery that is left within the gasping lungs of Delhi. The premises, perhaps, constitute one of the handful of unspoilt, well maintained public spaces in Delhi that are actually open to the common citizen.

Several publications have celebrated the memorial’s numerous species of ancient trees and the fascinating variety of birds that populate the campus. In fact, the ‘nature walks’ and ‘heritage tours’ that NMML organises within these grounds offer unforgettable treats to so many children and young men and women each year. The building itself is a handsome piece of Regency architecture that does not scream for attention like some neo-classical edifices do. Yet it does not fail to command a quiet dignity with its simple white and pink stone and stucco elegance. Designed and executed in 1930 by Robert Tor Russell, the same architect who presented Delhi with the imposing, signature buildings of Connaught Circus, this ‘Flagstaff House’ (as it was called) dared to break free from the almost ‘Soviet uniformity’ and boredom of plain, white shoe-box buildings of the Lutyens’ zone, that had a tiny portico and some faux pillars thrown in, for effect.

Its appellation ‘Teen Murti’ or ‘three statues’ refers to the very prominent landmark in the traffic island in front of its main gate – three Indian soldiers who face three different directions as their backs rest against a pointed obelisk. They symbolise Indian soldiers from the three largest princely states of Jodhpur, Hyderabad and Mysore who fought in the First World War. It was created by British sculptor Leonard Jennings and was installed eight years before ‘Flagstaff House’ was up.

Returning to the main campus, we have an impressive museum but what has assisted generations of serious researchers of colonial and post-colonial India is the enviable library. It has nearly three lakh books and two lakh photographs and it also houses a mind-boggling archive. Among its treasures are more than 1,200 collections of  ‘papers’ of Gandhi, Rajaji, G.D. Birla, P.N. Haksar and even Savarkar and Golwalkar who really need serious and dispassionate evaluation. There is a wealth of really useful microfilms and microfiches that scholars can access for priceless historical materials. In 1964, President Radhakrishnan was made chairman of the Jawaharlal Nehru Memorial Fund that offers fellowships and scholarships and this fund is also located in the campus. Till recently, NMML was a buzzing hub of open discussion and free debate under Mahesh Rangarajan, its former director, and speakers could criticise the government of the day, without fearing income-tax raids or dirty trolls.

Rangarajan resigned in 2015, soon after the constitution of a new executive council (EC) of the NMML as he realised it was impossible to function normally when the 14th prime minister of India, who is also president of the NMML Society, constantly gunned for the first prime minister, in whose memory this institution was set up. He was certainly not willing to be an accomplice in plans that are palpably opposed to the NMML Society’s Memorandum of Association and rules. The chairman of the new EC, Lokesh Chandra, started the ball rolling by raising publicly a rather foxy concern: “Why should the Nehru Memorial remember only Nehru?” We are not sure what the vice chairman, M.J. Akbar said, just as we are not sure if he is still there or whether he has resigned. Nor do we know what the world’s lone Oxbridge apologist for the Hindu Right, Swapan Dasgupta, had to say. But then a fatuous query made by Chandra obviously amazed people, many of who had earlier held him in high regard for his contribution to Buddhist iconography and Vedic studies. 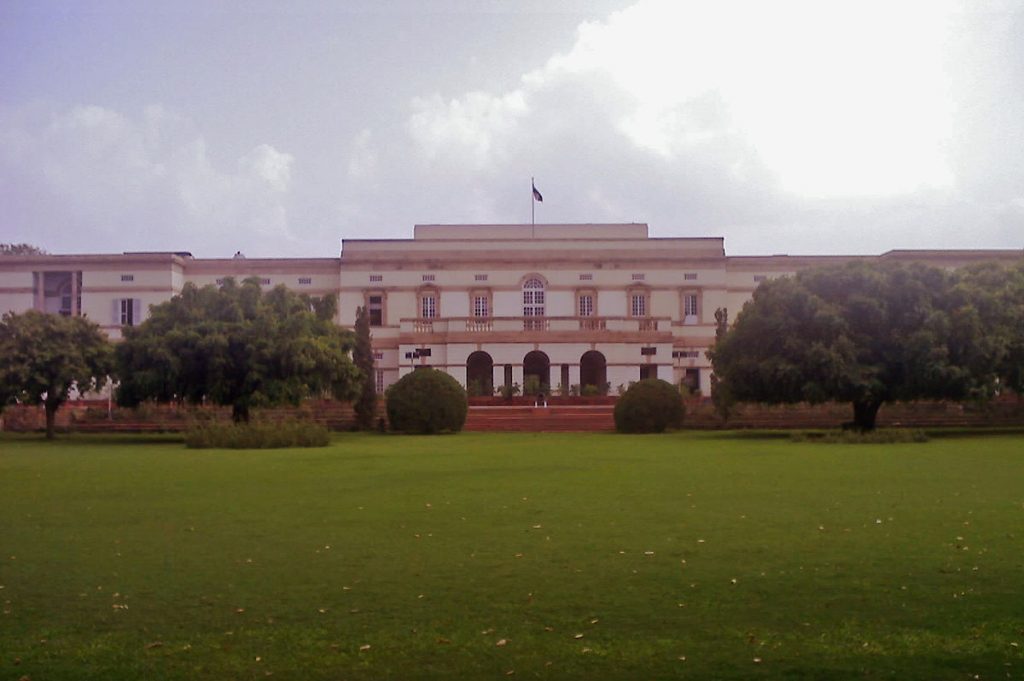 The symbolic dwarfing of ‘Nehru’s memorial’ is obviously meant to tell the nation who runs the country and on what terms.

In sharp contrast to Modi’s institutionalised meanness, we note Atal Bihari Vajpayee’s class, when he went into raptures to describe Pandit Nehru after his death – and Singh has reminded Modi about it. Vajpayee called Nehru “that vibrant personality, that attitude of taking even the opposition along, that refined gentlemanliness, that greatness we may not again see in the near future.” This eloquent praise hurts his party man Modi the most, for while he kissed the steps of parliament in grand theatrical style before cameras, he has never betrayed for a moment any fondness for the institutions of parliamentary democracy.

The way Modi reacts to the very name ‘Nehru’ is not normal, to say the least, and not a month has passed in the past 56 when he has not dragged Panditji out of his eternal rest at Shanti Vana, to punch him around, for any reason that strikes him. Psychologists and those in allied professions can give their diagnoses, but for us, it becomes a real problem when private prejudice masquerades as public policy – with the exchequer funding the spews that emanate.

Singh reminded Modi that Nehru had spent ten long years in jail during the freedom struggle, that “no amount of revisionism can obliterate that role and his contributions”. This perhaps touches a raw nerve of those who stayed far away from the national movement, like the Rashtriya Swayamsevak Sangh (RSS), which is the father of the party that currently runs the government. In fact, it is from the RSS that Modi rose, but equally important is the fact that his ‘guru’ and the ideologue of Hindutva, V.D. Savarkar of the Hindu Mahasabha did go to jail. What the Hindutva brigade can never live down is that Savarkar actually begged and pleaded with the British to release him at any cost, exposing his real character, as contrasted with, say, Gandhi, Nehru and the countless other patriots. Yet it is Savarkar’s followers who never cease to flaunt their ‘ultra-nationalism’ and terrorise others with excesses that obviously mask the fact that they were nowhere when ordinary Satyagrahis followed Gandhiji through the merciless batons and bullets. Modi must surely be conscious of the selfless sacrifice that Nehru made and this rankles him even more.

Also read: Narendra Modi and the Sangh Parivar are Trying to Appropriate the Strongly Secular Netaji

We have also no idea whether the NMML Society that is chaired by the prime minister has taken the final decision, as the public domain gives us no clue. If the PM had the courtesy of replying to his predecessor’s letter, the press would know first of course, but we would hear his stand on the issue. So, in the absence of a clear declaration from NMML, lesser mortals have to assume that “it has been decided” that Nehru has had enough of adulation from the nation. There is a bit of evidence that we shall discuss soon, but it is clear that Nehru should now share his glory with ten other dear, departed prime ministers. If we exclude from this list those like Lal Bahadur Shastri and Indira Gandhi, who already have well-visited memorials in Delhi. If it is only about a memorial, then we may recall that almost all deceased prime ministers have one, a sthal near Rajghat in Delhi in their name. Many have memorials in their honour in other cities, like Morarji Desai’s in Ahmedabad and Narasimha Rao’s in Hyderabad. Besides, does it not make better sense to have other more useful institutions in their name in towns associated with them, like, say a university of advanced agricultural sciences named after Charan Singh in Meerut.

The leaders ‘from the opposition’ (not ‘of the opposition’, since the present regime did not have the grace to permit one) are, of course, being assured that decisions would be on a consensus basis. But the website of NMML mentions that it wants “Expressions of interest” from competent parties to instal digital displays for the Prime Ministers’ Museum. Let us introduce some humour at this stage by asking readers to make sense of this vexatious piece of bureaucratese on the Nehru Memorial’s website that reads:

“Notice for limited tender enquiry for supply installation and commissioning of large multi-user tangible table and standalone transparent digital display with interactive digital content with software and hardware components integrating exhibition content and the final testing commissioning of the complete product along with warranty specifications for a special exhibition as part of the new museum project on prime ministers of India…”.

Whew! No comma, semi-colon, full stop. The short point, nevertheless, is that steps are underway to execute a project for “all prime ministers of India” within the present Nehru memorial. While committees and sub-committees may decide “how best to remember all of them”, the question is why destroy a developed campus and an institution that was brought up with love and care by some of India’s most distinguished sons and daughters? It is learnt that the current regime plans to devastate the unique back lawns, as it would not dare to build a building in front of the stately present one. This would surely destroy the skyline, serenity and gravitas of NMML forever, with a new CPWD-construction that are usually unimaginative eyesores.

It is unrealistic, however, to expect the ‘Amar-Chitra-Katha’ educated intellectuals of the Hindutva brigade to ever replicate the treasures of either the library or the archives of NMML in their proposed “Prime Ministers Memorial” – which could, actually, be built anywhere. For instance, one side of the famous octagon around India Gate does not have a worthy public building. But the regime appears hell-bent on damaging what already exists in Nehru’s name and the veritable ‘go slow’ at present in enriching the library, the archives and the digitisation project is just an example. After all, the favourite strategy of the ‘short’ banal, who just cannot stand excellence, has always been ‘cut the tall’. They are, poor souls, acutely conscious of their in-built inadequacies to reach the much-desired heights. As Singh put it “Jawaharlal Nehru belongs not just to the Congress, but to the entire nation”. Vajpayee, however, went a step ahead and rued that “such a resident may never grace Teen Murti ever again”.