With a not-so-subtle jab, the former prime minister has virtually indicted the country’s powerful army for a disastrous national security policy that has turned Pakistan into an international pariah. The three-time former prime minister of Pakistan Mian Mohammad Nawaz Sharif took a not-so-subtle jab at the Pakistan army’s support for jihadist terrorism, especially its India-oriented proxies. In an interview with Dawn newspaper last weekend, Nawaz Sharif said: “We have isolated ourselves. Despite giving sacrifices, our narrative is not being accepted. Afghanistan’s narrative is being accepted, but ours is not. We must look into it … Militant organisations are active. Call them non-state actors, should we allow them to cross the border and kill 150 people in Mumbai? Explain it to me. Why can’t we complete the [Mumbai terror attack] trial? … it’s absolutely unacceptable. This is exactly what we are struggling for. [Russian] President Putin has said it. [Chinese] President Xi has said it.”

Without actually naming it, Nawaz Sharif has virtually indicted the country’s powerful army for a disastrous national security policy that is turning Pakistan into an international pariah. It is no secret that the army, and not civilians, is running jihadists of all shades as the so-called force-multipliers for decades. What Nawaz Sharif has said is rather well-known, but coming from a former premier adds airtight authenticity and that is why the Indian media ran with the story.

But why did Sharif say it and why did he say it now? The answer is an old Persian adage: ‘tang aamad, ba jang aamad’ – when pushed against the wall, a beleaguered person is forced to fight back. Nawaz Sharif has been at the receiving end of the army’s machinations since almost immediately after assuming power in 2013. The major bone of contention was his insistence that the military dictator General Pervez Musharraf, who had toppled Nawaz Sharif’s previous government in a 1999 coup d’état, must face a trial for high treason. Additionally, the army was miffed at Nawaz Sharif’s friendly approach vis-à-vis India and a neutral or soft posture towards Afghanistan.

In 2014, elements within the army’s powerful Inter-Services Intelligence (ISI) Directorate egged on the opposition politician Imran Khan to protest against the Pakistan Muslim League Nawaz (PML-N) government on the pretext of presumed rigging in the 2013 elections. The ISI orchestrated a lockdown of the federal capital Islamabad through Imran Khan’s party and a rabble-rouser Pakistani-Canadian cleric Tahir-ul-Qadri’s followers and gave a thorough shakedown to the Nawaz Sharif government, which relented on the Pervez Musharraf issue and eventually allowed him to leave the country ostensibly for medical treatment, but he has not returned till date.

In the end analysis, it was all about the army asserting itself against the civilians in not just the national security and foreign policies, which are its traditional fiefdoms, but also in other areas. The army pushed the civilian government to pass legislation setting up military courts presumably to try terrorists. The army, already involved in the China-Pakistan Economic Corridor (CPEC), sought even greater control and formal administrative role in the multi-billion-dollar project.

The army, having apportioned itself the lion’s share of resources and governance, was still not content and saw Nawaz Sharif as the last man standing between the total praetorian state and a nation-state with a semblance of democracy. With Benazir Bhutto brutally assassinated in 2007, Nawaz Sharif has been the only Pakistani leader who could challenge the army’s overt and covert political interventions, which in Pakistan’s case are not an aberration but an abominable norm. Nawaz Sharif’s current nemesis Imran Khan has been toeing the army’s line for a decade, if not longer and the late Bhutto’s party has also fallen in line at the military caution. The problem for the army has been Nawaz Sharif’s soaring popularity in the country’s most populous and his native province, the Punjab.

In the PML-N’s current term which ends on the May 31, the voter in Punjab has remained largely happy with its performance and has not found any reason to boot it out through undemocratic means or agitational politics which the army-Imran Khan combo have tried twice. A perchance release of a documents cache termed the Panama Papers, in which Nawaz Sharif’s children – though not him – were named for assorted offshore accounts and possible money-laundering, gave the Pakistani establishment an opportunity to nail him through the courts. 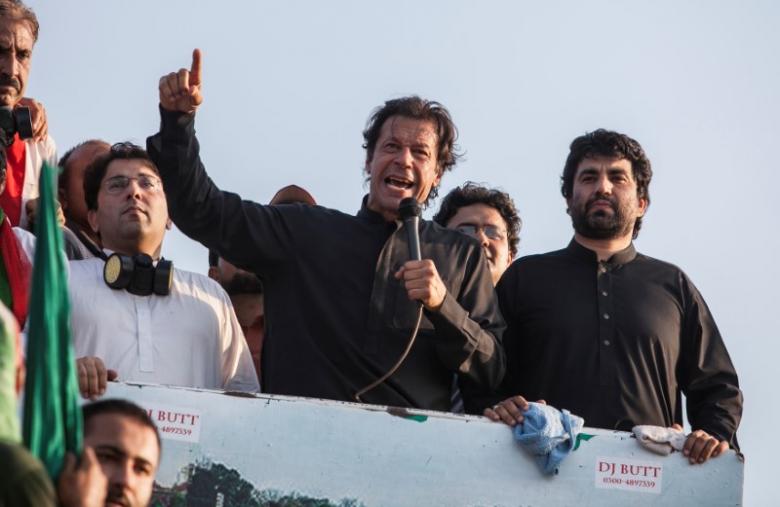 Nonetheless, the Supreme Court of Pakistan, which had assumed the role of a trial court thereby trampling upon Nawaz Sharif’s constitutional right to the due process and graduated appeals, found no evidence of his involvement in the Panama Papers. Instead, the Supreme Court convicted him for not declaring a residential permit for UAE and a paltry potential income which he could have drawn from his son’s firm but actually hadn’t. The court delivered the harshest of punishments on flimsiest of evidence, dismissing Nawaz Sharif from the high office and banning him from life from holding any public office. While the Panama Papers release was not a conspiracy, the army, Supreme Court and Imran Khan alignment to exploit it collectively was too streamlined to be a mere statistical probability. The judiciary, which has an extremely long history of being the army’s handmaiden, had done a hatchet job for it yet again.

A defiant Nawaz Sharif, with his daughter Maryam Nawaz by his side, immediately took to the streets to impugn, protest and flay the travesty of justice that had been delivered in his case. He has been crisscrossing mostly the Punjab and the Khyber-Pukhtunkhwa provinces holding rallies, which are part protest and part electioneering. He has been rather open in criticising the judiciary for making a mockery of justice, but his criticism of the army had been measured and subtle. The slogan that is his rallying cry i.e. “vote ko izzat do” (respect the people’s vote), takes a shot at the judiciary and the army, both unrepresentative outfits that have frequently colluded to flout the people’s mandate. So, what has changed since his ouster that led to his recent remarks to Dawn?

It is the massive political engineering undertaken by the security establishment – a common Pakistani euphemism for army – that has pushed Nawaz Sharif to the brink. After this dismissal, Nawaz Sharif and his party’s strategy was manifold: firstly, hold on to the government, with the substitute prime minister Shahid Khaqan Abbasi in the saddle to complete the term of the assemblies; secondly, continue the mass mobilisation and convert it from partial protest to full election campaign when the government completes its term; and, thirdly, expose consistently the illegitimacy of the process that led to Nawaz Sharif’s ouster.

With Nawaz Sharif’s consistent popularity on the road, especially in Punjab, the security establishment lost its nerve and went for Plan B, i.e. undermine the PML-N’s integrity as a party, thereby weakening its capacity as an election machine. In the restive Balochistan province, several provincial assembly members changed loyalties overnight and the coalition government led by the PMLN was toppled. The army’s fingerprints were all over the scheme. A seasoned Pashtun nationalist politician and an ally of Nawaz Sharif from Balochistan, Mahmud Khan Achakzai went on record to state that a certain Brigadier Khalid of the ISI had stage-managed the mini putsch. Another set of defections from the PML-N took place earlier this month. The defecting legislators ostensibly formed a front for the rights of southern Punjab province but miraculously merged into Imran Khan’s Pakistan Tehrik-e-Insaf (PTI) within days.

While elements within Nawaz Sharif’s party, including his appointed successor and younger brother Shehbaz Sharif, appear to be of the view that they will have a fair chance at the next general elections, which are expected to be held in July, the elder Sharif smelled a rat. Nawaz Sharif seems convinced that the upcoming elections will be rigged against him, not necessarily through ballot-stuffing but via pre-poll sleight of hand as demonstrated in Balochistan and South Punjab. He realises that in the 21st century, the army is not interested in an overt coup d’état but wishes to wield martial law-strength power, without actually imposing a military dictatorship. And, quite frankly, the army has gotten real adept at this coup-without-a-coup scheme of things. Nawaz Sharif – himself an establishment insider once – also knows that the Pakistan army is an extremely disciplined outfit and no lowly brigadier or even an ISI director can plot to topple elected governments on their own, without the knowledge and approval of the army chief.

For all practical purposes, the army is its chief and the chief is the army. Nawaz Sharif, therefore, appears to have opted to confront the army much more openly, if not head-on. Taking a stab at the army’s proxies in the Dawn interview could effectively be the first salvo in an incremental tirade exposing the army’s soft underbelly i.e. its relentless use of jihadi terrorists to prosecute its foreign policy goals while flatly lying to the world about it.

If the interview itself was a warning shot, Nawaz Sharif defending, in a second interview, what he had told Dawn, is an indication that he is digging in for a longer haul. The army, on its part, in a blatant display of insubordination had “suggested” via tweet for Prime Minister Abbasi to convene the cabinet’s National Security Committee. Nawaz Sharif rejected not only the NSC’s statement but thereby the army’s criticism as well. In defending his remarks, Nawaz Sharif has also snubbed his brother Shehbaz and the Abbasi who had struck an apologetic tone towards the army. He and many in his party appear to be of the opinion that either the PMLN tackle the army en masse or the latter would chop it into pieces like it did after the 1999 coup or has done to the ethno-linguistic party Muttahida Qaumi Movement recently.

Nawaz Sharif seems keen on forcing the army to show its hand. He knows that soft coup doesn’t ruffle feathers within or outside Pakistan but a harder move by the army is bound to draw both domestic and international wrath. The reference to the Russian and Chinese presidents in his interview indicates that Nawaz Sharif is acutely aware of the army’s raw nerve – international pressure. Where Nawaz Sharif has lacked big time though is on the parliamentary front. In five years of his party’s rule, he has consistently neglected the forte of any democratic leader – the parliament.

While his words in a newspaper or at a public rally do matter, the same words, had they been delivered inside the Parliament, would have carried exponentially more weight. Civil-military balance cannot be tilted with flash-in-the-pan moves; it requires planning, patience and perseverance. In India, for example, Jawaharlal Nehru started the military reforms a year before independence when he wrote, on September 12, 1946, that monumental letter to the commander-in-chief Field Marshal Sir Claude Auchinleck and defense secretary Philip Mason, urging to “transform the whole background of the [colonial] Indian army”. But to eventually see those transformations materialise, Nehru strengthened the parliament to the fullest. Indian-American scholar Aparna Pande notes in her recent book From Chanakya to Modi:Evolution of India’s Foreign Policy, “during his seventeen years in power, Nehru made it a point to attend every session of parliament held while he was in Delhi, to emphasise the importance of parliamentary responsibility.”

Nawaz Sharif’s instinct is right that a praetorian state under the military tutelage is not compatible with a multi-ethnic federation like Pakistan and had led to the country’s vivisection in 1971; whether he has the masterplan to help the country avoid that militaristic detour again, remains to be seen.