With Sidhu's Show of Strength in Amritsar, Tide Appears to Be Turning in Punjab Congress

‘Defiant’ Punjab CM Captain Amarinder Singh, however, remains adamant on his demand that Sidhu apologise to him. 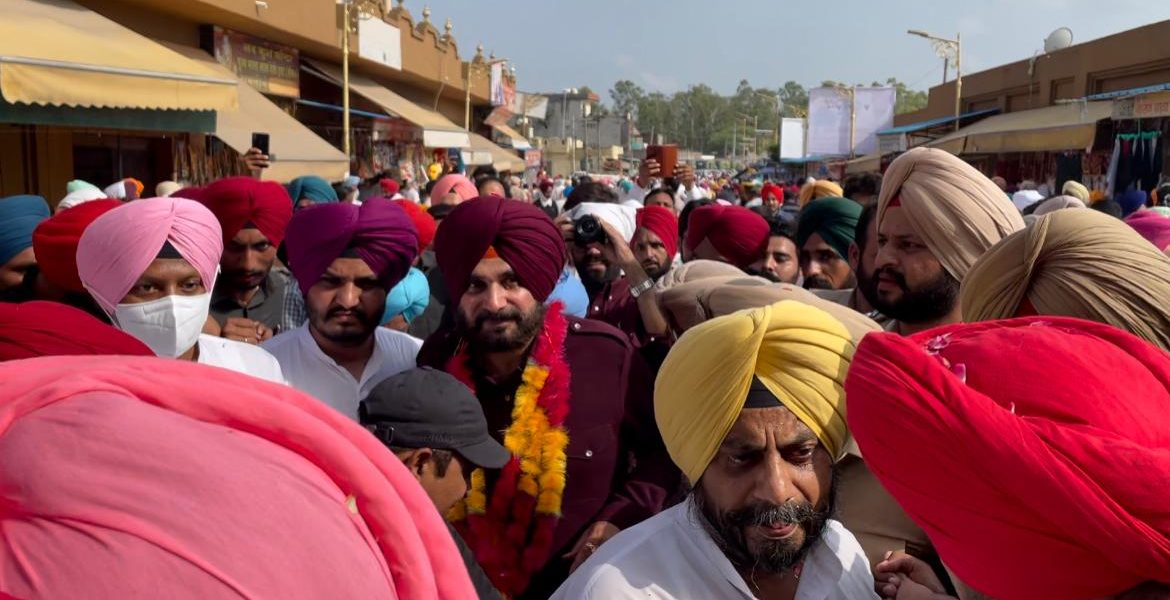 Navjot Singh Sidhu along with party MLAs on Wednesday. Photo: By arrangement

Chandigarh: The decks within Punjab Congress seem to have been shifted in favour of newly appointed state party chief Navjot Singh Sidhu days after his elevation.

Even as the Punjab Chief Minister Captain Amarinder Singh remained defiant to Sidhu’s elevation and stuck to his demand for a public apology from Sidhu for use of “derogatory language,” Sidhu flexed his muscles by managing to gather as many as 62 MLAs at his Amritsar residence on Wednesday, July 21.

This comes two days after he met 40 MLAs during his visit to Chandigarh on Monday. The Congress currently has 77 MLAs including Captain Amarinder Singh and Navjot Sidhu in the 117-member Punjab Assembly. Recently three AAP MLAs joined Congress

Besides MLAs, several district party presidents and other office bearers were present in formally welcoming Sidhu. The Captain camp was also busy garnering support within the party as indicated by Captain himself in his tweet on Monday .

Most MLAs had been rallying behind Captain as recently as February this year when Congress swept local bodies polls. What changed the tide in the party now is the emergence of Sidhu as a key face ahead of state assembly polls in January, 2022.

Punjab Cabinet minister, Sukhjinder Singh Randhawa, a former close aide of Captain and now a key member of Sidhu’s team, told The Wire that history has repeated itself. Before the 2017 assembly polls, Captain had emerged as a key figure when he replaced Partap Singh Bajwa as Punjab Congress chief. This helped the party win the election. Now it is Sidhu’s turn to help Congress repeat the government.

He said Punjab people always have a liking for an aggressive leader who could connect with them and take up their issues with a strong fist. “That is the reason Sidhu has been getting support both within the party and outside as he really has passion to change the things around.” 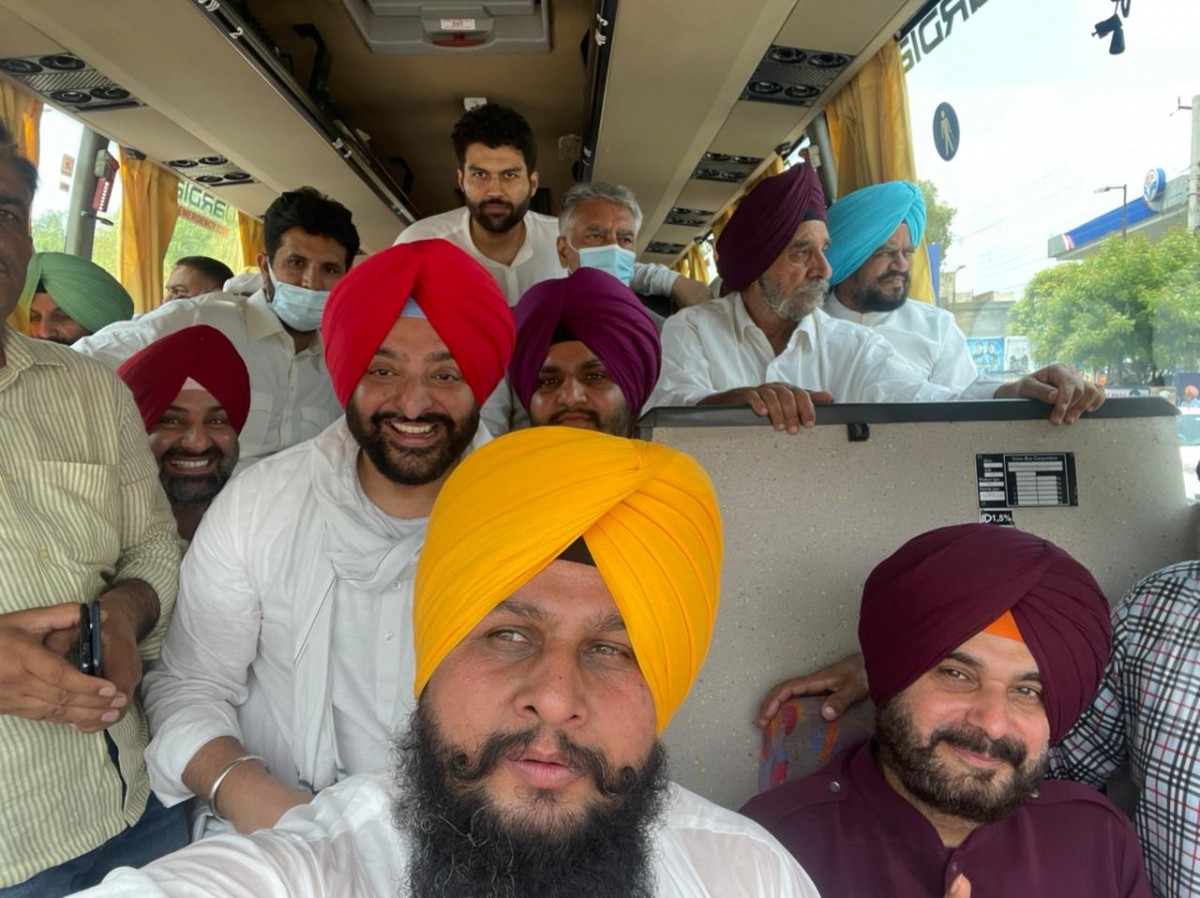 Navjot Singh Sidhu along with party MLAs in a bus to Golden Temple in Amritsar on Wednesday. Photo: By arrangement

“When the party high command changed Bajwa and made Captain party chief, everyone within the party abided. Now also, no Congressman, be it Captain Amarinder Singh or anyone else, can defy the high command’s decision to elevate Sidhu,” said Randhawa.

He said it has been proved beyond doubt on Wednesday when a majority of party MLAs arrived at Sidhu’s residence at his invitation. “Others who missed it will turn up sooner or later,” he added.

What worked for Sidhu, as many believe, was his outreach programme in the past four days. Even before his elevation, Sidhu undertook a consolidation drive making the political life of Captain Amarinder Singh more difficult.

He toured several districts and met MLAs at their residences. His team conveyed to the media that Sidhu met over 50 MLAs.

Besides, his elevation has sent the message across the party that he has the approval of the Gandhi family.

Winds of Change – Of the People By the People For the People | Chandigarh to Amritsar | 20 July 2021 pic.twitter.com/CRBQLqMJk2

Sidhu is an MLA from Amritsar East but there was also another reason that he held the MLAs’ meeting in Amritsar.

After breakfast, he along with all other MLAs and party leaders paid obeisance at the Golden Temple and then the Durgiana temple.

Political analyst Harjeshwar Pal Singh said that the Golden Temple has both religious and political importance in Punjab politics.

He also said that in Punjab, Sikh vote is not enough to win an election and the votes of Hindus and Dalit people matter a lot.

On the other hand, Captain Amarinder Singh, who has been at the helm of party affairs in Punjab for the last 24 years, refused to bow down in the wake of political aggression displayed by a younger Jat Sikh Congressman.

Three days since Sidhu’s elevation, Captain has not yet publicly congratulated him, even as Sidhu camp leaders claimed that the party held considerable consultations with the Captain on appointing Sidhu as party chief.

Making it amply clear that he is unhappy with Sidhu’s appointment, the office of chief minister Amarinder Singh tweeted his stand not to meet Sidhu until the latter offered a public apology over his 150-odd “personally derogatory” tweets.

The tweets that Captain is referring to are the ones in which he made allegations against the chief minister, including the alleged collusion between Captain and the Badals, his failure to curb various mafias besides unfulfilled poll promises and the sacrilege issue. 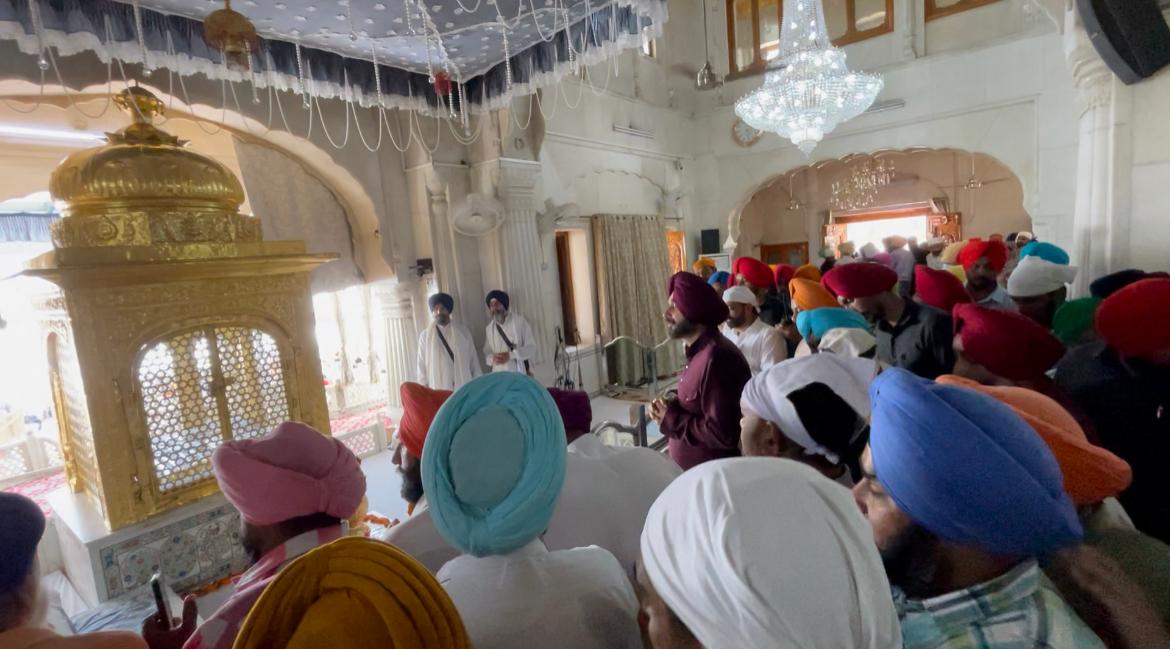 Navjot Singh Sidhu along with party MLAs at Golden Temple. Photo: By arrangement

Raveen Thukral, media adviser to the CM, tweeted on Tuesday, “Reports of Navjot Sidhu seeking time to meet chief minister Amarinder Singh are totally false. No time has been sought whatsoever. No change in stance… CM won’t meet Sidhu till he publicly apologises for his personally derogatory social media attacks against him.”

Even leaders closer to the Captain’s camp took a similar stand. Punjab government issued a media release on Tuesday in which senior Punjab cabinet minister Brahm Mohindra also ruled out a personal meeting till Sidhu resolved his issues with the chief minister.

He said the decision to appoint Sidhu had been taken by the high command and is welcome. “However, I will not meet him (Sidhu) till he meets the chief minister and resolves his issues with him,” he said.

“Captain Amarinder Singh is the leader of the Congress legislative party and he (Mohindra) is duty bound to follow him,” the minister said in the statement issued.

Also read: With Sidhu ‘Almost Certain’ To Be Made Punjab Congress Chief, Tensions Escalate Within Party

On the other hand, Sidhu’s team took a dig at the Captain’s demand. Pargat Singh, party MLA from Jalandhar Cantt, said, “Why should Sidhu apologise? It’s not a public issue. CM has not solved many issues. In that case, he should also apologise to the public.”

Earlier on Monday, cabinet minister Tript Rajinder Singh Bajwa, another key member of Sidhu’s team now, had advised the Captain to “let go” of Sidhu’s tweet the way he buried the hatchet with his arch-rival Pratap Singh Bajwa.

Bajwa had written a number of letters criticising the functioning of Amarinder Singh’s government in the past. Not only this, Captain recently welcomed Sukhpal Khaira, MLA from Aam Aadmi Party, who in the past had been prolific with no-holds-barred attacks on the Captain, using intemperate language and with swipes at his private life. 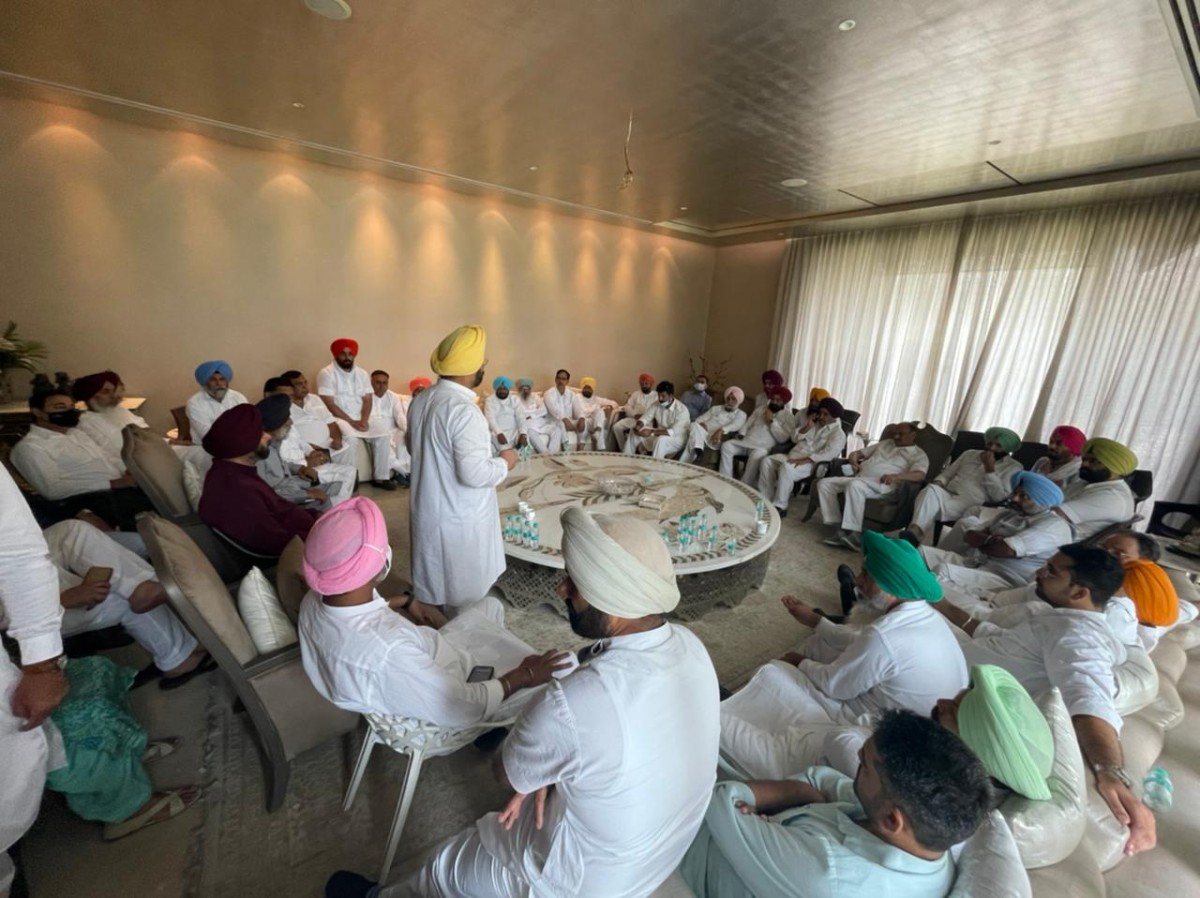 Congress MLAs at Sidhu’s residence in Amritsar on Wednesday. Photo: By arrangement

Political analyst Khalid Mohammad said that there is a reason why Captain is adamant on Sidhu’s apology.

He has realised that Sidhu’s aggression had dented his popularity and weakened his position before the people of Punjab. An apology from Sidhu will reassert his position. But it is not likely to happen as Sidhu has clarified that whatever he said was in public interest, Mohammad said.

“Needless to say, Sidhu is a rising star in the party and that is the reason most of the MLAs came out in his support as they know that Sidhu may help them get re-elected. But this is a dangerous game too. The party must find a way for Sidhu and Captain to work together. Otherwise outcome of coming Punjab polls is anyone’s guess,” he added.

As far as Sidhu’s camp is concerned, they say Sidhu’s elevation will surely benefit the party in a big way

Sukhbinder Singh Sarkaria, a former close aide of Captain and now an important figure in Sidhu’s team, told The Wire that there is reason why the entire party is supporting Sidhu.

“Sidhu’s appeal is across Punjab. There is a strong liking for Sidhu not only in urban areas but also in rural areas. I have no doubt that the party will win the next election under his leadership,” he said.

“I have faith that the 2022 assembly polls will be won because of Sidhu. The CM’s advisors are misleading him. Due to this, Punjab is going backwards,” said Madan Lal Jalalpur, party MLA from Ghanaur, at Sidhu’s residence on Wednesday.