'Thinking of Giving Up': How Narendra Modi Has Used Social Media to Fuel His Politics

From giving birth to an outcrop of online trolls who are 'blessed to be followed by PM Narendra Modi' to remaining quiet about the real issues plaguing the country, the curious uses of the PM's social media presence. 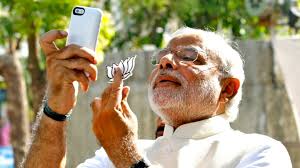 New Delhi: When prime minister Narendra Modi announced on Tuesday that he was thinking of giving up his social media accounts, much was made of it.

After all, he has been the most ‘outspoken’ top leader of the country; his social media following is enviable, and so is the professionally-managed machinery that handles his accounts in the virtual world.

He can be safely said to be in the league of some of the biggest global politicians in terms of social media presence.

His sudden announcement to give up his social media accounts this Sunday, therefore, was bound to invite speculation. His tweet sounded contemplative at a time when the national capital is recovering from one of the worst communal riots in over the last three decades.

Many Indians had looked towards him to calm tempers in the capital. But Modi, who is usually expressive at political rallies, had gone about posting routine messages even as Delhi burnt. It took him almost four days to appeal to people to maintain peace and harmony, even as his party leaders on ground blatantly polarised the already-tense environment on communal lines.

Peace and harmony are central to our ethos. I appeal to my sisters and brothers of Delhi to maintain peace and brotherhood at all times. It is important that there is calm and normalcy is restored at the earliest.

Even worse, many of his followers, and many who the prime minister follows on social media, have been at the forefront of fomenting communal tensions on the internet.

The speculation proved unfruitful when soon after his initial announcement on Tuesday he posted another tweet to say that he was only handing over his accounts to some “inspiring women” for a day to mark the occasion of the International Women’s Day on March 8.

This Women’s Day, I will give away my social media accounts to women whose life & work inspire us. This will help them ignite motivation in millions.

Are you such a woman or do you know such inspiring women? Share such stories using #SheInspiresUs. pic.twitter.com/CnuvmFAKEu

The episode has, however, revived the debate on how Modi has used his social media accounts to come to power. In fact, he is India’s first prime minister who has effectively used his online power to carefully cultivate his image and dominate political debates over the last eight years.

How did the PM’s social media strategy start out and how, then, did it tactically shift over the years?

As Joyojeet Pal, an associate professor at the University of Michigan’s School of Information, has documented, Modi’s Facebook and Twitter presence are intertwined with his rise from a state chief minister in 2012 to the national stage in 2014.

Until early 2013, his social media presence was barebones and comprised a few posts on Facebook which called upon people to join the ‘NaMo League’, a Google Hangouts session with Ajay Devgn that was also broadcast on YouTube.

“The transition in Modi’s online presence started in 2013. Early in the year, the focus of his tweeting was Gujarat; then in about the second week of June, Modi made a series of posts “seeking the blessings” of then BJP parliamentary leader L.K. Advani and communicating with party president Rajnath Singh.

Behind the tweets was the apparent outcome of BJP’s internal discussions on who would lead the 2014 national election campaign. “This marked a new, national phase in Modi’s social media discourse,” Pal wrote in his 2015 study titled Banalities Turned Viral: Narendra Modi and the Political Tweet.

“Twitter accounts in various Indian languages were set up to translate his tweets, and news emerged on the tech entrepreneurs who joined his social media campaign.

“On July 4, 2013, he overtook Shashi Tharoor as the country’s most followed politician on Twitter. Modi’s birthday, September 17, 2013, was a key social media event for the campaign,” the study added.

It was from here on out that the BJP’s famed ‘IT cell’ rapidly grew, with Modi’s handle @narendramodi beginning to follow a number of Twitter accounts that were handpicked among a pool of online right-wing supporters who had a substantial number of followers.

Meanwhile, he and his supporters launched a social media offensive against what his team called “Muslim appeasement” to denounce most forms of affirmative action for Indian minorities.

He went hammer and tongs against Indian mainstream media for its alleged failure to highlight the United Progressive Alliance’s government failures and corruption, notwithstanding the fact that the Indian media had by then almost gone into an activistic mode against the then government.

Among Modi’s followers and many BJP leaders, the term “presstitute” was popularised to describe journalists who wrote anything critical against the saffron party or its ideology of Hindutva. The larger political idea, it was later understood, was to delegitimise Indian media in the eyes of the public.

At the same time, Modi sprinkled his “development” slogan with heavy doses of Hindu majoritarian and anti-Muslim sentiment on his social media campaign. His rise to power, effectively, did not follow any political decorum; rather most of his tweets were made to deliberately sound vindictive and hateful.

Through this, he successfully projected himself as the leader of a new India which did not follow any of the hitherto time-honoured political civilities.

Modi almost always propelled himself to the centre of all political debates, in the process turning himself into a cult instead of a political leader looking to be become the next prime minister of India through a democratic process. This led to the now popular Twitter bio-description of his followers who feel ‘blessed to be followed by PM Modi’.

“For the individual tweeters, the act of following by Modi was seen as a call to action. Overnight hundreds of people changed their Twitter profile text to mention Narendra Modi or posted that they were being followed by the man himself, and many replaced their profile pictures with one of Modi. Immediately thereafter, Modi tweeted messages encouraging the registration of young voters, and as public outreach, he copied his message to the handles of the most followed Twitter accounts in India — including those of film stars Shah Rukh Khan, Priyanka Chopra, Salman Khan, Amitabh Bachchan and Akshay Kumar; cricketer Sachin Tendulkar; and spiritual leader Sri Sri Ravi Shankar,” Pal noted.

As The Wire’s Raghu Karnad has reported, even a cursory examination of the Twitter accounts followed by Modi highlights how the action is politically useful and invariably unsavoury.

Politically useful because it helps keep his most influential online supporters motivated, but unsavoury because these handles often engage in despicable online behaviour.

While Modi’s following list has considerably ‘softened’ since 2015, as his ‘follows’  have expanded to include multiple foreign heads of state, many users on the PM’s timeline still carry out their troll-like tactics when engaging with their online opponents.

The Wire’s reportage showed that many had tweeted rape and death threats, resulting in Modi’s feed becoming a “torrent of rancour and wilful distortion”.

Each time the Opposition or the government’s critiques have raised critical issues on rising unemployment, a falling economic growth rate, or rising communal tensions, the prime minister has invariably deflected attention away from them towards whatever he and his team thinks would help his party score political brownie points.

Modi’s stunt of first “thinking about giving up” to handing over his social media accounts to women is a part of that very social media campaign that has only one agenda in mind, and that is to dominate the political and social life of India by any means.