Modi's Own Record of 'Raincoat Bathing' Is Worth Recalling

When it comes to the art of enjoying a shower without getting wet, Narendra Modi is many shades better than Manmohan Singh. 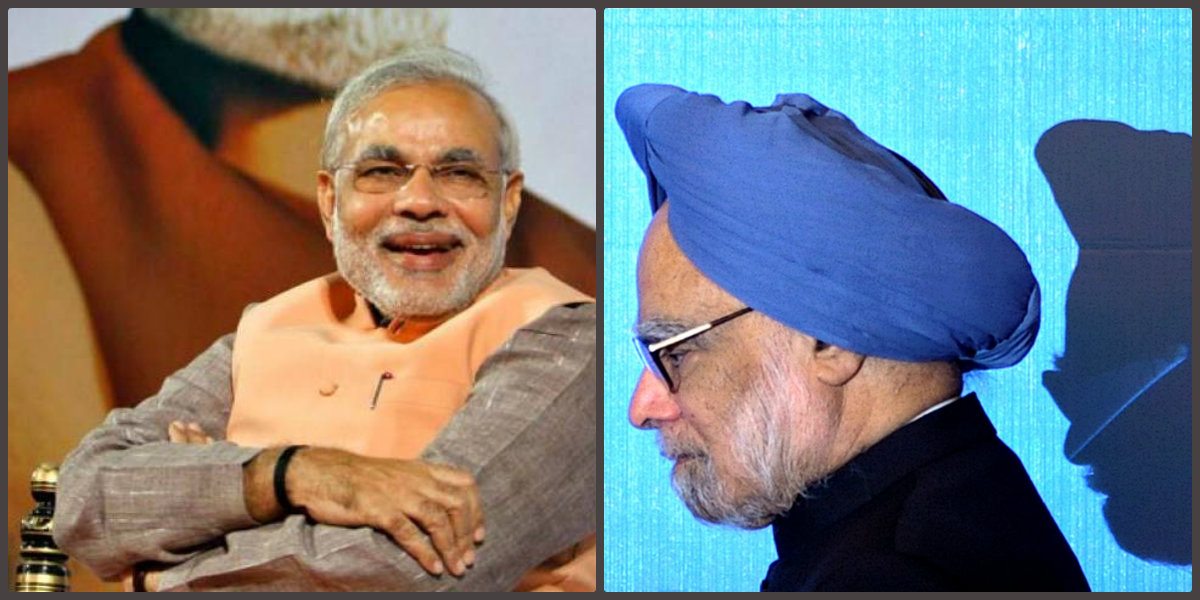 When it comes to the art of enjoying a shower without getting wet, Narendra Modi is many shades better than Manmohan Singh.

Narendra Modi is truly a street-smart politician. His ‘rain coat in a shower’ metaphor for Manmohan Singh is a simple but powerfully accurate description of Singh’s ten-year long prime ministership. He allowed scams like 2G spectrum, coal block allocations and the Commonwealth Games loot to happen right under his nose without any direct charge of personal corruption sticking to him. His staunchest critics derided him as ‘Maun Mohan Singh’ but even they could not call him a corrupt prime minister. The Congress is understandably furious at the use of the ‘raincoat’ metaphor. It has touched a raw nerve. But instead of getting worked up, the Congressmen could have well pointed out how Modi himself has been a master at the art of being seen as clean, like a lotus, while remaining immersed neck deep in muck.

For 14 years, Modi, while he was Gujarat chief minister, held the home portfolio. While his deputy minister of state for home, Amit Shah, was arrested, jailed and then externed for a spate of extra-judicial killings, the chain of evidence never travelled beyond Shah. As Shah and his loyalist police officers did time in jail, Modi reaped a rich political harvest by polarising society using these killings. His other ministerial colleague Mayaben Kodnani was sentenced to 28 years in prison for the Naroda Patiya massacre. Babu Bajrangi, who killed women and children in Patiya and later, after being released on bail, ruled the streets of Ahmedabad for several years, kidnapping girls, blocking the release of films and terrorising minorities, all along openly flaunted his proximity with the chief minister. In 2012, he was convicted and sentenced to life based on eye-witness accounts and his own confession on a spy-camera, but his statement indicting Modi was dismissed as hearsay. As chief minister, Modi presided over the killings of more than 1,000 men and women, and yet used every repudiation whether from within the party or without, every judicial stricture, every effort to inquire into his culpability, to further cement his stay in power.

In fact, when it comes to the art of enjoying the proverbial shower without getting wet, Modi is many shades better than Singh.

Comptroller and auditor general (CAG) reports on the 2G spectrum, coal blocks and Krishna Godavari Dhirubhai 6 Basin singed Singh, politically and personally. But CAG reports on the scams of the Modi government in Gujarat faded without a whimper.

In 2012, the Modi government earned strictures from the CAG for giving away a 10% participating stake in a KG Basin gas field measuring 4,57,000 acres it had won in an expensive bid to a mysterious overseas company named GeoGlobal Resources, incorporated in Barbados, with a capital of just $64, for free. As per the Modi government’s own estimates, announced in a press conference, the gas field was worth about $20 billion. Though state government-run corporation Gujarat State Petroleum Corporation (GSPC), the owner of the gas field, had spent in excess of Rs 20,000 crore in drilling and exploration costs, Geo Global’s share of Rs 20,000 crore towards expenditure cost was also borne by GSPC. The issue failed to get the attention of the national media as Modi was on the ascendance and the corporate media owners could see which way the wind was blowing. Arvind Kejriwal’s hour-long press conference on the issue was blacked out. Till date there has been no inquiry into this shady deal nor any investigation into the real operators behind Geo Global, which was incorporated just six days before the joint venture with the GSPC. A new CAG report last year indicted Modi’s Gujarat government for wasting Rs 20,000 crore of public money in an exploration process which has yielded one-tenth of what he had promised. Primetime TV refused to take cognisance of it.

Just weeks after Modi’s inauguration as prime minister, the CAG released five different reports for the year ending March 2013, highlighting financial irregularities by the Modi-led Gujarat government amounting to more than Rs 25,000 crore, which included Rs 1,500 crore in undue benefits to companies like including Reliance Petroleum, Essar Power and the Adani Group.

If the Singh government gave away coal blocks to Congress cronies for a song, Modi as Gujarat chief minister also gave away about 16,000 acres of land to Adani SEZ for rates between Rs 1 and Rs 32 per square metre. Other companies like Bharat Hotels, Larson & Toubro, Essar Steel and real estate developer K. Raheja also got large parcels of prime land for a fraction of market price. It had all the hallmark of crony capitalism: arbitrariness, private gains at the cost of the exchequer and proximity between beneficiaries and the chief minister. When the opposition’s demand for a probe into land deals reached a crescendo, in 2011, chief minister Modi appointed an inquiry commission under a retired judge, a time-tested technique of deflection and obfuscation. The report of the commission was never made public and with neither media nor courts interested in holding him accountable, the Gujarat government had little incentive to release the report. Modi’s proverbial raincoat remained intact.

For 13 years, chief minister Modi didn’t appoint a lokayukta in Gujarat. His government spent Rs 45 crore of taxpayer’s money in litigation blocking the appointment of retired justice R.A. Mehta, widely regarded as honest and competent, as lokayukta. For the last three years, Modi has not appointed a lokpal. Yet he projects himself from every pulpit as a warrior against black money.

Between 2004 and 2015, the BJP has shown more than three-quarters of its funds as cash received from unnamed sources. The same funds catapulted Modi to prime ministership. Yet he has been drumming about the virtues of a cashless economy.

As Modi’s march to Delhi was gaining pace, the UPA in a rearguard attack launched a probe into the business affairs of Gautam Adani, Modi’s principal backer. A probe by the Directorate of Revenue Intelligence (DRI) nailed the siphoning off of hundreds of crores abroad by the Adani Group by an intricate conspiracy involving over-valuation in imports for projects subject to a low or nil rate of customs duty. The report was finalised days before the results of Lok Sabha elections were due. Seeing the body of evidence against Adani, the UPA quickly moved to hand over the case to the CBI. For two years, the CBI, which reports to the prime minister’s office, is sitting tight on the file.

In July last year another, the DRI probe revealed that 40 of the country’s biggest energy companies, including Adani and the Anil Dhirubhai Ambani Group, were prima facie found involved in over-invoicing of imported coal. The scam was conservatively estimated at Rs 29,000 crore, with the common power consumers bearing the brunt of the inflated power bills, a direct effect of over-invoicing. This author has written several letters to the PMO, CBI and Enforcement Directorate detailing the report and asking for a thorough probe. Only acknowledgments have come from in return, while Modi goes on publicly embracing both Adani and Anil Ambani.

The UPA was shamed into removing Ashok Chavan after the Adarsh Scam, Suresh Kalmadi after the CWG scam, A. Raja after the spectrum scam, Pawan Kumar Bansal after a bribery scam and Ashwani Kumar after the coal scam status report scandal. No such scruples bother Modi. After more than 40 suspected killings connected with the admission and recruitment scam called ‘Vyapam’ which happened on Shivraj Singh Chauhan’s watch, Modi has not said a word about the propriety of a tainted chief minister continuing in office. Public outrage after Vasundhra Raje and her family were found to be mixed up with fugitive Lalit Modi failed to evoke a response from Modi. Addressing an election gathering in March 2014 in Chandigarh, then prime minister-designate Modi blasted the Congress for giving a ticket to the tainted Bansal. On his watch, Modi’s alter ego Shah appointed tainted B.S. Yeddyurappa, who presided over many scams including the infamous Bellary scam and whose corrupt image had compelled the BJP to expel him as Karnataka state president in April 2016. Yet Modi can afford to talk about the janam patri of the Congress without having the fear of having to account for his own track record. Modi as a prime ministerial candidate talked of bringing lakhs of crores of black money deposited in offshore bank accounts back to India. On his watch as prime minister, Vijay Mallya fled the country.

The list of Modi’s wrongdoings runs long. His omissions and commissions in the Gujarat pogrom and the subsequent subversion of criminal justice system are shocking to the conscience of a reasonable person and a “kalank” for us as a nation. His silence over episodes like the Dadri lynching is as troubling as Singh’s silence as prime minister. Though perhaps he will never to have to face an inquiry into the alleged Sahara-Birla payoffs, the swift income tax settlements facilitated by his government in both cases will go down as egregious examples of an abuse of power to protect those in power. The persecution of political opponents at the hands of police agencies, the harassment of civil rights activists and the systematic chipping away of institutional integrity and autonomy have surpassed the record of Congress regimes of the past.

Singh has never had to face criminal prosecution for any of his actions or omissions. Modi too so far has staved off a criminal prosecution. The prime minister who ran the most corrupt central government in independent India’s history ironically remained for ten long years in public imagination as Mr Clean. It was only towards the end of his stint that his sheen wore off and he became a figure of ridicule and revulsion. The present prime minister, who is running one of the most duplicitous, insensitive and arbitrary governments since independence, is similarly projecting himself as an honest man. It remains to be seen how history will judge Modi, but so far, he has managed to reap a rich political harvest from all the wrongdoings of his government and his party, without one charge sticking to him. You may attribute this to the inadequacy of our legal system that has always failed to hold the powerful to account, or to the artful device of “raincoat in the bath” as Modi himself has put it. Though their styles contrast – one professorial, the other a relentless demagogue – both Singh and Modi have made a fine art of donning the raincoat.