Besides the irony embedded in the song the prime minister recently tweeted, we need to worry about its central theme and message. 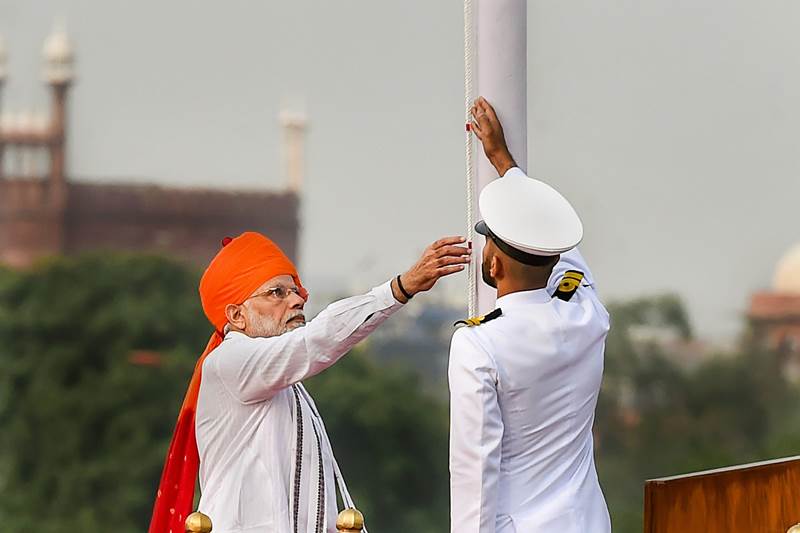 Irony, which has been in and out of intensive care units since 2014, may have finally breathed its last yesterday with the launch of Narendra Modi’s #MainBhiChowkidar campaign. In a tweet which seems to have inspired equal measures of adulation and ridicule, the prime minister declared,

Your Chowkidar is standing firm & serving the nation.

But, I am not alone.

Everyone who is fighting corruption, dirt, social evils is a Chowkidar.

Everyone working hard for the progress of India is a Chowkidar.

Today, every Indian is saying-#MainBhiChowkidar

It is, of course, rather obvious that the Bharatiya Janata Paryt is trying to blunt the edge of Rahul Gandhi’s continual “chowkidar chor hai” offensive. This tweet, which incidentally became the top trending tweet in the world for a few hours, is accompanied by a three minute and 45 second music video called “Mai Bhi Chowkidar Hoon”. The music video begins with a visual of Modi saying in Hindi, “Rest assured, your chowkidar is completely alert.”

One would have to be either profoundly ignorant of headline-making events over the last one year or be completely enamoured by the prime minister’s rhetoric to not be rendered totally slack-jawed by that statement. How did a ‘completely alert chowkidar’ allow the worst terror attack of its kind in years to take place on Indian soil in Pulwama, and that too in one of the most heavily militarised and securitised areas in India?  And how did a ‘completely alert chowkidar’ allow Nirav Modi and his uncle Mehul ‘bhai’ to flee the country with thousands of crores of rupees?

Going by the prime minister’s definition, the role of a chowkidar also seems to have expanded. No longer does it simply mean ‘watchman’. According to Modi, a chowkidar’s new responsibilities now also include fighting corruption, dirt and social evils.

Going by that logic, are Prashant Bhushan, Arun Shourie and Yashwant Sinha also chowkidars? They are, after all, pointing out huge irregularities and a looming corruption scam in the hugely controversial Rafale deal. And what about journalists and RTI activists, many of whom have lost their lives exposing corruption and wrongdoing in high places over the last five years? Are they also considered chowkidars? Does the same yardstick apply to everyone, or is one man’s chowkidar another man’s gaddar (traitor)?

What about Professor G.D. Agrawal (or Swami Sanand as he was better known), who died fasting in protest over the government’s inaction over the Ganga’s dirt and destruction? Was he also a chowkidar? And what about Swami Agnivesh, who has spent his life fighting social evils? Do the prime minister’s followers consider him a chowkidar? Because he has most certainly been treated like a gaddar, beaten up and his clothes torn, and that too, ironically on the very same day in last year in July when the Supreme Court called mob lynching unacceptable.

The lyrics of ‘Main Bhi Chowkidar’ song are worth examining closely:

(This country is my house and my garden.
I want peace and progress for everyone.)”

Those who attacked Kashmiris in the wake of the Pulwama tragedy or put up signs in their restaurants saying “Dogs are allowed but Kashmiris are not allowed” most certainly should not be singing this song, for that would be dishonesty on their part. Neither should those who feel that Muslims do not belong in India, including all those MPs and MLAs who believe that India belongs only to Hindus.

Only those who truly want peace and progress for all Indians regardless of caste or creed have the right to hum those lyrics, but the supreme irony is that it is those are the very people who are nowadays considered traitorous ‘anti-nationals’.

(He alone has begun his march, and I stand in in line to follow him
Yes, I too, am a chowkidar).”

Here, Modi is shown walking on a red carpet, saluting, and waving to crowds from atop an open vehicle. It is obvious from the accompanying visuals that he alone walks the lonely path of righteousness and blazes a trail for the others to follow, and I, as a good citizen, must walk the path shown by the prime chowkidar.

(I have made a solemn vow that I will not spread filth,
I will sound the death knell of corruption and uproot it completely).”

At this point two images flash in my head, besides the ones on the screen. One is of the ruling dispensation’s troll army, whose raison d’être basically consists of spreading filth every day on the internet about those whose voices they wish to silence. Are they watching this, I wonder? And when it comes to sounding the death knell of corruption, I can only picture Nirav Modi responding with the smallest hint of a smile, “No comment.”

(I am in complete agreement with the concept of a New India
Because I, too, am a chowkidar).”

One wonders what this New India is? Is it the one promoted by BJP MP Sakshi Maharaj in which he says there will be no more elections and democracy? And why this insistence on compliance and agreement with the thought of a New India?

(I run a small industry. I work hard.
I am responsible for the cooking in one house. I am Ujjwala).”

This line is particularly cruel, given how many small and medium industries shut down as a result of demonetisation and the Goods and Services Tax. According to the Centre for Monitoring Indian Economy, demonetisation cost India 15 lakh jobs between January and April 2017 alone. Most of these were medium and small industries.

(They may point fingers and tell lies
But they cannot fool me because I know what the truth is
I am an assault of truth on the forehead of lies).”

Violent lyrics and imagery notwithstanding, this line truly takes the cake. For a dispensation that has an entire IT cell devoted to the manufacture and dissemination of misinformation, untruths and fake news, to be talking about truth and not being fooled by lies is rich indeed.

But there is a deeper concern here, besides the irony embedded in practically every line of the song. It is the central theme and message of the song we need to worry about. A short while back at the recent India Today Conclave, Modi spoke of the dangers of not just external enemies but “internal enemies” as well. The identity of the external enemy is obvious, but it is the definition of the internal enemy that is truly fraught.

It is now quite obvious that those who speak against the designs, policies and actions of this government fall in this ever-broadening category. “Internal enemies” now includes university students, liberals, intellectuals, independent journalists, activists – basically anyone who does not agree heart and soul with the prevailing right-wing narrative.

By making everyone a chowkidar, has the prime minister just issued a national call to citizen vigilantism?