While the PM and Mamata Banerjee were expected to outplay each other in terms of political optics, the Left alliance also threw itself into the mix.

Kolkata: Prime Minister Narendra Modi’s two-day visit to Kolkata was eventful to say the least. Hours before he was supposed to land, Left students’ groups mobilised in large numbers to prevent him from stepping outside the airport.

As the crowd kept getting bigger, the Kolkata Police jumped into action to ensure a safe exit for Modi. The administration’s initial plan was to barricade the entire route from the airport to the governor’s residence at the city centre. However, they failed, forcing the prime minister to take a helicopter to travel a 16-kilometre distance.

Later in the day, Modi took a boat down the river Hooghly to visit the famous Ramakrishna Mission headquarters in Belur.

Given that chief minister Mamata Banerjee has been leading some of the biggest protest marches against the controversial Citizenship Amendment Act (CAA) and National Register of Citizens (NRC) in the last few days, the prime minister’s visit to West Bengal had been the talk of the town. It was also supposed to be a clash of two ardent political rivals; both of them were expected to seize the moment in outplaying each other in terms of political optics.

As expected, Banerjee was not present to receive Modi at the airport. Instead, she sent her loyalist and Kolkata mayor Firhad Hakim.

However, Banerjee met Modi at the Raj Bhavan, sporting an anti-CAA-NRC badge. Soon after, a photograph of the two politicians sharing stage, their faces were etched with stiffness and unease, went viral on social media.

Speaking to the press after meeting the prime minister, Banerjee said, “I came here to meet the prime minister and requested him to clear our dues. The Central government owes the state around Rs 38,000 crore. I also told him that we are against CAA, NPR [National Population Register] and NRC. I asked him that the Centre should rethink these issues and withdraw CAA.”

But that did not deter the third political force in the state, the Communist Party of India (Marxist)-led Left Front, from lashing out against Banerjee and her party, the Trinamool Congress. Its large-scale mobilisation against Modi, meant to be a twin blow to both the TMC and BJP, helped the Left Front advance its own political call, “Oust TMC, Save Bengal, Oust BJP, Save India”.

The triangular battle pitch, made more apparent by Modi’s visit, made for an interesting spectacle, and at one level threw up a picture of the complex political campaign that lies ahead of the 2021 assembly elections in the state.

As both Modi and Banerjee shared a stage reluctantly, the Left Front did its best to present itself as the BJP’s main opposition.

Senior leaders of the Left Front said that Mamata Banerjee and her Trinamool Congress party have a “tacit understanding” with BJP and both are “equally dangerous”. Senior CPI(M) leader and former parliamentarian Mohd Salim tweeted, “Narendra Modi wants Congress Mukt Bharat and Mamata Banerjee wants opposition free Bengal. None of them believe in a democratic society. The shadow boxing won’t continue for long.”

CPI(M) general secretary Sitaram Yechury also tweeted a photograph of Mamata Banerjee, saying “The voices from Bengal are loud and clear. They are against Modi and against those who strike underhand deals with the BJP.”

However, Banerjee is too experienced and wily a leader to leave her own political ground. After the Raj Bhavan meeting with Modi, Banerjee rushed to Esplanade and participated in a demonstration against the CAA and NRC, which was organised by her party’s youth wing, Trinamool Chhatra Parishad.

Demonstrations were held across the city with posters of “Go Back Modi” and black flags were flashed at multiple spots by various student groups. At one location, close to where Banerjee was speaking, a scuffle broke out between a student group and the police, who were preventing them from marching forward. Some students started asking the chief minister, “Why did you allow Modi to step in to Kolkata?” However, the chief minister’s intervention neutralised the agitated group.

While addressing the students, Mamata said, “We (Bengal), were the first to start this movement against CAA and NRC. We shall definitely not implement it.” She also said, “Students are protesting. They are our country’s pride.”

Ronny Sen, a filmmaker, who was present at the rally in Esplanade, said that the protestors were angry as they were stopped at multiple locations by the police. “They finally broke the police barricades. There was absolutely no violence.”

At the rally, Banerjee took a dig at the Left leaders’ recent comments. She said, “Those who are trying to fish in troubled waters, let me tell them that they are the biggest dalal (brokers) of BJP.”

Since the passage of the contentious Act, Banerjee has led huge rallies in different parts of Kolkata almost every other day. She has also instructed her party to organise area-wise public meetings against the NRC and CAA. 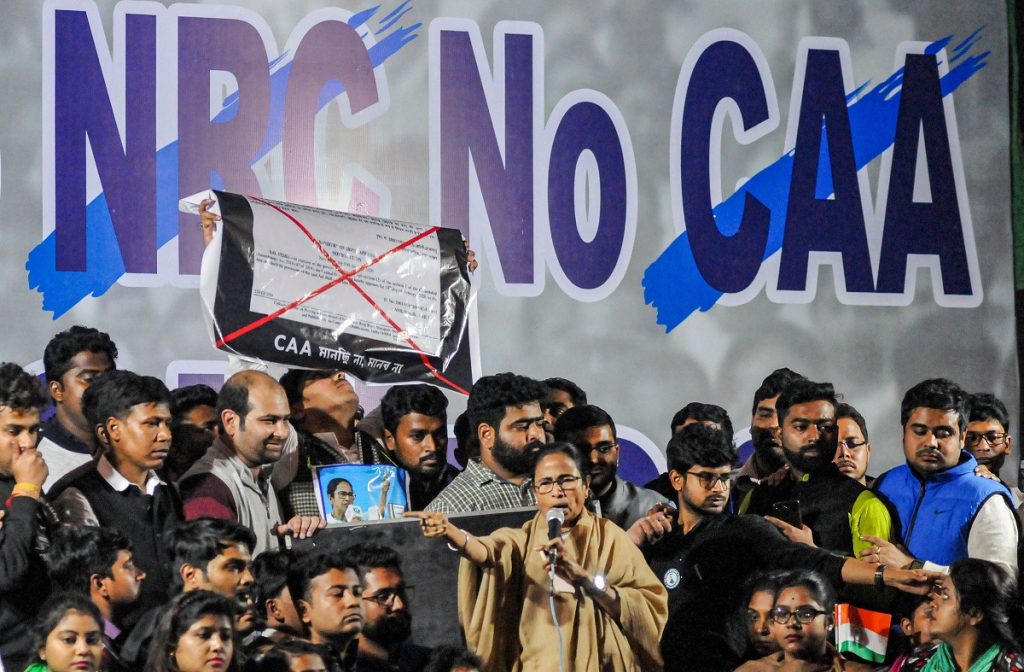 West Bengal CM Mamata Banerjee during a protest against CAA, NRC and NPR, in Kolkata, on January 11, 2020. Photo: PTI

A senior executive from the poll strategist Prashant Kishor’s firm, Indian Political Action Committee (I-PAC) told The Wire, “The gatherings against CAA and NRC in sub-urban areas and in rural Bengal are quite significant. The TMC’s local leadership has been asked to organise a meeting or rally in their respective areas every alternate day.”

When Mamata Banerjee on Thursday announced that she won’t attend the meeting of opposition parties called by Congress president Sonia Gandhi against CAA and NRC on January 13, many wondered what she was trying to do.

“I have decided to boycott the meeting convened by Sonia Gandhi on January 13 in New Delhi as I do not support the violence that the Left and Congress unleashed in West Bengal yesterday (Wednesday),” the chief minister told the state’s assembly. She was referring to instances of violence reported during the nation-wide strike called by trade unions.

Trinamool leader Om Prakash Mishra, however, told The Wire, “The Congress-CPI(M) alliance is trying to paint TMC as the B-team of the BJP. This is unacceptable. Politically and strategically, let the CPI(M) and Congress first decide on who is their primary enemy, is it BJP or TMC.”

Maidul Islam, who teaches political science at the Centre for Studies in Social Sciences in Kolkata, said Banerjee’s decision to skip the opposition party meet is well-thought-out and strategic.

Also Read: In Bengal, Will the CAB-NRC Project Boost the BJP’s Ambitions?

“Civic body elections in West Bengal are scheduled in two months. The state assembly election is due in May next year. By boycotting the opposition’s meet and blaming it on the Congress-CPI(M), she is trying to make the alliance her principal opposition, ignoring the BJP. Her attempt is to split the anti-TMC vote that the saffron party consolidated in the 2019 Lok Sabha election.”

The road to 2021 assembly elections will throw up several such moments in West Bengal, in which the three political forces will attempt to sideline each other. Modi’s visit in the middle of anti-CAA-NRC protests across the state is only the beginning of a long saga of a political dogfight that appears to be in the offing.