One Year On, Modi's Kashmir 'Master Stroke' Has Proven to Be a Massive Flop

Protest has been contained simply because the state has become a large jail. Locking up everyone can be a strategy to fight crime, but with everyone in, on whose behalf are you fighting crime, anyway? 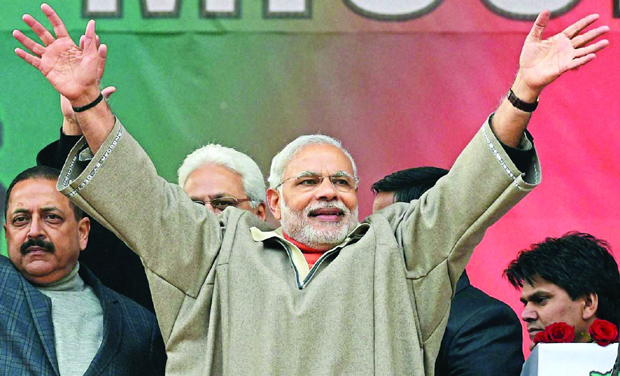 It’s been a year now that the Bharatiya Janata Party government delivered its Kashmir “master stroke”. Just like the other “greatest hits” – demonetisation, Goods and Services Tax, the Christmas Day descent on Lahore, the 9 pm-9 minute lighting plan to destroy COVID-19 – the Kashmir one has also been a flop, if not disaster.

Yes, militant leaders have been eliminated and public protest and stone-throwing prevented. Figures show that the level of violence has not really come down. Data collected by the South Asia Terrorism Portal reveals that the levels of violence were coming down at the beginning of this decade, with the lowest point reached in 2012 when 19 civilians, 18 security personnel and 84 terrorists/extremists killed. But in just eight months of 2020, 17 civilians, 34 security personnel and 154 terrorists/extremists have been killed.

It is convenient to blame Pakistan for the continuance of violence in the state, but the reality is that the August 5 decision has only increased the recruitment of locals into the separatist militancy. Pakistan, if anything, is playing a waiting game.

It is difficult to describe what happened in Jammu and Kashmir as anything else but political vandalism. A state which was part of the Union under very difficult and dangerous circumstances, was demoted and ripped apart through questionable legal means.

The highest court of the land has yet to hear the urgent issue of the constitutionality of the J&K Reorganisation Act, as well as a slew of petitions relating to the detentions of various leaders, the withdrawal of 4G services and the misuse of draconian preventive detention legislation.

Even today, we have no answer as to why this happened, other than the fact that the BJP’s founding ideology says that Article 370 needs to be removed. But the demotion of a state to Union territory status? Was this not something purely punitive? Manifested by the detention of mainstream Kashmiri leaders ranging from the pro-BJP Sajjad Lone, to the former political ally of the BJP Mehbooba Mufti and the Abdullahs – politicians who have upheld the Indian flag in the state under extremely trying circumstances. In one fell stroke, the entire spectrum of Kashmiri political opinion was declared hostile.

All this happened without any form of consultation with the people of the state, either directly through a referendum or through its elected representatives in the state legislative assembly. The notion that the Delhi-appointed governor somehow represented the 7.5 million people of the state is laughable.

Rajasthan is the latest example of how the combination of the executive and judiciary are working to deprive the people of the country of their democratic rights and processes. On one hand you have the governor preventing the elected state assembly from convening, and on the other you have the judiciary blocking moves to implement the anti-defection law.

But at what cost? The whole state has been imprisoned for the past year, deprived of political rights, modern means of communications, the internet. The reality is that protest has been contained simply because the state has become a large jail. Locking everyone up can be a strategy to fight crime, but with everyone in, on whose behalf are you fighting crime, anyway? Alarmingly, what is happening in Kashmir does have unpleasant echoes of China’s Xinjiang policy.

The army and the paramilitary forces remain a major presence, with their numbers boosted since last August. The media functions under a censorship regime, more draconian than the one that operated in the dark days of the insurgency in the early 1990s. The economy of the state is, of course, devastated. And what can one say about the judicial system when just last week, the J&K administration extended the detention of People’s Democratic Party leader and former chief minister Mehbooba Mufti by another three months – she has been held since August 5 last year – even as her petition challenging the detention has been pending with the Supreme Court since February this year?

Since the mid-1950s, the reality has been that Article 370 was something of a bogeyman. It had been systematically hollowed out by various presidential orders over the years. In the process, J&K became more closely integrated to the country. The process was long drawn out, as it should have been, given the background of the state’s accession to the Union. But the BJP saw the need to remove the article as an exercise in political showmanship aimed at signalling their animus against Muslims in the country. Now, a fraudulent delimitation of exercise is planned to gerrymander the state’s constituencies so that the salience of the Valley, which is Muslim-majority, is reduced, if not eliminated.

The whole notion that the demotion of the state was aimed at promoting economic growth is looking like a cruel joke. But it will be easy to blame COVID-19 for it. All the talk about companies fighting with each other to invest in the Valley is a chimera. In the present situation, Kashmir is simply not a place anyone would want to invest in, with or without the coronovirus.

Having put the entire Kashmiri political class on the other side of the pale, the government is now left with no alternative but to carry on with its repressive policies. An effort to create a new level of political discourse through panchayats has been a failure. The reality is that we have an angry and sullen population in the Valley.

Notwithstanding its hollowing out, the Kashmiris were content with the fig-leaf of “specialness” that Article 370 provided. Wanting to feel special is not something unusual in India. Several states in the north-east get special treatment under Article 371.

Actually, the issue is about the idea of India. It is one thing to celebrate the diversity of the country and encourage the self-esteem of the people by celebrating their uniqueness, and quite another to iron out all the differences into one uniform Hindi-speaking Hindutva nation with one history, one culture and one leader that the BJP seems to be wanting to do.