"We need Foreign Direct Investment but the new FDI is ‘Foreign Destructive Ideology’, and we have to protect ourselves from it." 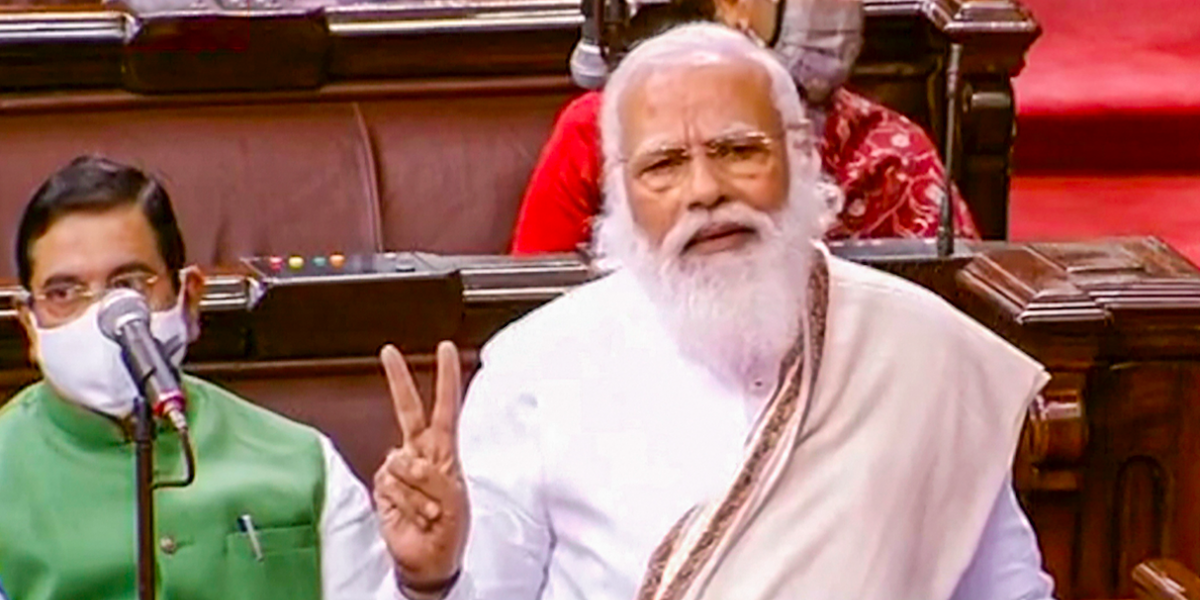 New Delhi: Replying to the President’s Motion of Thanks address in parliament on Monday, February 8, Prime Minister Narendra Modi focused on opposition leaders’ reported opinions on the farm laws, international criticism of the government’s reaction to the protest and the minimum support price regime.

The following are some of the highlights of his speech, originally made in Hindi.

After the statement by the Ministry of External Affairs and two mentions by external affairs minister S. Jaishankar, Modi became the latest top level government office holder to respond to the global flurry on the farmers’ protests.

In what could be considered a veiled reference to the tweets made by music icon Rihanna, climate activist Greta Thunberg and several foreign legislators and personalities, Modi said, according to a transcript published by Indian Express:

“The nation is making progress and we are talking about FDI but I see that a new FDI has come to the fore. We have to protect the nation from this new FDI. We need Foreign Direct Investment but the new FDI is ‘Foreign Destructive Ideology’, we have to protect ourselves from it.”

The prime minister also hit out at those protesting, saying a new crop of agitators has emerged in the country who cannot live without an agitation and the country should be beware of them.

Modi labelled those protesting ‘andolanjeevi‘, which means someone who protests for a livelihood.

“There is a new crop of ‘andolanjeevi’. They live for protests. They look for ways to start a new movement. The country needs to be aware of these andolanjeevis,” he said, according to Times of India‘s translation.

The Delhi Police, under the Centre, has been putting up unprecedented permanent barricades around farmers’ protest sites on Delhi’s borders, essentially fencing agitators in.

On the farm sector and the ongoing protest, Modi said, “MSP was there. MSP is there. MSP will remain in the future. Affordable ration for the poor will continue. Mandis will be modernised”.

Farmers protesting for over two months at Delhi’s borders have demanded a legal guarantee of MSP in addition to the complete repeal of the laws. A major concern on the new farm laws is that they will pave the way for the removal of the government’s guarantee of MSP for produce.

Modi spent some time questioning opposition parties for what he said was a sudden “U-turn” on the agriculture reforms.

Indian Express‘s translation of the this part runs thus:

“Those taking a U-Turn will perhaps agree with him [Singh]. There are other rigidities because of marketing regime set up in 1930s which prevent our farmers from selling their produce where they get highest rate of return. It is our intention to remove all those handicaps which come in the way of India realising its vast potential at one large common market.”

“Sharad Pawar ji, and those from Congress, everyone… all governments have stood for agricultural reforms. Whether they were able to do it or not, but everyone has advocated that it should be done,” Modi added.

Modi stressed that India is very proud of the contribution of Sikh people and said that some people are trying to defame them.

“This is a community that has done so much for the nation. The country takes pride in the contribution of Sikhs, but some people are trying to defame them. The words and blessings of the Guru Sahibs are precious. The language used by some for them will not benefit the country,” he said.

In his ‘Mann ki Baat’ address in the weekend following Republic Day, January 26, when a faction of protesting farmers hoisted the Sikh flag, the Nishan Sahib, at the Red Fort, Modi said, “India was saddened by the insult to the tricolour on Republic Day.

Back from a trip to West Bengal where Modi spoke in what is his first pre-assembly election speech, the prime minister singled out Trinamool Congress MP Derek O’Brien.

“I was listening to Derek ji, he had chosen good phrases – freedom of speech, intimidation. When I was listening to him, I was wondering if he is talking about Bengal or the country. He sees all this [in Bengal] for 24 hours, so he might have though that is how it is the in the rest of the country too,” he said.