Unlike earlier social media campaigns, the current effort to counter the negative perception generated by the RBI's own data has seen the deployment of cabinet ministers too. 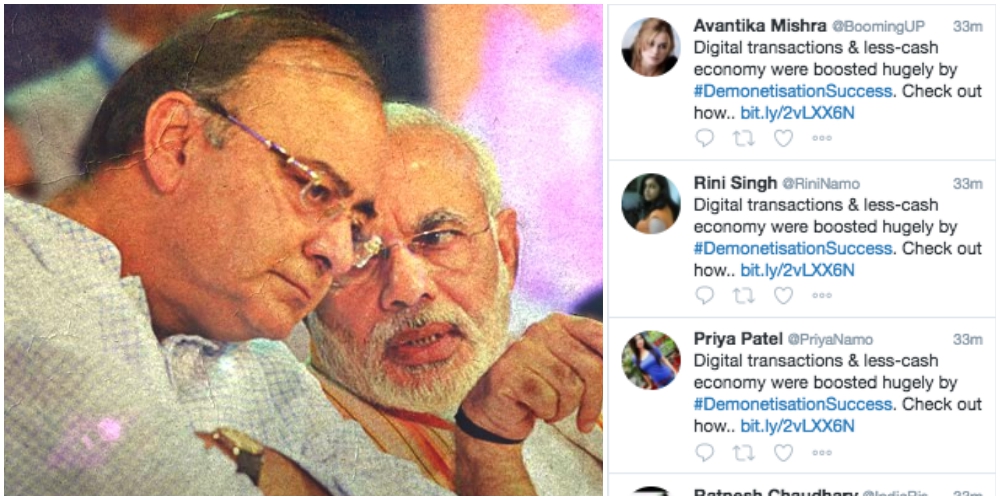 New Delhi: A day after the Reserve Bank of India’s report on demonetisation proved that the whole exercise of scrapping high denomination notes in order to detect and extinguish black money simply wasn’t worth the time or effort, a concerted campaign is underway on Twitter, WhatsApp and other digital platforms to prove that Prime Minister Narendra Modi’s big economic gamble was in fact “a success”.

In a desperate attempt to change the narrative on social media about the Modi government’s ill-planned and poorly executed exercise that left nearly 100 people dead, destroyed informal markets, took away almost 1.5 million jobs and choked the money supply – and growth – of the nation, hundreds of Twitter handles were deployed to tweet the exact same ‘facts’ using the hashtag #DemonetisationSuccess. 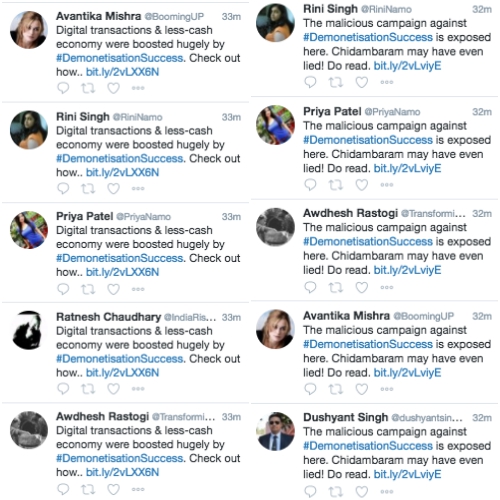 As expected, the hashtag soon started trending on top on Twitter in India.

How does forced trending work?

Usually brands and political parties hire PR agencies who employ social media ‘influencers’. These influencers run multiple social media handles and usually have a huge following. They are provided a brief about the campaign that contains some sample tweets, a list of people they should attack, the timing of the tweets, etc.

Unlike similar campaigns in the past, the #DemonetisationSuccess effort wasn’t just about garden-variety trolls pushing the agenda. This time, even cabinet ministers have been deployed by the BJP’s high command to push the party line.

Ironically, the government doesn’t seem to have faith in the ability of its ministers to creatively argue the case for demonetisation actually being a success. The ministers were all seen sending out the same templated tweets that had been sent out to ordinary footsoldiers. 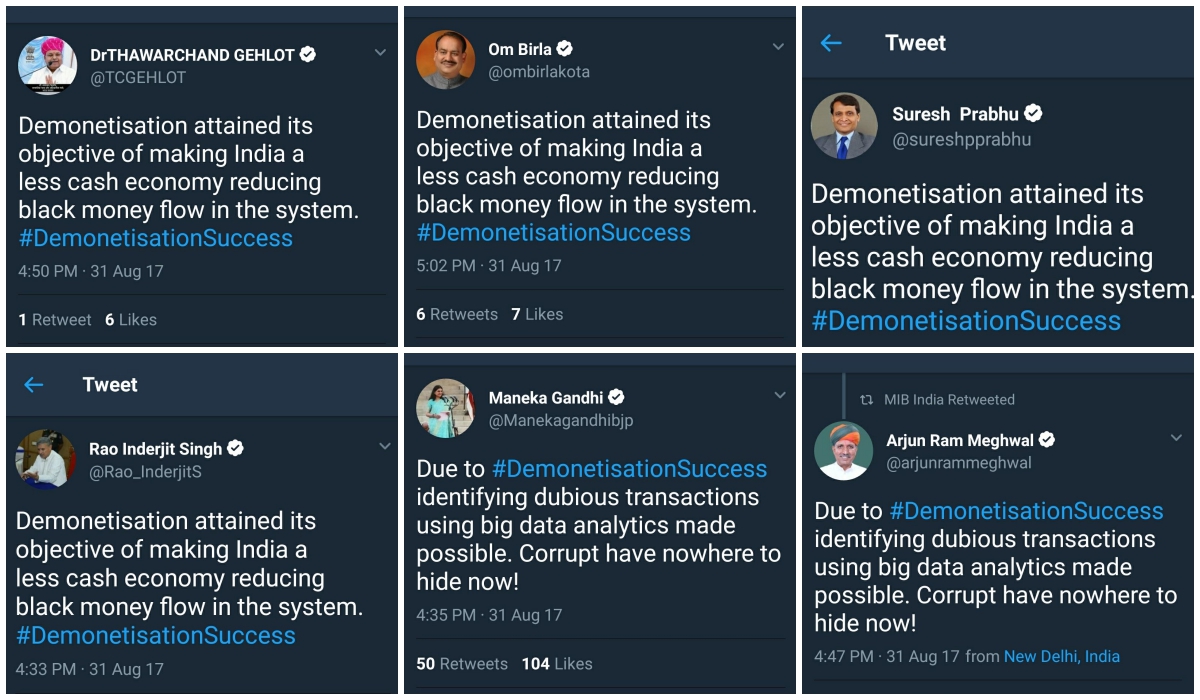 Incidentally, the messages they tweeted are also being sent out to smart phone users who have downloaded the Narendra Modi app. 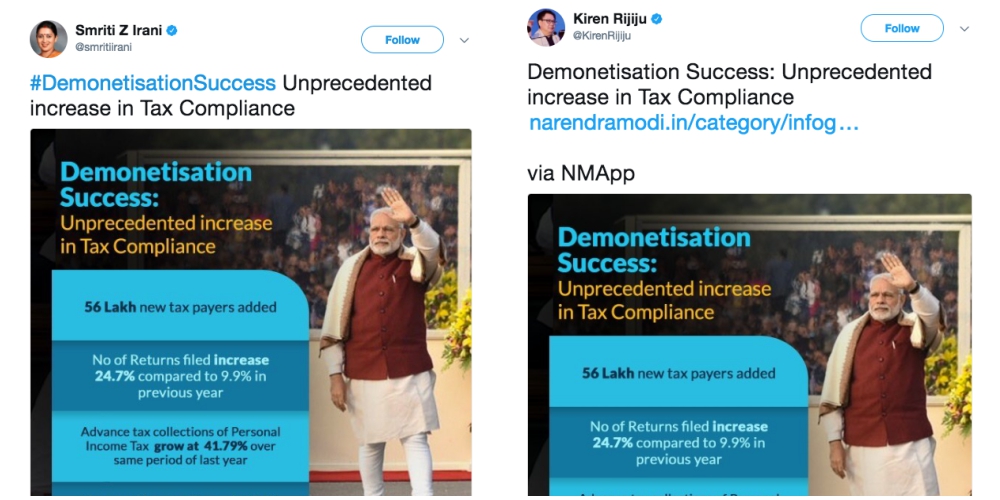 Multiple RTIs filed by the Economic Times revealed that ministries have been paying agencies as much as Rs 2 crore a year to manage social media.

The practice of hiring social media influencers to counter bad publicity has been seen a number of times over the last year in the Indian context.

A similar campaign was run to “prove Uttar Pradesh CM Adityanath’s innocence” after over hundred infants died in his constituency.

The use of paid social media trolls to spread positive messages about demonetisation was extensively documented by FactorDaily in December 2016. 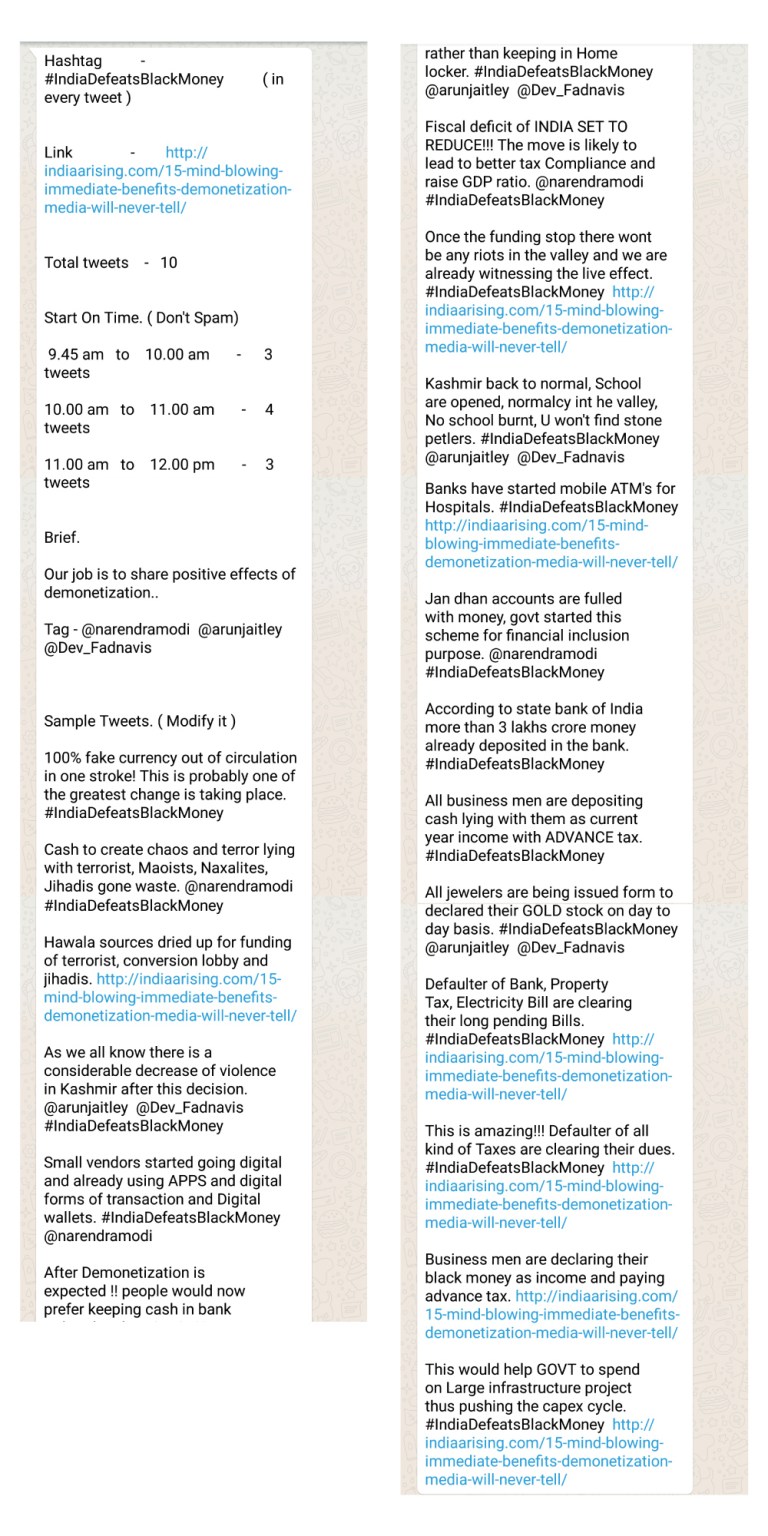 News channels too have adopted similar practices in the past to make hashtags trend.

That awkward TimesNow moment when you carefully plan a paid campaign asking for no spelling mistakes & and they repeat yours ?? h/t @MehekF pic.twitter.com/RGpdJrfiNs

How to make a hashtag trend, @TimesNow-style.

What impact the government’s social media hard sell on demonetisation will have on public perceptions remains to be seen.