Modi, ‘King of Gods’? The Malaise of Competitive Sycophancy That Plagues the BJP

The BJP, after its formation in 1980, witnessed a collegial style of functioning and this practice continued till 2014. Since then, Narendra Modi's idolisation by the party has been institutionalised. 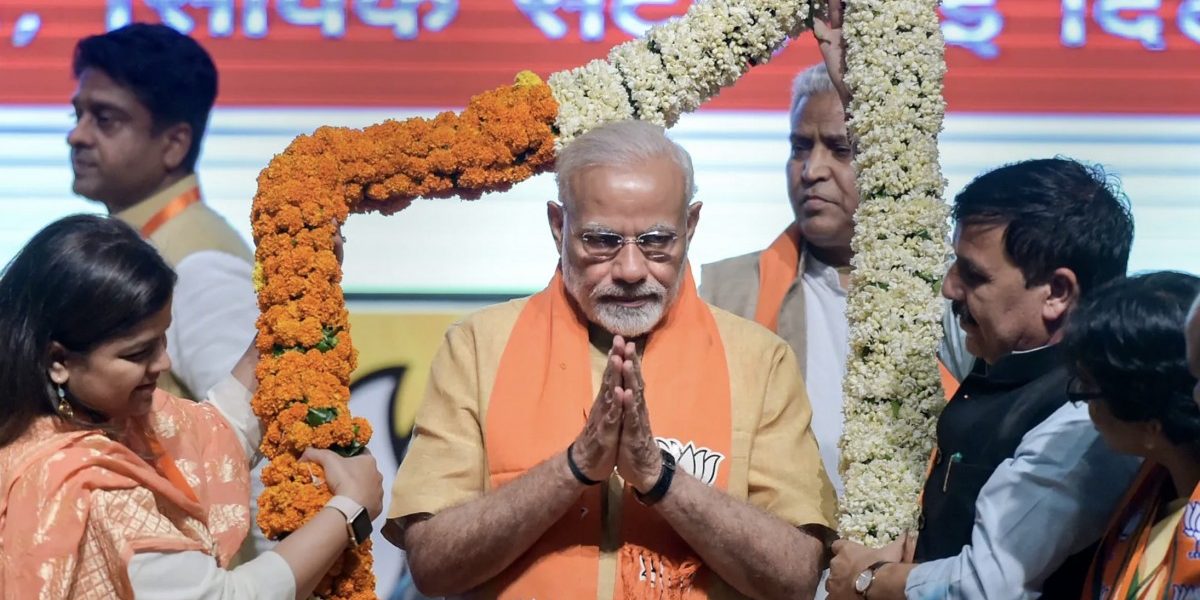 An old video calling attention to the obtrusive arm of India’s authoritarian democracy, one whose existence I had consigned to the back of my mind in the interests of retaining some optimism over a two-year-long, pandemic-induced claustrophobic existence, was forwarded to me over WhatsApp recently.

It gave a fresh wind to a hypothesis I have been pondering for several years because I was not sure how its articulation in public would go down with the current political dispensation.

But it was important to do some fact-checking first. With fact-checkers in the news, not always to their benefit though, it is better to be prudent than to give in to the attraction of the ‘fastest finger first’ game. Being sure of the authenticity of the video contents was particularly necessary in this instance, because the forwarded message provided a link to a tweet by a journalist with whom I have never interacted.

The ‘tatoring’, or cross-checking, took me to varied sources, including videos shared by Bharatiya Janata Party president J.P. Nadda and Union Minister for Tourism G. Kishan Reddy. While the former’s post was on Facebook and Twitter, the latter’s tweet (he was then Union Minister of State for Home Affairs) provided a link to an almost two-hour long video.

Both posts were dated June 21, 2020 – barely weeks after the first and most stringent, nationwide COVID-19 lockdown was lifted, when the country was struggling to come to grips with the impact of the harsh measures taken during the lockdown. The video was a recording of a virtual BJP event for party workers in Uttar Pradesh – UP Jan Samvad, at which several BJP leaders, including Nadda and Uttar Pradesh chief minister Adityanath, delivered speeches.

He paraphrased these words while reiterating his contention a few seconds later, possibly to ensure that those in the audience did not think that they had misheard the incredulous statement the first time.

Nadda’s words, re-posted by a significant number of BJP functionaries and activists, were actually uttered in response to Rahul Gandhi’s tweet with a typographical error: “Narendra Modi is actually Surender Modi”, a charge of surrender levelled after the skirmish in Ladakh with China that left Indian forces on the back foot.

Peculiarly, instead of ridiculing Gandhi for not spellchecking the tweet against Modi before hitting the tweet button, Nadda chose to find meaning in the misspelt word by converting an intended verb into a proper noun – as if Gandhi had actually described him as ‘Surender’.

Nadda changed Surender to Surendra, a minor alteration, because most people from a particular geographic region of India pronounce the two words in the same way.

Now, Surendra is one of the many names of Lord Indra, the mythological king among Gods. The moniker, if broken down, emerges from two distinct words: Sura (a deity) and Indra (chief).

Did Nadda’s bit from that speech articulate his belief that Modi is indeed ‘suron ke bhi neta‘, or ‘leader of the Gods’? After all, mocking Rahul Gandhi is standard BJP fare. But, in this instance, the typographical error was interpreted as a correctly affixed alternate description of the prime minister.

Does this description of Modi outdo the infamous statement of erstwhile Congress President D.K. Barooah during Emergency – “India is Indira, Indira is India”? Is Modi being called ‘the king of Gods’ (as Nadda actually refers to him in the above-mentioned video), one notch higher in the Indian index of sycophancy?

Was Nadda’s a one-off performance in June 2020 on a day when he wanted his name and words to ring pleasantly in Modi’s ears? Or, was his declaration merely a reflection of the malaise of competitive sycophancy that has been plaguing the BJP for the past several years?

Answers to each of these questions, in the affirmative or negative, will be based on subjective assessment. Before making a case for either, it is appropriate to recall a recent development that established the current regime’s propensity towards hallowing PM Modi.

Earlier this month, Vijay Kumar Sinha, speaker of the Bihar assembly, made three against-the-grain choices. On the occasion of a function to mark the centenary year of the Vidhan Sabha building, he usurped the power of the Vidhan Sabha secretariat by sending out invitations for the event in his name instead the House Secretary’s.

Not just that, the names of Bihar governor Phagu Chauhan, chief minister Nitish Kumar, and leader of opposition Tejaswi Yadav were conspicuous by their absence on the invitation card. This omission was despite it being known that the three would attend the function.

Finally, the only name besides Sinha’s in the card was Modi’s and this went against the tenets of the state assembly being a bipartisan institution. This deliberate omission is more conspicuous, for while Sinha is from the BJP, after becoming a presiding officer, a political leader is expected to act impartially.

It has been evident for several years that the BJP has strayed from the Sangh Parivar’s principle of putting the organisation over the individual, or the leader. While in its early decades, personality cult was part of the Rashtriya Swayamsevak Sangh ethos, this was frowned upon after Balasaheb Deoras became the sarsanghchalak in 1973.

But the BJP, after its formation in 1980, witnessed a collegial style of functioning and this practice continued till 2014. In October 2015, former party president L.K. Advani and several other stalwarts in a statement said that the party was being “forced to kow-tow to a handful” and that its “consensual character” had been “destroyed”.

Instead of reviewing party functioning as the veterans asked for, the culture of fawning over the leadership (read Modi) continued unabated in the party. In March 2016, it became evident that the sycophancy bug had indeed bitten even the top echelons of the BJP when M Venkaiah Naidu, then a cabinet minister, described Modi as “god’s gift to India” and a “messiah of poor”.

The latter assertion could be seen as a display of hyperbole from a party leader, but even so it was certainly an indication of the growing personality cult within the BJP. In fact, Naidu was not the only one to make such a fawning statement about Modi – he was preceded by junior minister Kiren Rijiju who declared that Modi’s rise had been predicted by Nostradamus.

Over the past few years, Modi’s idolisation by the party has been institutionalised. The 13-page political resolution adopted by the party’s national executive in Hyderabad earlier this month mentioned Modi’s name 20 times.

Also read: A BJP Loyalist’s Indictment of His Party 20 Years Ago Comes Alive in Modi’s India

In February 2021, weeks before the devastating second wave of the COVID-19 pandemic, the BJP claimed in a resolution at a national executive meeting that “India not only defeated Covid under the able, sensitive, committed and visionary leadership of Prime Minister Shri Narendra Modi, but also infused in all its citizens the confidence to build an ‘Atmanirbhar Bharat’.”

That 10-page resolution also mentioned Modi as many as 29 times. The words and phrases in the two resolutions draw attention to the culture of deification that is part of the BJP now – able, sensitive, far-sighted, humanitarian, indefatigable, visionary, charismatic, strong, dynamic, determined, new phenomenon, constructive step, pro-poor, a leader who will stand tall at all times and a true people’s leader, to give a few examples.

Significantly, a quick count of the laudatory adjectives shows that these were used in greater frequency in the July 2022 resolution than the document adopted in February 2021, showing that the personality cult that has grown around the prime minister has gained strength.

While sycophancy is not prevalent in India alone and is manifest in different ways and to varying degrees globally, it is more pronounced in nations ruled by populist leaders.

In India too, there is barely a political leader who does not prevent lesser mortals from toadying to them – using gigantic garlands, expensive bouquets (mostly paid by the exchequer), draping shawls and so on.

This tendency is not restricted to the political arena but is prevalent in every sphere. Eulogies are common in every public event for the ‘chief’ guest or ‘patron.’ Traders display a sari with printed images of Prime Minister and Indian Army inside their shop in Surat. Photo: Reuters/Amit Dave

In public life, why don’t leaders sternly discourage their idolisation by the party? Do these leaders, who like a constant reiteration of their supremacy, essentially seek such reassurances to camouflage an insecure core?

In the course of four decades in the media, one has witnessed diverse expressions of sycophantic behaviour by those who grovel and the ones who are fawned upon.

The majority of the liberal and progressive group who are disparaged by the current regime, have spent a greater part of their careers criticising previous governments and their leaders for promoting a culture of sycophancy, among other issues.

In these four decades, the BJP held out the promise of being a ‘party with a difference’.

As adulation for Modi becomes more thunderous, it is pertinent to ask if the BJP’s commitment to majoritarianism – the idea that every citizen is Hindu and part of Sanatan Dharma – and its lip service to democratic principles makes for a far more worrying scenario than an earlier juncture when another party steeped in sycophantic culture was in office.

This phase of sycophantic culture in the BJP is merely the tip of the iceberg, and is a portent of the things to come if this regime continues to remain in power.

Nilanjan Mukhopadhyay is an NCR-based author and journalist. His latest book is The Demolition and the Verdict: Ayodhya and the Project to Reconfigure India. He has also written The RSS: Icons of the Indian Right and Narendra Modi: The Man, The Times. He tweets at @NilanjanUdwin