An Indian Kristallnacht in the Making

The Hindutva project is under way and only a sustained campaign of resistance can stop it. 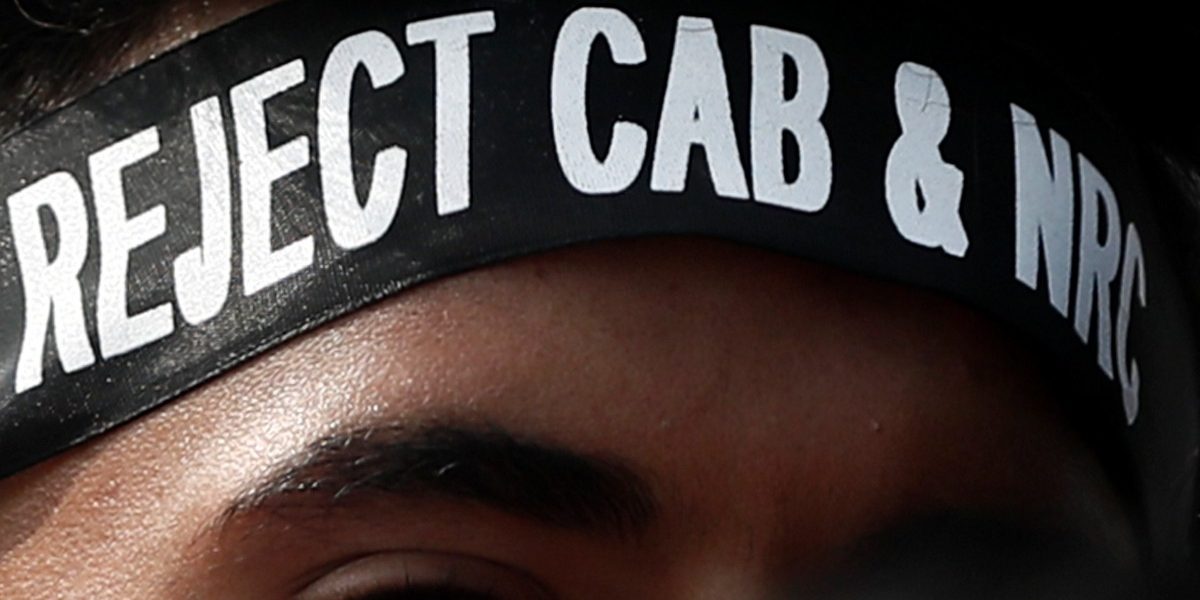 A man wearing a headband attends a protest against a new citizenship law, on the outskirts of Mumbai, India, December 20, 2019. Photo: Reuters/Francis Mascarenhas

Over the last few years, the brutal years of Hitler’s reign have often been invoked to compare the situation in India now with Nazi Germany in the 1930s and ‘40s. Memes showing Narendra Modi as Hitler and the RSS as modern day Nazis are popular and were seen on many placards during the anti Citizenship (Amendment) Act-National Register of Citizens protests these past few days.

Such comparisons are always simplistic, to say the least, and while the early RSS leaders were greatly inspired by Hitler and, less known, by the Mussolini brand of fascism, we need to also acknowledge that the contexts are vastly different. Hitler was a product of his time in a particular social environment, while Modi and his party as well as the larger organisation behind them are peculiar to India.

The parallels are there, of course, but throwaway references to fascism lose their potency and become facile, which is of little help while studying a particular phenomenon. The Hindutva brigade may have learnt from the Nazi playbook, but they bring to it their own, homegrown band of fanaticism, laced with deep rooted prejudice and deadly intent.

Even so, reading and knowing history can be a great help in understanding what is going on and how things could unfold in the future. The rise of Hitler shows us how democracy can be subverted from within, using all the levers of democratic processes. All over the world, the new despots were elected by their people who turned towards them for guidance and leadership. And, while  these leaders – Donald  Trump, Recep Tayyip Erdogan, Rodrigo Duterte and in India, Modi – unleash some of the most anti-democratic forces on their respective countries, they are cheered on by their supporters.

“There was much that impressed, puzzled and troubled a foreign observer about the new Germany. The overwhelming majority of Germans did not seem to mind that their personal freedom had been taken away, that so much of their culture had been destroyed and replaced with a mindless barbarism, or that their life and work had become regimented to a degree never before experienced even by a people accustomed for generations to a great deal of regimentation,” William Shirer, who came to work as a correspondent in Germany in 1934 wrote later in his monumental book The Rise and Fall of the Third Reich.

Nazi ideology was already spreading and was to reach its full bloom a few years later, when new history books were introduced in school, youth groups were formed and a massive exercise of purging any renegade intellectual, artist or academic was under way. Jews were being demonised and laws were being enacted to exclude them from public and economic life. The Nuremberg laws of 1935 deprived them of citizenship, turning them into non-citizens and, effectively, stateless. It forbade marriage between Jews and ‘Aryans’. By 1936, “when the Germany which was host to the Olympic games was enchanting the visitors from the West, the Jews had been excluded either by law or by Nazi terror – the latter often preceded the former– from public and private employment to such an extent that at least one half of them were without means of livelihood,” Shirer writes. 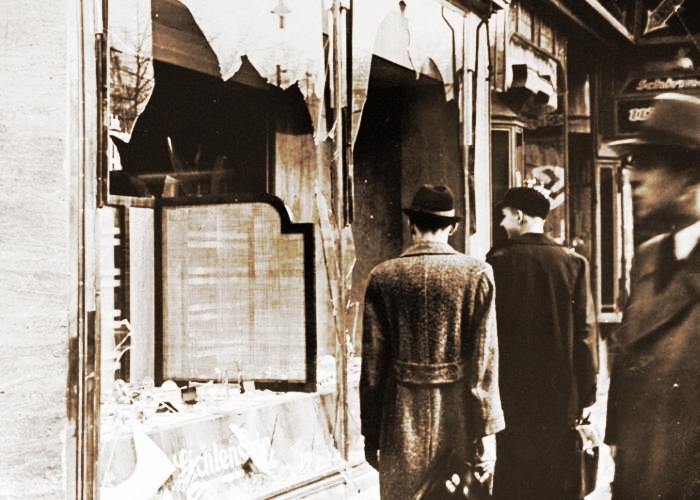 An archival photo from November 10, 1938, showing broken shop windows in Berlin a day after the Nazi pogrom known as Kristallnacht concluded. Photo: notionscapital/Flickr, CC BY 2.0

These policies came to a head in November 1938, when the Nazis unleashed waves of violence against Jews all over Germany and recently annexed territories in Austria and Czechoslovakia. Triggered ostensibly by the assassination of a German diplomat in Paris by a Polish Jew – whose parents were among the many Polish Jews expelled from their longtime homes in Germany – the violence was led by Nazi storm troopers and Hitler Youth.

Over two days, the storm troopers, wearing civilian clothes, destroyed businesses and homes owned by Jews, burnt down synagogues. Jews were attacked in their homes and humiliated. Over 90 people were killed, hundreds were injured, and 30,000 Jewish men were arrested and put in detention centres. It was the first time Jews were incarcerated on such a massive, organised scale. Insurance payouts to the Jews were confiscated and Hermann Göring blamed the Jews themselves for the violence and imposed a massive fine on the community.

The pogrom, which came to be known as Kristallnacht (night of broken glass), because of the shattered shards on the street, made headlines around the world. Countries and leaders which had largely ignored the rise of Nazism in Germany, were jolted into action. US President Franklin D Roosevelt denounced the attacks on Jews and recalled its ambassador.

Kristallnacht was the first step that led to the Holocaust and the Final Solution. A combination of laws, terror, social ostracisation and economic boycott ensured that the Jews were not just reduced to second class status, but were simply eliminated. By the time the war was over, six million Jews were killed in the concentration camps, mainly in the gas chambers that were set up.

Also read: Why I Will Not Register With the NRC

Germans went about their daily routine, many of them supportive of Hitler’s policies, others keeping their heads down, and still others preferring not to speak up. Many (non-Jew) Germans fled to other countries, mainly the US – a few died on the way. There was no active resistance to Nazi terror, and many perfectly ordinary and decent citizens were ready to do the state’s bidding – they were ‘just following orders’.

Echoes of that horrible past are now being heard in our own country. Prejudice at the ground level against Muslims is common and in the aftermath of the mass killings in Gujarat in 2002, the more rabid Hindutva organisations openly called for not selling property to Muslims. Narendra Modi, during his election campaigns in the state used to make several snide references to Muslims and has continued the tradition during his prime ministership, unmindful of his constitutional duty to be secular. His colleagues in the BJP are more direct, declaring that they will drive away Muslims from the country. And now the CAA-NRC will institutionalise that process.

What should immediately concern us is the events in the last few days in Uttar Pradesh where Muslims are being targeted by the forces of the Adityanath government. Adityanath is one of the most rabid and polarising figures in the Hindutva pantheon, and undoubtedly elevated to the chief ministership for those very traits. Since he has assumed office, he has systematically gone about not just marginalising Muslims but also initiating a number of symbolic gestures – renaming towns with Hinduised names – to show Muslims their place. The idea is to beat them into submission and at the same time hope they retaliate, which will give the perfect excuse to go after them even more violently.

The anti-CAA-NRC protests have given him the opportunity to unleash his forces on Muslims. People (in some case not even protestors), have been beaten up, Muslim properties have been destroyed, and at least 18 people, including an eight-year-old boy have been killed. Eyewitnesses have said that not just the police, many in plain clothes too participated in the violence and looting. Adityanath’s government has ‘auctioned’ properties of those who took part in the protests. A systematic plan is in motion to terrorise the Muslims of UP.

This has to be seen in the wider background of the CAA-NRC which will effectively marginalise Indian Muslims. Those who will not be called ‘ghuspetiyas’ (infiltrators) – and that could be anybody – will find themselves reduced to second class citizens. Debating whether Narendra Modi contradicted his home minister Amit Shah on the roll out of the NRC is a pointless distraction. The government is merely buying time. The construction of the detention centres is already underway.

The massive protests all over the country are heartening and show that the secular conscience of this country is still a living, breathing thing – it has not been deadened even by the hate mongering of the past few years. Indeed, this hate may have even breathed new life into it. The blatantly communal CAA-NRC exercise may have been the trigger, but the protestors who came out on the streets were expressing their pent up anger at the Modi dispensation and all that it has brought with it – bigotry, intolerance and narrow-mindedness. All this and poor economic management too.

The government may not admit it, but this upsurge of collective fury is a sign that the Hindutva project has gone too far. With a combination of repression, double speak and propaganda, the Modi government may think it will ride out this storm, but it will not have it easy from now on. And that is an encouraging sign.

In these modern times, a Holocaust may not be possible, but that’s no reason to be complacent. The world’s knowledge of the horrors of Nazism did not prevent the killings in Cambodia or Rwanda. Other massacres have happened before the global community has stepped in. India still evokes respect for its democratic traditions – besides, the lure of business opportunities always trumps human rights concerns. Nor can we simply wish away the vocal – and silent – support this government may have. The world will move on to other things and protestors too will get busy with their lives. The international outrage over Kristallnacht in 1938 did not stop the Nazis from achieving their evil goals. An Adityanath cares not a whit about what anyone thinks, and his bosses like him for that. The next phase of achieving Hindu rashtra has begun and only sustained resistance can stop it.