Narendra Modi's Speech in Parliament Made His 2019 Campaign Priorities Clear

Consistent and unrelenting attacks on the Gandhi family and projecting himself as the sole guardian of national security will be the prime minister's two biggest electoral planks. 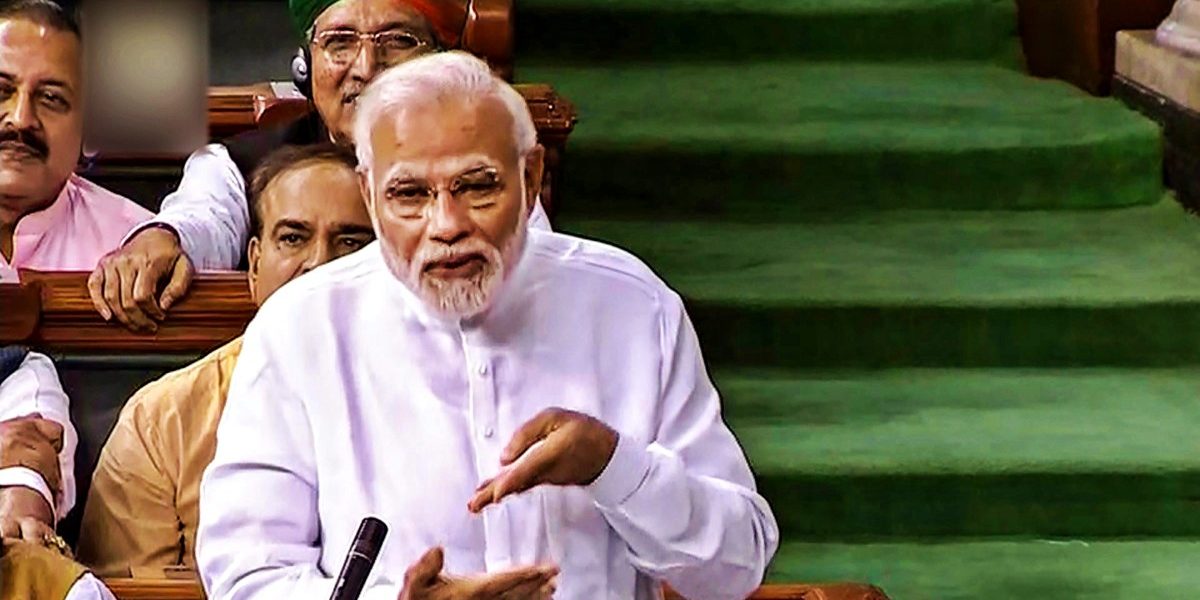 Going by some of the issues he raised, Prime Minister Narendra Modi virtually launched his 2019 Lok Sabha campaign during his reply to the debate on the no-confidence motion. A key, indeed dominant, element of the speech was Modi’s return to the default option of attacking the Gandhi family and its history of “betraying” leaders like Subhash Chandra Bose, Sardar Patel, Chaudhary Charan Singh, Chandra Shekhar, Morarji Desai and more recently Pranab Mukherjee.

As usual, Modi effortlessly mixed half-truths with untruths in this enterprise. This has been Modi’s theme since 2014, and is aimed at politically isolating the Gandhi family and demonising the Congress in the eyes of regional parties and their leaders. In practice, however, Modi’s conduct has achieved exactly the opposite result in the last four years. In a way, the no-confidence motion was also a direct result of the Bharatiya Janata Party’s growing alienation from regional political forces, both allies and those in the opposition.

However, the sheer irony of this situation was totally lost on Narendra Modi, who in his reply to the Lok Sabha debate kept rhetorically asking why a no-confidence motion was at all brought against his government which was so “strong and stable”. Well, Mr Prime Minister, it was brought because your largest ally, the Telugu Desam Party, had walked out of the NDA alliance citing wholesale “betrayal of the new state of Andhra”. Your second largest ally, the Shiv Sena, chose to abstain from voting. And these political events have occurred in the midst of an all-round failure in meeting promises on the economic front, whether they relate to jobs, growth or farm incomes.

If Modi remains smug after all this, credit really must go to his well-designed echo chamber, which does not allow real feedback to filter through. Or when such feedback does come, it is sanitised by the officialdom, as had happened in the case of a woman farmer from Chhattisgarh who told Modi in a video conversation that her farm income had doubled, but later private TV channels discovered the contrary after speaking to her and others in her village.

That the National Democratic Alliance regime is totally vulnerable when it comes to facts and data was evident in the way TDP MP Jayadev Galla systematically demolished all the claims made by the Centre in recent months with regard to unkept promises of resource assistance made to Andhra. Galla lamented that the Centre had allocated less funds to build Andhra’s capital city, Amaravati, than the money earmarked for a statue of Sardar Patel in Gujarat. Overall, he said barely 2-3% of the funds required by the new state had been allocated.

Galla ended his speech with a telling quote from Sardar Patel, who had warned that if you ignore reality, facts have their own way of taking revenge.

Modi must take this warning seriously and not delude himself with data fed into his echo chamber suggesting all is well with the economy and that one crore jobs have been created in 2017-18. How can one crore jobs be created when export growth is negative, real estate construction is yet to revive and industrial production growth is still sputtering? However, the prime minister told the Lok Sabha with total conviction that job growth had fully revived and that the global agencies have endorsed India’s growth story.

Politically, he kept attacking the Congress and Gandhi family, saying they had “lost all self-confidence. If they have lost confidence in themselves how can they have confidence in me?” he asked.

It is clear that consistent and unrelenting attacks on the Gandhis and projecting himself as the sole guardian of national security – especially with reference to Pakistan and China –  will formally be his two biggest planks in 2019. Of course, the communal polarisation game will be played by the cadres and second level leaders on a different plane. That seems par for the course now.

Inspite of Modi’s boast that the next vote of no-confidence against him would come in 2024, the Lok Sabha debate clearly showed that the opposition parties have indeed been infused with a new energy after recent victories in by-elections and the way the BJP was delivered a shock in Karnataka.

For one, Rahul Gandhi has become far more confident and strategic in his approach. Quite apart from the optics of his “hugplomacy”, his speech was direct and very effective in the way it raised the question of how the Rafale deal was overnight taken away from experienced HAL and given to a private sector company with no experience and heavy indebtedness. Modi was taken aback by the directness of the Rafale reference. The prime minister may have given a wishy-washy reply, but the issue is not going to die easily. Indeed, the fact that the government moved heaven and earth to get a clarification from France tells its own story. Gandhi must continue to ask for details of the Rafale deal which can be made public. There is no historical precedent for the price of a fighter jet being kept a secret. The matter is being examined by the comptroller and auditor general currently. Why HAL was jettisoned and Reliance brought in as a partner in the eleventh hour also needs explanation. This can’t be a secret by any reckoning.

Many of these issues will keep surfacing in the run up to the 2019 polls. The one reality which must remain hidden till the very last moment is what sort of support Modi can expect from within the Sangh parivar if the BJP gets about 200 seats or less. Could there be a coup from within aided by regional parties and former allies like the Shiv Sena, TDP, Biju Janata Dal etc.? The fact is that Modi’s relations with regional leaders, in general, is at an all time low. This is bound to impact the Sangh’s choice of a leader if the BJP were to fall substantially short of a majority. This is something even Modi and Amit Shah cannot anticipate today. And this makes the 2019 elections so much more interesting and intriguing.