His address, undoubtedly riding high on the symbolic victory of the BJP over the Ayodhya verdict, was one of the very few where he called for syncretic living among those of all faiths in India. 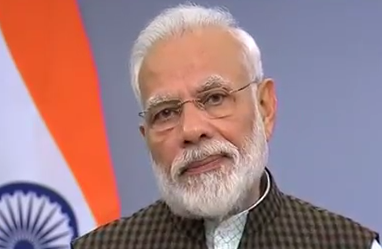 New Delhi: In a nationwide address on the evening of November 9, Prime Minister Narendra Modi hailed the herald of what he said was a ‘new dawn’ – harnessing not just the Ayodhya verdict and the Kartarpur corridor but also the 30th anniversary of the fall of the Berlin Wall.

“The whole country wanted that the Ayodhya case be heard daily. The Supreme Court has pronounced its verdict on such a case which has centuries of history behind it. A decades-old legal process has come to an end now. Friends, the whole world knows that India is the largest democracy in the world. Today, the world has come to know how strong and lively India’s democracy is,” Modi began by saying.

There was little doubt about what Modi would choose to speak on when agencies began flashing the news that he would address the nation at 6 pm. With the Supreme Court’s Ayodhya verdict arriving in the morning and the inauguration of the Kartarpur Sahib corridor by Modi himself this afternoon, November 9 was rich with significance for a leader who sees politics and religion as inseparable.

While the Ayodhya matter went in favour of the Hindu parties and is a fillip to the BJP, Kartarpur earns the Modi dispensation the goodwill of the Sikh community.

His address, undoubtedly riding high on the symbolic victory of the BJP over the Ayodhya verdict, was one of the very few where he called for syncretic living among those of all faiths in India.

“The way each community and people from each walk of life accepted the verdict is a mark of India’s heritage and tradition. ‘Unity in diversity’…this phrase has bloomed in full. I feel pride that thousands of years later, if someone has anything to say about India and its democracy, they will find this instance to cite. India is writing a new chapter in its history and a new chapter in its judiciary,” he said.

The calm and peace maintained by 130 crore Indians in the run-up to today’s verdict manifests India’s inherent commitment to peaceful coexistence.

May this very spirit of unity and togetherness power the development trajectory of our nation. May every Indian be empowered.

Indeed, Modi had much praise to offer the judiciary. “Even in a household, finding a solution to a small skirmish is not easy, but the Supreme Court deserves praise for the way it has handled this case…We must learn from the verdict that patience is a virtue. India’s constitution and judiciary are its glorious tradition. it is importance we believe in it. The SC verdict has heralded a new morning for us,” he added.

Modi also said that the time had come to abide and respect the “new laws of the land, more than ever before.”

SC’s Ayodhya Judgment is notable because:

It highlights that any dispute can be amicably solved in the spirit of due process of law.

It reaffirms the independence, transparency and farsightedness of our judiciary.

It clearly illustrates everybody is equal before the law.

While the address by the prime minister was relatively simple in reach and rhetoric, his attempt to equate the day’s developments with another historically significant event – the fall of the Berlin Wall – was awkward since the Ayodhya issue is synonymous with the ‘fall’, or demolition, of the Babri Masjid in 1992 by leaders and activists on Modi’s side of the political fence.

“On November 9, the Berlin wall was broken down. Today, on November 9, the Kartarpur Sahib corridor has been opened. India and Pakistan have both cooperated. With Ayodhya too, this date has given us reason to celebrate together. Going forward, we have to unite, come together and live together,” he said, and then added: “In new India, there is no scope for bitterness.”

Multiple times, Modi asked people to ‘build a new India,’ or to ‘unite and go forward’ and to ‘work for the future, towards new goals’.

“We have many goals, many elections, many things to look forward to,” Modi said, before ending his 11-minute speech with wishes for Eid. Milad un-Nabi or the Prophet Muhammad’s birthday is being celebrated between November 9 and 10 this year.

The promise for a Ram temple to come up at the disputed site in Ayodhya has been an enduring poll plank for the Bharatiya Janata Party.