The prime minister’s ringing endorsement of the angry Hanuman image suggests that the Sangh parivar is fully conscious of the power of ‘art’ and has a firm idea of what such art should be.

Sidharth Bhatia
Politics
The Arts
08/May/2018

In between mocking the Congress party for its various acts of omission and commission – never mind if he got his facts mixed up – and invoking the patriotism of dogs, Prime Minister Narendra Modi found time during his campaigning in Karnataka to single out a young artist to congratulate him.

Karan Acharya has created the popular image of the ‘angry Hanuman’ and Modi hailed him for his “magnificent art”. The prime minister criticised the Congress for “painting it (the image) with a communal angle”. “Unable to digest its success, the Congress tried miring it in a controversy. There is not an iota of democracy in the Congress members.” A few days later, he praised an ‘extremely talented artist’ Kshitij Bajpai, a little known cartoonist whose works are replete with frightening misogyny and brazen anti-Muslim messaging.

Art appreciation is subjective and it is possible that such images and cartoons appeal to Modi. But in his political career, Modi has not so far shown any interest in or propensity towards art. Not so his fellow Sanghis, whose idea of art criticism is to get violent towards the artist. Ironically, one work that really got them angry was a painting of Hanuman rescuing Sita by M.F. Husain. The celebrated artist had to face the wrath of Hindutva elements and had to finally leave India, the land of his birth, and become a citizen of another country in his 90s.

Then, in the year 2000, an exhibition at the National Gallery of Modern Art was abruptly shut down because the then NDA government did not like the work titled ‘An actor rehearsing the interior monologue of Icarus’, by Surendran Nair that showed the Ashoka pillar. The same year, Indian diplomats in Canada objected to an exhibition of contemporary Indian art in Toronto.

The BJP and the larger Sangh parivar are, therefore, not known to be art aficionados. So it does come as a surprise when no less than the prime minister praises a work as “magnificent art”.

The image in question, done in dark saffron and black, shows Hanuman with a furrowed brow, glowering eyes and a scowl. The monkey god has very different qualities in Hindu lore but the work projects ultra machismo that fits in well with the self-image of the Hindutva oriented male. Acharya says his Hanuman has “attitude not aggression”, is “powerful, not oppressive”. Those who are displaying it with pride may not necessarily think so.

Traditional images of Hanuman have shown him either at the feet of Ram and Sita, or tearing his chest to show their images within. In many paintings, he is shown flying, carrying a small hillock with the life saving sanjeevani booti, which, in mythology, was said to be a miracle cure. (No one has actually found this particular medicine and a massive, multi-crore project of the Uttarakhand government to locate it has so far failed.) Hanuman is a warrior in his own right, leading an army of his fellow simians, but rarely has he been displayed as anything but a perfect devotee of his Lord, Ram. Acharya’s rendition gives him an entirely different spin.

Modi has quickly understood the power of this drawing and the potential to utilise its propaganda value – for one thing it will fit in well with the campaign for the temple in Ayodhya. It is the kind of image that can be used and amplified across multiple platforms and could transmit just the message that the BJP today wants to, that it is not a party anyone should mess with. The Hindu is effete no more; he is angry and ready to take on anyone, violently if necessary.

As it is, the Hindutva organisations have traditionally distorted the image of Hanuman to further their own political agenda. In one recent instance, activists of the Bajrang Dal celebrating Hanuman Jayanti came out on the streets waving swords and shouting slogans such as ‘Jai Hanuman’ and ‘Hindustan humara hai’, a neat conflation of religion and nationalism. Whatever the artist may say, the image has been appropriated – not in a benign but an aggressive way.

But despite its obvious religio-political symbolism, Modi has chosen not to focus on that –  he has called it ‘art’. He is not connecting it with Ram or indeed Hindutva, but with artistic and creative freedom, criticising the Congress for its lack of ‘democracy’, presumably implying freedom of expression. With this, he has given his imprimatur on its artistic value. 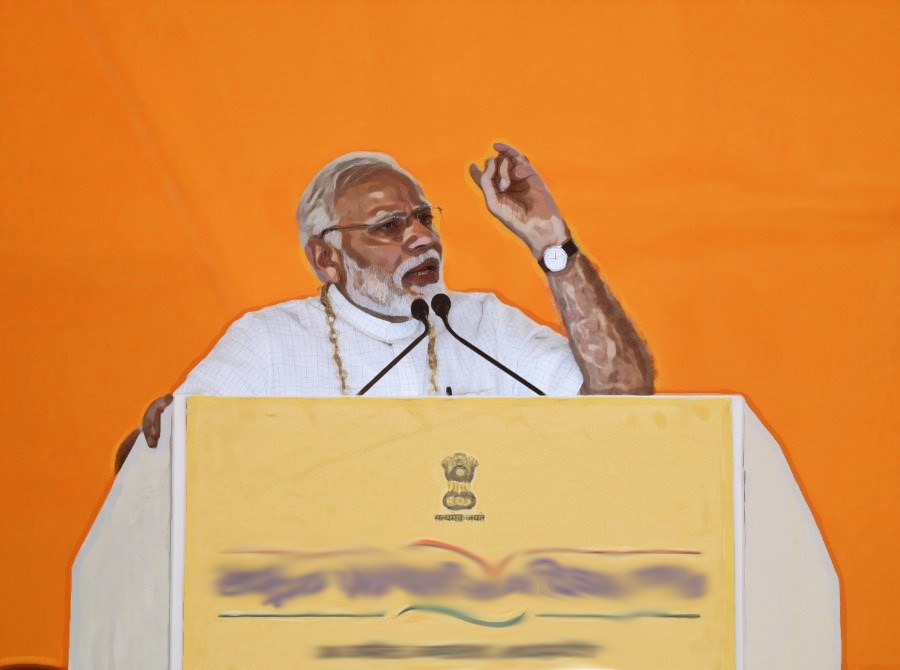 Does this mark a first step of the BJP towards hallmarking art? Will the party and its ideological mentors now take it upon themselves to brand what is ‘good’ art and what is not? And will it promote its favourite artists and try to undermine renegades who challenge established notions of Indianness?

At one level this sounds like a moot question – contemporary Indian artists have not shown any propensity towards questioning the burning issues of the day. There has hardly been a significant expression, leave alone protest, about rising intolerance. The artist community did not participate in the award wapsi campaign, and nor has there been any major exhibition that comments on the important questions of the day, such as communalism or attacks on minorities. It is as if Indian contemporary art is operating in a vacuum, cut off from social reality, happy to display in galleries abroad. If and when a prominent artist overtly makes an artistic statement on an issue such as rising, ugly majoritarianism, we will see how the militant elements of the parivar react.

The prime minister’s ringing endorsement suggests that the parivar is fully conscious of the power of ‘art’ and it has a firm idea of what such art should be. The angry Hanuman ticks off all the key boxes from the Sanghi point of view – not only is it hyper masculine and forceful in its representation, it is also modern. This is clearly graphic art, possibly done on the computer, in a stylistic way that would appeal to a younger demographic. They may not be attracted to the soft-focussed, kitschy, calendar representations of yore that can be seen in homes and shops all over India. No self-respecting young Hindutva warrior will want to stick a work of Raja Ravi Verma on his SUV; this looks technologically advanced enough to use with pride and arrogance.

The use of art for ideological reasons is hardly new. The Soviets were big on socialist realism that served and glorified the communist cause. The Nazis, and Adolf Hitler personally, celebrated the racial ideal, appropriating classical Greek and Roman forms. They romanticised not just the pastoral but also the heroic. The idea was to invoke a golden German age of the past, which fitted in well with Nazi ideology.

This also meant that modernists were seen as subversives – Hitler was personally against any form of modern art and it was banished from the authorised canon. In 1937, the Nazis held an exhibition called ‘Entartete Kunst’ (Degenerate Art) showcasing 650 pieces of modern art which were beyond the Nazi pale. This was to show what art was unacceptable and would be purged. Similarly, the Nazis eventually shut down the Bauhaus school that was developing a new design vocabulary which was simple and streamlined, moving away from the romanticised styling of the past, including in typefaces.

So far, the Hindutva elements have not spent any time on art, preferring to concentrate on history and mass media such as cinema; they have appointed their own favoured officials in key positions who can exercise control over what gets shown and what doesn’t. Art, maybe, is considered too esoteric and elitist. At the same time, Indian artists have given no one any reason to get worked up.

But that could soon change. With a pat on the back from the highest in the land to a young artist for his take on a religious figure, we can see the beginnings of what the establishment will like and what it may not. The disapproval may reveal itself one day. Soon we could have officially-approved art and our artists, safe in their cocoons, will have to make difficult choices.