Hours before the campaign for the general elections was scheduled to end, the prime minister said he had decided to address the press to "thank" the people and journalists. 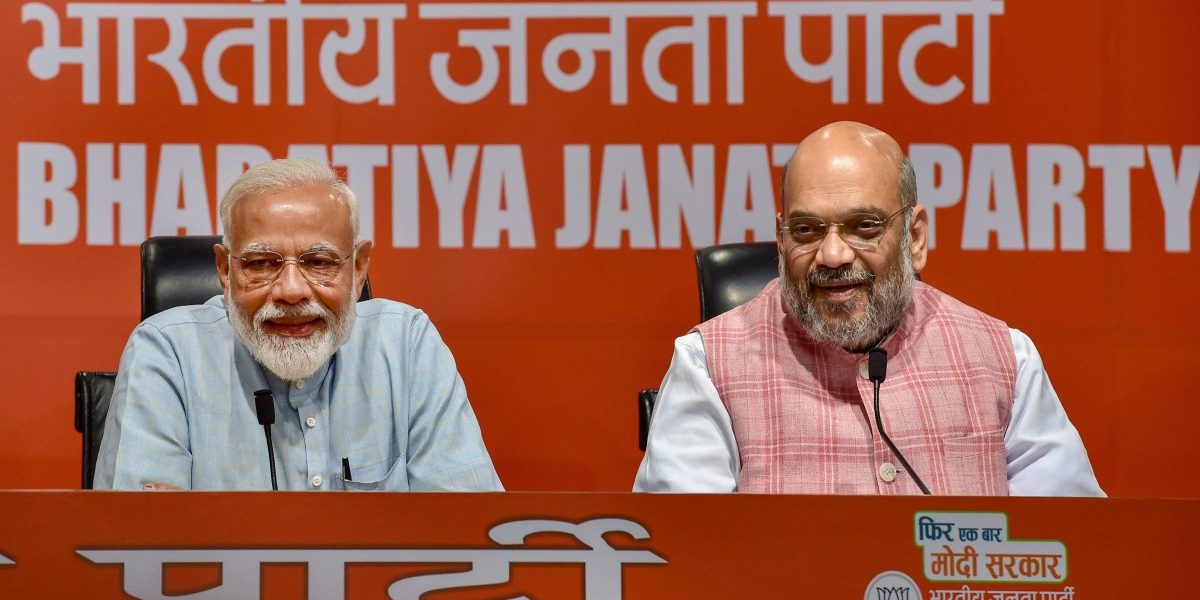 New Delhi: Narendra Modi was seen – and heard – at a press conference on Friday for the first time during his prime ministerial tenure on Friday but the event ended with his record of being the only incumbent to never answer questions from reporters fully intact.

In brief but rambling remarks, Modi said that he had come to thank the people of the country, and even journalists, for giving him “ashirwad” (blessings) and allowing him to work for the country over the past five years. But he said he would leave it to BJP president Amit Shah to answer any questions journalists had.

In his remarks, Modi termed the election campaign a success. “During the previous two elections, the IPL could not be held. When the government is strong, IPL, Ramzaan, Hanuman Jayanti and school exams can be conducted peacefully,” he said.

He claimed that the NDA would return to power for a second time, with a stronger mandate. “It will happen after a long time in the country, that a government will come to power with an absolute majority for the second consecutive time,” he said.

The prime minister said “honest governance” began on May 17, 2014 (exactly five years ago), a day after the results of the general election were announced that year. During these five years, his government was able to ensure last-mile delivery with a “new governance structure”.

Modi added that on May 17, 2014, there was a “huge casualty” because the “satta bazaar” had bet on the Congress in the elections and faced huge losses from the results which had been declared the previous day.

In fact, betting markets hugely favoured the BJP and Modi to come to power in that election more or less as predicted.

Also Read: Even Before May 23, There Are Lessons to Be Learnt from the 2019 Elections

Praising the strategy and planning of the BJP’s election campaign, Modi claimed that none of his election rallies or programmes were cancelled. In fact, in the aftermath of Cyclone Fani, a rally in West Bengal was cancelled and postponed to the next day.

Answering questions, Shah defended the party’s nomination of Pragya Thakur as a candidate for the Bhopal Lok Sabha seat, saying it was a “satyagraha” against the Congress. He claimed the Congress had floated the idea of “Saffron terror” to “malign” the Hindu religion. He disowned Thakur’s comment in which she called Mahatma Gandhi’s assassin, Nathuram Godse, a patriot and said the Modi government has worked hard to honour the beliefs and ideas of Mahatma Gandhi on cleanliness, national security and khadi. He said disciplinary action would be initiated against party leaders for their comments on Godse as per the procedures spelt out in the party’s constitution.

Shah also claimed that the BJP would win more than 300 seats in the elections.

After it was announced that Modi would be holding a press conference, Congress president Rahul Gandhi held a parallel press conference. He asked why the prime minister did not participate in a debate with him on the Rafale issue. “I had challenged you for a debate, tell the press why didn’t you debate?”

Gandhi alleged that only certain journalists were allowed to participate in the prime minister’s press conference.

Congress President Rahul Gandhi: Now that the Prime Minister is doing a live press conference, I want to ask him ‘why didn’t you debate with me on Rafale? I had challenged you for a debate, tell the press why didn’t you debate?’ pic.twitter.com/puM8n8zfNP

Gandhi said the Election Commission has been “biased in this elections”. He claimed that while the prime minister can “say whatever he wants”, the Congress wasn’t allowed to do so. “The election schedule was made for Modiji’s campaigning,” he said.

On the prospects of an opposition alliance, Gandhi said that after the “public will decide on May 23”, the Congress will work on the basis of the results.

Congratulations Modi Ji. Excellent Press Conference! Showing up is half the battle. Next time Mr Shah may even allow you to answer a couple of questions. Well done! ?

Modi’s failure to take any questions at a press conference that had been specially convened for him became the butt of jokes on social media.