For all its pleasing formulations and promises, the prime minister's fifth Independence Day performance turns out to be an ominous assertion of personal indispensability. 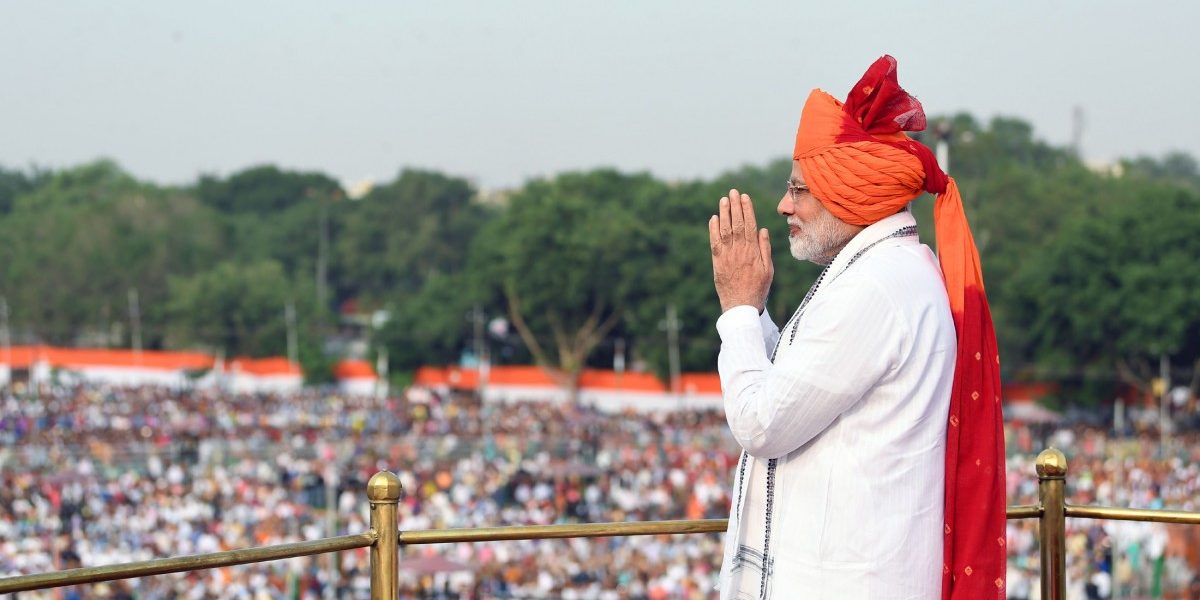 Narendra Modi greets people at the ramparts of Red Fort, on the occasion of 72nd Independence Day, in Delhi on August 15, 2018. Credit: PIB

The Red Fort offers the grandest pulpit in India. It is also reserved for only one person, the prime minister of the day. Once a year, on August 15, the pulpit offers the prime minister an opportunity to elevate himself as a national mascot, worthy of our respect and admiration; it becomes an occasion for the incumbent to showcase himself or herself as a national leader, thoughtful, wise, prudent and magnanimous.

For four years as prime minister, Narendra Modi has made reasonably good use of the pulpit, crafting for himself the veneer of a national steward. It has, arguably, been a struggle these last four years. The Narendra Modi who spoke from the Red Fort’s ramparts this morning for the last time was a man deeply conscious that both his credibility and respectability as a national leader were frayed; in the event, he made a sensible choice and avoided extreme partisanship. He avoided bitter malice – there were no ugly jumlas, no running down of national icons, no pointed name calling. In avoiding these, he may have just salvaged a bit of his endangered ‘decency quotient’.

But he still came off as a man desperate to position himself as a prime minister presiding over the most welfarist state India has known since independence; in his telling, he was a king who would provide health, power, water, sanitation, education, housing, skills, insurance, connectivity. For a man who began his prime ministerial quest with the slogan of “minimum government, maximum governance,” this morning’s roll-call of promises and proffered dreams was an amazing relapse into populism, once decried so vehemently by the very ideologues of the ‘New India’.

Yet, most revealing were the last ten minutes of his 90 minute-long oration in which listeners were served an extremely massive overdose of the Narendra Modi persona. No prime minister of India had ever before spelled out national greatness as a personal project, as did Modi in those last ten minutes. No prime minister before had so blatantly appropriated national nobility for himself and presented this appropriation as the necessary and sufficient condition for national glory and greatness. As long as Narendra Modi is presiding over the Indian state, we are set on course for a national renaissance. A clear and concise manifesto for megalomania. There was this endless invocation of “my country,” “my honest tax-payers,” “my jawans” etc. Chilling. The country has been served notice of the psychological longings lingering in the authoritarian closet.

Unsurprisingly, the prime minister could not help reiterate the by-now familiar theme of personal indispensability: he argued that whereas the “system” remains unchanged – the same constitution, same laws, same bureaucracy, same resources, same people as it was before 2014 – a fundamental difference has been felt by the masses because of the supposedly transformative leadership he has provided. This is familiar, so central to all incipient authoritarian rulers.

As a leader, Modi combines two essential traits – the salesman’s glib talk and the storytelling skills of the small-town katha-wachak. Competently and cogently, using selective facts and self-serving arguments, he presented a rosy picture of a stable and harmonious society and a vibrant economy, all on his watch. Unnamed “foreign” authorities and their certificates of good performance were flaunted to reassure the nation that the economy was on the mend; convenient comparisons were made with some undefined, undated “past” benchmarks to outline the sixth largest economy that is all set to shape and dominate the global economy for the next 30 years.

This line was clearly a determined effort to hold on to the “achhe din constituency”.  The good-news only talk was aimed at the doubtful constituency, which wants to be reassured that the government is in control of the situation – despite the daily dose of disconcerting dispatches from all over the country, be it the depressing news about widespread abuses at the shelter homes in UP, Bihar and Madhya Pradesh, or the precipitous fall in the rupee-dollar exchange rate, or the outbreak of anarchy and licensed lynching in different parts of the country. The country was sought to be goaded out of its gathering scepticism.

In particular, the prime minister went to considerable extent to talk up an unprecedented eruption of “imandari”; he presented this as an infectious growth of good citizenship, of lawful and compliant citizens, happy and eager to pay their taxes. Never mind the unrelenting insensitivity of the petty bureaucracy, notwithstanding the return of the extortionist ‘Inspector Raj’, the prime minister was in his own zone. He says the country is at peace with itself – and, so it must be.

The harassed and harried citizen is being made to disbelieve and disregard her own degrading encounters with the babus; one and all are sought to be persuaded to look at the larger picture: there is an honest, dedicated chowkidar at the helm, ensuring honesty and integrity. Understandably, there was no reference to the famous promise to bring back  the billions of dollars stashed away in tax havens abroad and distribute these among the people. Nor was any song sung in praise of demonetisation, the singlemost disastrous decision taken by any government in decades. Nor was there any daring assertion that the “achhe din” were here and now, or even round the corner.

It is possible to infer that as prime minister, Narendra Modi has managed to cut himself off from the realities of massive insecurity, staggering unemployment, unacceptable inequalities, the rise of debilitating mediocrity, a precarious economy and all that; it is possible to believe that the prime minister equates his own party’s electoral prosperity with the nation’s well-being. In fact, power often plays havoc with a ruler’s sense of reality.

It is also possible to suggest that the prime minister knows all about the ugliness and unfairness lurking around this complicated land, yet he remains viscerally enamoured by his rhetorical skills to talk India – and more than 1.2 billion Indians – into falling in line with his wishes and command. A tantalising project, a frightening prospect. Happy Independence Day.