The case was transferred to the CBI on May 16, after the Delhi high court said the police were diverting attention instead of carrying out a proper investigation. 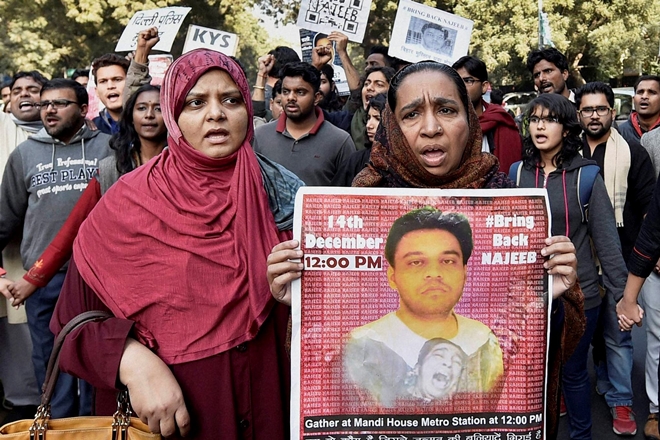 New Delhi: A CBI team today visited Jawaharlal Nehru University (JNU) to probe the disappearance of Najeeb Ahmed, a first-year MSc student who went missing from his hostel on October 16, 2016. The team is looking into allegations of a scuffle between Ahmed and ABVP students in JNU’s Mahi-Mandvi hostel and the circumstances that may have led to his disappearance.

They are likely to meet the suspects and people whose names have come up in the matter, sources said. Ahmed’s mother Fatima Nafees recently met CBI officers who are investigating the case.

Ahmed has now been missing for more than eight months. The case was handed over to the CBI on orders from the Delhi high court on May 16, after allegations that the Delhi police was not doing its job. The court said then that the police had been “beating around the bush and not in the bush”, as it has been sending people across the country and setting up special investigating teams, but the nine students suspected to be behind Ahmed’s disappearance were neither questioned no taken into custody.

The CBI registered an FIR in the case on June 2.

Nafees has been doing whatever she can to try and quicken the pace of the investigation – from holding protests to petitioning the Delhi high court and meeting high-profile politicians. Ahmed’s sister has also been active in trying to make the authorities more accountable.

Ahmed disappeared the day after an alleged altercation in his hostel, where students who belong to the ABVP (the youth wing of the BJP) are said to have attacked him after he slapped one of them who came to campaign in his room. What exactly happened remains unclear – different versions have been provided by eyewitnesses, the accused, others who say they were also beaten up and the hostel warden.

In March, the Times of India carried a fake news story about Ahmed, saying that the police had found evidence on his laptop that suggested he had been doing research on ISIS and was an ISIS sympathiser. The newspaper was widely criticised for this story, with the Delhi high court saying that there was no such evidence at all and that the police was perhaps planting such stories to divert attention away from their lack of progress.

The university administration has also been criticised for the way the handled the matter right after Ahmed’s disappearance. In a statement that they had released, Ahmed was called “the accused”, leading to angry reactions from both the students’ and teachers’ associations.