Naga Peace Accord Remains Hazy and Full of Pitfalls

The details of what exactly is the agreement between Naga rebels and the Indian government remain unclear. Meanwhile, rebel groups are giving their own spin to it 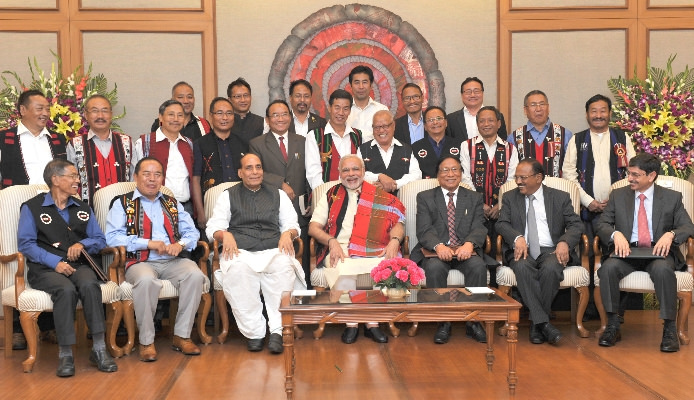 Less than three weeks after the Government of India and the rebel Nationalist Socialist Council of Nagaland (NSCN)-IM group claimed to have signed a ‘historic agreement’ to end the decades-old Naga uprising, the stage seems set for major discord in the region.

This is mainly over the disconcerting silence of the two sides about the possible shape of the final accord. To add to the all-round confusion, doubts and apprehension, is NSCN-IM general secretary Thuingaleng Muivah’s statement soon after he arrived at the outfit’s headquarters near Dimapur, in Nagaland, that his group has not given up on its demand either for ‘sovereignty’ or one on integration of the Naga inhabited areas around Nagaland, meaning areas in Manipur, Assam and Arunachal Pradesh.

The question now is–what is going on? Muivah’s claim, his first since the August 3 ‘agreement’ in New Delhi in the presence of Prime Minister Narendra Modi, that their idea of integration of Naga inhabited areas in the North-east is very much alive was seconded by another senior NSCN-IM leader V. S. Atem. In fact, Atem, the outfit’s ‘special emissary’, went a step further to say the Nagas have the ‘right’ to live together with their brethren outside of the state of Nagaland. The NSCN-IM appears to be taking advantage of the Prime Minister’s liberal tone in using words like ‘Nagas’ and ‘Indians’ during his address after the August 3 ‘agreement’ signing. Perhaps, the NSCN-IM has come to think that New Delhi has recognized the Nagas as a separate or independent entity, parallel to the Indian entity. One cannot say for sure unless the NSCN-IM clarifies on their idea of a ‘shared sovereignty’.

If the talk or idea of the so-called ‘shared sovereignty’ is the key subject of confusion, there are other contentious points as well. For example, the Modi Government’s interlocutor on the Naga peace talks, R. N. Ravi, who is the Chairman of the Joint Intelligence Committee, has said he has had talks with the All Manipur United Clubs Organisation (Amuco) before signing the ‘framework agreement’ with the NSCN-IM. The Amuco is a conglomeration of Meitei civil society groups in Manipur and Ravi’s claim of having held talks with it gives an impression that the organization has been consulted on the shape of the final Naga deal and that it was satisfied.

Now, the Amuco has contested Ravi’s claim and said there was no meeting at all although it had received an informal invitation. These kinds of claims and counter-claims do not suit anybody’s interest particularly after the Government has declared that an ‘agreement’ has been clinched.

Again, the very fact that the Union Ministry of Home Affairs has granted ‘permission’ to some Naga civil society leaders to visit Myanmar on their own to try and convince NSCN-K leader S.S. Khaplang to re-enter the peace process only goes to show that New Delhi seems to have realized the obvious—that a permanent solution to the Naga problem cannot be reached by signing a deal with only the NSCN-IM. This also suggests that someone somewhere in the Union Government had goofed up in letting the NSCN-K drift apart and abrogate their 14-year-long truce.

That the folly has been detected and realized is clear because the Centre has given the go ahead in attempts to try and get the NSCN-K back even after the outfit launched the biggest attack on the Army in two decades, killing 18 soldiers in Manipur in June. Significantly, Khaplang has refused to personally meet the Naga Hoho-led delegation in Myanmar and has instead deputed the outfit’s vice-chairman Khango Konyak and senior military commander Nikki Sumi to talk to the Naga team. If reports are to be believed, Nikki Sumi was the mastermind behind the June 4 ambush on the Army in Chandel district. And if the meeting takes place, the Hoho-led team will talk to Sumi!

There is another dimension to the story. Ravi, the interlocutor, has also stated that he has met Manipur Chief Minister Ibobi Singh around 12 times before the August 3 ‘agreement.’ The onus is now on Ibobi Singh to clarify as to what transpired in these meetings and whether New Delhi has made it clear to him that Manipur’s territorial integrity will not be disturbed or altered once the final accord with the NSCN-IM is reached. Now, the Meitei groups have come together under the banner of what is called the Joint Committee Inner Line Permit (JCILP), pushing for the inner line regulations to be extended to Manipur. The Meiteis feel there are too many intruders into the heavily populated Imphal Valley and a regulation is needed to prevent ‘outsiders’ from buying land and conducting trade and business easily. New Delhi appears to be opposed to this idea but whether it eventually decides to concede to the Meitei demand as a quid pro quo to the final Naga deal remains to be seen.

The scenario is thus hazy, stakeholders are apprehensive, the silence is ominous, and the next move of Naga insurgent groups opposed to the NSCN-IM, like the NSCN-K, are keenly watched. The beginning of the end to the protracted Naga problem is yet to be reached. This is because New Delhi has not bothered to clarify NSCN-IM’s claim that the Government of India, through the ‘framework agreement’, has come to recognise the ‘unique history of the Nagas’. What exactly is this ‘unique history’?

(Wasbir Hussain, a political commentator, is Executive Director of the Centre for Development and Peace Studies, Guwahati)