Murli Manohar Joshi Told That Modi, Shah Do Not Want Him to Contest Lok Sabha Polls

The BJP founder and veteran won the Kanpur seat in 2014 with a record margin but his role as head of the Estimates Committee of parliament has irked the Modi-Shah duo. New Delhi: Murli Manohar Joshi, a founder of the Bharatiya Janata Party and sitting member of parliament from Kanpur, has been told that Prime Minister Narendra Modi and BJP president Amit Shah do not want him to stand for election again.

Their blunt message was conveyed to Joshi on Monday by Ram Lal, general secretary (organisation) of the party.

Joshi, who was all set to contest from Kanpur again, had earlier been asked by Ram Lal to save the party from embarrassment and make the announcement himself.

Two days on, Modi and Shah have virtually pulled the rug out from Joshi’s feet. No indication was earlier given by the duo that he would be denied the party’s ticket.

According to sources familiar with the interaction, Joshi said, “What are they scared of? Why can’t they face me?”

Also read: Murli Manohar Joshi on Why Republics Get Destroyed

In the 2014 election, Joshi had vacated his Varanasi seat for Modi and then won Kanpur by a record margin, securing 57% of the votes.

The BJP has been telling the media that all the senior leaders who had been consigned to the Margdarshak Mandal after the 2014 election have voluntarily decided not to contest for the Lok Sabha this time, including L.K. Advani and Shanta Kumar, who also had similar visits from Ram Lal.

While Advani had himself declined to contest, sources say he was extremely hurt by the humiliation meted out to him. Both Joshi and Advani expected that Shah would at least have had the courtesy of telling them himself.

Joshi, sources say, is now mulling his next move. Unlike Advani, the former physics professor is a strong favourite of the RSS, and Sangh chief Mohan Bhagwat is learnt to be extremely upset by the Modi-Shah move.

Joshi, who is the chairman of the Estimates Committee of parliament, has repeatedly embarrassed the Modi government by refusing to pull his punches. His reports on defence preparedness, the Ganga clean up and  banking NPAs have left the Modi government red faced. Joshi also brought the “Rajan list” of wilful fraudulent defaulters to light.

The denial of the Kanpur ticket is perhaps punishment for Joshi’s scathing reports. A senior BJP leader said, “This is no way to treat our founders. They are literally being thrown out. Modi and Shah have set a dangerous precedent and they will face the same treatment later”.

Perhaps seeing the writing on the wall, several senior BJP leaders have already announced that they are not contesting the election, including Sushma Swaraj and Uma Bharti.

Apparently the RSS had warned Shah that Joshi would not keep quiet and his ticket being cut would send a wrong message to the upper castes, particularly Brahmins, in the electorally crucial Uttar Pradesh. But Modi and Shah were adamant. This is not the last word from Joshi. Watch this space. 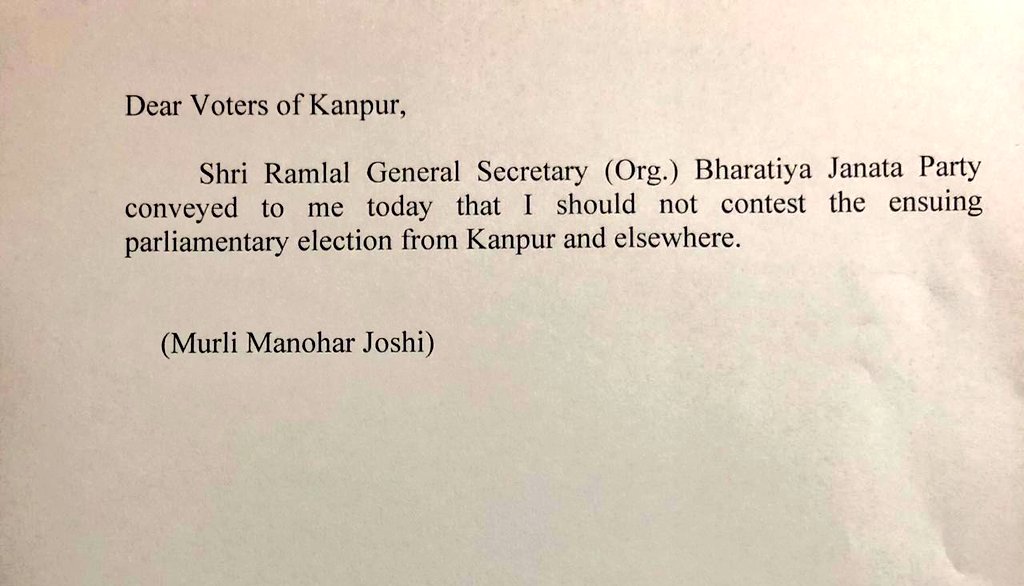