After their houses were razed to the ground, families living along the Tansa water pipeline were moved to a heavily industralised area with poor transport connectivity. This has cost them both their health and livelihood. 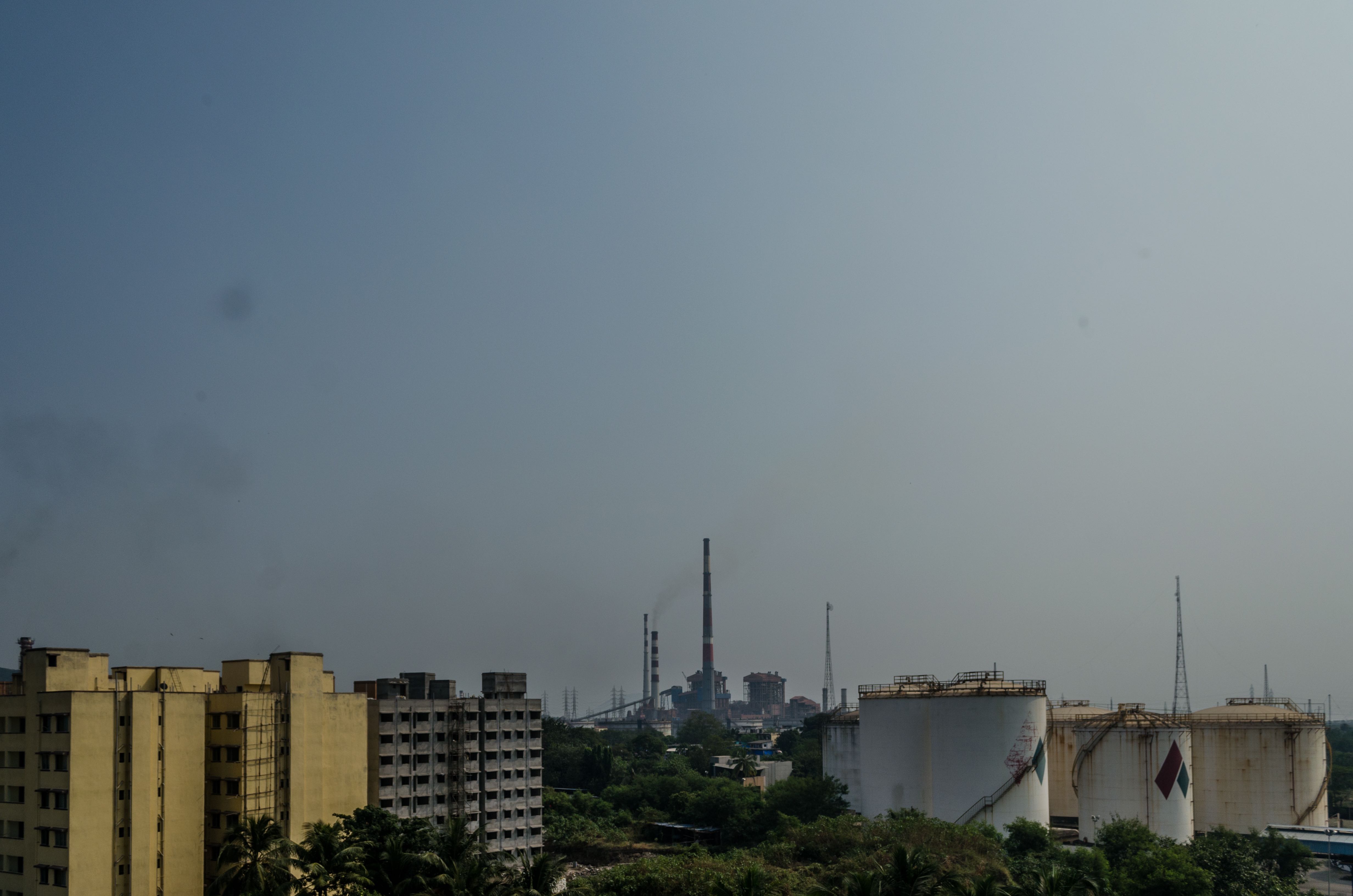 The MMRDA building complex with a storage unit of Sealord Enterprises near it. Credit: Sayan Bhattacharjee

Mumbai: On May 13, nearly 1,000 houses near the Tansa water pipeline in Ghatkopar and Vidyavihar in Mumbai were razed to the ground by the Brihanmumbai Municipal Corporation (BMC). The demolition was carried out in accordance with a Bombay high court 2009 order to remove settlements within ten metres of either side of the pipeline. However, the residents of the demolished shanties are not homeless today. The state can claim that they have been ‘rehabilitated’, as they have been moved to Mumbai Metropolitan Regional Development Authority (MMRDA) buildings in Mahul, where they have been living since June 12. But even the flimsiest definition of rehabilitation cannot be optimistically applied to the changes that these individuals and families have experienced in the last six months.

Living in a gas chamber

Mahul is a heavily-industrialised area with Hindustan Petroleum and Bharat Petroleum refineries operating there, along with other industries like Sea Lord Containers, Aegis Logistics Ltd, Tata Power and Rashtriya Chemical and Fertilizers. The air in Mahul is thick and pungent with emissions from these industries. Ever since their arrival, the erstwhile residents of Ghatkopar and Vidyavihar have been plagued by illnesses. They are rapidly losing hair. The corrosive environment is acting on their skin, the effects of which can be seen in the form of pimple-like growths or dark patches. They complain of stinging in their eyes and burning in their throats. 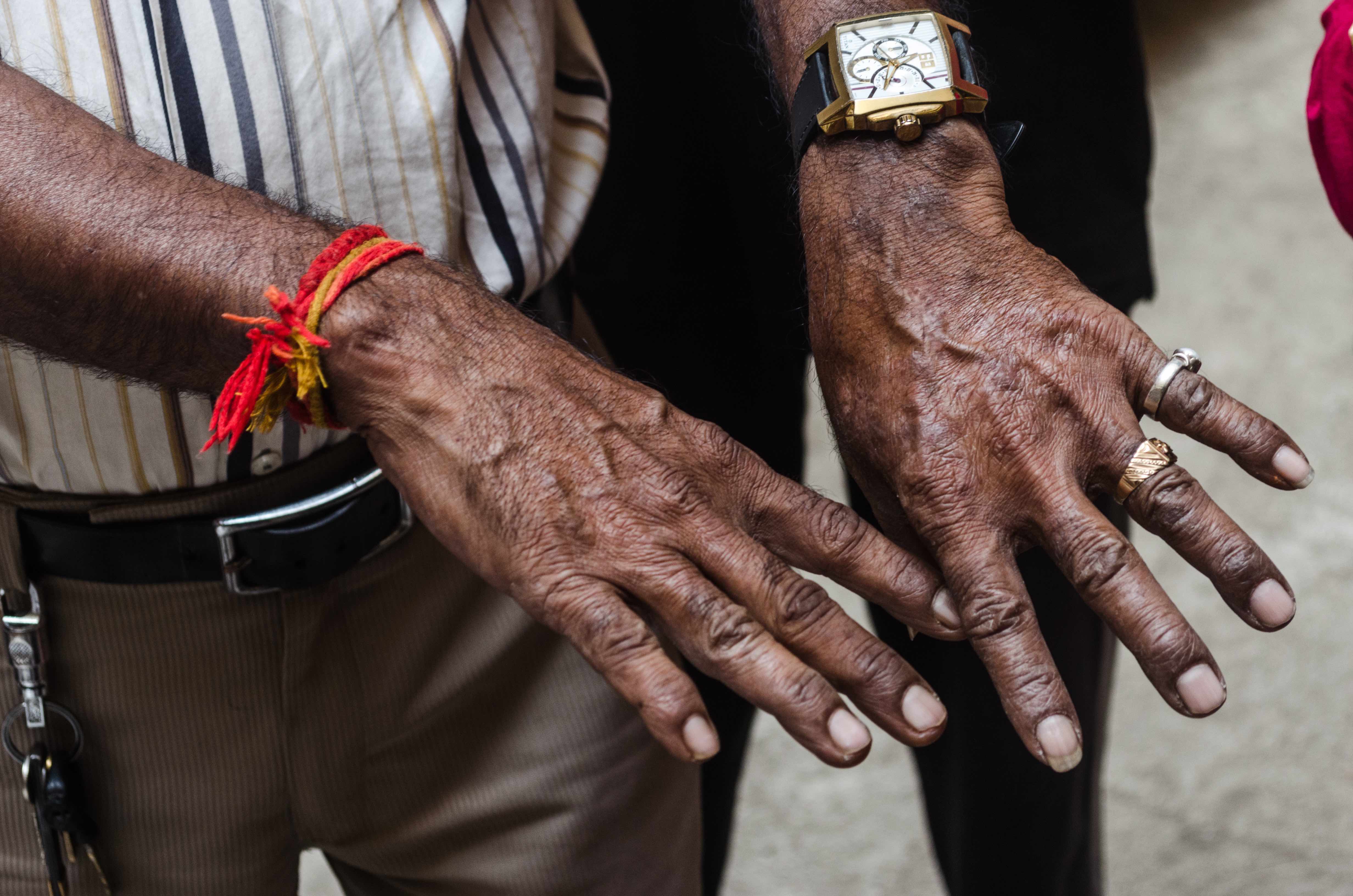 Dark patches on the skin of a resident’s hands. Credit: Sayan Bhattacharjee

Anita Dhole, who used to live in Rajawadi and is now residing in the MMRDA building complex, has been collecting and neatly arranging in files the medical reports of those who have fallen ill since the move. Leafing through the reports shows the frequency with which residents have been affected by respiratory problems, skin rashes, heart problems and increase in blood pressure. Dhole herself has suffered a respiratory tract infection and skin rashes, while her mother’s blood pressure has risen severely.

Adding to the deteriorating health of the residents is the poor quality of water supplied in the buildings. At times, the water even has a layer of oil on it. Several residents have suffered stomach infections from consuming the contaminated water. Illness hangs heavy in the air they breathe and the water they drink, and a statement repeated by numerous frustrated residents was: “Woh hume yahaan rehne ke liye nahi bheje hai, yahaan marne ke liye bheje hai (They have not sent us here to live but to die).” 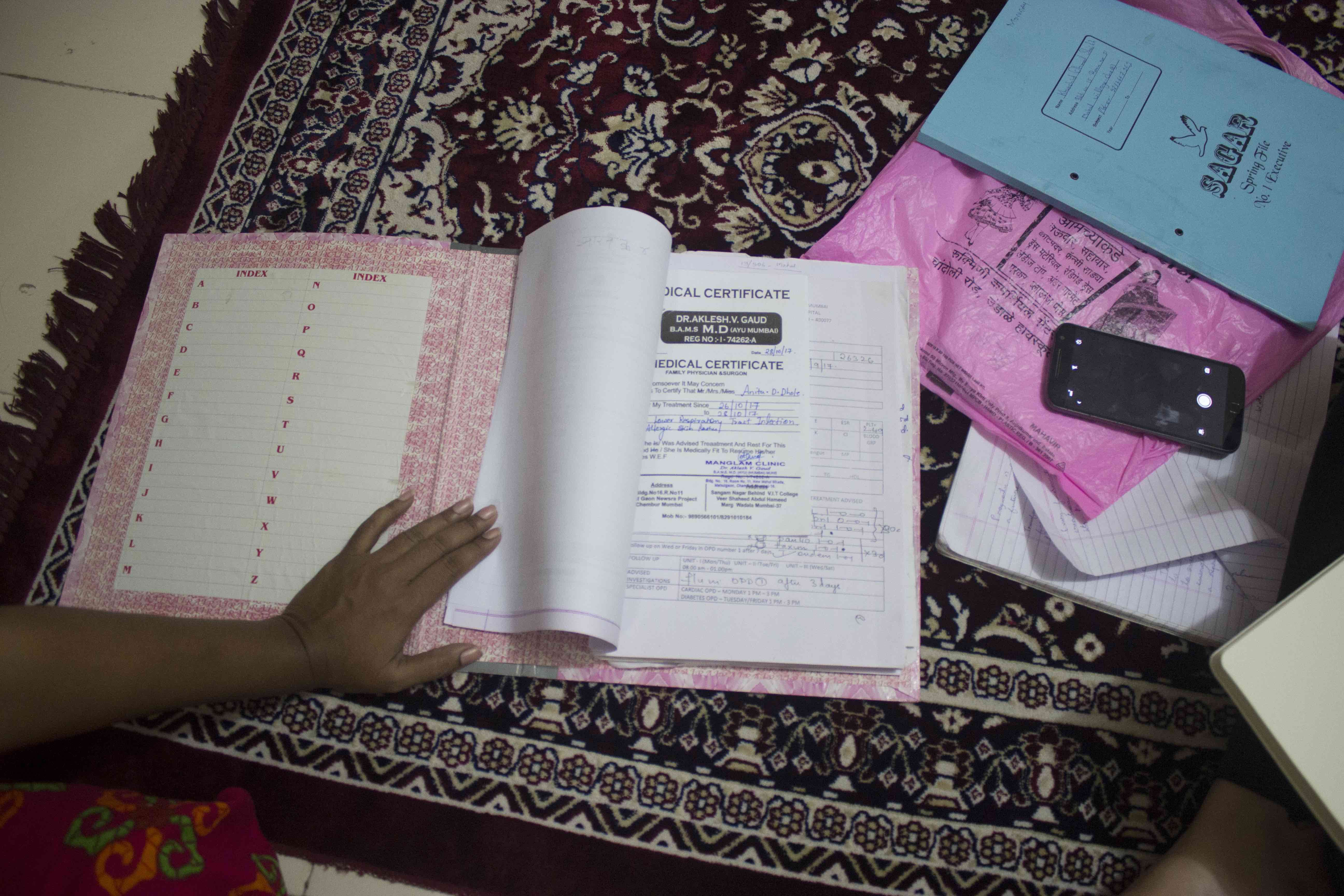 This area has no municipal hospital and the residents travel to Rajawadi Hospital in Ghatkopar, which is 11 km away. This brings to the fore another major issue of the area – lack of connectivity through the city’s train network. The nearest convenient stations are Chembur and Kurla – which are eight and 12 km away, respectively. A one-way trip to the Rajawadi Hospital is a Rs 140 rickshaw journey. This lack of connectivity has proven to be crippling in an area which has little to offer in the way of employment and education to the relocated people.

‘Rehabilitating’ the residents 12 km away from their original settlement to a place with poor transport connectivity has made them lose access to their earlier jobs. Dhole says of the women residents, “Most of them used to perform domestic labour like cleaning and cooking in the nearby middle and upper-middle class homes of Ghatkopar. Now most of them are unemployed because there aren’t such residential areas in the vicinity. They can’t even try to venture further in search of similar work due to high transport costs.”

Most of the residents are currently out of work. 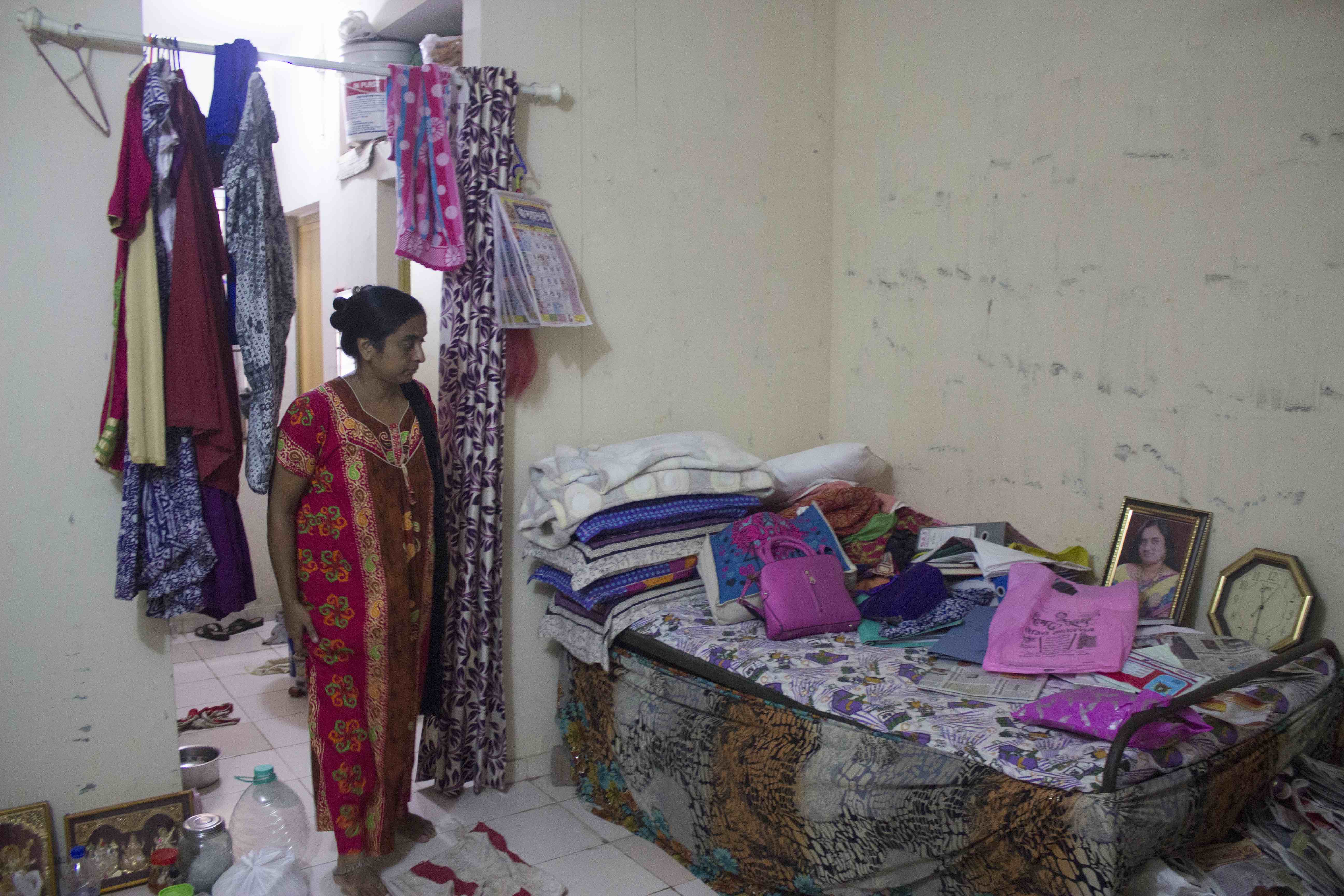 Anita Dhole in her allotted room in the MMRDA complex which she has refused to accept as a home and settle into. Credit: Prthvir Solanki

Jaishree Kailashparke has five children. The eldest daughter, 17 years old, is currently not studying. She was unable to get admission to college due to a delay in application, which was because of the disruption caused by the demolition and relocation. The second daughter, 16, goes to college in Vikhroli, the commute to which costs Rs 200 per day. On days when her family is running short of money, she does not go to college. The third daughter, 14, has been admitted to a private school in Mahul as there are no municipal schools in the area. The family had to pay Rs 1,000 for her admission and continues to pay Rs 900 every month to educate her. Given that she was formerly receiving free education at the municipal school in Rajawadi, the financial burden on the family has multiplied enormously. The two youngest children were sent back to their native village after the relocation as the parents found themselves unable to sustain the entire family with the additional costs and the loss of Kailashparke’s income as a domestic worker.

Many other children continue to study in schools in Ghatkopar due to the lack of accessible schools in the area. Mothers accompany their young children to school on buses and wait nearby until its time to take them back home, as they lack the money to commute to and fro multiple times. The additional cost of commuting means that they have no other option but to miss school often, sometimes for days on end.

These are not minor details of their lives. By transplanting them here, the state has essentially cut 5,000 people off from employment, education and a basic standard of health. And more families are trickling into the 72 buildings of the MMRDA complex every day as the demolition drive continues in different areas along the Tansa pipeline.

It’s interesting that in 2013, ten buildings of this complex were allotted to police personnel to increase the security of this industrial area, which is a high-security zone vulnerable to terror attacks. However, they never moved in and the current residents argue that the personnel refused to live here due to the low standard of living. Rekha Gadge, a fiery resident, exclaims: “If the government thinks that this is an acceptable place for us to live in, I would like to see some of its high-level personnel also living here. If they’ll be willing to live here, all our complaints will be proven false and only then we shall shut up.”

Is merely moving people to a room with four walls and a roof rehabilitation? Bilal Khan, the convener of Ghar Bachao Ghar Banao Andolan, says, “Rehabilitation is supposed to encompass the restoration of livelihood and education opportunities. It is not merely displacing people without taking into consideration any basic amenities. This is technically relocation. I wouldn’t even call this relocation, this is dumping.”

According to Khan, this is a stark case of how the existing idea and implementation of slum rehabilitation is completely flawed. “People are here in this city to earn a livelihood. They’re not here to squat in a house. The end of rehabilitation can’t be just to provide a house and then wash your hands off the matter.”

In this case, the house is poisonous. 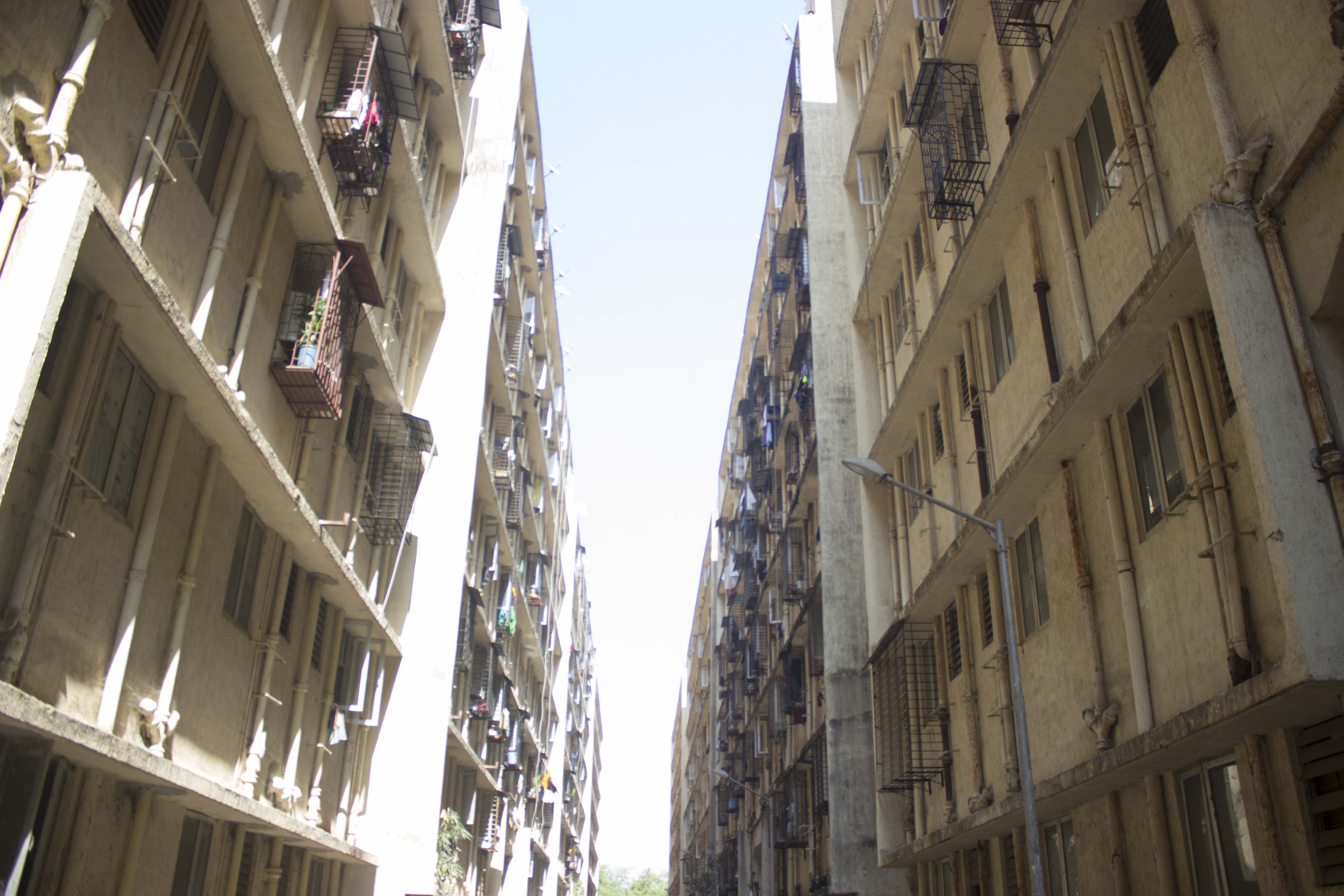 The buildings of the complex. Credit: Prthvir Solanki

The Right to Fair Compensation and Transparency in Land Acquisition, Rehabilitation and Resettlement Act, 2013, has laid down a framework for the rehabilitation of people displaced by land acquisition for state projects which is sensitive to the need to deeply take into consideration the livelihoods and access to public amenities of the displaced people. It should not be too much for the erstwhile residents of Tansa pipeline area to expect the same basic principles of rehabilitation to inform the state’s supposed rehabilitation efforts in this context as well.

It is not the case that the government was not aware of the issues of the Mahul building complex and the unwillingness of slum-dwellers to move there. In fact, on December 28, 2016, a major function was held in Ghatkopar attended by government functionaries including chief minister Devendra Fadnavis and Maharashtra housing minister Prakash Mehta – who is also the MLA from Ghatkopar East. A great exhibition was made of allotting and distributing the keys of houses in nearby Vidyavihar West to 400 families of Rajawadi and promises were made to similarly rehabilitate the rest of the residents close by. This was prior to the BMC elections which were held in February 2017. The resettled people also have older videos of Mehta addressing them and telling them that they will not be shifted to Mahul.

Even while their houses were being demolished, the residents believed that they were not going to be shifted to Mahul but were going to be rehabilitated nearby. Though they have been residing in the Mahul complex for the last six months, they refuse to accept it as their home and demand better for themselves. They are currently gathering their resources and preparing to go to court against the unlivable conditions that the state has imposed upon them and the political manipulation that they claim they have been subjected to.