In Chicago, Mohan Bhagwat Chose to Ignore the Enemy Within Hindu Society

By not referring to the internal causes of disunity in Hindu society and laying the blame solely on political adversaries and non-Hindu communities, the RSS chief remained trapped in rhetoric which makes him unrecognisable from other leaders of affiliates of the Sangh. 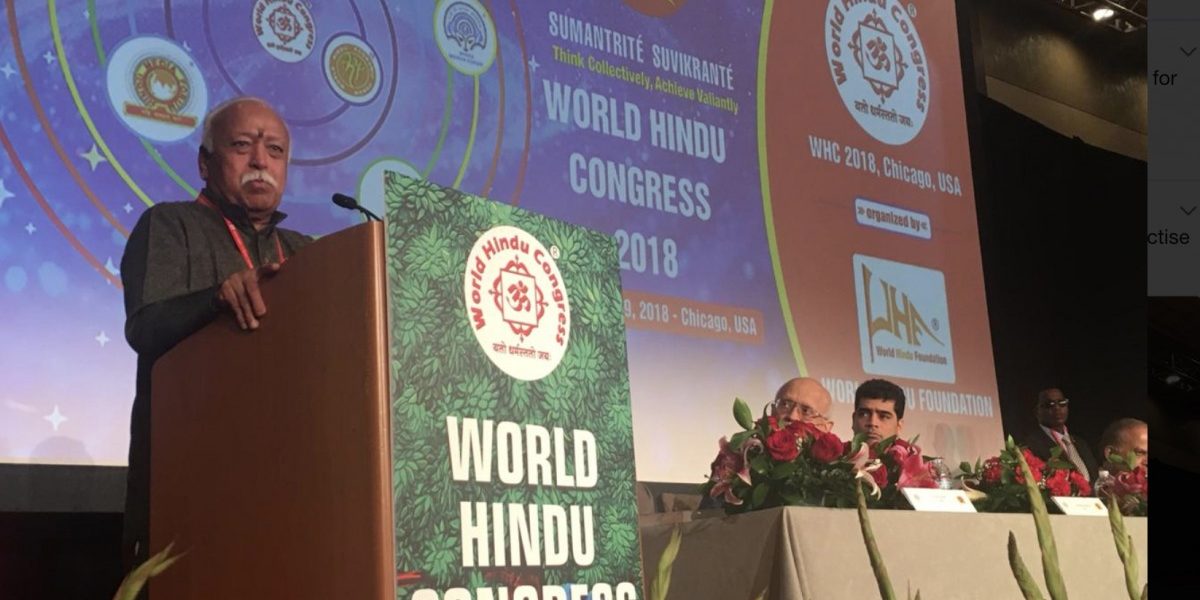 Rashtriya Swayamsevak Sangh sarsanghchalak Mohan Bhagwat’s speech at the World Hindu Conference has grabbed headlines and drawn criticism for his use of rank bad allegory. His metaphorical statement that although the Hindu is akin to a lion (sher), he can still be devoured by a pack of “wild dogs” because the king of the jungle does not believe in being in a group, cannot but be considered politically distasteful. This is primarily because the leaders of the Sangh, more than any political grouping in the country, is known to speak suggestively using multi-layered parables.

Because the lion in this case is not just ‘Hindu society’ but can also denote other institutions, individuals and organisations, criticism of Bhagwat’s assertion is understandable and justified. The example that the RSS chief sought used to stress the political necessity of forging an all-encompassing Hindu unity is a throwback to the distasteful ‘puppy’ statement Prime Minister Narendra Modi made in July 2013. At that time, his statement shockingly alluded to victims of the Gujarat pogrom of 2002 as hapless puppies, and now Bhagwat used the metaphor of wild dogs to depict forces inimical to Hindu society, or even any leader who he thinks is fighting against Hindu interests. In either case, the use of such intemperate language demonstrates intention to debase one’s adversaries and is against the ethics of a parliamentary democracy, where name-calling lowers the bar of public discourse.

In his speech, Bhagwat repeated nothing beyond homilies while using politically inappropriate similes. Throughout the speech he made sweeping claims, such as saying that Hindus had no intention to dominate others. Despite this, he claimed, there are visible Hindu influences in territories ranging from Mexico to Siberia and cherished by local people. The RSS chief reiterated the oft-repeated claim that Hinduism holds the key to the ultimate truth because its values are “universal” and tell us “everything about everybody – individual, society and environment”. Hinduism, in Bhagwat’s presentation, is flawless. He bemoaned the lack of unity and singled it out as the cause behind the failure to establish Hindu hegemony.

Bhagwat is the doctor who sees the symptoms but chooses to ignore the malady. The cure he offered, if successful, will lead to only superficial change. Bhagwat put the RSS’s long-term strategy at bay for the moment.

Some months after he assumed the sarsanghchalak’s office, Madhukar Dattatraya Deoras, popularly called Balasaheb Deoras, delivered a speech in Poona in May 1974 which is considered a watershed enunciation of ‘challenges’ before Hindu society and consequently the Sangh. Consciously, Deoras chose ‘Social Equality and Hindu Consciousness’ as his subject because he wished to convey to the RSS cadre the change in direction he wished to effect from the line pursued by his predecessor, M.S. Golwalkar. Deoras’s speech was the first instance of public recognition from the top echelons of the RSS that “social inequality amongst us has been a reason for our downfall. Fissiparous tendencies like caste and sub-caste rivalries and untouchability have all been the manifestation of this social inequality.”

Deoras further advised supporters that “while cherishing this pride (in heritage) it would not do to think that all that is old is gold… Just because something is old, it need not necessarily be good or eternal or gospel truth.” Deoras was certain that caste division was the primary hurdle in way of Hindu consolidation, but his radical thesis had few takers despite the principle of ‘ek chalak anuvartitva (follow one leader)’ being the RSS credo. Frustration stemming from the failure to cast away the Brahminical frame of mind, which had a stranglehold on the minds of the leaders and cadre, may have propelled Deoras to eventually propound the theory of collective leadership or sah chalak anuvartitva.

By not referring to the internal causes of disunity in Hindu society and laying the blame solely on political adversaries and non-Hindu communities, Bhagwat remained trapped in rhetoric which makes him unrecognisable from other leaders of affiliates of the Sangh, who are either active in politics or engaged with other sectoral affiliates, be it on labour issues or religious matters. A sarsanghchalak’s speech, even if critics of the organisation would have reasons to disagree with its contents and formulations, is expected to be more substantive than the usual web of clichés which those in the political domain normally weave.

These days, the latest DNA evidence is making scientists around the world confront the likelihood that, around 2,000-1,500 BC, South Asian hunter-gatherers (related to the Andaman islanders of today), pastoralists from the Eurasian Steppe and people from the Bactria-Margiana Archaeological Complex (area north of modern Iran) combined to form the Indian population. The last group used to be identified as ‘Aryans’. This is believed to have happened around the time when the Indus Valley civilisation was on the decline. Despite such scientific advances in understanding the past, Bhagwat repeated a hollow claim to demonstrate superiority over other civilisations and nations: Hindus went from this land and taught everyone else almost everything that requires knowledge and learning.

Making tall claims did not do service to the office he holds, and once again opened the Sangh parivar to scorn and mockery from almost every respectable quarter. Bhagwat’s bombastic claim echoed preposterous statements made previously by Prime Minister Narendra Modi and his ministers – on genetic engineering, reproductive technology, plastic surgery and so on existing in ancient India, besides of course claims like Darwin’s theory being scientifically wrong, cows exhaling oxygen and squirrels building the Ram Setu.

Yet, Bhagwat averred that when people ask him if he was anti-modern, he says that he is pro-religion. Unscientific claims were passed off routinely as religiosity and the charge of orthodoxy was not accepted, like always. Not only was Bhagwat consumed by self-importance, but also depicted Hindu society and culture as flawless, requiring no correction. He paraphrased Gopal Krishna Gokhale, claiming that what Americans would think 20 years from now, Hindus are thinking today.

He argued all the issues of concern were the result of opponents. Despite this, Hindus remained magnanimous, he maintained. Bhagwat claimed Hindu society “does not even kill pests” because they “recognise even the rights of pests to live”. The issue here was not the claim that critics were tolerated, but the label he gave them: pests.

But the Hindu in Bhagwat’s construct is not meekness personified. He claimed the position of Hindus is just like that of the Pandavas in the Mahabharata, a virtuous lot encircled by a web of immorality. He claimed Hindus are essentially peace-loving people, but this does not mean that they allow others to harm them. “We must have all the instruments, all the apparatuses, all the data etc, etc. to control them,” leaving it open to interpretation what these mechanisms of control are – weapons of mass destruction or something else.

Bhagwat is perforce faced with a situation that none of his predecessors had to deal with: the access to state power. Although the government headed by Atal Bihari Vajpayee was the first time the RSS could claim that the organisation had an “apni sarkar“, strained relations between the prime minister and the then sarsanghchalak, K.S. Sudarshan, did not allow for harmonious relations. This time it is different, and the RSS has almost been coopted into the state, at the cost of several principles that the Sangh has traditionally been committed to.

With lines between the Sangh and sarkar blurred like never before, the RSS leadership runs the risk of questions being asked in the event of a political setback for the BJP. Bhagwat has failed to insulate the RSS from the political roller-coaster, and for this eyebrows are occasionally raised within, although it has not yet been openly spoken of.

Bhagwat’s speech provided evidence that he is aware of the balance of power shifting somewhat within the Sangh parivar, and the primacy of the RSS not being as emphatic as before. The BJP’s emergence as a political force with the capacity to influence, if not dictate, the thinking and action of affiliates and even the high command, is a reality and Bhagwat sought to restore the sarsanghchalak’s position vis-à-vis the prime minister.

He drew a parallel with the Mahabharata once again for this, and spoke of the harmonious relationship between Krishna and Yudhishthira. It was not lost on anyone who he was referring to when he talked of the need to restrain one’s ego and “adjust opinions” when working in a team. Bhagwat drew attention more than once to the central theme of the World Hindu Congress: ‘Sumantrite Suvikrante‘ or ‘Think Collectively, Achieve Valiantly’. It was indeed a desperate plea when he stated that success is ensured only with a consensual approach, because “no one can secure truth single-handedly”.

Sadly, in his entire presentation at Chicago, Bhagwat did not invoke the much reiterated part of the Swami Vivekananda’s speech, the 125th anniversary of which was being commemorated with such flourish. The seer affirmed then:

“Sectarianism, bigotry, and its horrible descendant, fanaticism, have long possessed this beautiful earth. They have filled the earth with violence, drenched it often and often with human blood, destroyed civilisation and sent whole nations to despair.”

Call it a limitation or a wilful decision, Bhagwat decided not to talk of the ogre inside Hindu society, recognised by Deoras, and instead focused only on the external threat. Possibly, he too sees every issue from the prism of immediate political necessity.