Modi's Land Bill U-Turn is Because of Political Expediency

The fear of losing the Bihar elections is such that the government has dropped one of its key pieces of legislation. But will this impress the voters? 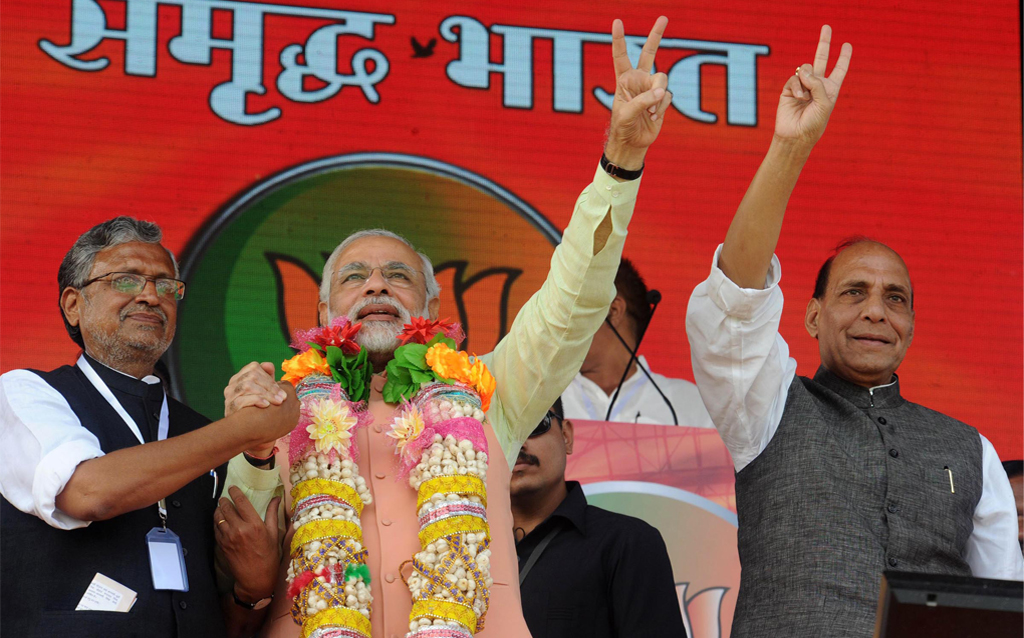 Is Prime Minister Narendra Modi going through an existential crisis? What else would explain the National Democratic Alliance coming around to accepting, in toto, the land law passed under the UPA regime in 2013, and then making a bizarre claim that this was being done in the interest of the farmers! Of course, this surreal U-turn by Narendra Modi has to be read entirely in the context of the upcoming Bihar elections, which the NDA must win at all costs to retain future legitimacy. For, political legitimacy—in spite of a hefty 282 seats in the Lok Sabha—has a way of eroding rapidly, which even the practitioners of deep politics are unable to fathom. Did anyone anticipate the kind of political mobilisation a 22-year-old Patel community leader managed in the backyard of a “development messiah”?

In a first, Narendra Modi on Sunday decided to overtly talk about politics in his radio program ‘Mann Ki Baat’, announcing that the land ordinance, which the BJP had steadfastly claimed was both pro-industry and pro-farmer, is to be withdrawn.  How will the BJP explain this politically? Saying the ordinance is pro-farmer and its withdrawal is also pro farmer doesn’t seem to add up! Narendra Modi will make a huge mistake if he thinks he can pull the wool over the eyes of the Bihari voter on this issue.

The NDA is now making a puerile attempt to claim political brownie points by issuing an executive order which seeks to extend the compensation measures of the 2013 Act to land acquisitions done under 13 independent legislations such as National Highway Act, Electricity Act, Railway Act, Mines Act etc.

Under these pre-existing legislations, land was historically acquired by the state in accordance with its own compensation mechanism. The 2013 UPA land bill had specifically stated these 13 legislations would also become subject to the same compensation framework as provided for in the main land acquisition Act. This process was to be completed by December 2014 as per law. This did not happen as the NDA had embarked on a different track altogether by promulgating an ordinance which sought to overhaul the 2013 Act.

Now the BJP is claiming exclusive credit for extending, through a hurried executive order, the compensation mechanism of the 2013 land law to these 13 separate laws under which land is to be acquired. The Congress has raised a technical point that this cannot be done unless all the 13 laws are separately amended by Parliament so that the compensation mechanism of the 2013 land acquisition Act can be extended to them.

The BJP is clearly trying to confuse issues by telling farmers that it has extended the scope of compensation to land acquired for national highways, railways, electricity infrastructure. While it is well known that the 2013 land law had a provision for extending the scope of compensation to these areas, the real issue the BJP is diverting attention from is how the NDA’s original ordinance had sought to dilute crucial provisions relating to mandatory consent from 70% of farmers, and the social impact assessment.

Indeed, these were the most contentious issues plaguing the ordinance which underwent several changes as it got re-promulgated twice. In the end, the BJP’s own members voted in favour of both the critical clauses in the select committee of Parliament last month. This was indeed a big defeat for Narendra Modi’s original stance that the 2013 land bill was both anti-industry and anti-farmer. This position was articulated on several occasions by finance minister Arun Jaitley who said the 2013 law would make it impossible to build rural roads and provide rural electricity and irrigation infrastructure. This position seems so hollow now, as the NDA embraces the 2013 land legislation.

While the BJP may come up with several reasons to explain its loss of legitimacy on the land ordinance, the fact is Prime Minister Modi is no more the political strongman he projected himself to be until sometime ago.

To explain away his retreat as tactical is to misread the situation. The land ordinance was built as a “make or break” issue by Modi and Jaitley. There was a reason for this. The global finance capital community, with its gushing admiration for the PM, always wanted three major reform items to be pushed through – easy and less costly land acquisition for industry, labour reforms with a smooth hire and fire mechanism, and the Goods and Services Tax. Of these, the first two seem unlikely in the near future. The third, though possible, is caught in a bitter political stand-off between the BJP and Congress.

The international rating agencies reflect the collective sentiment of finance capital. Recall how global rating agency Moody’s had upgraded India one notch—from stable to positive—a few months after Modi came to power. The NDA ministers tom-tommed this as a big achievement. Now the same Moody’s is not so big on Modi. It has indicated that it might review its decision of last year after watching the fate of the land bill, labour reforms etc. Moody’s has also downgraded India’s GDP growth forecast for 2015-16 to about 7%, which is actually about 5% going by the old GDP series (very few international analysts totally believe India’s new GDP series which is under review).

So Narendra Modi is caught between the unenviable task of reconciling the basic aspirations of the Bihar electorate and the pressures of global capital upon which rest some of his key slogans like “Make in India”, “Start up India” and so on. The bigger question, of course, is one of legitimacy. Winning Bihar is important for Modi because it will help him recover some of the confidence and legitimacy he might have lost in the past six months. So he will do anything to recover it, even if this means standing NDA’s stated policies on their head.