These metaphors – of intention, harmony and 'azadi' – are crucial to understanding the modes of rhetoric and rule that the PM will pursue to maintain his position as the unquestionable representative of the people of India. 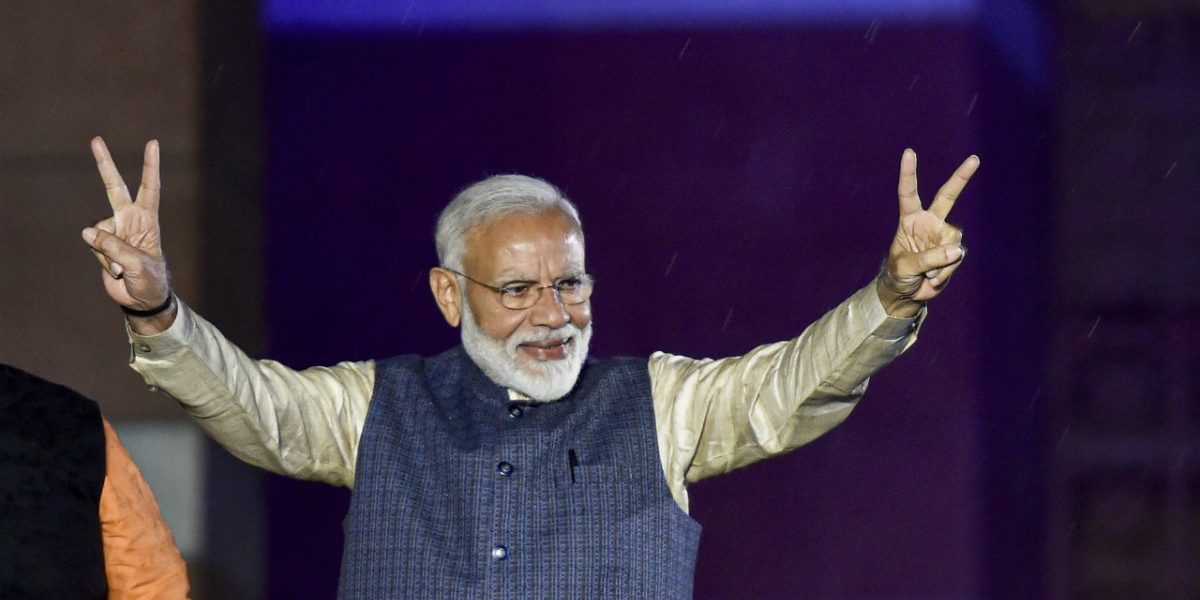 Narendra Modi is going to take his oath as the prime minister of India for the second time on Thursday. What is his next term going to look like? The layered political speech he delivered at the Bharatiya Janata Party (BJP) headquarters in New Delhi last week can help gain some insight into his vision for a ‘new India’.

This ‘victory speech’ provided a snapshot of his role as a leader, his understanding of the Indian polity and a blueprint for his future political strategy. Many have focused on Modi’s dismissal of secularism in this speech. While it is important to do so, the close focus on secularism takes attention away from the metaphors that the prime minister employed to establish a ‘new’ political vocabulary for the populist wave that has brought him to power again.

These metaphors are crucial to understanding the modes of rhetoric and rule that the PM will pursue to maintain his position as the unquestionable representative of the people of India.

The demand to be assessed for his ‘intentions’ over his ‘actions’

A constant refrain describing Modi during this election campaign has been ‘the chemistry of hope’ that ‘our leader’ shares with the people of India. This refrain allowed for the projection of Modi as an irrefutable leader, no matter the performance of his government. In order to continue this rhetoric beyond the campaign, Modi declared “aane waale dino main, kaam kartey kartey galti ho sakti hain, lekhin main badh iraadhey se, badh niyat se, koi kaam nahi karoonga.” (In the days to come, my work may have many mistakes, but I will not do anything with the wrong intentions or character).

By giving precedence to his singular intentions over those of a cabinet or government, the PM-elect has reduced the accountability that India’s massive government and bureaucracy should demonstrate through complex welfare and policy measures. Politics, as defined by him, need not be about holding a government accountable for its actions, but about leading a people with the right intentions.

The calculated decisions of governance will be more a question of substantiating, rather than defining, Modi’s new form of doing politics itself. The PM-elect has effectively projected himself as the embodiment of all that a people need from their government, rather than enabling a participatory and accountable form of representation.

After a divisive election campaign, many interpreted Modi’s redefinition of the polity in terms of two harmonious ‘castes’ as a reconciliatory gesture. According to Modi’s new framing, “Iss desh main sirf do jati rehne waaley hain… Ek jati hai gareeb aur doosri jati hai desh ko gareebi se mukth karwaane ke liye kuch na kuch yogdaan dene waley” (India will now consist of only two ‘castes’: first, the poor that needs to be alleviated from its poverty and, second: those who will enable this alleviation. Any contentious relationship that might exist between the two has been skilfully undermined in this depiction of the polity).

In defining the polity as such, Modi has strategically done three things. First, he left the super-rich out of the picture. With no mention of the rich, it is unclear who he may be referring to as the second ‘caste’. Will this second ‘caste’ refer to philanthropists, policymakers, party workers or, not uncharacteristically, himself alone?

Further, in evoking a harmony between the poor and those who enable poverty alleviation as descriptive of the new Indian polity, Modi has completely entrusted the former with determining the welfare of people as a whole. In doing so, the PM-elect has demonstrated that the gains which various oppressed groups in India made in terms of claiming their own rights to life, education and employment, will now be undercut by the supposed goodwill of the second ‘caste’.

In making this statement, the PM-elect indicates his intention to erode any subversive politics of identity. He provides a rhetorical strategy to counter those who demonstrate how identity plays a big factor in enabling their marginalisation, subjection to a different culture and experience of violence, making them unequal citizens in a diverse country.

Effectively, the voices of Dalits, OBCs, Schedule Tribes, and religious, sexual and linguistic minorities will be collapsed into that of ‘the poor’ at large. The reasons, history and attitude towards their specific forms of poverty will be made irrelevant in the political discourse shaped by Modi.

The pre-independence usage of azadi was central to the civil disobedience movement against colonial rule. Modi, in his speech, recognised how the ‘spirit’ of azadi manifested itself through conscientious and civil acts of disobedience against the colonial government. What he did not acknowledge was that azadi came to depict a similar spirit among civil dissenters during his previous tenure as prime minister.

Also read: The 2019 Mandate Is for Stability, Not Bigotry

For today’s India, Modi wants to evoke a refashioned ‘spirit’ of azadi. This spirit must not be directed against the government. Rather, its erstwhile anti-colonial fervour should be redeployed into building a sense of duty among people towards the collective goal of a prosperous India.

In effect, Modi has divorced the term azadi from civil disobedience and appropriated it for the service of his populist vision for a ‘prosperous India’. According to his vision, it is not his government which has to take responsibility for conscientious acts of civil disobedience. Rather, it is the citizen who now needs to take responsibility in enabling the populist vision of their leader. The onus of a prosperous India has shifted from good governance to good citizens.

Given this, the claim for azadi cannot be employed as a conceptual slogan in opposition to political oppression, but will be appropriated as a concept by the ruling leader and the majority population following him. The political culture surrounding the use of the term azadi will drastically change. Its ideological usage will shift from self-describing disobedient citizens to the populist description of obedient citizens.

Modi’s capacity to deploy his rhetoric of azadi, a casteless, harmonious polity, and his best intentions for governance, within political discourse will determine the success of his populist project in his next term. These are the metaphors he will employ to capture his vision for an India constructed around a collective nationalist subject proceeding in the name of the majority.

If politics is about the metaphors we use to define our collective lives, then we need to note the ones which Narendra Modi uses to define and sustain his power in Indian politics. Questioning these might be less about ideology, and more about providing a better metaphor for the complexity, diversity and disobedience constituting India.

Shaunna Rodrigues is a Ph.D. candidate and Teaching Fellow at Columbia University in New York.