Fact Check: Was Modi Really Unaware of the Pulwama Attack For Over Two Hours?

The Congress says he chose to continue with his scheduled programme – including, allegedly, a shoot with the Discovery channel – instead of attending to what he himself would later describe as an incident that made his blood boil. But it is possible the filming could have been concluded before news of Pulwama reached the PM. 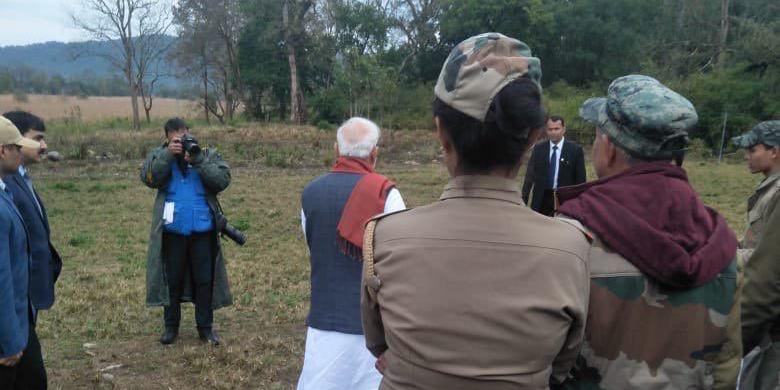 New Delhi: One week after the Pulwama attack, mystery still surrounds the time and manner in which Prime Minister Narendra Modi was informed of the suicide bombing that not only took the lives of 40 jawans of the Central Reserve Police Force but has also brought India and Pakistan to their worst military standoff since 2001.

While the question is of utmost relevance from the standpoint of national security, it is not devoid of political significance either, given that the opposition has suggested Modi chose not to cut short a trip to Corbett National Park on February 14 – the day of the bombing – because he wanted to appear in a documentary on wildlife being made by Discovery channel, which had been given time that day.

The Prime Minister’s Office did not answer a questionnaire from The Wire about Modi’s precise schedule on February 14, while the principal information officer of the Government of India said on Friday that he had nothing to add to what Union law minister Ravi Shankar Prasad’s general response to media queries the previous day.

Though neither Prasad nor anyone else from the government or ruling party is willing to speak about Modi’s engagements that day, a ‘fact check’ published by the Times of India on Friday claimed the Congress had made a “false claim of PM Modi shooting for film at Corbett 3 hours after Pulwama attack.”

However, the TOI ‘fact check’ itself does not stand up to scrutiny on the basic timeline for the day. The newspaper quoted unidentified sources – described by the newspaper simply as “government” – as saying: “Modi did a short shoot for tourism promotion and climate climate change awareness with Discovery and was heading to Rudrapur for a public meeting. As the news of the attack started trickling in around 4 pm, he was making his way from Corbett to Rudrapur”.

In fact, video footage on some TV channels and local newspapers has established that Modi left Corbett National Park between 6:40 and 7:30 pm that evening. The Nainital edition of the Hindi newspaper, Amar Ujala, also reported the departure time of the convoy for Rudrapur as 6:40 pm: and not 4 pm. 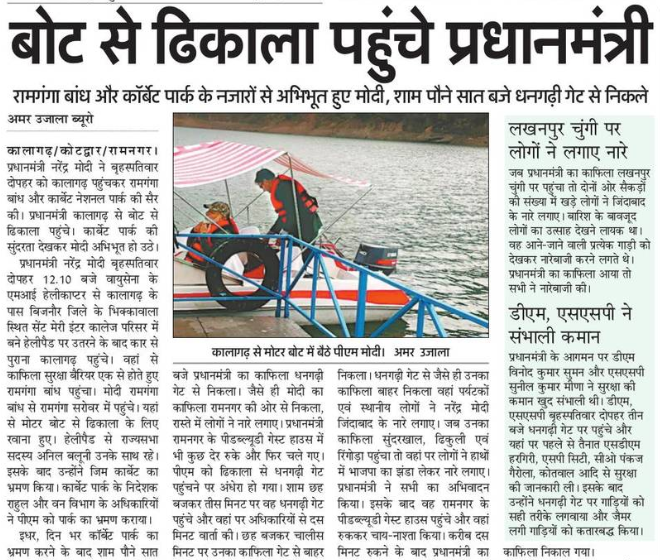 When the Pulwama attack happened around 3:15 pm (some reports say 3:10 pm), Modi’s scheduled visit to Corbett was already running several hours behind schedule due to inclement weather in Uttarakhand. According to his official schedule, the prime minister was supposed to arrive in Corbett at 9 am and leave at 2 pm. That was presumably the window given to the Discovery Channel crew as well. However, because of rain in Dehradun, where he landed from Delhi, his departure by helicopter was delayed by four hours. 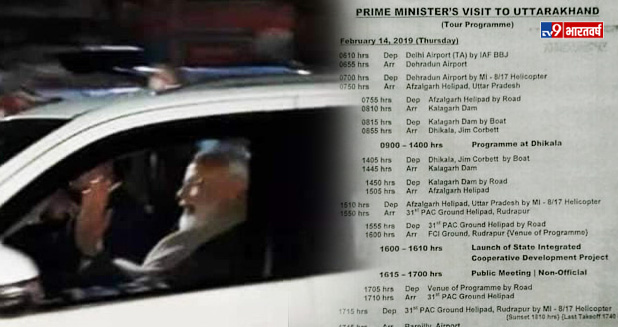 From the one still image of Modi posing before a photographer (wearing a kurta, pajama and red scraf) and one brief video clip of his in trousers giving an interview near a helicopter, it would appear that both were shot during the day and not evening. The video clip, where he had just alighted from a helicopter, was likely shot at Kalagarh around 11: 15 am, from where he embarked by boat to the Dhikala forest guest house. It is possible the Discovery crew were waiting at Dhikala and completed their shooting even before the terror attack at Pulwama. But with district and national park officials refusing to divulge any details about the Discovery shoot, it is impossible to tell whether Modi was filmed for the documentary after Pulwama had occurred or even after he had been informed about Pulwama – as the Congress alleges.

Certainly the Congress has not provided any proof to back up its stated timeline.

A former senior official familiar with national security protocols told The Wire that it is hard to imagine the basic information about the terror strike on the CRPF in Pulwama would not have immediately been shared with Modi as soon as the national security adviser had been made aware of it. “Once informed, it is up to the PM to decide what he wants to do – carry on with his scheduled programme or cut it short,” the former official said.

In the US, President George W. Bush was in a Florida school when an aide told him about the first plane commandeered by terrorists hitting the World Trade Center on September 11, 2001. He carried on with his interaction at the school for the next five minutes.

In Modi’s case, the information about Pulwama would likely have been conveyed to him within half an hour or so of the 3:15 pm bombing. Assuming he was at Dhikala in Corbett Park by noon and then the Dhikala guest house by 1 pm, he had shifted to the Khinanauli guest house a short distance away in the park by the time he addressed the Rudrapur rally by phone.

While it is not clear where the Discovery shoot occurred and whether it was before or after he would have been informed of Pulwama, it is a matter of record that he addressed a public rally in Rudrapur, some 85 kms away, by telephone from the Khinanauli guest house at 5:10 pm – by which time he would surely have been apprised of the terrorist incident. In that speech, however, he made no mention of the Pulwama attack, even though in every speech he has made since then, Pulwama figures prominently.

On Friday, Congress leader and former Union minister Manish Tewari upped the ante against the BJP, on the Corbett park issue, without adding any new information to corroborate the charge the party had levelled the day earlier. 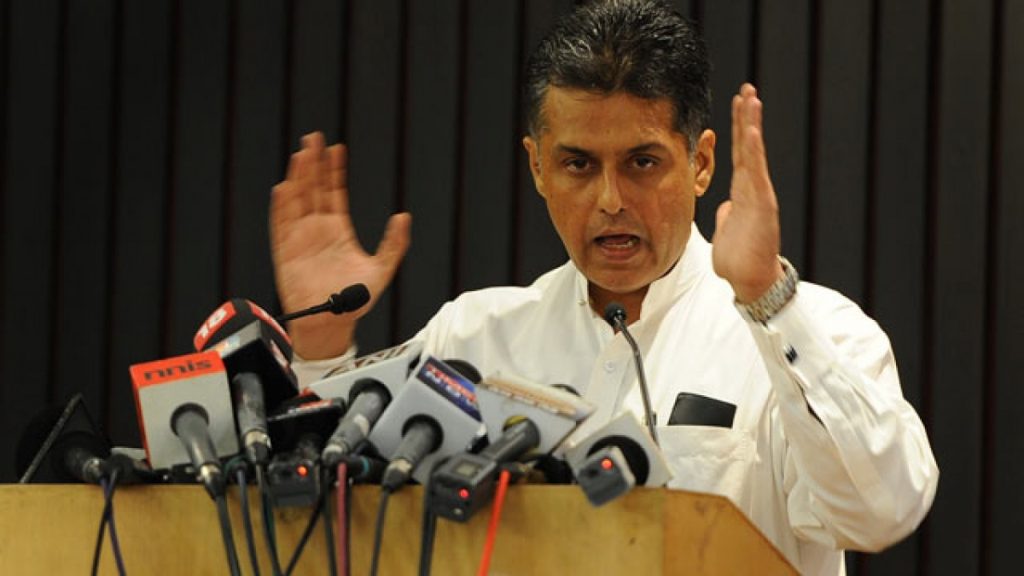 Playing a Doordarshan clip of the Rudrapur speech, Tewari said the prime minister did not mention Pulwama even once in his speech. Nor did he ask the jubilant crowd to observe silence. This, despite the fact that the channel was running a simultaneous ticker that said “10 soldier or 10 CRPF Jawans have died in Pulwama”.

1. Was the PM aware of the attack and yet continued with his photo shoot, “posing as commander Corbett?” Tewari said “if he was aware” and chose not to interrupt his schedule, “there can be no greater insensitivity.”

“He has his lunch, shoots some photographs of some wildlife on his mobile phone and life is absolutely normal for him, while 40 jawans have laid down their lives in one of the most heinous terror attacks the country has seen,” Tewari said.

2. “Between 03:10 pm and 05:10 pm, was the Prime Minister of India unaware that a terror attack had taken place in Pulwama?” He said that “the second scenario is far more frightening” and “is a cause of concern.”

He added if he was actually not aware, as some channels reported soon after the Congress’s allegations, then it points to a grave crisis in the “command and control systems in the highest echelons of the Indian state.”

“We are a nuclear state and if there is a breakdown in communication between the prime minister and his office, it has very portentous implications. That is why, this nation must know from the mouth of the prime minister, who otherwise speaks nonstop 24X7, that Mr. Prime Minister what were you doing between 03:10 pm in the afternoon and 05:10 pm in the afternoon,” the Congress leader asked, alleging “incompetence” on the part of the Modi government.

Gandhi contrasted the “martyrs’ river of pain”, with “Modi’s happy photoshoot on the river.” It would appear, however, that the river reference  is unfair as the picture was first posted on Twitter by a BJP supporter at 1:52 pm on February 14, more than an hour before the Pulwama incident, a fact reported by the TOI. The boat ride photo was likely taken even earlier.

Ever since the Congress on Thursday first raked up questions about the prime minister’s schedule on the day of the attack, the BJP has remained tight-lipped on the specific charges. The only defence put forward by BJP president Amit Shah and Union minister Ravi Shankar Prasad was to retort that the Congress was speaking in the language that “would please Pakistan”.

On Friday, Sambit Patra mounted an emotional attack on the Congress and equated the interests of opposition and Pakistan. He said the Congress was trying to politicise the tragic Pulwama attack, but did not address the questions over the prime minister’s schedule.

He urged all parties to stand together in the time of crisis, adding that many forces within the country were trying to “divide the people”. He refused to answer the Congress’s allegations and said that such “petty” fights between parties should not happen during a crisis.

A day before, however, at least one news channel, NewsX, ran a story quoting anonymous government sources that Modi was informed about the Pulwama attack only in the evening, around four hours after the attack and that he was reportedly angry with national security adviser Ajit Doval over this.

However, when questions began to be asked on social media about the government’s efficiency and alertness on this, the channel dropped the story.

If Doval didn’t inform PM about Pulwama attacks, what was @HMOIndia Rajnath Singh doing? Why didn’t he call the PM? And btw story has been dropped from the channel. https://t.co/ThtKw9vvEV

As Modi has also maintained silence around the controversy, The Wire emailed questions to Nripendra Misra, principal secretary to the prime minister, for clarity.

1. On 14 February, when was the prime minister informed about the Pulwama attack?

3. What immediate actions did he recommend to the PMO upon hearing about the attack?

Against this backdrop, the Congress attacked the Modi government for its “jingoistic arrogance and strategic ignorance.”

“When did the BJP get a monopoly over nationalism that one of their ministers very arrogantly stated yesterday that the Congress sounds like Pakistan? The NDA-BJP Government needs to understand that asking the hard questions and expressing solidarity with the nation in an hour of grief, in an hour of national tragedy are not mutually exclusive,” Tewari said.

He added that the BJP leaders, like the highways minister Nitin Gadkari, who stoked a controversy by tweeting that the flow of water from rivers of India to Pakistan should be stopped, are only diverting attention from important questions on national security.

He said, “As the oldest political party in this country, we will continue to ask hard questions because the nation demands answers from this government and we will not allow jingoistic arrogance to sweep monumental security failures under the carpet.”