"Nobody will be allowed to take away your reservation and give it to any other community in pursuit of their vote bank politics," the Prime Minister told OBCs and Dalits at an election rally on Monday. 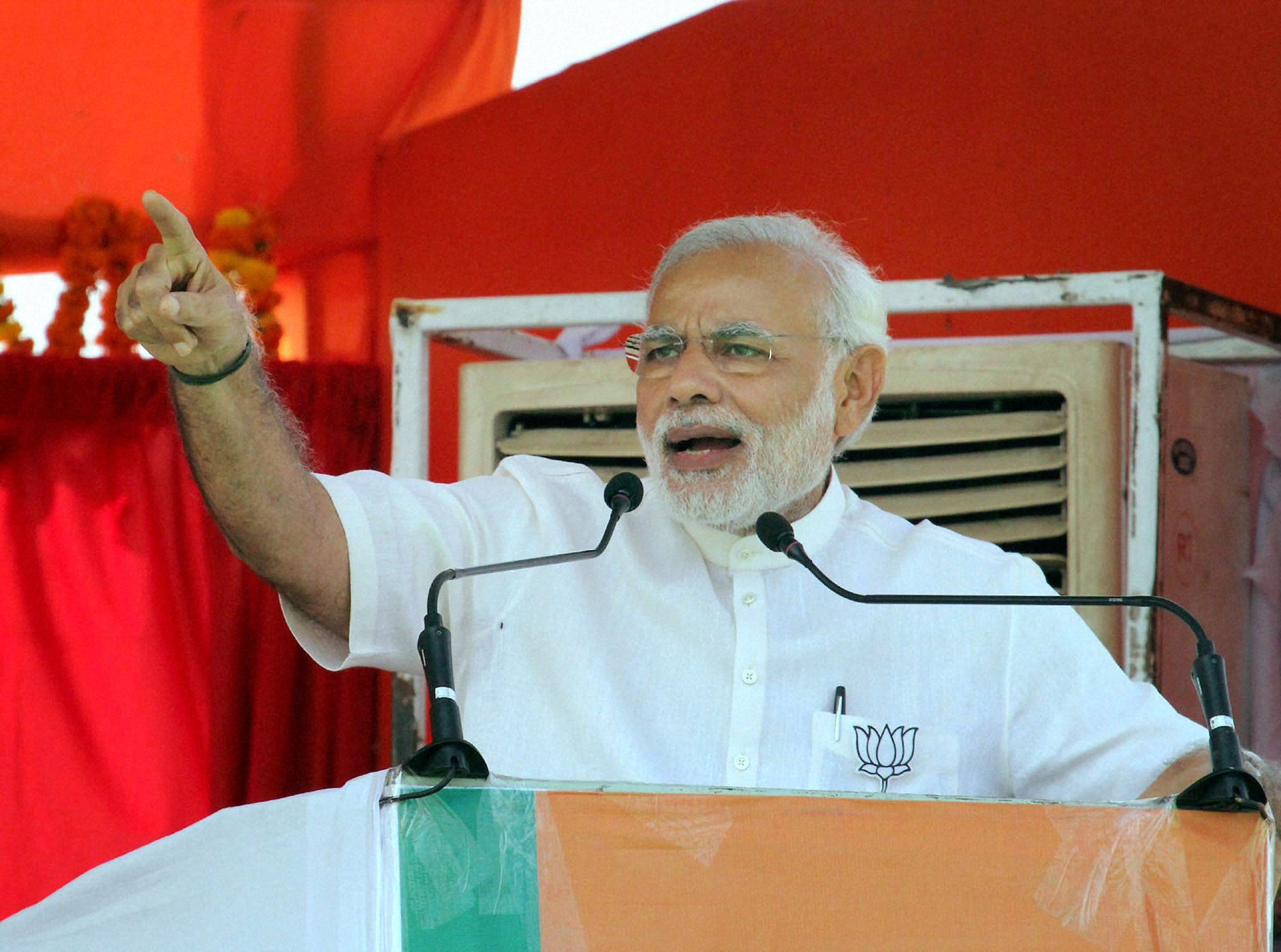 Buxar (Bihar): Openly pitting the dalit and ‘backward class’ voters of Bihar against the state’s Muslims, Prime Minister Narendra Modi on Monday accused the grand coalition led by Nitish Kumar and Lalu Prasad of plotting to reduce quotas for SCs, STs and OBCs by five per cent in order to benefit “a particular community”.

Modi’s decision to generate resentment against Muslims in this manner appears to be his way of deflecting the Mahagathbandhan’s charge that the BJP is looking for ways to end reservations. Citing an interview the RSS chief Mohan Bhagwat gave last month in which he called for a debate on the system of affirmative action, Lalu has sought to paint an apocalyptic picture of what might happen to the OBCs and dalits in the event that the Bharatiya Janata Party-led NDA wins the ongoing assembly elections in Bihar.

“The leaders of this ‘Mahaswarth’ (opportunistic) alliance are trying to mislead the people on the issue of reservation … It is clear through the discussion of our constitution makers that reservation cannot be given on the basis of religion. The Supreme Court has said reservation cannot be more than 50%. There is a cap,” Modi said at an election rally in Buxar.

“These leaders are making a devious plan. They are conspiring to take away five per cent reservation of dalits, mahadalits, backwards and extremely backwards and give it to a particular community,” he alleged. “I come from an extremely backward class and understand the pain of having been born to a poor woman. I will not allow this to happen. I pledge to protect the rights of dalits, mahadalits and backwards,” he said.

Calling this a sinful plan (‘paap ki yojana‘), Modi said: “Nobody will be allowed to take away your reservation and give it to any other community in pursuit of their vote bank politics.”

If the anti-BJP alliance is voted to power ‘Jungle raj’ will return and crimes like kidnappings and atrocities on women will rise, he warned.

Modi also attacked Bihar Chief Minister Nitish Kumar and RJD chief Lalu Prasad for not acting against the corrupt and cited recent examples where their MLAs and candidates were allegedly found taking bribe and “fixing deals”.

Attacking leaders of the grand alliance, he said a JD(U) MLA and a candidate of Lalu Prasad’s RJD had been caught red-handed taking bribe, but no action was taken against them.

“I want to ask these people, why are they silent on the issue of corruption after they were caught on camera taking bribe. Even before the polls, they are selling away Bihar and striking deals.

“Should Bihar be handed over to those who are out to sell it? Should Bihar be given to them? Should those who engage in corruption and protect the corrupt be allowed to form a government in Bihar?” he asked.

Hitting out at RJD chief Lalu Prasad, he said, “For them taking money is no big thing.”

Taking a dig at Nitish Kumar for his promise of providing computers to the youth, Modi wondered how the machines will work in the absence of electricity.

Moreover, he said the computers have contracted the “Lalu virus” resulting in “lawlessness”, with crimes like atrocities on women and kidnappings on the rise.

“Your (Nitish’s) computers have ‘Lalu virus’ which is venting out ‘Jungle raj’, crime, atrocities on women and kindappings. That is why Bihar’s youth do not want this Lalu virus-hit computers as they do not want lawlessness and crime to rise,” he said.

Modi claimed the large crowds at NDA rallies have left the grand alliance worried and its leaders were now trying to “defame” him and taking to ‘mantra’ and ‘tantra’ (occultism).

Modi claimed while NDA’s goal was to take Bihar to greater heights by ushering in development, his rivals were only interested in defaming him.

“Their path is to defame Modi, while ours is to initiate development and take Bihar to greater heights. The decision has to be yours, Friends,” he said.

He also questioned JD(U) and RJD for opposing the Women’s reservation bill in Parliament and asked Sonia Gandhi as to why she was aligning with such leaders.

The Prime Minister demanded that Lalu and Nitish give an account of what they have done in the state in the last 25 years. “If they can’t give an account of the 25 years of their rule in Bihar, should not they be punished for this?” he asked.

In fact, for at least eight of those years, the BJP was part of the ruling establishment in Bihar.