From invitation cards from district collectors to false promises of getting the opportunity to speak to the prime minister, and even plain old intimidation to take away existing benefits, the state government gave it its all to fill up buses for the event.

Jaipur: For the 2.5 lakh ‘beneficiaries’ who attended Modi’s rally in Jaipur today, the ‘first-time-ever’ prime minister-beneficiaries interaction, a lot was done by the state machinery to ‘convince’ them reach the venue – be it invitation cards from the district collectors, false promises of getting the opportunity to speak to the prime minister or plain old intimidation to take away existing benefits.

For Sighni from Jalore, it was the fact that her MGNREGA wages are at stake that moved her to attend the rally. “We were told that if we won’t attend this, our wages under MGNREGA will be shut forever. So, we had no option other than to come here.” 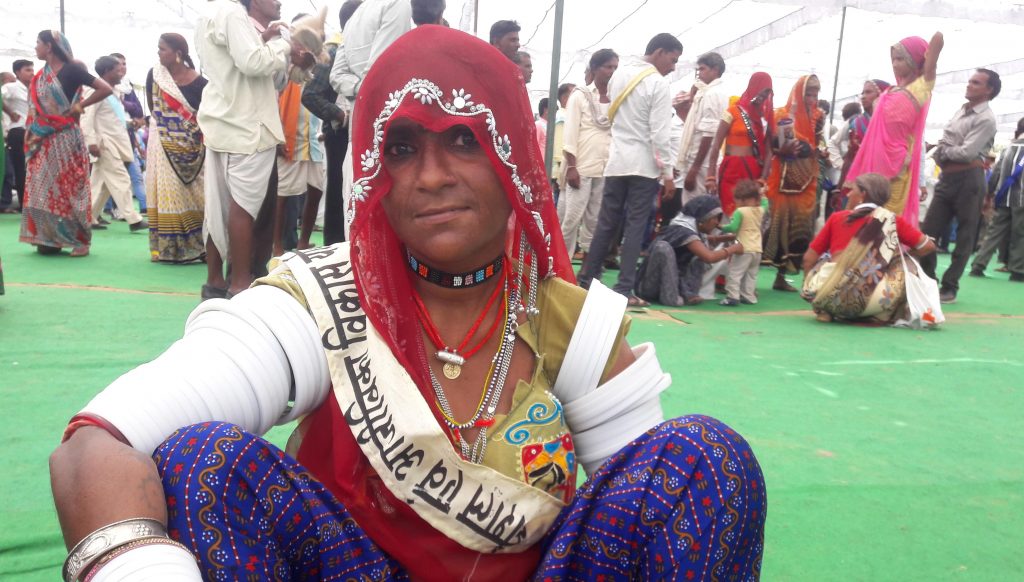 Teja from Udaipur was overwhelmed after receiving a personal invitation letter from the district collector for the function. “We are very simple people and it’s not easy for us to turn down any invitation, that too from the collector,” said Teja. Like Teja, many received invitations either from a collector, MLA, sarpanch or any other influential people of their area. 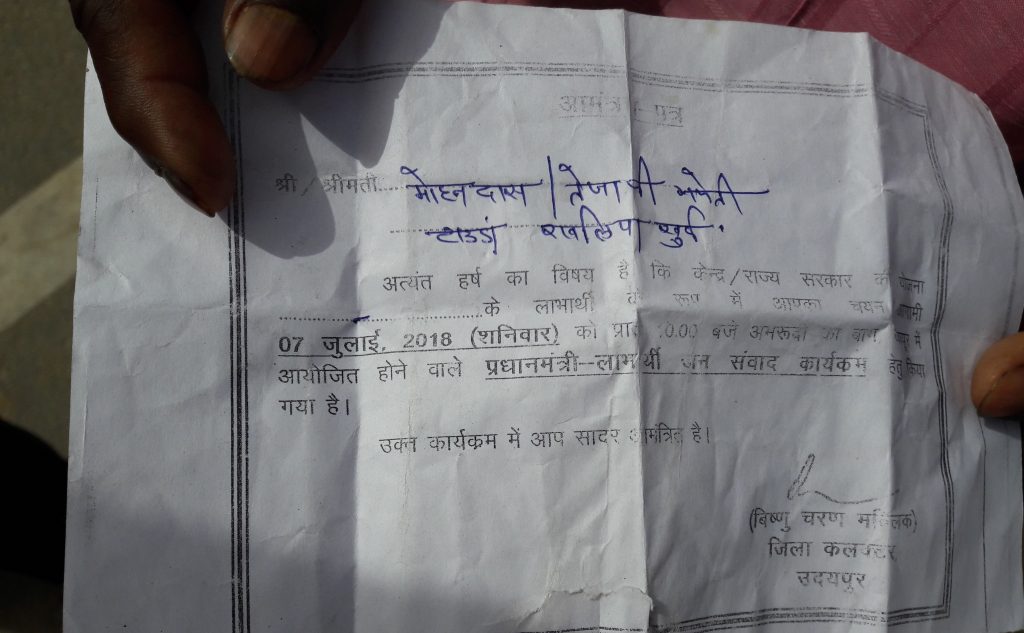 There were yet others who came to attend to make a complaint before the prime minister about how they hadn’t received any benefits despite all the formalities. “My daughter is about two now but no money under the Chief Minister Rajshree Yojana has reached in my account even after submitting all the required documents. I hope to speak to Modi, as it is he who has called us here, and tell him my problem,” Santosh from Jhalawar told The Wire.

Even Nathu and Gopal from Udaipur had a similar story. The two, who were registered under the labour card and Jal Swavlamban Abhiyan schemes at the event, said, “We have not received any benefit from any government scheme but we still came here  just to meet Modiji.” 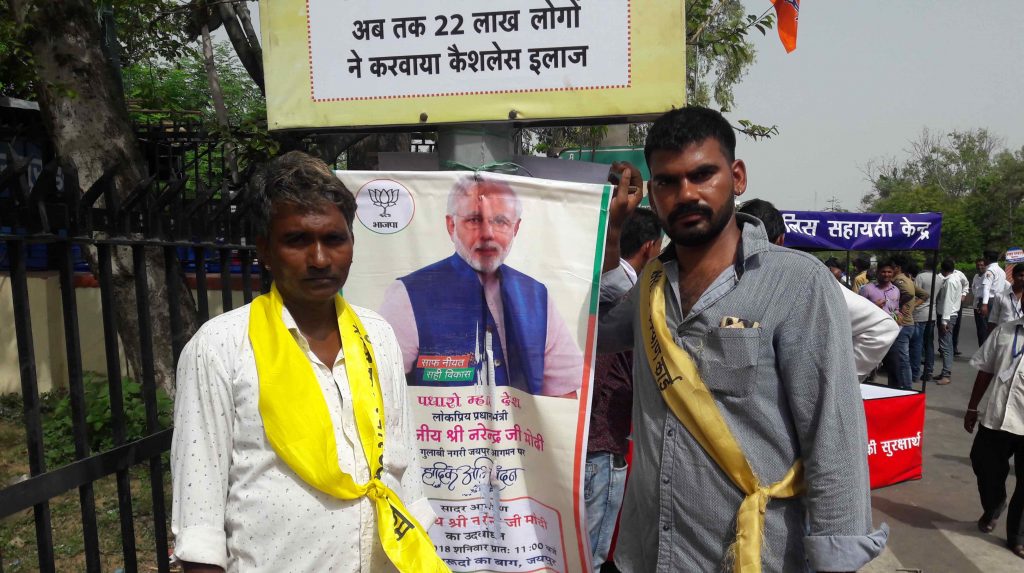 The Rajasthan government started many schemes over the last two years that involve handing out payments in instalments. Even those who have received just a single instalment were included as ‘beneficiaries’ at the event. “Under the PM Awas Yojana, we have received only the first instalment of Rs 30,000. Even a tractor of sand costs more than Rs 50,000. How are we supposed to start construction work with such little assistance?” Seema from Bharatpur told The Wire.

Among the 2.5 lakh beneficiaries invited to the event, Kaluram and Sushil were among those who are pursuing a course under the PM Kaushal Vikas Yojana in Dausa but have yet to find employment. 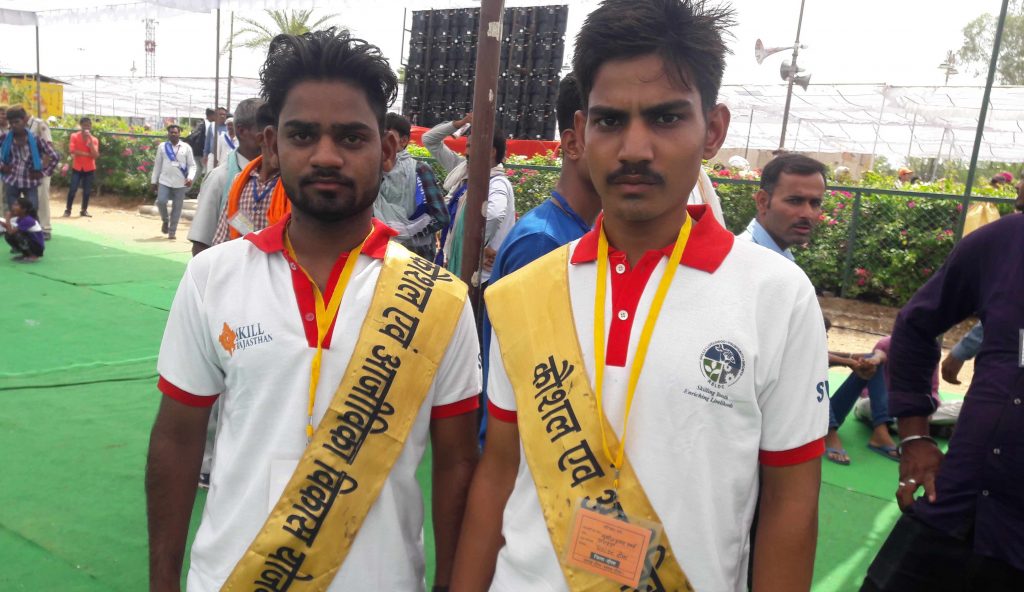 Many beneficiaries, who travelled miles overnight to see Modi, were fooled when  look-alike made an appearance dressed in a kurta pajama. He crossed the crowd, waving at them, as a few men chanted “Modiji, Modiji” in the background. A near-stampede situation almost took place until they finally realised it wasn’t the PM.

The hopes of many attendees to get to speak with the prime minister were shattered when Modi restricted his listening to the pre-recorded unilateral experience sharing of a mere 12 beneficiaries of 12 different government schemes.

Even when the PM got the chance to interact with the same beneficiaries on stage, he didn’t give them the chance to add anything good or bad in their experiences. The beneficiaries handed over the flowers to Modi while chief minister Vasundhara Raje asked on the microphone, “Dhanyawad bol rahe hai na? (Are they saying thank you?)”

The BJP state government spent over Rs 7.23 crore on the event. Around 5,579 buses were used for transporting the 2.5 lakh beneficiaries from across the state to the venue. However, the procedure as to who would be selected has not been disclosed. 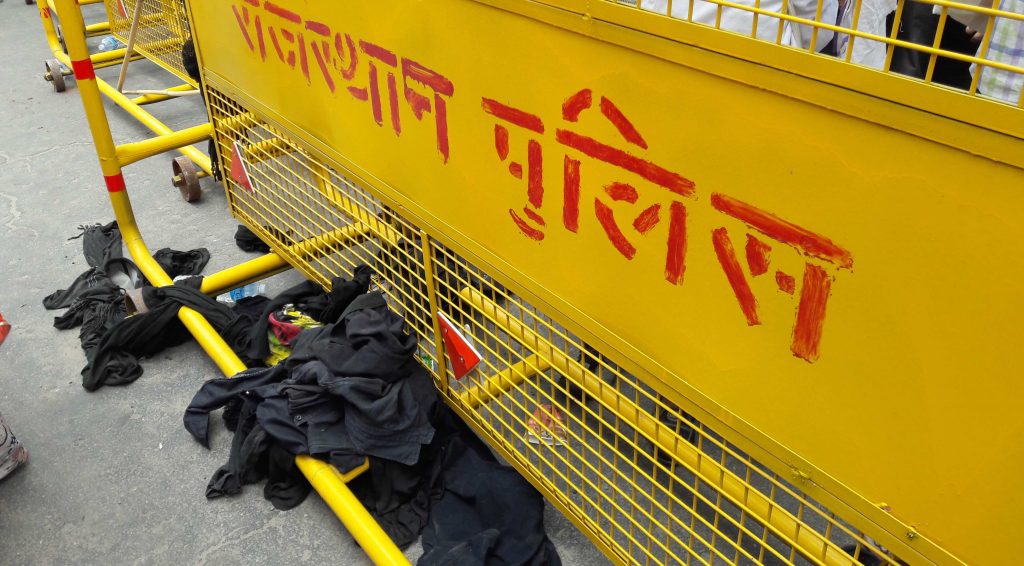 Black belongings of the gathering that wasn’t allowed inside the rally. Credit: Shruti Jain/The Wire

At the event, the only identity of the beneficiaries were the colourful sashes representing different government schemes given by the respective coordinators. No person was allowed to enter the event without a sash, irrespective of having received any benefit from the government schemes. In fact, those who were in attendance had no proof of having received any benefit other than the sashes and the cards made by the panchayat samitis.

The anganwadi centres who keep the records of the beneficiaries under the Chief Minister Rajshree Yojana were unaware about the beneficiaries being listed from their wards. “We didn’t receive any information to give out the names of beneficiaries from our area. Maybe they are calling them personally,” Jyoti, an anganwadi worker from Jaipur told The Wire.

In Sawai Madhopur, the district education officer issued an order for all principals of government schools to help beneficiaries board the bus for the rally in Jaipur. “No one knows whether the people got the benefit or not, we were just asked to help fill the buses,” a government teacher from Sikar said. 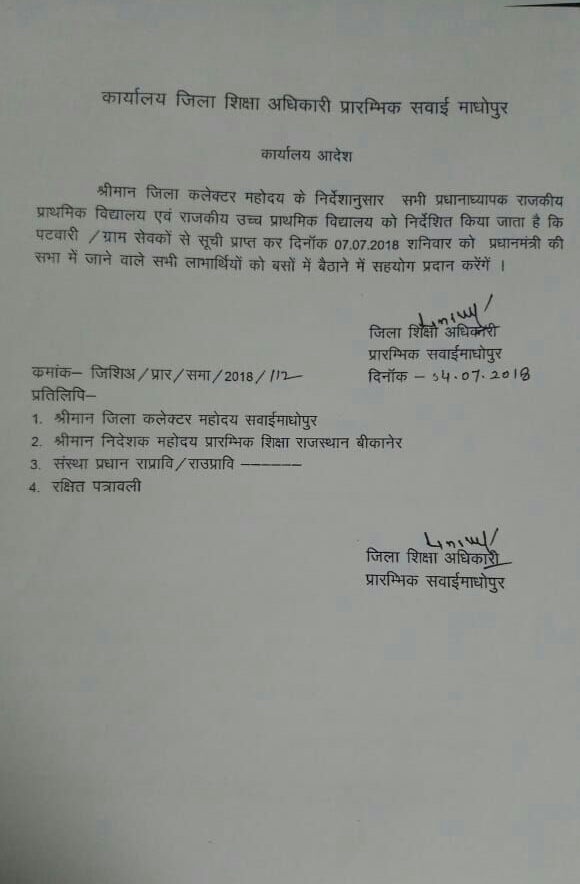 Copy of the order of the District Education Officer, Sawai Madhopur.

One more thing that added to the mystery of the beneficiaries were the schemes they were representing – many men were seen wearing the sashes of the schemes meant especially for the women – like the Rajshree and Ujjwala schemes. 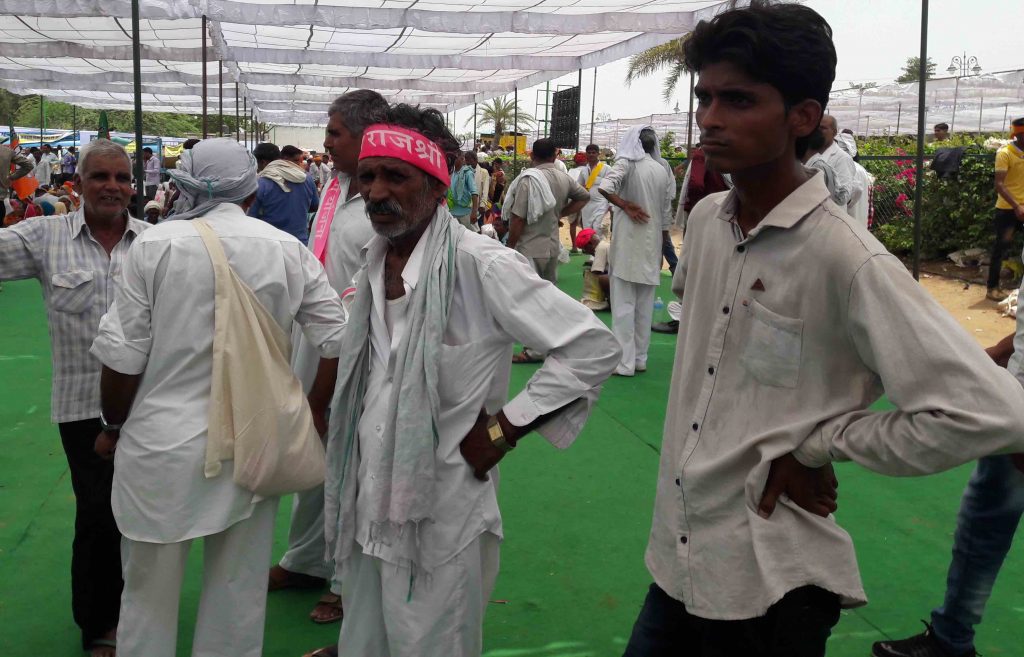 Speaking to The Wire, T. Ravikanth, Divisional Commissioner, Jaipur said, “I’m not aware if there was any such orders about the collectors giving invitation letters to the beneficiaries. May be the collectors could answer. Whichever department is running the scheme, they were supposed to inform the beneficiaries through their lower level functionaries.