In Udaipur, Congress's interim president said Modi’s regime has taken to “viciously targeting, victimising and often brutalising minorities who are an integral part of our society." 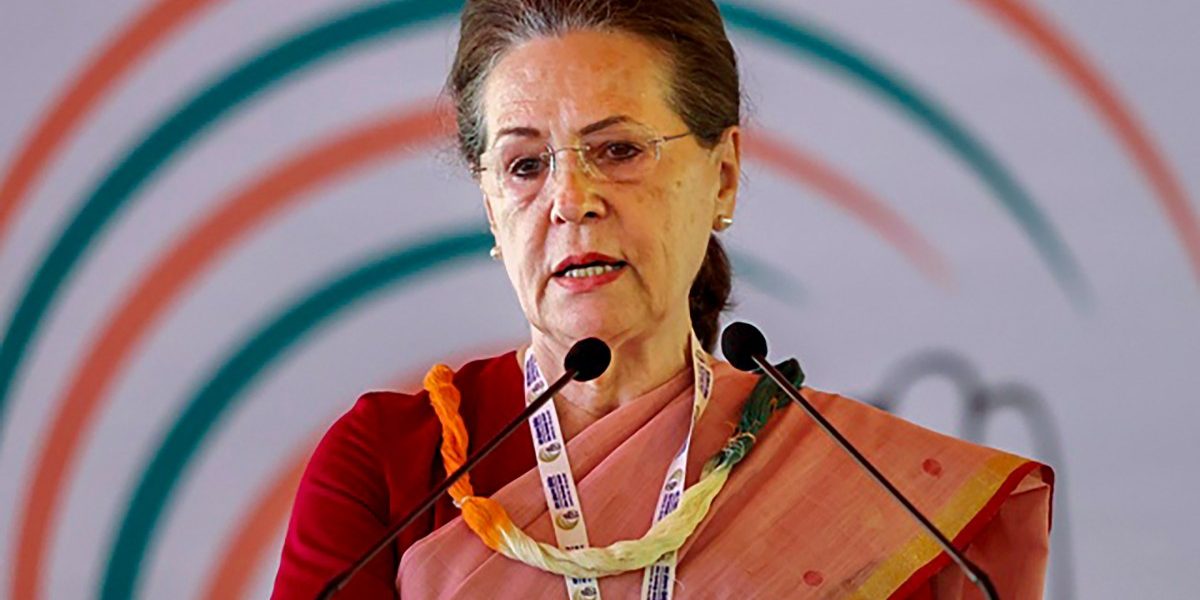 Speaking at the three-day Chintan Shivir or ‘brainstorming camp’ in Rajasthan’s Udaipur, Gandhi in her introductory remarks said that the bigotry promoted by Modi has shaken “the very foundation of economic growth” that helped India rise in stature during the Congress regime. At the same time, she acknowledged that the challenges before the Congress in the face of a rising Bharatiya Janata Party under Modi’s leadership are “unprecedented and extraordinary”.

As the party is considering an organisational overhaul, a new leadership and ways to overcome political challenges before it, Gandhi also said that the shivir was also an opportunity to discuss “the numerous challenges that the country is facing as a result of the policies of the BJP and of the Rashtriya Swayamsevak Sangh and its affiliates”.

“By now it has become abundantly and most painfully clear what Prime Minister Modi and his colleagues really mean by their frequently repeated slogan: maximum governance, minimum government. It means keeping the country in a state of permanent polarisation, compelling our people to live in a constant state of fear and insecurity,” the septuagenarian leader said.

“So, it (the Chintan Shivir) is both a chintan about national issues and a meaningful atma-chintan about our party organisation,” she said.

She added that Modi’s regime has led to “viciously targeting, victimising and often brutalising minorities who are an integral part of our society and are equal citizens of our republic” and subverting society’s age-old pluralities and diversities to divide Indian citizens. 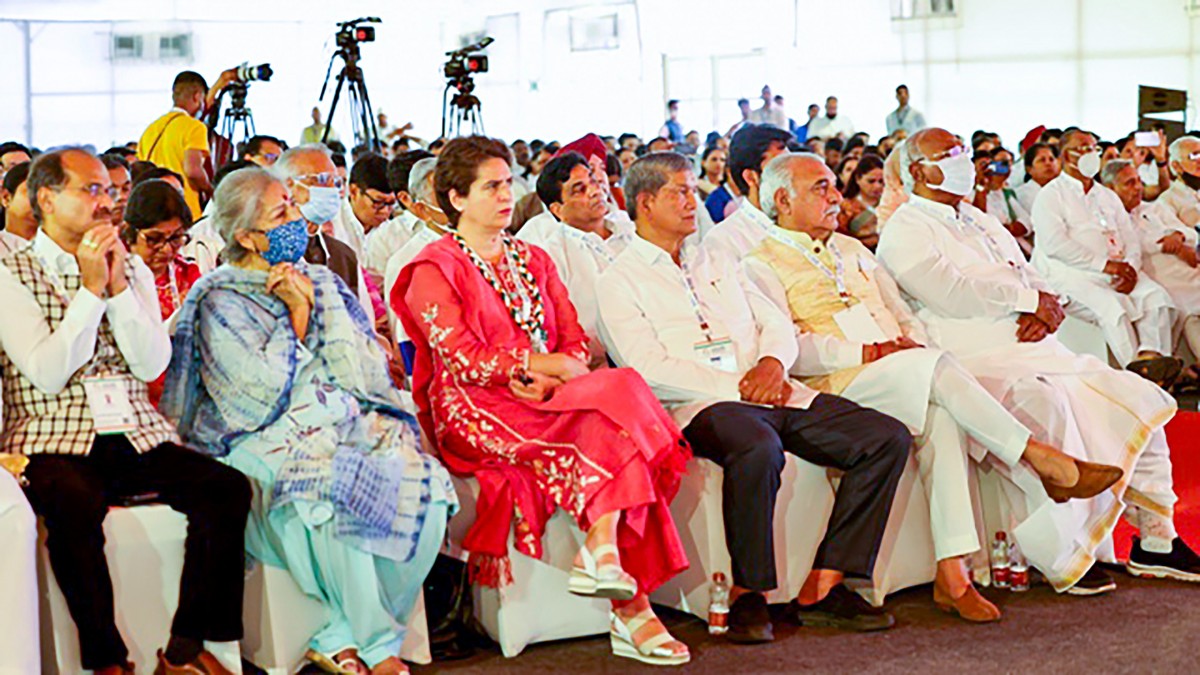 AICC General Secretary Priyanka Gandhi Vadra and others during day one of the Congress Nav Sankalp Chintan Shivir, in Udaipur. Photo: PTI.

Gandhi said that the BJP regimes have also unleashed an era of “ threatening and intimidating political opponents, maligning their reputations, jailing them on flimsy pretexts, misusing investigative agencies against them”.

She said that the BJP regime has meant “eroding the independence and professionalism of all institutions of democracy”, “wholesale reinvention of history”, “the constant denigration of our leaders”, “glorifying the killers of Mahatma Gandhi”, and “the blatant undermining of the principles and provisions of our nation’s constitution”.

She said that there has been a concerted attempt to turn a blind eye towards atrocities on Dalits, Adivasis and women, and use pressure tactics and fear to make the bureaucracy, corporates, civil society and sections of the media fall in line.

“It (BJP regime) means more empty slogans, diversionary tactics and utter silence on the part of an ever so eloquent Prime Minister when the healing touch is most needed,” she said.

Also read: Your Silence in the Face of Enormous Societal Threat Is Deafening: Former Civil Servants to Modi

“The vast majority of Indians want to live in an atmosphere of peace, amity and harmony. The BJP, its cohorts and surrogates want to keep our people in a state of perpetual frenzy and conflict. They constantly provoke, instigate and inflame. We have to combat this growing virus of divisiveness that is being maliciously and mischievously spread. This we must do at all costs,” she said.

She went on to criticise some of the Modi government’s decisions like demonetisation and unbridled privatisation of public sector units, farm laws and its failure to generate adequate employment and stem price rise. She also drew attention to Congress’s achievements like MGNREGS and National Food Security Act.

The Congress leader had similarly hit out at the BJP in the last CWC meeting in which the shivir was planned. Her added emphasis on what Congress’s political agenda should also be, one of the primary agenda at the shivir, has come at a time when Congress leaders’ focus is primarily to address manifold problems within the party. The shivir was first announced after a section of senior leaders openly dissented against the allegedly ineffective leadership of Gandhis.

Gandhi, however, presented herself as the leader of all. Sensing that there was disenchantment among many leaders who were not invited to the shivir, she made it a point to say that “not being here does not in any way devalue the role they are playing in our organisation”.

She said that while participants at the shivir must not hesitate to put forward their critical views regarding the workings of the party, it is important that Congress should still present itself as a united house in public. By emphasising on political agenda instead of organisational problems, Gandhi put forward Congress’ core differences with BJP, in what also appeared to be a placatory message for the dissenting leaders.

She also urged the party leaders to work for the party selflessly. “The party has given all of us so much, now it is time to pay off the debt.”

A large section of leaders – both senior and young – similarly asserted the need to draw up a larger political agenda at a time when the party appeared to be confused regarding a cohesive ideological positioning.

Addressing a press briefing, one of the young leaders Ragini Nayak said, “The idea of the shivir is also to provide a compelling vision for the country, a framework, and action plan to draw youth towards the party.”