The prime minister's veiled reference to Raja Suheldev's story pointed to the right-wing's efforts to appropriate a popular medieval Dalit leader's legacy and project him as a 'cow protector'. 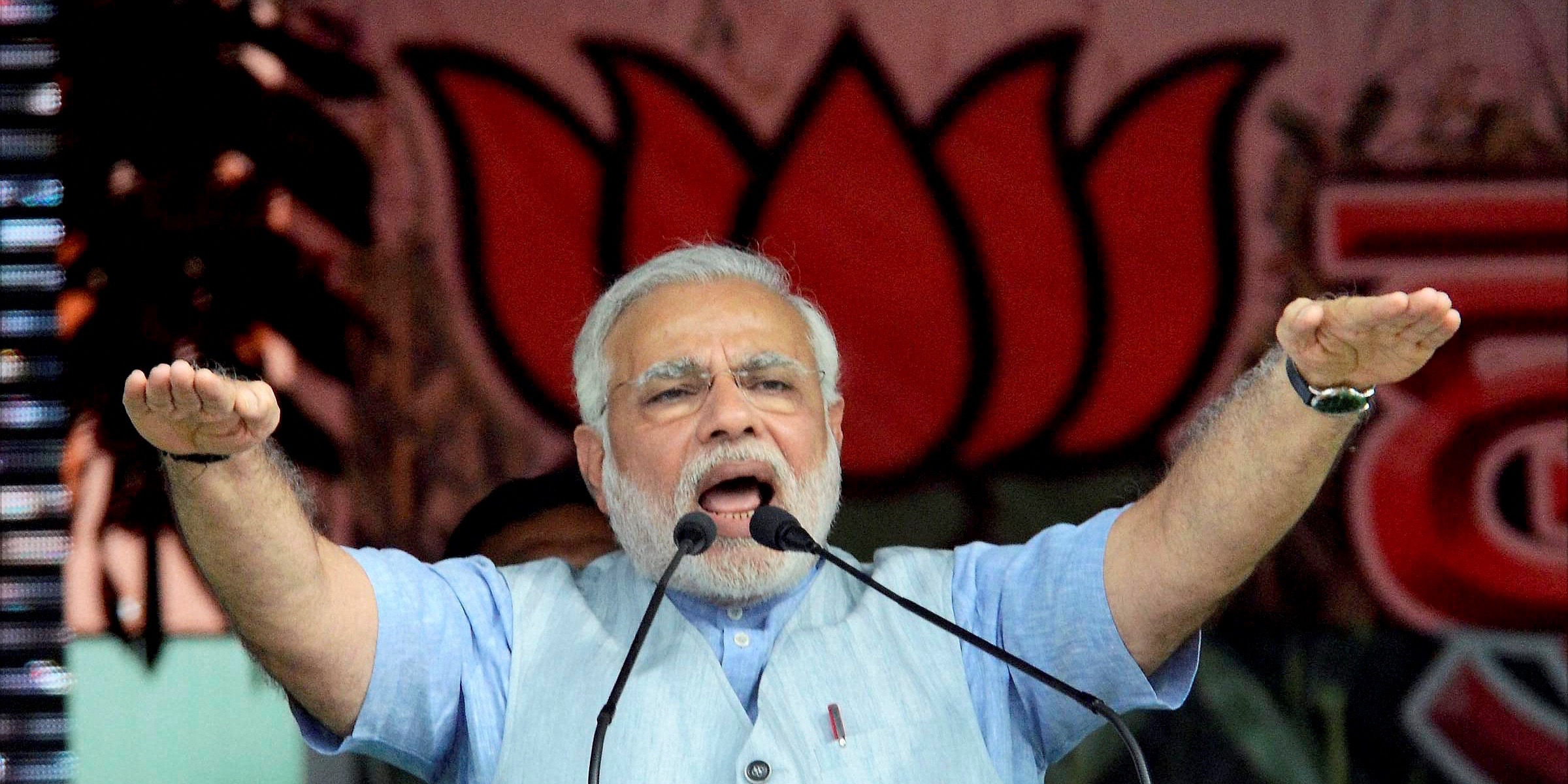 The news has its own importance. After all, in the wake of his own remarks on “pink revolution” (cow killing on a mass scale), Modi was addressing the ongoing vigilante violence of cow protectors, directed first at Muslims and now at Dalits, for the first time. A much awaited reaction from the head of state.

However, almost all the print and broadcast media based out of Delhi missed out on an important reference that the prime minister made to emphasise his point – even though it has a direct bearing on the coming Uttar Pradesh assembly elections.

Before calling some cow protectors “anti-social by night and gau rakshak by day”, Modi narrated the story of ‘Badshah and Raja’.

He said, “Purane zamaane mein aap ne dekha hoga Badshah kya karte the. Apni larai ki fauj ke aage gai rakh dete the. Raja ko parishani hoti thi ki var kare to gai maregi aur paap lagega. Isi uljhan me woh haar jate the.” (You must have sen in the olden times Badshah used to put a herd of cows in front of his army. It put the Raja in a dilemma. That if he proceeded to fight he needed to kill the cows and thereby be sinned. He lost the war in this dilemma.)

Even though he stayed away from making any direct reference to who that particular ‘Badshah’ was and who that ‘Raja’ was, those who follow the politics of Uttar Pradesh vis-à-vis the state’s Dalit voter base – and also those who identify themselves as gau rakshaks – would know who was who.

The ‘Badshah’ Modi referred to was none other than Ghazi Saiyyad Salar Masud and the Raja, a Dalit Hindu king, Suheldev. Modi made a veiled reference there to the war of Bahraich in the 11th century. That battle may be of minor significance in recorded history, but has its own importance in popular history, particularly in UP.

The prime minister knows the importance of this incident in the Dalit politics of UP, especially since the 1960s. Not just the BJP and its fount, the Rashtriya Swayamsevak Sangh (RSS), but also the Congress, the Bahujan Samaj Party (BSP), Samajwadi Party (SP) and others had tried owning Raja Suheldev from time to time to wrest Dalit votes. The story is also useful to consolidate Hindu votes.

Though all parties use Suheldev to their advantage, the events of the last few years indicate that the RSS-BJP have made use of his name, and particularly the “Badshah and Raja” story, to reach out not only to Dalits but also to give a hero to the gau rakshaks from among the Dalits and help “return Dalits to Hinduism”.

Who was Raja Suheldev?

Mirat-e-Masudi, a 17th century Persian historical romance, also referred to as a biography of Sayyiad Salar Masud (he was the nephew of Mahmud of Ghazni), mentions Suheldev as a chieftain of the Shravasti area, near present-day UP’s Bahraich district. According to some accounts, he belonged to the lower caste Pasi community.

According to the Delhi-based Indus Research Centre, Suheldev “was the son of Mangal Dhwaj and disciple of Balak Rishi whose ashram was located in Bahraich.”

The Hindu right wing-influenced research centre, whose stated objective is to set up an “Indo-centric research centre” and “provide research support to elected representatives and the activists”, certainly knows Suheldev’s importance in the “local imagination” and “caste memories” of UP. The centre gives credence to Suheldev’s story by attempting to provide some historical veracity to it. It does this by giving a blow by blow account of an 11th century event in an essay that has an authoritative tone despite not citing any evidence other than hearsay.

It eulogises the king for upsetting the advance of the army of Mahmud of Ghazni by “either beheading” Masud or by inflicting on his throat an arrow that led to his death “under a mahua tree” by Lake Suryakund, held sacred by the Hindus for its healing properties.

The essay titled ‘The Forgotten Battle of Bahraich’ also refers to attempts by many castes and sub-castes in UP to own Suheldev. “In the popular culture and memory, he (Suheldev) is known as one among the Pasi kings but is claimed by several other castes as well, most notably by the Bhars. He is also claimed to be a Kshatriya of the Nagvanshi lineage or a Bais/Vais Kshatriya by some. This is not surprising due to the obvious difficulty of projecting the modern day caste identities in the history and also due to the division and assimilation of castes and formation of new castes over the period,” writes the essay’s author Abhinav Prakash, an alumnus of Delhi’s Jawaharlal Nehru University.

He claims, “During the invasion by Salar Masud, regions of Lakhimpur, Sitapur, Lucknow, Barabanki, Unnao, Faizabad, Bahraich, Sravasti, Gonda, etc. were ruled by a confederacy of 21 Pasi chieftains under Raja Suheldev.”

Though history books say Suheldev was finally killed by Mahmoud’s army, the essay calls it a “claim” and states the popular history as saying, “However, it also seems that Suheldev survived the battle and constructed several water tanks in and around Shravasti to commemorate his victory. The Chandradeo of Kannauj (claimed to be an old foe of Suheldev) later subverted him as the defeat of the Muslim army re-ignited the old rivalries.”

Prakash’s essay doesn’t corroborate Modi’s story but he does rue two things – one, that “not much work has been (done) on the historical event which halted the victorious march of the Islamic imperialism”; and two, a site held sacred by the Hindus was turned into a dargah in Masud’s memory.

“What has happened is that the place has become the place of pilgrimage during the Urs of ‘Bale Miyan’ or ‘Ghazi Miyan’ towards the end of May in Jyeshtha month. It is the process of acculturation which has Islamised the Hindu folk tradition.”

“But the memory of the great king has persisted in the popular local imagination and caste memories,” he says.

On Saturday, Modi tried to invoke that “popular local imagination”. He also used it to send out a vital message to the gau rakshaks about Suheldev, a Dalit. In the last few decades, Suheldev has been projected by the Hindu right wing outfits, particularly in UP, as a cow protector. Perhaps therein lay the reason why the prime minister, who kept quiet when the cow protectors attacked Muslims, chose to speak out when they went after the Dalits.

That the ‘Badshah and Raja’ story is known among the ranks of BJP-RSS was corroborated by a BJP member from Kanpur Dehat to this correspondent on Sunday, “Everyone knows this story. Masud planned to put a herd of cows in front of his army to defeat Suheldev. He knew that Suheldev would not attack the cows. But Suheldev got to know about it and he ordered his army to clandestinely let loose the cows in the night before the war. He thereby became a hero by not only saving the sacred cows but also by killing Masud.”

The politician, who preferred to remain anonymous, said, “In 2001, an organisation called Maharaja Suheldev Sewa Samiti was formed by some of our like-minded people. Events like nautankis and plays are regularly organised on his great victory over Mahmud of Ghazni in various parts of UP with help from the BJP.” He added, “Our party is not the only one doing it. Almost all parties talk about Suheldev for political reasons. When Mayawati came to power, she built many statues of Suheldev in the state.”

“Oral history has been an important part of India for centuries. But our professional historians refused to look at them. Even though worldwide oral history is being recognised, our historians have vested interests and are partisan towards it,” RSS member Rakesh Sinha told The Wire. He gave an example of the claimed “partisan attitude” of the historians, “For instance, in the Nehru Memorial Library and Museum, it has given space to oral history by recording interviews of people related to partition. But those are people these historians want to support. If tomorrow I point out about Suheldev, I will be told it has no historical evidence.”

Said well-known medieval historian and former JNU professor Harbans Mukhia in response, “These stories have their own importance, but professional historians will have to look at them as mere folk tales. As a historian, I am mandated to work on the basis of evidence, dates, logic, cogency and the many layers that spring out of an event. In the absence of it, they are mere folk tales.” He underlined, “You have to see that battle of Bahraich from the overall perspective. There is written evidence that he finally couldn’t stop Mahmud’s army from advancing further into UP.”

The professor added, “It is because of this reason (lack of evidence and logic) that there is a wide gap, not just in India but elsewhere too, between professional history and popular history.”

His explanation of the formation style of the armies of various Muslim invaders also debunked Modi’s ‘Badshah and Raja’ story of “putting a herd of cows before it”.

“Before Babur invaded India, the formation of the army of the other Sultans while approaching their enemy was in mass form. Hundreds of foot soldiers and horses and elephants would clash. In a war, mobility or the ability to swiftly go from one place to another is vital. So by putting a mass of men and animals together, it was a tactic to restrict the enemy from moving swiftly and thereby overpower it,” he explained.

“After Babur came,” he continued, “many things changed. He divided his army into five segments – right, left, centre, vanguard and reserve. While the vanguard would first attack the enemy, the soldiers in reserve would take over once all the other four segments of Babur’s army and also the enemy’s army would exhaust themselves. The Rajas lost out to Babur’s army because of this tactic. The Rajput kings later learnt this tactic.”

“Also,” he related, “Babur brought guns with him which were put in front of an invading army. Basically, huge stones were thrown at the enemy with the help of these huge guns. Gunpowder was used to push the stones through the barrel.”

Such stories may be good for history books but to suit the political game, parties in UP would rather stick to Modi’s ‘Badshah and Raja’ story. Additionally, the Hindu right wing outfits have also been using this “caste memory” to push Dalits to “return to their ancestors’ roots.”

Though it is difficult to say how regular these “homecoming” events are, a report from March 2013 said, “A total of 180 people belonging to 36 families of eight villages under Jaunpur district of Uttar Pradesh returned to their ancestors’ roots at a homecoming ceremony on March 17. The function was organised under the banner of Shravasti Naresh Rashtraveer Suheldev Dharma Raksha Samiti. Over 500 people from ten adjoining villages also attended the function.”