Between 35-40% of candidates in the UP elections have a criminal record. Many criminal acts have ideological legitimacy, resulting in reward rather than punishment, as seen in the case of the UP BJP president. 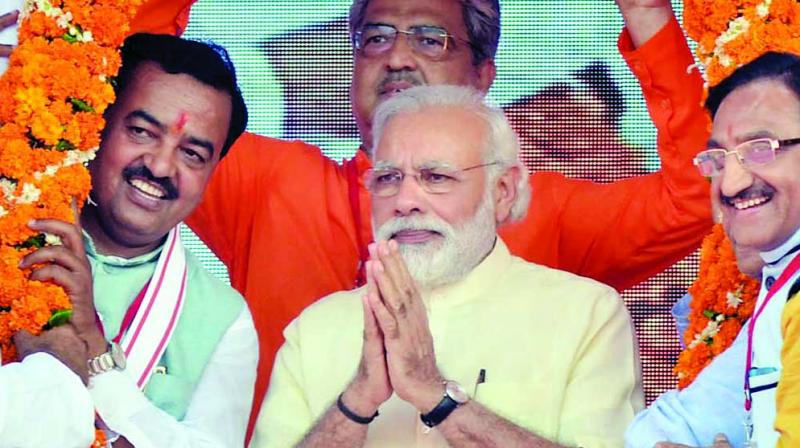 Writing for The Telegraph, historian Ramachandra Guha has cited new data provided by the Association for Democratic Reforms (ADR) based on affidavits submitted to the Election Commission, which put the BJP at the very top of the list of candidates with criminal charges in the first phase of the Uttar Pradesh elections, at 40%. The Bahujan Samaj Party (BSP) comes next, with 38% of the candidates having criminal charges.

However, in the second phase of polling in UP, the Congress has the highest score, with 36% of candidates facing criminal charges. Samajwadi Party tops in the third phase with 41% of the candidates having criminal charges against them. Guha juxtaposes these facts with Narendra Modi’s explicit promise during the 2014 election campaign (quoted in a recently released book titled When Crime Pays: Money and Muscle in Indian Politics by Milan Vaishnav) that if he became prime minister, “No accused (with criminal charges) will dare to fight polls. Who says this cleansing is not possible.”

In another statement cited in the book, Modi says with a sense of urgency, “We have to do away with criminalisation of politics and delivering more lectures won’t help”. As it happens, Modi is doing precisely that – delivering more lectures on the subject of cleansing politics and eliminating political crime and corruption. Of course his lectures assume different forms from time to time, and the latest comes in the garb of demonetisation which is meant to cleanse the system.

The reason why one is recalling Modi’s statements from the 2014 election campaign is to demonstrate that the new dispensation perhaps lacked even the intent to incrementally change the system. Otherwise why would Modi have allowed Amit Shah to appoint Keshav Prasad Maurya, facing about a dozen criminal charges – also having been chargesheeted and put to trial in a murder case – as the president of BJP in India’s largest state by voting population?

Indeed, Maurya’s appointment as UP BJP president in April 2016 had caused ripples even within the BJP. The old guard did not approve of this, but Modi and Shah decided to brazen it out saying the criminal cases against him were politically motivated. Interestingly, Maurya himself gave a statement to the Times of India asserting that most of criminal cases against him were on account of “leading protest movements for the people”. Of course, this was not entirely true because one serious case pertained to the murder of one Chand Khan, for which he was chargesheeted and even underwent trial. However, some of the leading witnesses in this case did not cooperate after Maurya won the 2014 Lok Sabha elections from Phulpur – the erstwhile constituency of Jawaharlal Nehru – with over five lakh votes. His growing clout within the BJP seemed to have coerced the elder brother of the deceased to withdraw from pursuing the murder trial.

Maurya’s meteoric rise in the UP BJP after Modi’s takeover of the party knocks the bottom out of the prime minister’s claim that he would decriminalise politics. He continues to give tickets to candidates with criminal records, as the latest ADR data reveals.

Indeed, Maurya’s elevation symbolises legitimacy to a different brand of criminalisation in politics – criminalisation underpinned by ideology. Note that Maurya’s rise from a tea seller and newspaper hawker to becoming the state unit president has come after his consistent activism in the past as sangathan mantri in the Vishwa Hindu Parishad, which led the Ram temple campaign in 1991 in UP. He was also nagar karyavah in the local RSS unit at one time. The eventual demolition of Babri Masjid was a criminal act which is still under trial. However, those associated with such acts of crime with intended ideological underpinning are being promoted as policy by the BJP. The then district magistrate, K.K.Nayar, who actively connived to place the idol of Rama inside the Babri Mosque in 1949 was rewarded with a Jana Sangh ticket and he became a Lok Sabha MP in 1952. No wonder Maurya openly claims that many cases against him pertain to participating in protest movements, which could be about Babri Masjid in the past or “gau rakhsha” in more recent years.

While Vaishnav’s book talks about the traditional role of money and muscle in politics, we also need to recognise criminalisation derived from sustained ideological motives. The brief history of Hindutva consolidation and the progressive recruitment of backward castes and Dalits in movements such as the one for a Ram temple and cow protection are different from the traditional ‘social bandit’ phenomenon where criminals rise in politics by partially controlling the ‘coercive functions’ as well as ‘welfare functions’ of the state.

The ideological basis for criminalisation too has a history, as can be seen from the way the idol of Rama was illegally placed inside the Babri Mosque complex in December 1949. The subsequent decades saw a sustained movement around it often with blatant criminality, as seen in the demolition of the masjid and the mass violence resulting from it in the Mumbai riots documented by the Sri Krishna Commission. Indeed, this movement also has a link to the Godhra and Gujarat violence – triggered by the burning of the train carrying kar sewaks.

The larger point is people like Maurya, who have proudly participated in such ideological movements marked by grave criminal acts from time to time, get systematically rewarded in the BJP. Predictably, the Sangh parivar tends to brush aside such criminality as aberrations, which they are not if seen as a continuum from 1949 to 2017. This is not to detract from the “Bahubalis” of Bihar and UP who are spread across in all political parties, as the latest ADR report shows. But the rise and rise of ideological warriors in politics with impressive criminal records needs to be studied separately, as they come with a different kind of motivation.