Modi and the Muslims: The Prime Minister Is Out to Roll Back the Vajpayee-Advani Legacy

A majoritarian politics creates its own catechism of virtuous violence. The BJP has been purged of what remains of the attitudes and impulses of accommodation and reconciliation in a multi-faith society. 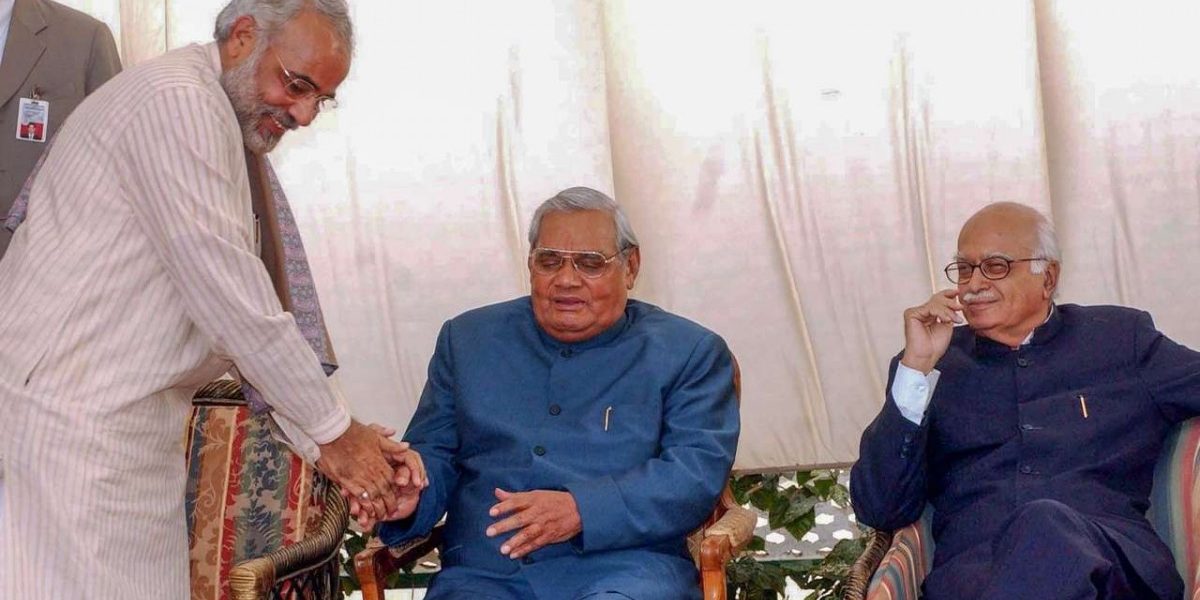 A clue to the Nupur Sharma-centric convulsions can perhaps be found on page no. 316 of senior BJP leader L.K. Advani’s autobiography, My Country My Life. Advani is recounting the first plenary session of the Bharatiya Janata Party in Bombay on December 28-30, 1980, at Bandra Reclamation (adjoining the Arabian Sea). After going rapturous over Atal Bihari Vajpayee’s eloquent address, Advani writes:

“The Bombay session will also be remembered for the special appearance of Mohammed Currim Chagla, a former minister in several Congress governments at the Centre and a hero of the struggle against the Emergency. In his address, Chagla, who had by then long retired from politics, remarked, ‘who says there is no alternative to the Congress in the country? I see the alternative right in front of me in the form of the Bharatiya Janata Party. And in Atal Bihari Vajpayee, I see the alternative to Indira Gandhi.’

Chagla pointedly refuted the charge that the BJP was  a communal party. ‘Indira keeps repeating,’ he said, ‘in the newspapers and on radio every other day that this party is dominated by the RSS, that it is communal, and that every communal riot that takes place is caused by the RSS. That is a charge I would like to refute. The BJP is not a communal party.”

The bottom-line of Advani’s exertions is this: in 1980, when the BJP began a new journey, it desperately needed a certificate of “no communal horns” from a respected ‘nationalist’ Muslim. And, M.C. Chagla has always been the sangh parivar’s role model for an ideal “nationalist Muslim.”

Chagla became who he was when, invited by Prime Minister Jawaharlal Nehru to make India’s case on Kashmir in the Security Council, he looked squarely at Zulfiqar Ali Bhutto – a great orator and arguably the most venomous political presence in South Asia at the time – and told him and the UN Security Council:

“Muslims are not a minority in India in the ordinary sense of the term. They constitute 50 million of the total population of India. India is the third largest Muslim State in the world. Muslims are sons of the soil, they are Indians by race and they enjoy all the rights of citizenship. Every office is open to them, and in fact, many of them hold the highest offices in the land. Our civilisation is a synthesis of many diverse cultures, and the Muslim contribution is one of the most significant. Ours is a secular State and an egalitarian society, where everyone enjoys equal opportunities and the equal protection of the law. We have no official religion. Hindus, Muslims, Christians, Buddhists, Sikhs, Parsis and others have full freedom of worship, and fundamental rights under the Constitution are guaranteed to every citizen. We have no first-class and second-class citizenship. Before the law everyone is equal.” That was on February 5, 1964.

If a man named Mohammed Currim Chagla finds an honourable mention in the memoirs of the “modern builder” of the BJP, it is a reminder that the saffron party during the Vajpayee-Advani era subscribed to a prudent and practical working philosophy: that while it was feasible for the BJP to come to the power nationally without the votes of the Muslims, it would be problematic for it to operate the Indian political system without their support and participation. 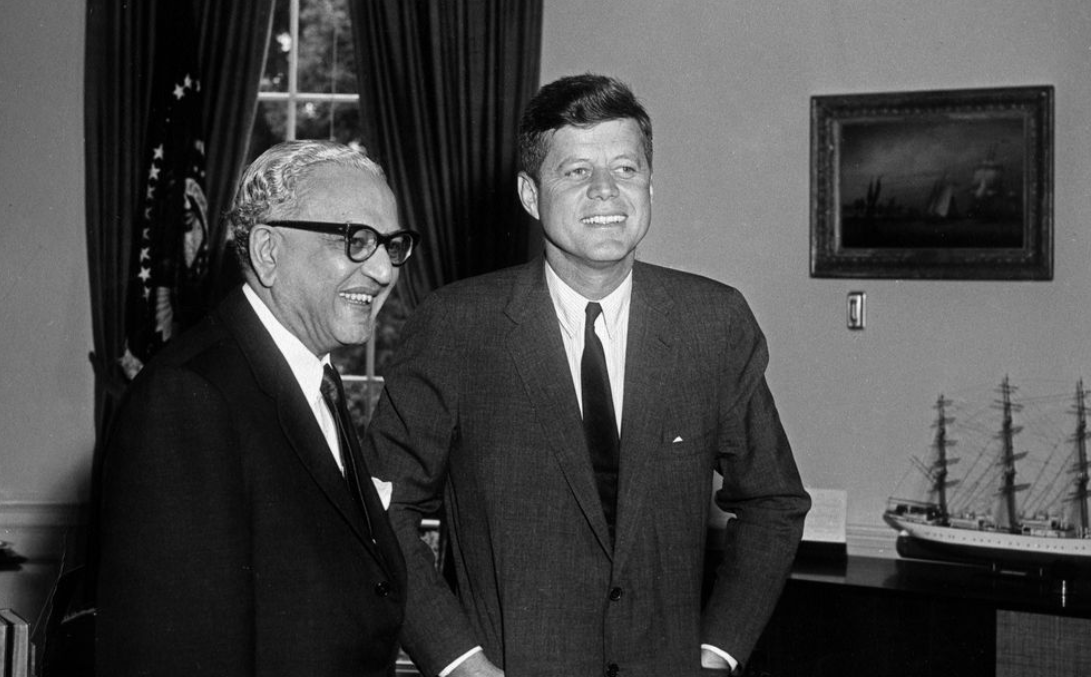 M.C. Chagla (left), as ambassador to the United States, with President John F. Kennedy at the White House, 22 May 1961. Photo: Wikimedia Commons

Indeed, when the Jan Sangh was reinvented as the BJP, among its first three general secretaries was a ‘nationalist’ Muslim – Sikandar Bakht (the other two being, L.K. Advani and Suraj Bhan, with Vajpayee as the president.) Ironically, it was the same Sikandar Bakht whose marriage to a non-Muslim, just before 1947, was violently opposed by the RSS-Hindu Mahasabha cadres. The BJP needed Bakht as its “Muslim face”. So much so that when celebrating its silver jubilee, a book-length compilation, Political Resolutions, 1980-2005, was dedicated to “the memory of Shri Sikandar Bakht”. The BJP had always felt the need to walk the extra mile to induct a Najma Heptullah here, or an Arif Mohhammad Khan there, an M.J. Akbar as an added bonus, each one of them having convenient reasons to climb the BJP’s gravy train.

The Vajpayee-Advani leadership understood the need to send out a signal to the Muslim community at home and the world at large that it was mindful of the Chagla formulation: “Muslims are sons of the soil, they are Indians by race and they enjoy the rights of citizenship. Every office is open to them…”

It is useful to remember that one of the most inspired decisions Vajpayee took as prime minister was to induct A.P.J Abdul Kalam as president of India. Kalam was picked to help the world forget the atrocities that were committed against the Muslims in Gujarat on chief minister Narendra Modi’s watch in March 2002. And, of course, later on, he came in handy again when the “new India” needed to erase Aurangzeb’s presence from a New Delhi street.

It is equally useful to remember that the first confrontation Modi won was against his own prime minister, Vajpayee, who tried hard to send the chief minister packing in the aftermath of the Gujarat riots. As chief minister, Modi resented Vajpayee for trying to read him the riot act; he simply could not countenance the statecraft which required the need to make amends for the anti-Muslim violence of 2002.

It is possible to suggest that as prime minister, Modi is waging as much of an ideological battle against Nehru and his legacy as against Vajpayee and his imprint on the BJP. The first order of the day had to be to purge the BJP of what remains of the attitudes and impulses of accommodation and reconciliation in a multi-faith society. No one will walk the extra mile to be seen as amenable to the Muslims. There will be no Rajya Sabha for Mukhtar Abbas Naqvi.

The signal has gone out. The M.C. Chagla template is no longer needed because everyone must believe in the leader’s jumla, “sab ka saath, sab ka vikas”. The leader has spoken and no further proof of inclusiveness is needed nor will be offered. A majoritarian politics creates its own catechism of virtuous violence. A Nupur Sharma slips unconsciously into this rhetorical trap prepared consciously for the likes of her by the master puppeteer.