Modi 2.0: A Coming-of-Age Drama For Majoritarianism and Authoritarianism

Human rights and inclusiveness have both been steamrolled in the first year of Modi's second government. 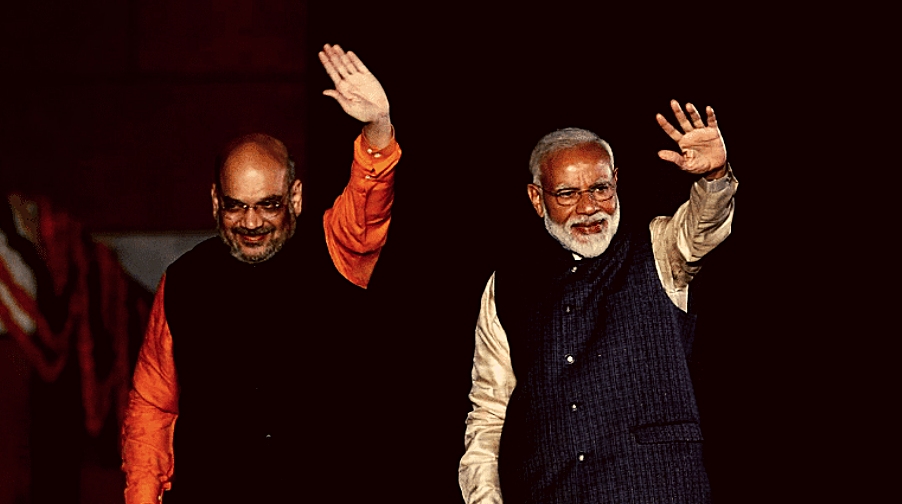 Modi and Shah, after winning the Lok Sabha polls in 2019. Photo: Reuters

New Delhi: In terms of political thrust, Narendra Modi’s second term as prime minister has unfolded like a coming-of-age drama. The aversion towards India’s minorities and the niceties of liberal democracy, already discernible in his first tenure, appear to be getting governmental approval in the first year of his second tenure.

On Saturday, Modi completes one year in office since re-election and a six-year uninterrupted stint as India’s top most executive – a position from which he has wielded power with an iron fist. Through this period, his government has cemented itself as the most illiberal dispensation in the history of independent India.

Two broad trends, which could potentially change the fundamental structure of Indian democracy, mark the beginning of his second prime ministerial tenure.

Modi’s campaign was a political experiment which attained unprecedented success in 2014. He nosedived into a populist style of campaign that aimed to consolidate India’s Hindu majority at the cost of Indian Muslims.

His trusted aide Amit Shah, a hardline Hindutva leader, was given the task as the Bharatiya Janata Party’s national president, to recondition the saffron party on visibly extremist lines.

The duo polarised the electorate and created such a culture of permissiveness that majoritarian communal venom spilled on to the streets. Multiple Muslim men across the northern cow-belt were lynched by Hindu right-wing goons. The so-called fringe had never enjoyed such impunity in India. BJP leaders campaigned against beef-eating nationally; their governments passed laws against cow-slaughter – all aimed against Muslims – despite the fact that sizeable sections of other communities ate cattle meat.

Yet, the BJP leadership could dismiss these brutal murders of Muslim men as rogue incidents, and lampooned any attempt by the opposition to sully the Modi government’s image as a government committed to the idea of “sabka saath, sabka vikas”.

Things, however, changed dramatically last May when Modi secured an unprecedented majority in the Lok Sabha elections. India has, since then, seen the institutionalisation of that communal venom, so much so that it has significantly altered the Muslim citizen’s relationship with the Indian state.

If the demonisation of Muslims had been the highlight of Modi’s first regime, Modi’s second term further formalised it with Amit Shah promoted to Union home minister now.

As if on steroids, the government passed a slew of legislations that undermine the status of Muslims as equal Indian citizens.

First, came its efforts to criminalise the practice of instant triple talaq. None of the political parties in India approved the practice, which the Supreme Court had itself invalidated, but believed making the pronouncement of  ‘talaq, talaq, talaq’ a criminal act would be exclusionary and discriminatory as there is no law to protect women of other religions who are abandoned by their husbands.

Politically, this direct attack on Muslim identity and citizenship enabled the Modi government to move much closer towards the Sangh parivar’s long-time agenda of implementing a Uniform Civil Code with an intentional majoritarian bent.

Then, the Modi dispensation rendered Article 370 defunct through a government order – a clear case of constitutional overreach. The order flowed directly from the sangh parivar’s historic aversion to a Muslim-majority state enjoying autonomy under the constitution, never mind that this was the product of a carefully crafted political-legal arrangement into which the Indian Union consciously entered.

The Supreme Court’s judgment in November 2019 sanctioning the construction of a Ram temple in Ayodhya may have put an end to a long-running dispute, as Modi has claimed in his ‘letter’ on Saturday.

The apex court accepted that the mosque which stood on the disputed land was demolished illegally  but still deemed it fit to hand over the premises to the Hindutva organisations who were behind the crime. The judgment offered the Modi government a chance to remain in everlasting limelight as the apex court handed it the power to oversee the construction of a temple at Ayodhya.

Against this backdrop, the Modi government inflicted its most savage strike on the dignity of Indian Muslims. The Citizenship (Amendment) Act (CAA), which introduced religion for the first time as a criterion for acquiring Indian citizenship and barred Muslim refugees, upended the Indian Republic’s core values of liberty and equality. The constitution prohibits any discrimination between peopke on the basis of caste, creed, religion, or colour. But the CAA, which allowed fast-tracking of citizenship only for non-Muslim refugees, sent out a clear political message that the ruling party and government regarded Indian Muslims as second-class citizens.

For as long as the Sangh parivar or its political wing, the BJP, have existed, it has attempted to alienate Muslims from the Indian social milieu on the basis that they are less Indian than Hindus and followers of other ‘Indic’ religions. The Modi government had now fulfilled a part of that agenda by surreptitiously bringing in this discriminatory legislation.

When a large section of proud Muslim men and women took to streets to protest the law, prominent BJP leaders used this as an opportunity to polarise the electorate even further. They brought out pro-CAA rallies across India, raised slogans that branded Muslims as traitors, and used the police machinery to crackdown on peaceful protestors.

The tense political environment eventually led to communal violence in the national capital, Delhi, in February 2020. Over 50 men, women, and children were killed, most of them Muslim. Beyond the killings, Muslim properties were destroyed with an intention to cripple them economically.

India had barely recovered from this damage when the coronavirus pandemic hit the country. The Hindutva ecosystem, which now enjoys unprecedented political patronage, went ahead  and  communalised the epidemic. Burying all reason and rationality deep, the BJP IT cell and its leaders led a vicious campaign to portray the Tablighi Jamaat cluster – and Indian Muslims as a whole – as the only reason coronavirus infections spread in India. Muslims, as a result, faced insults and shameful discrimination in public life.

Also read: Madhya Pradesh Police Apologise for Beating Lawyer, ‘We Thought You Were Muslim,’ They Say

Even as Muslims protested against the CAA, and faced an assault in multiple riots, none in the Union government thought it fit to engage them directly, or address their concerns. Instead, Muslims were reduced to being merely security subjects.

It wasn’t any minister but the national security advisor to the prime minister, Ajit Doval, who visited the  violence affected  areas in northeast Delhi and attempted to address the worries of victims. Similarly, although the Tablighi Jamaat leaders had been persistently saying that they were ready to cooperate with the authorities in tracing all those who had possibly come into contact with COVID-19 patients at its premises, Doval was portrayed by the big media as having played an important role in getting the TJ leadership to yield to the requests of Delhi police.

The first instrument used by Modi 1.0 to polarise Indians on the lines of ‘nationalism versus sedition’ was to crack down on students of Jawaharlal Nehru University. Terms like “anti-national”, “tukde-tukde gang” and “presstitute” were manufactured to advance the debate that directly benefited his party.

In its second term, the Modi government seems to have sharpened that weapon further in order to expand the level of polarisation in Indian politics.

Amit Shah, the home minister known for his extremist image, has been the most visible face of Modi 2.0. In August, 2019, he introduced an amendment to the Unlawful Activities (Prevention) Act to allow the state to designate someone as a “terrorist” without trial. The bill was eventually passed in both the houses with even the largest opposition party Congress supporting the move.

Even without this amendment, the security agencies had been freely invoking the UAPA against prominent advocates of civil liberties such as those accused of the ‘Bhima Koregaon’ case. But with Shah’s evident blessing the law is now being freely used against others such as the Assam peasant leader and CAA critic Akhil Gogoi, journalists from Kashmir and students from Jamia Millia Islamia and JNU who protested against CAA. The message is clear: the Modi government will not tolerate dissent.

In the Delhi violence case, the arrests of only those who protested against CAA, and not a single one who openly provoked Hindutva mobs to attack Muslims, including the former BJP legislator Kapil Mishra, is a clear indication of the Modi government’s discriminatory approach.

While Muslim dissenters have borne the brunt of the crackdown on dissent, others too haven’t been spared. The arrest of Devangana Kalita and Natasha Narwal, both founders of Pinjra Tod women’s movement which participated actively in the anti-CAA movement, is another instance which shows that the Modi government is driven in equal measure by impulses that are majoritarian and authoritarian.