The Centre Cannot Get Away With Ignoring Migrant Workers Completely

Indian middle classes have been oscillating between seeing the migrants as miscreants who can possibly create a civic crisis and being concerned about them, and not approving of their treatment. 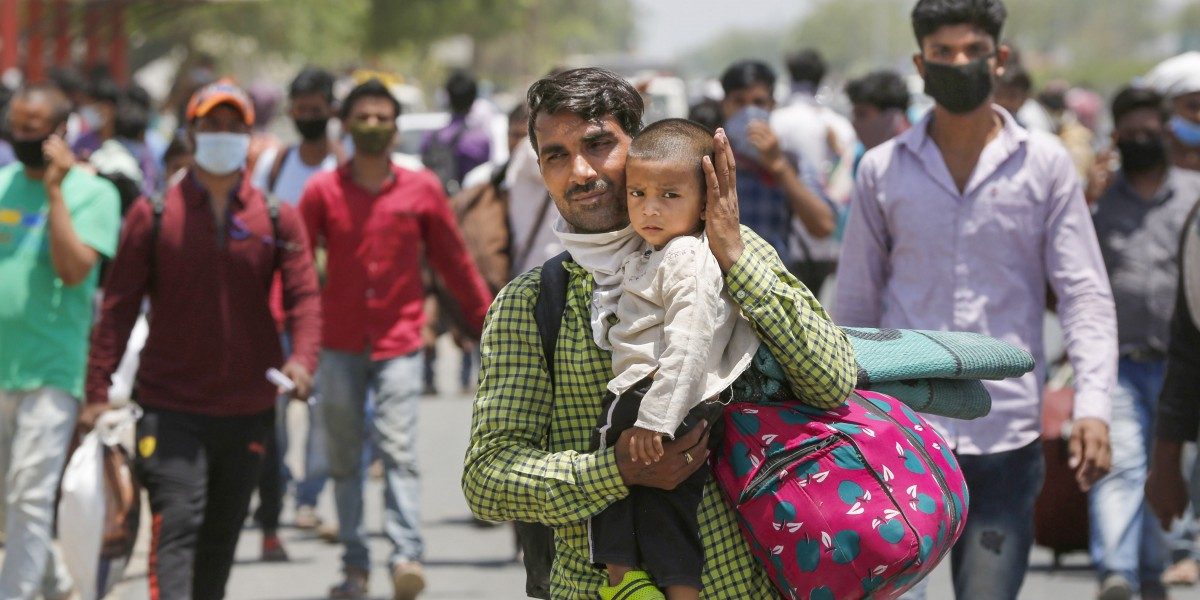 Cultural sociologist Zygmut Bauman once remarked that we fear the refugees, in our case the migrants, because they remind us where we could be. It could well be our future. It enlarges class anxieties and loss of privileges and what life could mean without basic security.

The current political regime is playing up this hidden anxiety in wilfully neglecting the migrants and turning their everyday existence into a low-key spectacle. The uncertainty of getting the next meal, where to spend the night, far removed from friends and family and without anybody to turn to.

The migrant crisis is ugly but real, and Narendra Modi’s government is doing everything possible to keep them that way. It also demonstrates the contempt that this regime has for the weak of any kind. Their hatred for the Muslims is only a part of that contemptuous dislike. It also reeks of rampant insecurity of keeping the weak perpetually vulnerable lest they organize themselves, find a voice and demand a dignified life.

The way the migrant issue has been dealt by Modi government, and not treated it as a matter of policy priority, reflects the core of majoritarian philosophy – a deep-seated scorn and even deeper inability to empathise with anything. Empathy is seen as weakness, contempt as an elementary need to survive. The RSS, which claims to do humanitarian activity, does it more as optics than conviction. It is this very contempt that gets reflected in the violence that we witness during the riots, which again provide a cover to justify the macabre hatred.

In a functional democracy like India, it should interest us to understand how different sections of society responded to the spectacle of migrants walking home.

Migrants themselves have remained more or less peaceful, even if they are restless and desperate. Economist Jean Drèze, in a recent interview, asked why the migrants did not organise food riots or why food riots do not take place in India. It is a relevant question. In much of Europe and North America, a situation of this kind of desperation, especially with marginalised communities, results in arson, loot and rioting. Not in India. The reason is linked to self-identity and the continued connection to agriculture. Most migrants continue to hold small land holdings and agriculture continues to work as a backup to distress.

Most migrants have been saying if they get back, they will not die of hunger. They can manage food and want to be with family. Land is a major source against hunger deaths, in spite of sustained agrarian crises. Further, territorial and regional identities, while making them migrants in one state, offer them a sense of belonging in another. They ‘belong’ to a region, have long histories and memories connected with those unwritten histories, they carry with them the moral obligation of their ancestral past, even if much of that was about squalor and distress.

Indian middle classes have been oscillating between seeing the migrants as miscreants who can possibly create a civic crisis and being concerned about them, and not approving of their treatment. Partly, the class divide that exists in much of Europe and North America does not reproduce itself in India due to large swathes of unorganised labour being part of middle-class activities of engaging electricians, plumbers, house helps, cooks and so on.

In Europe and North America only the super rich afford these privileges, in India most middle class lives are inextricably tied to them. They see and meet them on everyday basis. It is difficult to erase the humanness associated with their existence, the way much of rural India is gradually erased from public memory as a new generation of urban dwellers has lost contact with their rural beginnings. Rural distress and increased rates of suicides did not bring a sustained urban response, but it is different with the question of the migrants.

Neoliberalism and Hindutva precisely merge in creating the necessary facelessness and force required to convert them into ‘surplus populations’. However, in democracies this convergence has to pass through the prism of consent and public morality. Narendra Modi’s unabashed display of indifference comes from the politics he has been groomed into but society at large has not yet fully approved of this, even if some part of it is admired in the context of religious minorities.

Response to a mass crisis of this kind is often not based on an understanding of the issue but in its more simplified moral framing. Here the morality of the Right is at variance with ethics of the majority. They might share the insecurity and anxiety of the Right but not necessarily the apathy and contempt. The challenge for the Right is to fructify it into a more fossilised kind of violent indifference as a legitimate ‘moral sentiment’, while the majority will, knowingly or unknowingly, struggle to protect their everyday religious and social ethics of concern and compassion. It is here that the Right will be in conflict with the majority of society and be differentiated and isolated from the dominant sentiment. It managed to get approval with similar treatment of Muslims but doesn’t seem to succeed with the question of the migrants.

The migrant crisis, therefore, also has important lessons for religious minorities and other persecuted populations. The politics they pursue needs to pass through the prism of public morality. This will mean looking for clues as to how to enlarge the ‘circle of concern’ to include religious minorities the way it includes the question of migrants today.

If a society can build pressure to take care of its migrant populations, it should not be impossible to generate similar compassion for minorities. A new collective identity needs to replace the Hindu-Muslim binary and renewed Muslim politics which will need to speak to the majority and not to an already-converted secular minority.