Over 70 organisations and 50 individuals have written to the president and prime minister in support of the Niyamgiri Suraksha Samiti, a collective of tribes that opposes bauxite mining by Vedanta in Niyamgiri hills. 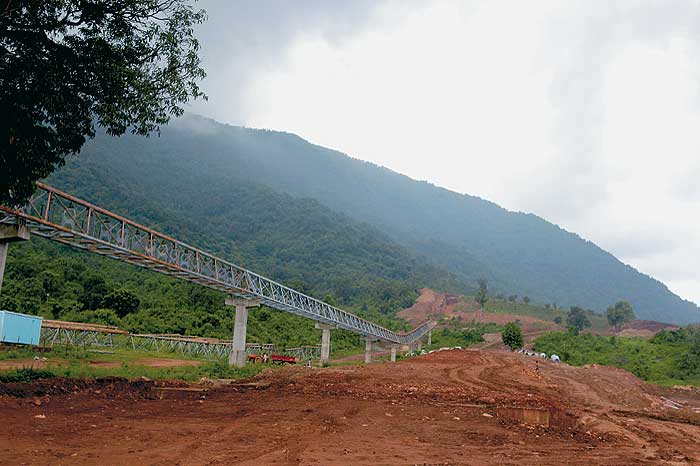 The proposed mining site at the Niyamgiri hills. Credit: PTI

New Delhi: Environmental activists from across India have written to the president and prime minister condemning the Union home ministry’s decision to link the Odisha-based Niyamgiri Suraksha Samiti (NSS) to Maoists.

The ministry in its latest annual report wrote, “In Niyamgiri Hills area (Districts Rayagada and Kalahandi, Odisha), the outfit [the Maoists] continued to guide the activities of the Niyamgiri Suraksha Samiti”.

However, environmental activists from across the country say the charges are baseless. NSS is a collective of tribes that has been opposing bauxite mining by Vedanta in Niyamgiri hills since 2003. Niyamgiri hills are home to about 8,000 Dongaria Kondh tribes living in 160 villages.

“Ministry’s report is a lie, we strongly condemn it,” said Lingraj Azad, organiser of NSS. “The Samiti has been fighting for the protection of rights of Niyamgiri tribals much before Maoists activities started occurring in the region? Under the pressure of the corporates, the governments are labelling us as Maoists to weaken us”.

“The continued targeting of the Dongria Kondh community in reports like these (and in continued state actions on the ground) raises serious doubts: Is this being purposely done to break their continued resolve to oppose the mining of the Niyamgiri hills, and fragment their movement?” the letter to the president and prime minister said.

The letter, signed by over 70 organisations and 50 individuals, has been drafted by environmental activist Ashish Kothari, of the Pune-based non-profit Kalpvriksha. “We’ve been visiting the area for some time now to study some aspects of the movement and also supporting the movement,” said Kothari. “Their entire agitation has always been non-violent.”

In 2013, the Supreme Court ruled that Vedanta’s bauxite mining project could continue only if it had the consent of the gram sabhas (village councils) in Niyamgiri hills. The Odisha government identified 12 villages that would be directly impacted by the open-pit mining. In the same year, all the 12 villages unanimously said ‘no’ to the project.

In 2016, the Supreme Court trashed a petition by the Odisha Mining Corporation (OMC) to hold fresh gram sabha consultations to allow bauxite mining in Niyamgiri hills.

Azad said that gram sabhas that rejected the mining project did so in the presence of the district judge and a huge police force. “Two sarpanchs (village heads) in Raigada and one in Kalahandi have been elected under the banner of NSS, the process of election was supervised by the Election Commission of India. How can someone say that the Samiti is linked to Maoists?”

The letter also detailed incidents of violence and intimidation against members of the Dongria Kondh community by security personnel.

“In the last 2-3 years, several Dongria Kondh youth and elders have been arrested, harassed, and killed, and one has committed suicide after repeated harassment and alleged torture by security forces. In none of these cases, have the forces been able to produce evidence linking them to so-called Maoists. One young adivasi was charged with arson, murder, attacking security forces, etc, and with absconding … the last one a blatantly false claim given that he was picked up from the main market of Muniguda town!”

Besides branding the NSS a Maoist organisation in its annual report, the home ministry has also labelled Jharkhand’s Visthapan Virodhi Jan Vikas Andolan (VVJVM) “a front of the CPI (Maoist)”. The VVJVM has been working for the rights of displaced farmers in the state.

“Similarly in Jharkhand the Visthapan Virodhi Jan Vikas Andolan a front of the CPI (Maoist), tried to take up pro-tribal issues and opposed amendments to the Chhotanagpur and Santhal Pargana Tenancy Acts, modifications in Domicile Policy etc.,” the ministry’s report said.

The activists’ letter to the president says, “The government should also pay heed to the wisdom of the Supreme Court expressed in the case of Nandini Sundar and Ors vs The State of Chhattisgarh (2007), also referred to as the Salwa Judum judgment. In this the court reiterated that the current social order which treats any person speaking for human rights and questions the current paradigm of the state, as a Maoist or a Maoist sympathiser, has become a serious problem affecting our nation and that any peaceful dissent or dissatisfaction which is a positive feature of democracy, is often not recognised by the authorities and is met with severe repression.”

When asked for clarification about apparent link between the NSS, VVJM and Maoists, Sudhir Saxena, joint secretary (internal security) in the ministry, said, “The information comes from different sources; I would not be able to tell you, as I do not deal in this”. Other departments in the ministry had similar responses.