How does GoI's failure to pay affect the everyday lives of those whom it is cheating? 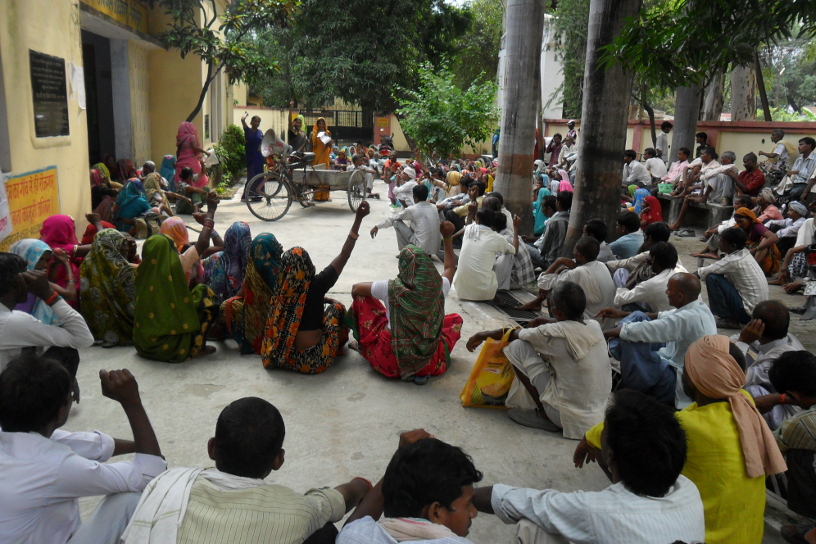 Reproduced below is the text of the demand issued by Concerned Citizens and Friends of Sangtin Kisaan Mazdoor Sangathan, Sitapur, Uttar Pradesh.

The Government of India (GoI) has failed to pay the wages of thousands upon thousands of rural labourers across the villages of India who have worked under the Mahatma Gandhi National Rural Employment Guarantee Act (MGNREGA).  MGNREGA aims to enhance the livelihood security of households in rural areas of the country by providing at least 100 days of guaranteed wage employment in every financial year to every household whose adult members volunteer to do unskilled manual work. Wages are to be paid weekly. In Sitapur district of Uttar Pradesh alone, the GoI owes more than Rs 30 crore in payment for the work done over the last five months. Births, weddings, illnesses and deaths have greeted and tested the households of peasants and labourers, and angry and violated people have enacted one protest after another at the offices of district magistrates and development officers to try to get the government to respond to this injustice, but to no avail. This is outrageous!

How does GoI’s failure to pay affect the everyday lives of those whom it is cheating? Here are some glimpses from Sitapur:

On October 29, one day before Diwali, Bitoli, a mazdoor saathi of Sangtin Kisaan Mazdoor Sangathan, was moved by desperation to pawn three pairs of brand new toe-rings (bichhiya) owned by her youngest daughter-in-law. After pawning her own anklet (paayal) for Rs 500 and her older daughter-in-law’s earrings for Rs 700 in previous weeks, the toe-rings were the only remaining items of monetary value in Bitoli’s family and she was hoping to get Rs 300 so that her family could at least have one celebratory meal to mark the festival. In Bitoli’s family, seven people have worked under MGNREGA and the GoI owes them Rs 22,000.

Similar stories abound. In Allipur village, Surendra pawned his bicycle for Rs 200. Rekha of Makdera pawned her anklets for Rs 300 while Ram Kishore of Faridpur had to pawn his wife’s silver chain – which cost them Rs 1200 – for only Rs 500.  As these people await payments from the government, chances are that many of them will not be able to retrieve these items because of the excessively steep interest rates. After the wheat is sown, the winter will become another battle and it will be impossible for them to regain their pawned valuables that they fall back on in times of grave crises.

Pawning is not the only site of exploitation. When one mazdoor saathi could not find a buyer for her kharif crop, she went to sell 20 kilogrammes of sesame seeds to a shopkeeper in another village so that she could find some money to prepare for the sowing of wheat. The shopkeeper did not have the money to buy it, so she travelled to another shop three kilometres away. This shopkeeper agreed to buy the sesame seeds at the rate of Rs 4000 per quintal if she agreed to receive the payment at a later date. Last year, the same saathi sold her sesame seeds at Rs 7000 a quintal. With no money in her hands still, this saathi is in deep agony. The sowing of mustard on her farm is already delayed. Her granddaughter’s wedding is about to happen. She feels helpless as all options seem to disappear.

MGNREGA workers had expected the administration to make at least some payments in August during the festival season. But Eid, Raksha Bandhan and Diwali have all come and gone and the homes and villages remain unmarked by festivities. Many homes could not be white-washed; the pooris, kachoris and desserts that are cooked only on festivals remained unrealised temptations for many; and dozens of people who had been waiting for a festival as an excuse to get a long overdue item of new clothing or footwear had to postpone the idea.

As fields are getting ready in Sitapur for the winter wheat crop, peasants and farmworkers are scurrying to find ways to borrow money. During the last several years, the arrival of MGNREGA had significantly reduced the terror of traders who lend money on interest. While MGNREGA had brought the monthly interest rate down from 10% to 5% in some villages, the non-payment of MGNREGA wages has allowed loan sharks to increase rates back to 10%.

Who is to blame for this mess? In Uttar Pradesh, the state government, who employed the labourers, claims that the GoI is not giving it the money to make payments. Yet, it has managed to pay the officers and staff associated with MGNREGA while the most vulnerable people who have actually sweated for the state are being cheated out of their earnings. In fact, these delays appear to be  a systemtic part of the administration’s strategy of budget cuts in social welfare schemes. How ironic that the two political parties in power, Samajwadi Party and Bharatiya Janata Party, who never tire of making claims in the name of the poor, are participating in this complete mockery of the rural poor.

As thousands of saathis from Sitapur District prepare to march against this gross violation of their rights, we demand immediate and full payment to all the labourers of MGNREGA.