BJP Has Demolished Constitution, Wants to Replace it With Own Manifesto: Mehbooba Mufti

The PDP chief said the BJP-led government had nothing to show and rake up except for Kashmir and Article 370 to seek votes. 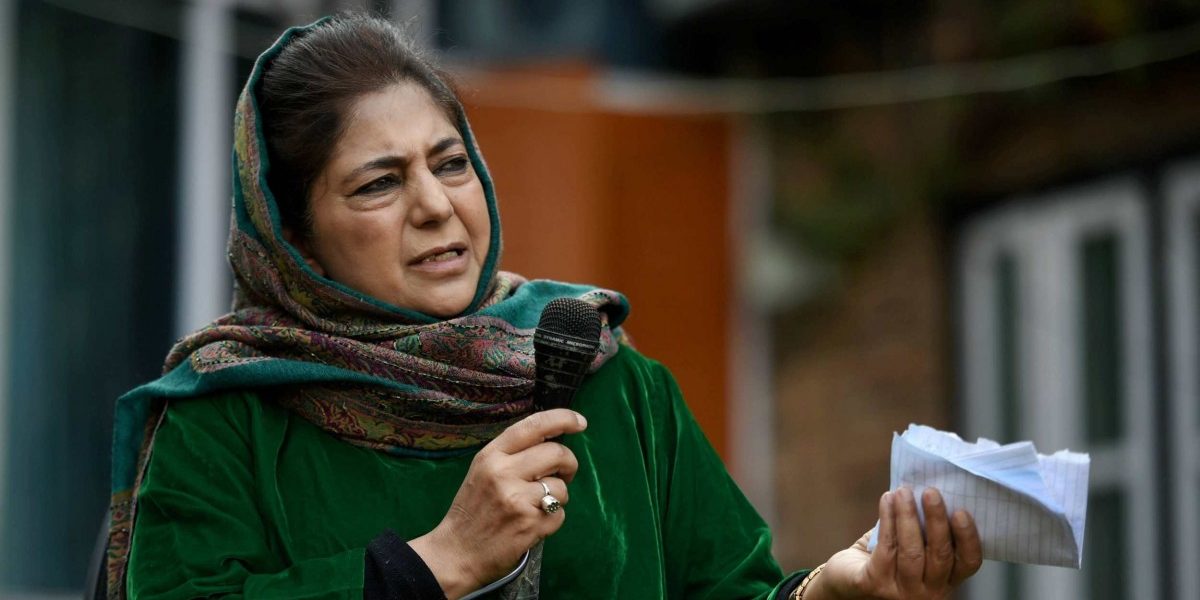 Srinagar: People’s Democratic Party president Mehbooba Mufti on Friday hit out at the BJP, saying the party has “demolished” the country’s Constitution and wants to replace it with its manifesto.

In her first media interaction in over 14 months after the dilution of Article 370 in August last year and her subsequent detention, she said the opposition parties in the country, except a few, went silent on the issue thinking this happened in Kashmir and not with them.

“But then, the BJP demolished the same Constitution, the BJP passed the Citizenship Amendment Act and polarised the people. Then made an anti-farmer law and now, I think they will steal the rights of the downtrodden communities like Dalits,” she said.

“They want to replace the country’s Constitution with the BJP’s manifesto, but this will not work. So many people like Pharaoh and Hitler came, but this dictatorship will not work,” the former chief minister said.

Mehbooba said the BJP does not want the people of Jammu and Kashmir and is only after its “territory”.

“The people of Jammu and Kashmir are expendable for them, what they want is the territory. They had this territory rightfully till August 5, 2019, but then they broke a relation by virtue of which we had entered into an accession with them,” she said.

Mehbooba lashed out at the BJP for desecrating the Constitution and “looting” the dignity of the people by revoking its special status. “We had acceded to a liberal, democratic, secular India. Let me tell them we are not comfortable, we are incompatible with today’s India where minorities and Dalits are not safe and where they tried to disrespect us by looting our dignity. They will have to think, if not today, then tomorrow, that this country will run on India’s Constitution and not on the BJP’s manifesto,” she said.

The PDP chief said the BJP-led government had nothing to show and rake up except for Kashmir and Article 370 to seek votes.

“PM Modi had to talk about Article 370 today to seek votes. We should understand that this government has failed to address the issues of the country, be it economy, employment or anything else. When they fail in these issues, they are flogging minorities, they are flogging Kashmir.

“They have demonised Kashmiris, Muslims and even Dalits for that matter in the media and when they fail at anything, they remember Kashmir and Article 370,” she alleged.

When asked whether the PDP was responsible for giving power to the BJP by way of an alliance with them after the 2014 Lok Sabha polls, she said Jammu and Kashmir’s special status was not revoked by the assembly or the Jammu and Kashmir government, but Parliament.

“If there has to be a regret, it should be that we kept our faith and trust in a PM of the same party to which (former PM A.B.) Vajpayee belonged to. We trusted that he will not desecrate the Constitution. Who knew he will do that when he had the brute majority. But unfortunately, he misused the Constitution and looted something over which they had no right,” Mufti alleged.

She said the fight for the restoration of J-K’s special status would continue by using all peaceful means necessary.

“Our people should not get discouraged, nothing is impossible. Not only what was taken away from us will be returned to us, but also God willing, they will come to our feet and ask Kashmiris what else do they want. This is a political fight which we will fight in a peaceful manner and I want people’s support,” Mufti said.

Asked whether separatist leader Syed Ali Shah Geelani’s refusal to meet members of the all-party delegation in 2016 after months of violence in the wake of killing of militant commander Burhan Wani, she said it was a loss of the people of Jammu and Kashmir.

Mufti refused to answer who had come to meet her while she was under detention.

“Some things are left unsaid, but need to be understood,” she said.

“There is nothing to guess about it,” Mufti said in her reply to a question whether she was asked to sign a bond to not speak about Article 370 if she was released.

Asked about National Conference president Farooq Abdullah’s remarks on China, she said it was a reality that China was talking about India’s “unilateral decision” of abrogation of Article 370 provisions.

“It is a reality that China has grabbed 1,000 km of Indian territory out of which they have returned only about 40 km after India pleaded them. It is also a reality that China is talking about Article 370, saying this is disputed and why have you done this unilaterally.

“So, you cannot deny it, it is a fact. The fact is that Jammu and Kashmir had never come into such an international view before abrogation of Article 370. These are all realities and you cannot deny them,” she said.

Mufti also expressed gratitude to the NC chief and other leaders.

“In August last year, when we had apprehensions that something was going to happen, I requested Farooq sahib as he is our tallest leader here to call an all-party meet. We met and came out with Gupkar declaration,” she said.

Mufti also saluted IAS officer Kannan Gopinathan who quit the elite service last year “over denial of freedom to the people of J-K”.