The banners were put up by a little-known political group headed by Amit Jani, who had threatened to kill Kanhaiya Kumar last year. 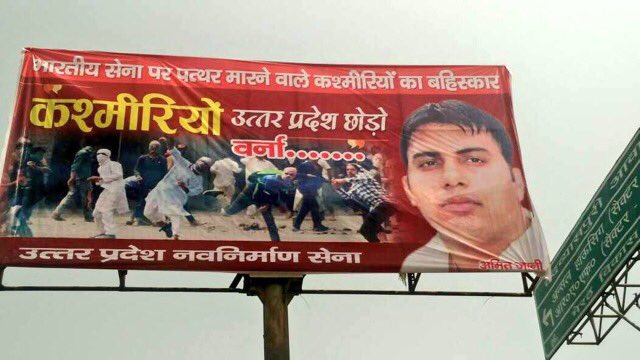 The banners have been placed along the Delhi-Dehradun highway. Credit: Twitter

Meerut: Banners calling for a boycott of Kashmiris and asking people from the Valley to leave Uttar Pradesh have come up in the district after reports of stone pelting on security forces in Kashmir.

The banners have been put up by a little-known outfit, Uttar Pradesh Nav Nirman Sena. Its chief Amit Jani said that they have put up these banners and hoardings along the Partapur bypass outside the colleges where Kashmiri students study.

Police said that action will be taken against those putting up such hoardings. According to the Hindustan Times, the police registered an FIR Jani for spreading communal hatred and said that he will be arrested soon.

But the outfit said it is only the first step and it will launch a “halla bol” campaign beginning April 30 to “banish” the Kashmiris who do not leave the state on their own.

Jani made it to the news last year when he threatened to kill JNU student leader Kanhaiya Kumar.