Maratha Protests in Maharashtra are Silent but Could Explode Anytime

The immediate trigger is a rape of a Maratha girl, but the community has many other demands and grievances 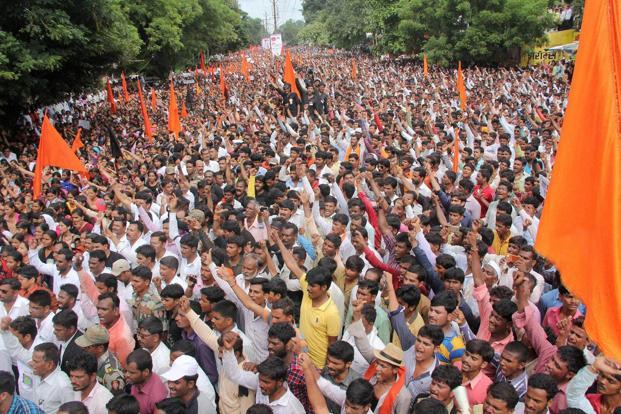 File picture of a rally of Marathas in Parbhani in Maharashtra. Credit: PTI

The state of Maharashtra is not alien to protest marches or political movements. Over the years, it has witnessed some of the most historic demonstrations. When the state government in 1989 censored Babasaheb Ambedkar’s Riddles of Ram and Krishna, Dalits poured into the streets to mark their disapproval. Muslims had come out in the streets in their thousands to demand the ban on Salman Rushdie’s Satanic Verses.

However, the consistent mammoth protests of Marathas over the past two months overshadow the ones experienced by the state in the past. Lakhs of Marathas have been thronging the streets and participating in silent protests and this is something I have not seen in my last 35 years in journalism. The movement has not only shaken the political leadership and the government, but has also made OBCs and Dalits anxious. After all, Marathas are the most influential community in Maharashtra accounting for 32% of the state’s population – including Kunbi – which is why observers are watching these protests and the outcome with baited breath.

Two months ago, a Maratha girl was brutally raped and murdered, allegedly by three Dalit youngsters in Ahmadnagar’s Kopardi village, which triggered the initial sentiment of abolishing the Scheduled Caste and Tribes (Prevention of Atrocities) Act 1989 formulated to protect discrimination against SCs and STs. The demand to abolish this Act is not new. Non-Dalits have been resentful of it from the time of its conception and have also alleged the act is being misused. But Ahmadnagar has been infamous for atrocities against Dalits. It is ruled by Marathas, who are often the perpetrators of horrific caste crimes witnessed by the district.

Following the rape in Kopardi, Maratha leaders and activists found a reason to reverse the history that shows them in uncomplimentary light, and intensify their demand to do away with the Act. However, with severe opposition from Dalit groups, the demand was later amended to regulating its misuse. Sharad Pawar, whose NCP is supposed to be the champion of Maratha community, backed this demand. Commentators believe a section of Marathas are using this issue are reflecting their prejudices and hatred for Dalits. Dalit leader and grandson of Babasaheb Ambedkar, Prakash Ambedkar has appealed to Dalit groups to avoid retaliatory protests, which has so far kept the caste tension and conflict at bay.

But Kopardi and the Atrocitities Act are not the only issues here. The sheer quantum of the protests across the state evidently highlights the grouse the Maratha community has lived with for the past two and half decades. Economic liberalization intensified the problems of most of the deprived groups. Marathas are no exception. The paucity of jobs and the burgening agrarian crisis have affected the community over the years. For the record, most of the farmers who have committed suicide in Maharashtra are Marathas. While the rich Marathas grabbed political representation or power in the cooperative sector, they did little to emancipate the deprived sections of their own community. It is believed that the much-vaunted power of Marathas is concentrated in just 240 dominant families. Therefore, these protests also reflect the undercurrent of a conflict simmering within the community, which has revived its demand for reservations.

The previous Congress-NCP government, with an eye on the elections, had formed a committee led by Narayan Rane and had declared 16% reservation to the Marathas, which was stayed by the Bombay High Court. The BJP government, which took over the state’s administration in October 2014, appealed in the Supreme Court but the bench refused to interfere. However, the moot question is whether the reservation would be stand alone, which would mean increasing the cap like the Tamil Nadu government did, or would it eat into the share of the OBCs.

The former process would require a constitutional change, which is complicated and time consuming. But the latter option of including Marathas among the OBCs, which is technically the preferred option of those participating in the current endemic protests, defies logic. It is vehemently opposed by, obviously the OBCs, but also the Kunbis, a deprived sub-section within the Marathas, which is already included in the reservation quotas. Kunbis and Marathas have always been at loggerheads with each other, with upper caste Marathas treating Kunbis in a discriminatory manner in some regions like Konkan.

The Marathas, a community, which has always enjoyed the hierarchical benefits of Maharashtra’s feudal social structure cannot possibly be called “backward”. But the Maratha youth, which is at the centre of the movement, believes that even though political and economic power lies with the Marathas, the community leaders never addressed their issue of unemployment, while Dalits, OBCs and Tribals, using their quotas overtook them. The Patel agitation witnessed in Gujarat or the Jat agitation of Haryana is eerily similar to the one bubbling in Maharashtra. The only difference is the protests here have not turned violent which because of the restraint showed by the protestors and comes as a relief.

When any state experiences protests of this intensity the state government is forced to sit up and take note. Chief minister Devendra Fadnavis, while indicating his broad support for major demands, invited the protestors for discussion. But they declined. Protestors may not have taken an explicit anti-government stand, but the fact that Fadnavis is a Brahmin and his government does not represent “us” is strong a sentiment among the protestors, which cannot be denied.

Maharashtra has long had a tradition of anti-Brahmin movements, which were led by Maratha stalwarts like Keshavrao Jedhe, Dinkarrao Jawalkar etc. Fadnavis becoming the chief minister has hurt Maratha sentiment-that Maratha ministers have to take orders from a Brahmin is something the community has found hard to digest.

Another reason why a rational debate between the government and protestors is unlikely is the nature of the marches. It does not have a face, a leader that the government can talk to. It is similar to a Kumbh Mela, something that was said of Anna Hazare’s Jantar Mantar agitation as well. It includes people across age groups – though it is dominated by youngsters – includes men and women and cuts across all ideologies, progressive and radical within the Marathas. With the Sambhaji Brigade and Maratha Mahasangh being at the core of it, the RSS has also infiltrated the agitation, with the Congress, NCP and the Shiv Sena making an occasional guest appearance. The presence of some of the BJP leaders also suggests that the government is hedging its bets. The leaders of progressive and conservative movements in Maharashtra are also trying to influence the movement.

Which is why, as the agitation intensifies, it’s eventual climax become even more intriguing. By the time the march comes to Mumbai in October, there would have been more than 25 of them, each one an enormous congregation by any benchmark. Organizers have said the march in Mumbai would see a crowd of 50 lakhs. While the leaderless agitation bears the possibility of fizzling out after the show of strength, it could take an ominous communal turn. Some Brahmin and Muslim organizations have extended their support, with anti-Dalit overtones. If it gets violent, it could damage the social fabric of the state to an irreparable extent with two of the most populous communities at loggerheads with each other. The third possibility is that political leaders could hijack the agitation and use the cadres for the next assembly elections.

The genuine demands, especially economic ones, of poorer sections of Marathas remain neglected. Now the entire agitation has got entangled in caste and identity issues and this could create a political storm int the state.

Nikhil Wagle is a senior Mumbai-based journalist and commentator