In her widely televised Trinamool Congress Martyrs' Day speech, the Bengal chief minister made the BJP the central focus of her address. Conspicuously missing were the issues of unemployment and corruption. 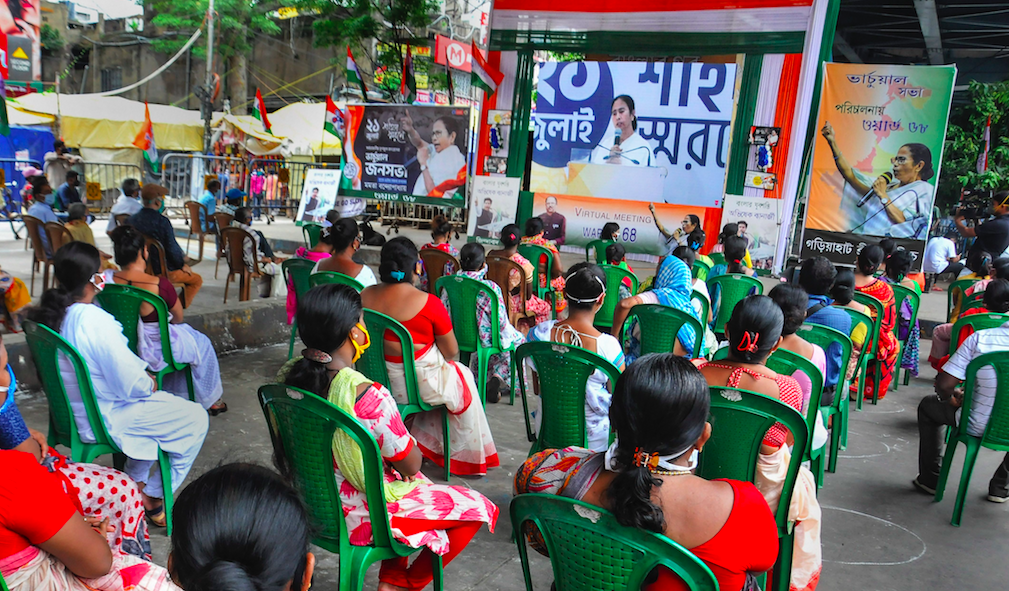 Kolkata: West Bengal chief minister and Trinamool Congress (TMC) head Mamata Banerjee on Tuesday sounded the poll bugle for the 2021 Assembly elections, in which she will be seeking a third term at the government, at the party’s annual flagship event of Martyrs’ Day.

Banerjee pegged her government’s success on the social welfare schemes that it has brought for a wide cross-section of people, its protection of people’s rights, and maintenance of law and order and communal harmony. She promised free ration, education, and healthcare as long as she is in power. However, she hardly touched upon the issues that, according to political analysts, pose the greatest challenge for her – employment and corruption.

Banerjee also urged party workers not to be afraid of the Bharatiya Janata Party, without explicitly naming it. “There is no reason to be afraid or worried. We will work as a disciplined team. I am there and so are you. Let’s work together,” she said.

The Martyrs’ Day rally, usually held in central Kolkata, witnesses a largest turnout and has been a routine event for Banerjee to showcase party prowess. This time, the event and her address have had to go online due to the COVID-19 lockdown protocols.

While BJP had launched its 2021 campaign ‘Aar noy Mamata’ at the end of May, the TMC leadership had avoided the topic of elections citing preoccupation with the health crisis and cyclone Amphan. On Tuesday, Banerjee urged party workers to vow to not be afraid, play the brave fighter that they had always been, and proudly announce next year that Bengal will be governed only by the people of Bengal and not ‘outsiders’.

‘Outsiders’ is an obvious reference to BJP that has emerged TMC’s principal opponent since the 2018 panchayat elections. In 2019, they gave Mamata Banerjee a rude blow by claiming 18 of the state’s 42 Lok Sabha seats. The TMC won 22.

During her 70-minute speech, Banerjee targeted the Narendra Modi-led Centre for conspiring against her government and depriving it of its dues, besides harassing and intimidating her party’s leaders.

She criticised BJP for dividing people in the name of Citizenship Amendment Act (CAA) and National Register of Citizens (NRC), for the Delhi riots, for privatisation in the railways, coal and aviation sectors and ‘lawlessness and encounter-Raj’ in Uttar Pradesh. 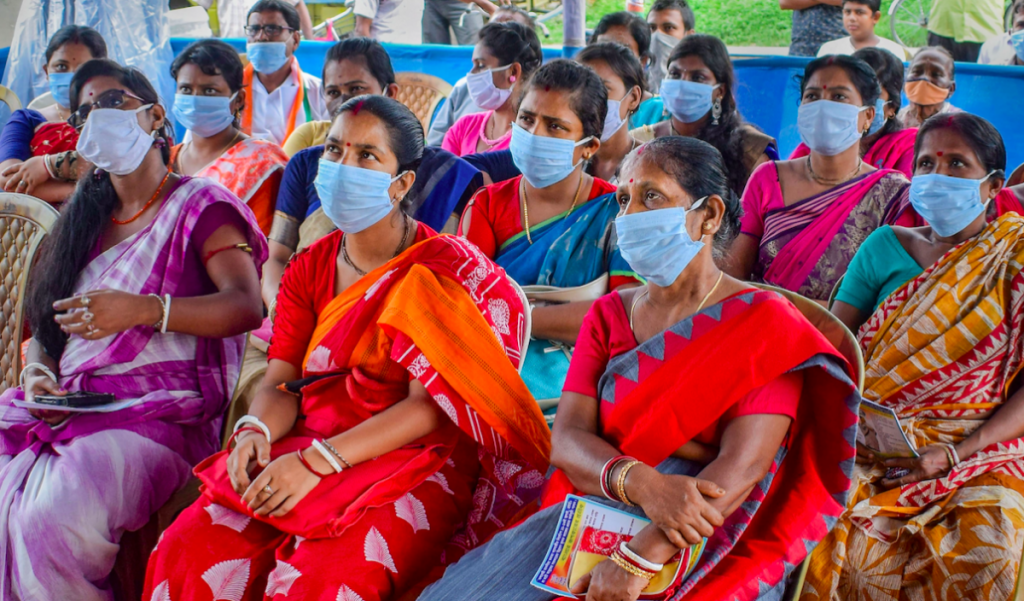 “We have not forgotten the fight against NPR and NRC… how you killed people in Delhi. Don’t think that we will forget NRC, CAA because of (our preoccupation with) COVID-19. The refugees from Bangladesh have all got citizenship here. They are now Indian people. What citizenship are you offering? You are simply pitting one community against the other,” she said, her tone belying no lack of aggression.

She also sought to stoke Bengali pride, highlighting the harmonious coexistence of people in the state under her rule. “We have three slogans that originated from Bengal – ‘Jai Hind’, ‘Bande Mataram’ and ‘Joy Bangla’,” she said.

According to psephologist Biswanath Chakraborty, a professor of political science at Rabindra Bharati University, “She identified BJP and the principal opponent but failed to show any direction for her next term. Further, she seemed worried about an impending poaching drive by BJP.”

Nearly echoing Chakraborty, BJP state unit president Dilip Ghosh said, “Other than delivering empty talks, she made it clear by inviting TMC deserters back into the party’s fold that she is worried. Leaders are no longer in a beeline to join TMC. They are deserting the party,” Ghosh said.

When it came to employment and corruption, Banerjee was distinctly on the backfoot.

“We have generated employment in a different way…by creating jobs. We have the largest number of small-scale industries. I wanted to focus on this aspect more during this term but COVID-19 and cyclone Amphan disrupted my plan. Next time, my focus will be on employment,” she said.

Banerjee has faced frequent criticism for failure to attract any large industrial project during her rule since 2011 and the failure has mostly been attributed to her government’s policy of acquiring no land for private projects. She, however, highlighted the Deocha-Pachami coal mine project, where physical work is yet to begin, as a potential game-changer for Bengal from the perspective of generating employment.

On corruption, which has recently become a talking point across Bengal, she alleged that the media and her opponents were magnifying stray incidents.

“I’m convinced that the threat the TMC government faces come from the lack of employment generation and rampant corruption, and not from communal polarisation,” said political analyst Amal Mukhopadhyay, a former principal of Presidency University.

In 2019, in the immediate aftermath of the Lok Sabha election blow, TMC had identified corruption at the grassroots level as one of the major reasons behind the loss of support, following which Banerjee had played anti-corruption crusader for a few months. However, the recent large-scale corruption in distributing cyclone Amphan relief in TMC’s strongholds of South 24 Parganas, North 24 Parganas and Howrah districts have dented the party’s image.

Udayan Bandyopadhyay, who teaches political science at the Bangabasi College in Kolkata, said, “She spent most of her time highlighting her government’s social welfare projects, about which people already know. She should have given a strong message on corruption, an issue that has kept people anxious and agitated. It is because of corruption that the benefits of her social welfare schemes are not reaching people.”

Communist Party of India (Marxist), a party that led the Bengal government for 34 years but has recorded a declining support base over the past few years, too, targeted the Banerjee government for failure in employment generation.

“It’s ridiculous to hear that her employment generation plan got affected due to the coronavirus. She had 10 years’ time! What employment did she generate in the past nine years? Those who cleared exams in schools and colleges and government offices have not got appointments because of other malpractices of her party,” said Mohammad Salim, a politburo member of CPI(M).

Most of the 1,65,000 comments that her Facebook page drew during the live airing of her speech were requests from the educated youth, seeking her intervention in starting recruitment of teachers. The recruitment process for these have stuttered several times. Gross irregularities in appointment have been challenged in court. Comments also sought her intervention in checking corruption at the grassroots level.

“Respected Didi, the recruitment of teachers has remained stopped for five years… innumerable MA, MSc, B.Ed passouts are suffering from the pain of unemployment. Getting depressed. All our dreams are getting ruined… please issue notification for SSC, SLST before 2021,” Amit Sarkar, a resident of Jalpaiguri in North Bengal, wrote.

Snigdhendu Bhattacharya is a journalist, researcher and writer based in Kolkata.