In Singur, Nandigram and Lalgarh, prominent leaders from the TMC have moved over the BJP. 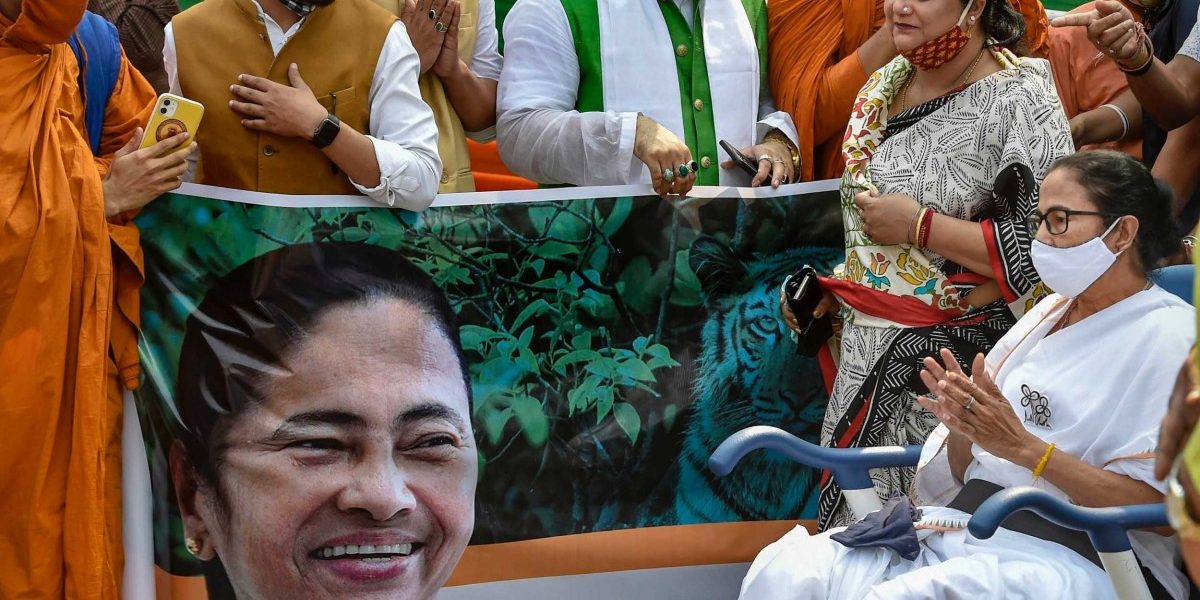 Kolkata: In 2011, Becharam Manna was given the responsibility of ensuring the victory of two-time Singur MLA Rabindranath Bhattacharya for a third term. Manna, the Singur block Trinamool Congress (TMC) president, and Bhattacharya, the party’s local MLA, were the two principal local organisers of the anti-displacement movement in Singur against Tata’s Nano car project during 2006-08. In 2011, besides giving Manna a ticket from the neighbouring constituency of Haripal, Mamata Banerjee also entrusted him with ensuring Bhattacharya’s victory.

Now, Manna is the TMC’s Singur candidate and Bhattacharya is the Bharatiya Janata Party’s.

In 2011, Banerjee entrusted Suvendu Adhikari, the party’s Tamluk MP and Nandigram in-charge, to ensure the victory of the party’s candidate, Feroza Bibi, from the Nandigram constituency. Adhikari had already ensured the victory of Feroza Bibi, mother of an anti-displacement agitator killed in police firing in 2007, in the 2009 by-election. Success had to be repeated in 2011.

Now, Banerjee herself is contesting from Nandigram, with Adhikari as her prime rival and the BJP’s candidate.

In 2011, Banerjee lashed out at Chhatradhar Mahato and dubbed him a Communist Party of India (Marxist) agent after the latter decided to contest from the Jhargram assembly constituency, of which Lalgarh was a part. Mahato, who was Lalgarh’s Maoist-backed mass movement’s public spokesperson, had been in jail since September 2009.

Banerjee was furious with Mahato because his candidature could spoil the TMC’s Jhargram candidate Sukumar Mahato’s chances by splitting the anti-Left Front votes. She was sensing her impending ascent to power, thanks to the strong wind of anti-incumbency against the 34-years Left Front regime, particularly because of the mass movements in Singur, Nandigram and Lalgarh. She wanted to win all of these prestigious seats to ensure her ideological victory on the hotly debated issues of land acquisition for industrialisation, human rights, environment and economic policies. West Bengal CM Mamata Banerjee during an election campaign, ahead of state assembly polls, in Nandigram, Tuesday, March 9, 2021. Banerjee will be contesting in the elections from Nandigram. Photo: PTI

She won all three of them, not only in 2011 but also in 2016, and with comfortable margins. In 2016, she fielded Adhikari from Nandigram to make him a minister. In all these places, the TMC’s victory was so emphatic that the opposition practically ceased to exist. Bhattacharya, Manna and Sukumar Mahato had all their stints in Banerjee’s cabinet at different times. She was so angry with Chhatradhar Mahato that she did not agree when a committee appointed by herself recommended Chhatradhar’s release based on her promise of releasing political prisoners.

Now, the TMC has fielded a newcomer to the party from Jhargram. The candidate is Santali actress Birbaha Hansda, both of whose parents were MLAs from this seat (with slightly different geography under the name of Binpur constituency) before the TMC’s victory in 2011. And Chhatradhar Mahato is campaigning for her. He was released from jail in 2020 and joined the TMC.

During the anti-displacement agitation, Abu Taher and Sk. Sufiyan were Adhikari’s principal men. Now, they are to handle Banerjee’s campaign against Adhikari.

In Singur, political developments have occurred rather rapidly. Bhattacharya and Manna fell out soon after 2011. The factional feud and mutual mudslinging in public earned the TMC quite a bad name there, and that was one of the reasons attributed to the party’s poor performance in Singur in the 2019 Lok Sabha elections.

This time, 89-year-old Bhattacharya joined the BJP a day after the TMC named Manna as the party’s Singur candidate, besides nominating his wife, Karabi, from Haripal. He would not accept the party’s decision to reward Manna, said Bhattacharya, dubbing his younger colleague as “utmost corrupt”.

“I wouldn’t comment on him or what he says unless the party asks me to do so,” Manna said when asked about his feelings on contesting against Bhattacharya.

Bhattacharya’s journey in his new outfit may not be smooth, though. On Sunday, soon after the BJP named Bhattacharya as their candidate, protests broke out in Singur, with BJP workers expressing their anger and disgust at a TMC turncoat of the last moment bagging the ticket, despite the BJP having been in an advantageous situation based on the Lok Sabha election results. BJP workers gheraod a lodge where the party’s central leaders were staying and shouted slogans decrying the nomination.

“The party denied Lal Krishna Advani a ticket (in the Lok Sabha elections from Gujarat) because of his age, and here they are fielding an 89-year-old who has just joined the party,” said Krishna Bhattacharya, a BJP veteran from Hooghly district where Singur is located. “In trying to exploit the TMC’s internal feud, we might have got ourselves involved in the mud,” she said.

It is interesting to note that Mukul Roy, Banerjee’s one-time right-hand-man who joined the BJP in 2017, had recently said that the movement in Singur was a blunder of his old party. Adhikari echoed Roy on Singur but has not called the Nandigram movement wrong; rather, he is busy portraying himself as the real leader of the Nandigram movement in which Banerjee had a peripheral role.

It remains to be seen if Bhattacharya, too, would now call the movement against the Tata Nano plant a blunder, as that has been the BJP’s official stand on Singur – that the TMC drove away the Tatas and also failed to restore the farmland to its original status, forcing the people of Singur into a lose-lose situation.

“I have only just heard of my candidature. I will speak on this issue later,” Bhattacharya said on Sunday.

In Jhargram, the BJP’s district unit president and Jhargram seat candidate Sukhamoy Satpathy is warning the people against another round of Maoist upsurge citing Chhatradhar Mahato’s role in the TMC’s campaign.

“The TMC has purposefully let Chhatradhar Mahato out with the lighter punishment to revive the Maoist movement and those days of lawlessness,” he said.

Notably, the Maoist movement in Lalgarh and its surrounding areas that made headlines in the national media since 2008 abruptly died down after the death of Koteswara Rao alias Kishanji, the CPI (Maoist) politburo member and the banned outfit’s Bengal in-charge, in November 2011. Mamata Banerjee frequently reminds people of her success in ending the Maoist movement in the state.

Chhatradhar Mahato rubbished the BJP’s charges. “I joined the TMC because I wanted to fight against the BJP. They are the most dangerous force. But they have got scared of me and has started using the NIA (National Investigation Agency) to get me back to the jail by restarting old cases for reinvestigation.”

Incidentally, the NIA last year reopened two cases from 2009 and 2010 and has been petitioning the court to take Mahato into custody for interrogation. A legal battle is going on in this regard.

In Nandigram, Adhikari has vowed to defeat Banerjee by a margin of 50,000 votes.

“He himself will lose the elections by a margin well over 50,000 votes,” retorted Sk Sufiyan, Banerjee’s new pointsman for Nandigram.

The Left Front, whose policies triggered the disturbances in Singur (2006), Nandigram (2007) and Lalgarh (2008), had lost ground in all these places after the TMC’s 2011 victory. They do not seem to have any chance in any of the seats this time either.

What they have tried to do is to bring a few fresh faces, fielding young candidates from all these seats – student leader Srijan Bhattacharya from Singur and youth leaders Minakshi Mukherjee and Madhuja Sen Roy from Nandigram and Jhargram, respectively.

The CPI(M)’s stand on these issues has not changed though. How the TMC ruined the prospects of Singur, and of the whole state, by misleading the people against the Left Front’s industrialisation drive, and how the TMC “utterly failed” to generate employment during its regime, will be one of the central themes of Bhattacharya’s speech, the student leader said.