Making her Martyrs' Day speech almost entirely in Hindi and English, the TMC chief held her phone up and showed that its camera was taped, reflecting a fear of snooping.

Mamata Banerjee holds up her taped phone in a reference to the Pegasus row. Photo: Screenshot from official video link

Kolkata: West Bengal chief minister and Trinamool Congress chief Mamata Banerjee called for all opposition party leaders to unite against the Bharatiya Janata Party ahead of the 2024 Lok Sabha election, amidst the row that has erupted since 17 media organisations, including The Wire, reported on attempted and successful surveillance efforts with the use of the Pegasus spyware on several Indian figures.

Banerjee was speaking at the annual Shahid Dibash (martyrs day) function of the TMC. Significantly, she made most of her speech in Hindi and English, signifying intention to reach a national audience. She also ended the speech with “Jai Hind. Jai Bangla. Jai Hindustan”. The last bit is new and indicates a shift in the TMC’s political outreach plan.

“I don’t know what will happen in 2024. But all the opposition parties need to start working together, and must start right now. Our freedom is in danger today. We have two and half years for the election. Every day matters now. We can’t forge alliances just ahead of the elections. Democracy is in danger. We need to oust BJP to save the country,” Banerjee said.

Banerjee’s party won in the assembly election, which was hotly contested by BJP, recently.

“Our phones are getting tapped. BJP is using Pegasus to spy on us. They have demolished all democratic institutions in the country. Today I cannot talk to any other political leaders, I cannot speak to my own party leaders. I can’t speak to Chidambaram-ji, Sharad Pawar ji, or the Shiv Sena’s chief minister because our phones are hacked. Pegasus has captured phones of all opposition leaders, their own ministers, bureaucrats, judges, election commission, media personnel. They have hijacked all the pillars of democracy. BJP is demolishing democracy,” she said.

Banerjee held her phone up and showed that its camera was taped, reflecting a fear of snooping. She appealed to the Supreme Court judges to take suo motu cognisance of Pegasus snooping row.

“BJP took Rs 3.75 lakh crore from the public pocket. Where is it going? ‘Spygiri’ is going on. BJP wants a surveillance state. They are bulldozing democracy every day. This scandal is bigger than the Watergate. They will not spare anyone,” Banerjee said.

For the first time, the Shahid Dibash event was organised outside Bengal, but due to the prevailing COVID-19 situation, this time the event was held virtually. The party organised screenings in states like Gujarat, Delhi, Assam, Uttar Pradesh and Tripura.

On this day in 1993, 13 people were killed by police, then under the Left government in Bengal, during a protest rally by the West Bengal Youth Congress under Banerjee demanding that voters’ ID card be made the sole document for voting.

TMC, this time, also invited various leaders from opposition parties. Several senior opposition leaders turned up at the Constitution Club in New Delhi to listen to Banerjee’s speech, like NCP’s Sharad Pawar, Congress’s P. Chidambaram and Digvijaya Singh, and Samajwadi Party’s Ramgopal Yadav were present at the event in Delhi. 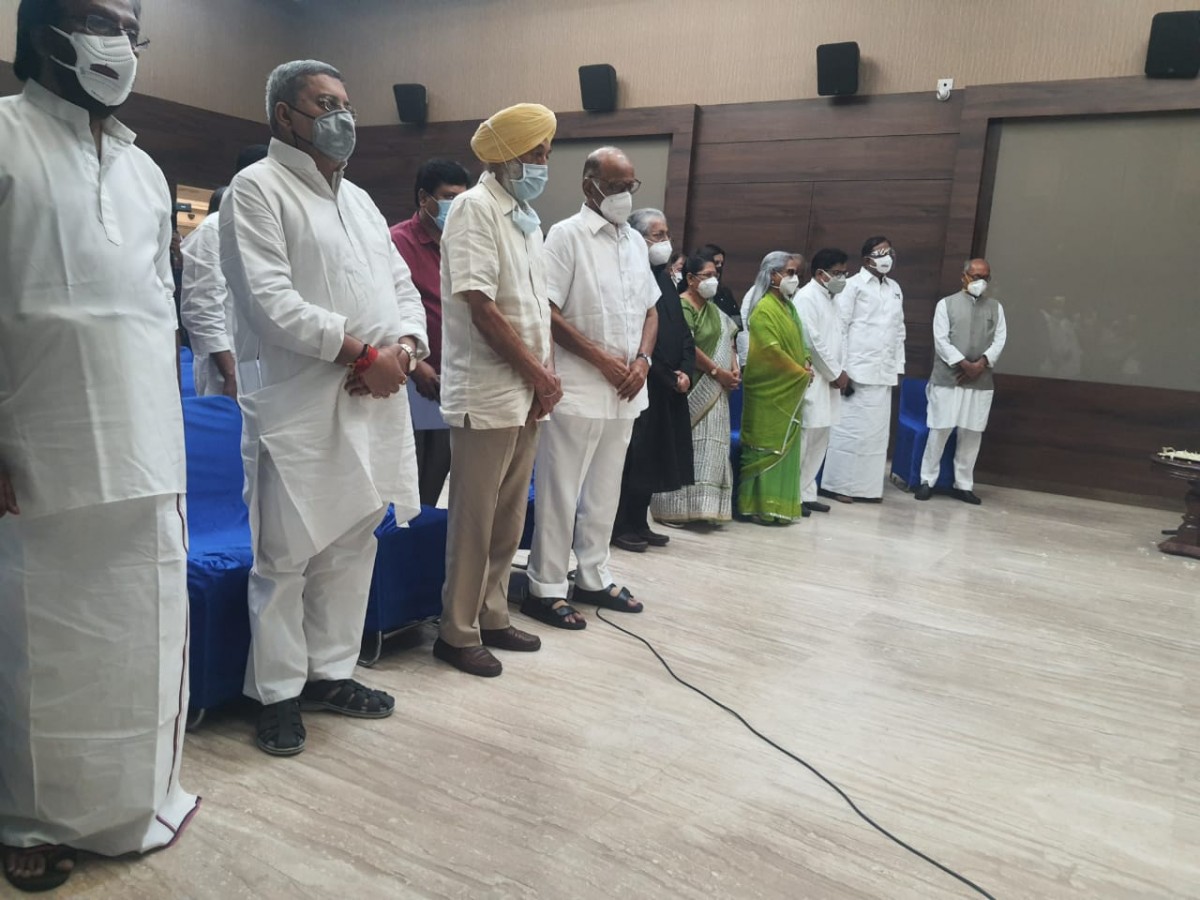 Bringing up issues like the three contentious farm laws, COVID-19, the state of the Indian economy, inflation and price rise of petroleum products and natural gas, Banerjee targeted the BJP-led Union government.

“My only interest is to save India and the people of India. Good governance has no alternative but BJP only wants conflicts and sectarianism. BJP failed in managing COVID-19, it was a monumental failure. I urged opposition leaders to stay strong and perpetually pursue the fight against all these issues,” she said.

At the end of her speech, she highlighted her flagship welfare schemes like Kanyanshree, Rupashree, student credit card, allowance to farmers, free ration to all etc. and said, “Gujarat model is not the model for India, Bengal is the real model.”

Ahead of Banerjee’s speech, TMC workers were detained from Kailash Nagar in Tripura and Mamata Banerjee’s posters and hoardings were removed from Geeta Mandir bus terminus at Ahmedabad in Gujarat.