With Two Recent Moves, Mamata Banerjee May Have Hollowed BJP's Campaign in Bengal

The TMC government's decision not to implement PM Kisan and Ayushman Bharat in the state had been the BJP's primary poll plank. 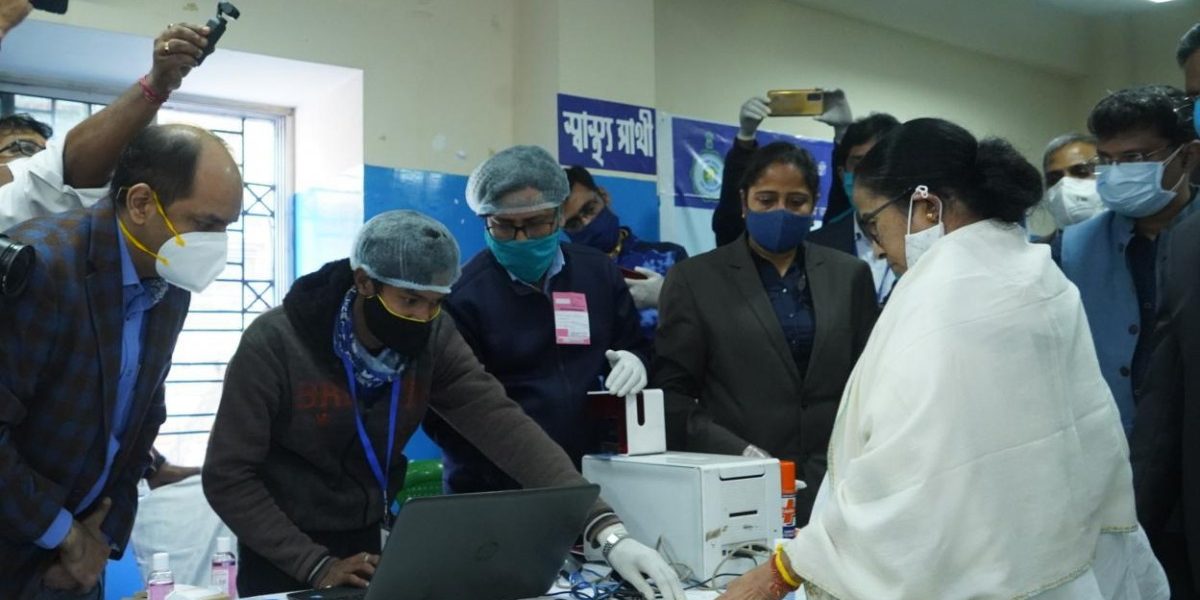 Mamata Banerjee stood in the queue and collected her own Swasthya Sathi card on Tuesday. Photo: Snigdhendu Bhattacharya

Kolkata: With two moves in two months, Bengal chief minister Mamata Banerjee is likely to blunt, at least to some extent, one of the Bharatiya Janata Party’s (BJP’s) top campaign issues against her – not allowing the Ayushman Bharat and PM Kisan Samman Nidhi schemes in Bengal.

First, in December, she extended the benefits of the state’s own health insurance scheme to every resident of the state, making its coverage wider than that of Ayushman Bharat. Second, on Monday, she announced she would allow the implementation of PM Kisan Samman Nidhi, which provides Rs 6,000 cash benefits per year to farmers, despite the state having its own cash benefit scheme for farmers.

On December 25, Modi said while addressing farmers of the country from New Delhi, “Seventy lakh farmers of Bengal are not being able to avail the benefits of the scheme [PM Kisan]. They are not getting the money because of the political interests of the government in Bengal. The state does not need to pay a penny. The money will be going from the Centre. Many farmers have directly written to the Centre. But they [the government] are not even acknowledging them [the farmers]. The government there has blocked those applications. I am livid because of it.”

This allegation has been made time and again, and Shah repeatedly raised the issues of PM Kisan and Ayushman Bharat during his visits to the state in October, November and December. “I fail to understand what harm have the people of the state done to Mamata Banerjee that she is depriving them of these benefits?” Shah had said during his last visit.

On January 4, Banerjee said in Kolkata that she had spoken to Union agriculture minister Narendra Singh Tomar over the phone. She claimed she asked Tomar why the Centre was bypassing the state in transferring the cash benefits, but Tomar insisted that the cash would be sent directly to the beneficiary’s account from the Centre.

“They are trying to undermine the state by excluding it from the implementation. Nevertheless, I will not object if people are to benefit. The Union minister said they have received online applications from many farmers in the state and the applications needed to be verified by the state. I said we have no knowledge of these applications because none of these farmers contacted us. We will verify the list once it comes to us,” the chief minister said.

She added that the state’s cash benefit scheme for famers was still better. “The Centre’s scheme is only applicable for those owning more than two acres of land, leaving the beneficiary number at around 20-21 lakh, while the state’s scheme gave money to owners of small plots as well, with benefactors numbering around 70 lakh,” she said.

However, it was still not clear if those who will be receiving funds from the Centre will also remain eligible for receiving the state’s funds.

Political observers believe these two moves are smart, as one of the BJP’s primary campaign promises for Bengal was that it would implement Ayushman Bharat and PM Kisan as soon as it came to power. Swastha Sathi, the state’s own cashless health insurance scheme, has already turned out to be a hit, with scores of people queuing up at government camps to get themselves enrolled.

On Tuesday (January 5), Banerjee herself collected her Swastha Sathi card from the camp designated for her residential area of Kalighat in south Kolkata.

The Trinamool Congress had so far been saying that the state had similar schemes, with better facilities, that predated the Centre’s schemes.

“Allowing PM Kisan is a smart move. At least she will not lose anything by doing this. One the other hand, the Centre might find it difficult to transfer the cash to the beneficiaries before the assembly elections,” said columnist Suvashis Maitra.

Filmmaker and political commentator Aniket Chattopadhyay, who himself owns farmland and looks after the farming, agreed. “It was being portrayed that Mamata Banerjee’s ego battle with Narendra Modi was affecting the farmers of Bengal. Now that she has allowed it, the BJP’s campaign on this issue will lose some steam for sure,” Chattopadhyay said, adding, “She anyway has her own scheme running.”

He added that the state’s ruling party has already initiated adopting a unanimous resolution in the assembly against the Centre’s controversial farm laws, against which farmers are agitating in Delhi. The Left-run Kerala government has already passed a similar resolution.

Chattopadhyay also said that the Mamata Banerjee government would have the BJP nearly trumped on the famers’ issue if it decides to legalise the minimum support price (MSP). “I have heard the government is considering legalising the MSP. If this finally happens, paddy growers will earn a lot more and that would most likely help Mamata Banerjee’s electoral interests,” he said.

A senior TMC leader said the decision to allow PM Kisan in Bengal came after political strategist Prashant Kishor, whom the party has appointed as an advisor, intervened. Kishor reportedly insisted that allowing the scheme would do Banerjee no harm, but not allowing it could hurt the party.

“Kishor has been telling the party’s top leadership that people like to get whatever is coming to them, irrespective of who it comes from, and that they would not understand the fine differences between the two schemes. Therefore, disallowing the Central scheme could antagonise a section of people who thought the Centre’s scheme would have benefited them,” said the senior TMC leader who did not want to be identified.

A minister in Banerjee’s cabinet said that the government might do even better by making the schemes optional – that is to allow farmers to choose either of the two. “That way, the popularity of the two schemes would also become crystal clear,” said the minister, adding, “However, it is the call of the chief minister.”

The BJP, of course, is not going to stop attacking the TMC government on this issue. “They finally did it but it’s too late. She must first apologise for hurting the interests of the farmers so long. She must apologise for the money that the famers missed out on,” said BJP’s state unit general secretary, Sayantan Basu.

Basu added that the acceptance “at the final hour” before the elections has also come with another hidden motive.

“The elections are only three-four months away. The Centre will send the list, the state will take time to verify so many applicants and send it back to the Centre, and then the Centre will have to make allotments accordingly. It’s all going to take time and there is a chance that the Centre’s money may not reach Bengal farmers before the elections,” Basu said.