Anger Has Turned to Fear and Resignation in Majura, Epicentre of Gujarat's Anti-GST Protest

Many textile traders who were involved in the protest say they will vote for the BJP again because the Congress fielded an unknown candidate and was not able to win their confidence. 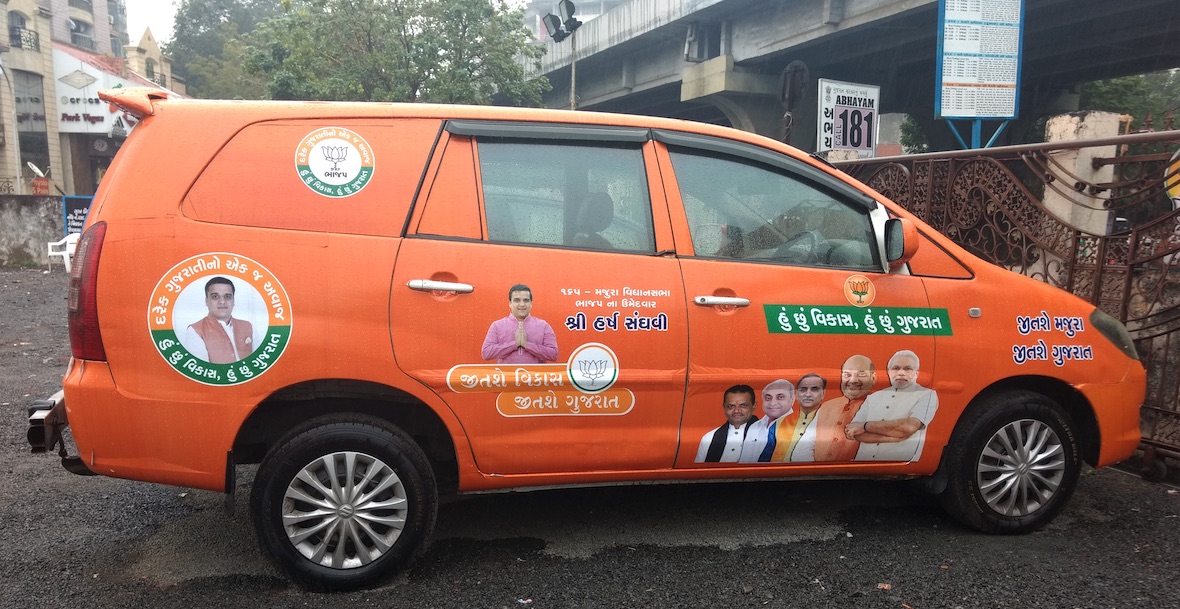 Surat: In July this year, Surat, the economic capital of Gujarat, witnessed something nobody had expected – lakhs of textile traders out on the streets protesting against the Goods and Services Tax (GST) regime. Never before had these traders, who are usually concerned with nothing but their business, showed their anger against a ruling party – much less the BJP, which has always had their loyalty.

The epicentre of the massive protest that rocked the ruling party was Majura, a constituency in Surat that came into being after the seat delimitation of 2008. Five months later, with the elections tomorrow (November 9), not only has the protest faded, so has the traders’ anger. The textile traders who were at the forefront of the struggle are now helpless in the face of the unprecedented losses they are suffering – to the extent that they are willing to vote for the BJP yet again, hoping the party will get them out of the mess they are in.

“Ashok Kothari, the Congress candidate from Majura, is not a known face. He shall be facing Harsh Sanghvi, the sitting MLA whom the BJP has re-nominated from the constituency. Kothari is a not a Gujarati and not really a textile trader either. He is believed to be a business aide of Dhanpat Jain, the Congress candidate who lost to Sanghvi in 2012. Both of them are close to Tushar Chowudhary, Congress MP from the Bardoli seat,” said Hitesh Sanklecha, a 43-year-old textile trader who became the face of the anti-GST protest and was instrumental in organising the mammoth rally in Surat. 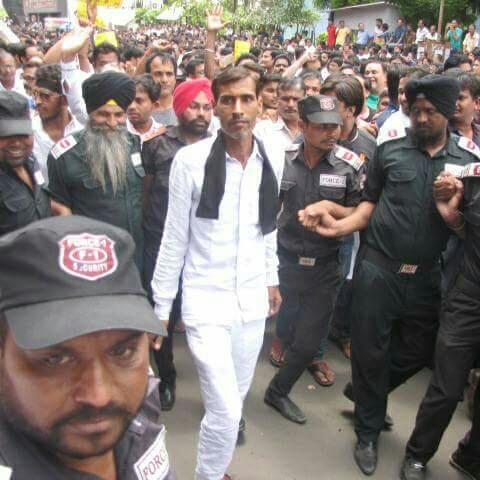 About 90% of Majura’s electoral population is associated directly or indirectly with the textile industry, and a handful of others with the diamond industry. The seat has about 2.45 lakh voters of which about 1.25 lakhs are Gujarati, about 34,000 are Marwari (all textile traders) and about 70,000o are from other parts of North India (including Bihar, UP, Rajasthan and Punjab).

“Majura is the most important seat in Surat. The turn of events in Majura impacts the other constituencies in Surat. Ninety percent of the voters in Majura are textile traders, who as employers have an influence on workers who are spread in at least five constituencies. About 30 lakh people are associated with the textile industry in Surat. Yet Congress fielded a weak candidate in the constituency,” said Sanklecha.

“There was an anti-BJP wave, Congress could have benefitted from it if its local party leaders had worked to consolidate voters and turn the anger against BJP into votes,” said the textile trader who was on hunger strike for 22 days during the protest.

“Textile traders were such a loyal vote bank for the BJP that Majura was considered to be the safest seat for the party. Yet we protested because the new tax regime hit our bread and butter. The small and medium traders suffered unprecedented loss. We have no hopes of recovery either. The small and medium traders are the ones who are angry, but they are also helpless. The big textile traders however, who weren’t so affected, remain staunch supporters of the BJP,” said another textile trader who was a close aide of Sanklecha during the protest and now fears backlash from the ruling party. “We had thought of not voting for the BJP, but then Congress fielded someone whom nobody knows. We don’t understand why the Congress would not field a strong, experienced candidate. If they had to field a textile trader, there were better choices.”

The Congress had reportedly approached Sanklecha and mulled over whether to field him as the Majura candidate. Sanklecha is a Jain textile trader and a resident of Majura. It was Sanklecha’s 22-day hunger strike, organising power and popularity that infused life into the anti-GST movement. When Sanklecha decided to break his hunger strike, the movement ended too.

“In 22 days, the government tried every trick to break the movement. They deployed police in heavy numbers, put surveillance on me and my family, and picked me from the protest spot and tried to force-feed me. When I still refused, doctors injected me with fluids so that my hunger strike ends. We could have had the government on its knees if not for some traders who broke the movement,” Sanklecha told The Wire.

“The big businessmen associated with the Federation of Textile Traders Association jumped into the picture by forming the GST Sangharsh Samiti. While on face of it they supported the movement, they were the ones who actually broke it. The government spoke to them as they travelled till Delhi to meet big leaders of the BJP. They were not the voice of the small and medium traders. Nobody (from the government) spoke to us; we wanted the government to hear us at least once.”

“The Congress candidate from the seat is not strong enough to channel the anger of traders into votes,” said Tarachand Kasat, a textile trader who was secretary of the GST Sanghash Samiti and is a senior Congress party member.

While Kothari had been a Congress worker for years and is involved in the embroidery business associated with the textile industry, Sanghvi comes from a family of diamond traders and rose within the saffron party’s hierarchy at a young age.

When the Majura constituency went to the polls for the first time in 2012, both the Congress and BJP had fielded Jain candidates. However, Dhanpat Jain, a veteran Congress leader, lost to Sanghvi by more than 71,000 votes. That was Sanghvi’s first election.

This year, sensing the ire of textile traders, the BJP has left nothing to chance. An array of RSS and BJP members have come from all over the country to campaign for Sanghvi. Most of them are from the Bharatiya Janta Youth Morcha (BJYM), the youth wing of the BJP.

He has star youth campaigners like BJP Delhi spokesperson Tajinder Bagga, chief minister Vijay Rupani to woo the Jain electorate and Sambit Patra, who conducted programmes like ‘Chai pe Charcha‘ in the constituency.

“Sanghvi was a teenager when he accompanied L.K. Advani in 2011 to hoist the national flag at Lalchowk in Srinagar. Later he became a member of the RSS and was taken into the BJP’s youth wing. He rose higher in the hierarchy soon to become the national general secretary of BJYM first and then national vice president of BJYM and in charge of the Maharashtra unit. In 2012, he contested the election for the first time and won,” said Ashutosh Desai, who has been associated with the RSS for the last 30 years.

“RSS has a very strong hold in this constituency,” added Desai.

“We have about 14,000 active RSS workers for just 14 booths in this area,” said Mukeshbhai Pujara, who has been associated with the BJP for 22 years. 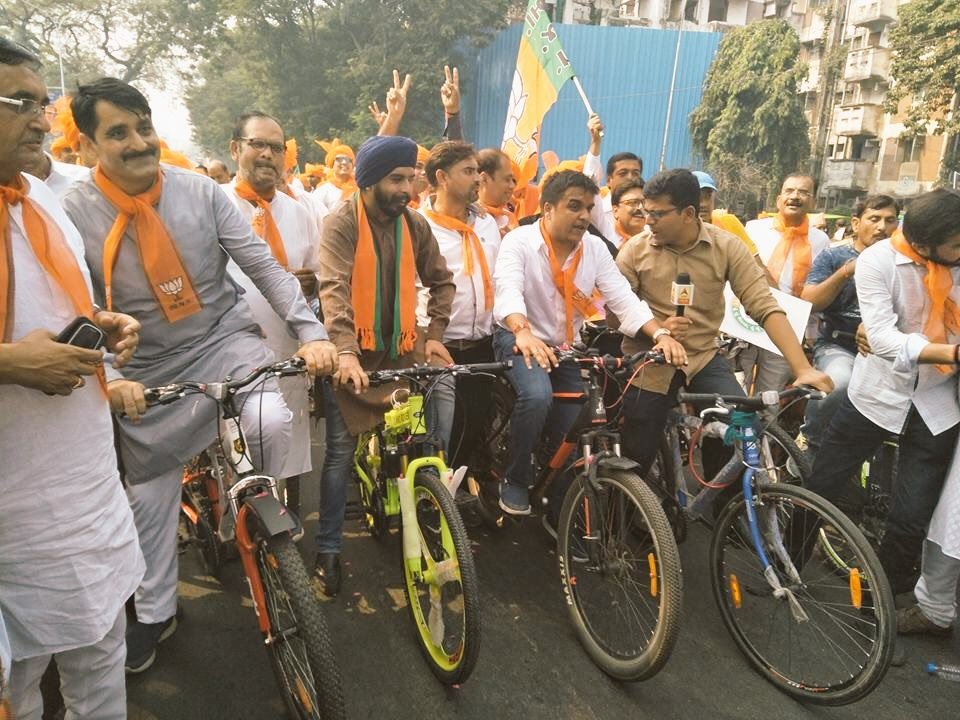 “Vyapari logon ko protest ka culture nahi hai, wo to majboori me karna pada. Vyapari aaj bhi kattar hai apne dharm aur jati ko lekar. Unke liye BJP Hindu party hai aur Congress Musalmano ki party (Traders have no culture of protesting, they protested as they were left with no choice. Even today, religion and caste is important for the traders. For them, the BJP is Hindu party and the Congress is a party of the Muslims),” said a trader who runs a garment shop in the City Light area of the constituency.

“Textile traders who came out on the streets will likely vote for the BJP despite being dissatisfied. The business is running at a loss of 40% still. Traders have sold looms in scrap. I had 54 looms of which I had to sell off 20 looms. Each loom worth Rs 1.25 lakh had to be sold for Rs 20,000 only,” said Sanklecha.

“The small traders can hardly run their household now. The medium traders can barely earn enough to pay for their establishment costs. They fought with us, the police lathi charged us, BJP leaders like C.R. Patil, MP from Navsari, put political pressure while the movement was at its peak – we faced all this but in vain. Today the traders stand defeated and helpless, and are concerned about getting back in the business. Some small traders have even started looking for other avenues, but that’s not easy either. Five months ago there was anger and things were different. If the election had been conducted just after, scenario would have been different,” he added.